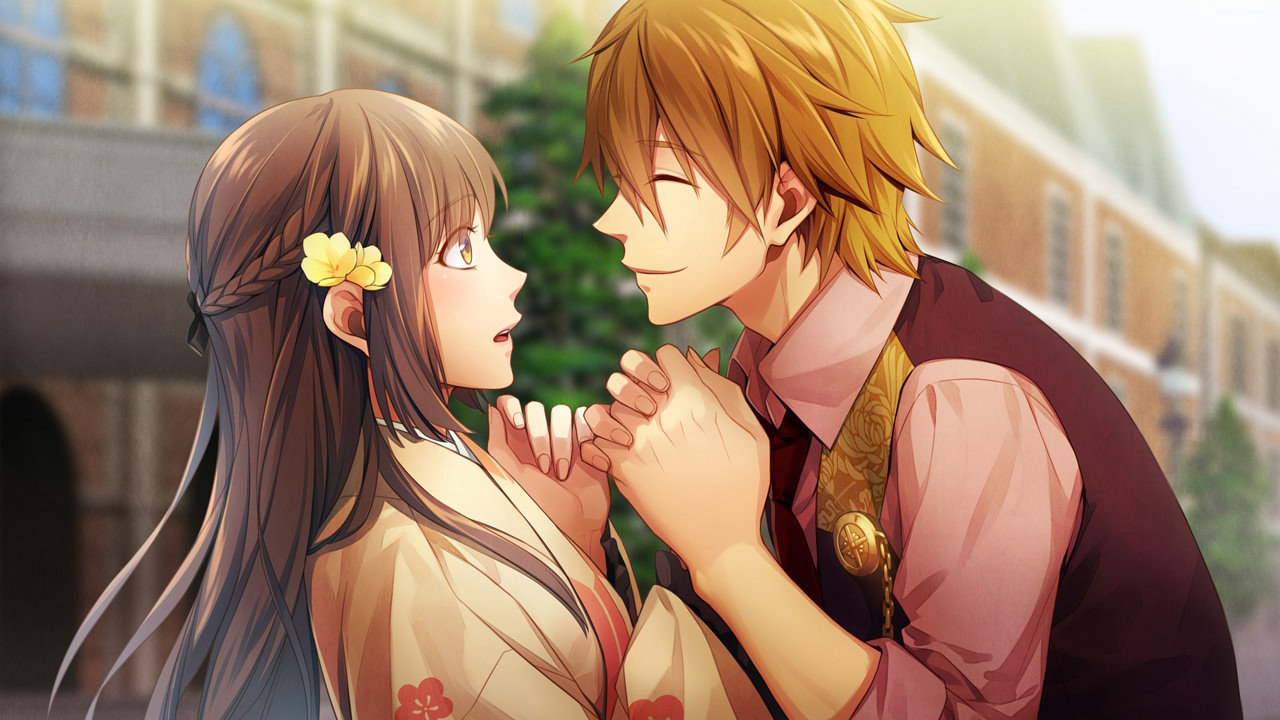 Romanticism is a concept that has been around since the beginning of the eighteenth century; although other periods within history can also be identified with such a notion, such as the French Revolution, English Literature and the Japanese Taisho Roman eras. Through artistic forms, audiences are able to discover a connection with these periods in history and their romantic ideals. Although the classics still provide an outlet for many people, more modern concepts have also provided a form of romantic entertainment, such as Mills & Boon and the Bridget Jones series. With the new form of media within digital entertainment, romantic novelisation is finding a new audience with its interactive properties with titles such as The Men of Yoshiwara, Amnesia Memories and Nightshade.

Developed by the OperaHouse Corporation and published by D3Publisher, The Charming Empire is the latest romantic visual novel and dating sim to hit the Nintendo Switch. Based around the time of the, aforementioned, Taisho Roman period in Japanese culture, this digital story follows the exploits of Amane Kosaka, a young woman who has been brought up by her grandparents within the countryside and is suddenly summoned to join her brother, the current ruler, to reside within the palace of the central city. With a child-like innocence, our young heroine becomes emotionally embroiled within the lives of five male counterparts set against a backdrop of rebellion and civil unrest revolving around a growing unpopularity with her brother’s rule and political beliefs.

The main story is divided into five categories; one for each of the male roles and are entitled by their names: Yoshimine Kei, Koichiro Sera, Tanba Toki, Togawa Kagemitsu and Amazaki Soshi. With around fifteen chapters for each story, this visual and interactive novel can boast around a total of ten to fifteen hours’ worth of entertainment value. Presented in an art-style of digital paintings and backdrops, the story unfolds within a series of subtitled texts with Japanese voice-overs. Although professionally dubbed, this voice-acting is largely wasted in its western release, although it is possible to gauge some emotion through the pitch of presentation of the speech. The artwork is well presented, with some nice looking locales and character models. However, all of the visual elements of this title are repeated often, a little too often for my liking, and soon become tiresome with their over-use. 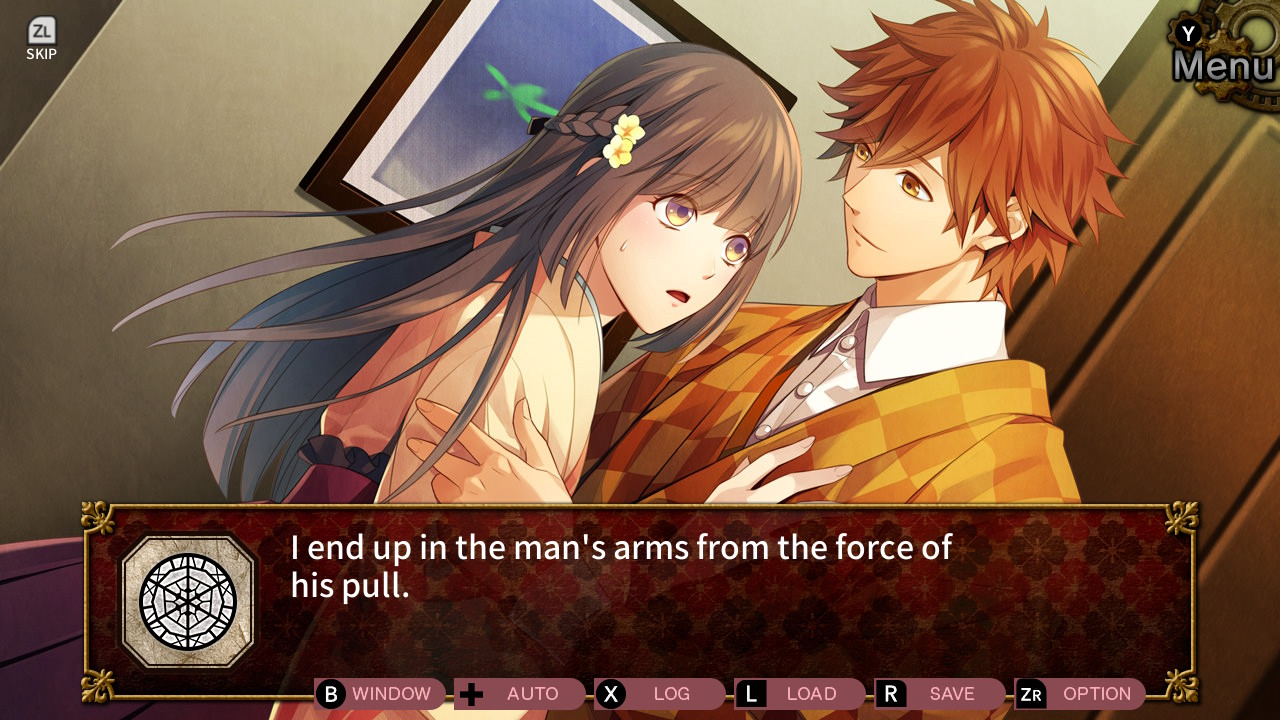 Ported from a PC and mobile release, the textual presentation comes in short, sharp bursts that presents the story in a small window of one or two lines at a time. This ultimately, leads to style of reading that feels disjointed and quite difficult to find a flow within the text. Although well translated with no apparent mistakes in its lexis and register, its description of thoughts, events and language contain a rather basic premise in its execution which doesn’t make it a particularly memorable read; this is also hampered by a central story which isn’t particularly interesting or exciting. Each of the five separate stories all focus around the same, central themes with each one running concurrently with each other. Despite this amalgamation of the plot lines, none of the central characters appear in each other’s stories, which seems a bit odd considering the closeness of proximity that their timelines run in.

Occasionally, the story pauses to present a choice on the decisions that you feel that the protagonist, Amane, should make in a given situation around conversation. Given two choices, one of them presents an increase in the emotional value of the characters, the other appears to have no bearing or meaning from what I could tell; although all the endings that I encountered were ‘normal endings’, but no matter what I tried, I was unable to produce any variation in this. These sections were very few and far between though, giving a feeling of disconnection with being more involved within the story. I found the speed in which the text presents itself rather slow, although pressing the A button gave it an instant presentation. However, the whole experience just felt like a one button relationship. The options menu allows you to customise this element of the gameplay, but setting the speed to fast and the text presentation to automatic, produced an effect that flashed the sentences up on the screen so quickly that you were unable to read one word, let alone the whole sentence; something that I found to be a very odd inclusion in the mechanics of its approach.

It should be noted that this is a title that is primarily intended for a female audience; something that I find slightly derogatory as most of the girls I know are quite at home within the arenas of Rocket League or the battlegrounds of Call of Duty. Saying that though, I am sure that there are fans of this genre of gaming, regardless of sex. Unfortunately, as a man, this review has been written by its unintended audience and from a male perspective, although as a reviewer I have given this title an unbiased view that is based on gameplay and presentation, rather than any gender-based inequalities. However, from this perspective, I did find some of the portrayals of the central characters rather creepy in their approach to the opposite sex; something that I found quite disturbing, especially in this modern-age of, supposed, equality; although there were also instances that were charming and heart-warming and I could see its appeal in a romantic setting. 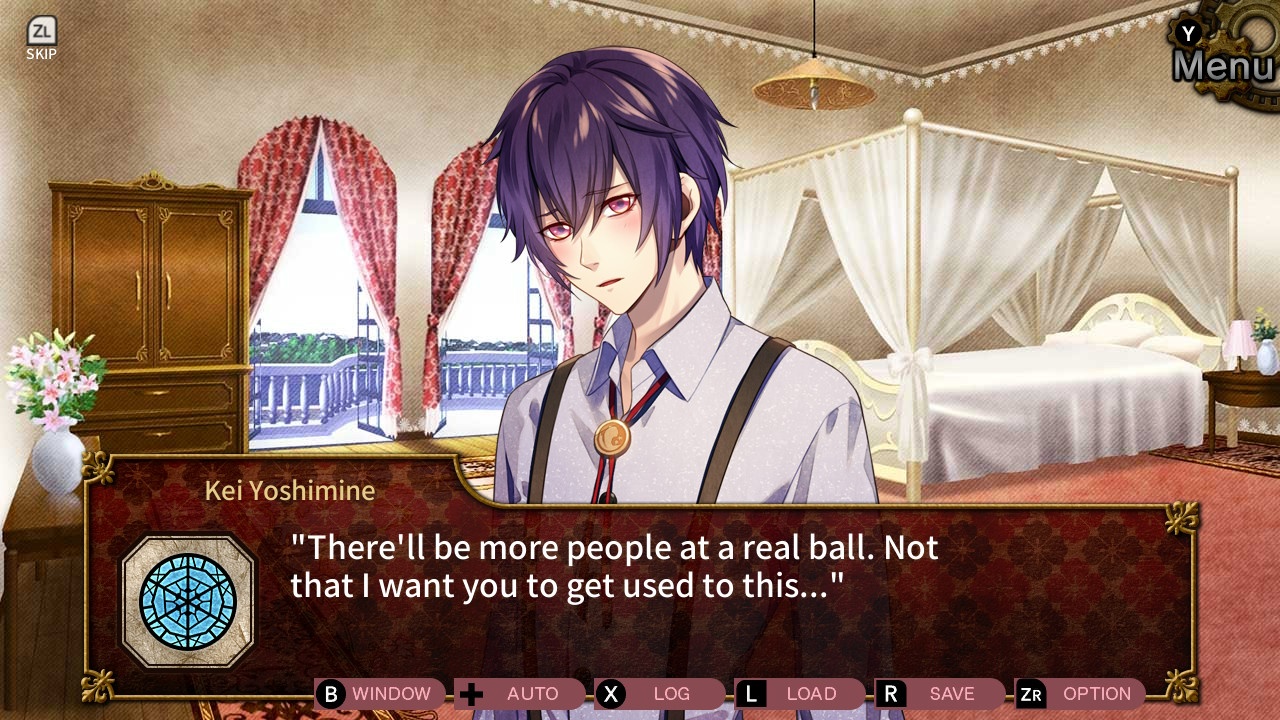 Despite its Japanese voice-overs, The Charming Empire also contains some sound effects and a soundtrack that loops tirelessly. However, with its limited selection of tracks, this background music soon becomes monotonous, as well as quite distracting when trying to follow the text of the story. There is an option to turn the music off, however, this also mutes the sound effects but, overall, does present a better experience. One nice inclusion is the option to save your progress at any time, giving the title a freedom to be played at any time, whether you’re looking for a casual experience or something more thorough.

Overall, Its presentation values and execution do offer a title that I am sure will appeal to some people out there; especially fans of Japanese culture and romantic reading. From a gameplay, or interaction, point of view, I found the mechanics of the game to be very shallow with no depth or immersion into its mechanics or storylines. Personally, I find this style of digital entertainment a strange inclusion on the Nintendo Switch as, technically, this isn’t really a game and is a format that I feel sits better on mobile devices, despite the Switch’s portability. It’s not a bad title, then again, it’s not a particularly good one and I felt that the whole experience was merely that of an average one and was, unfortunately, a title that failed to charm me with its stories of romanticism.