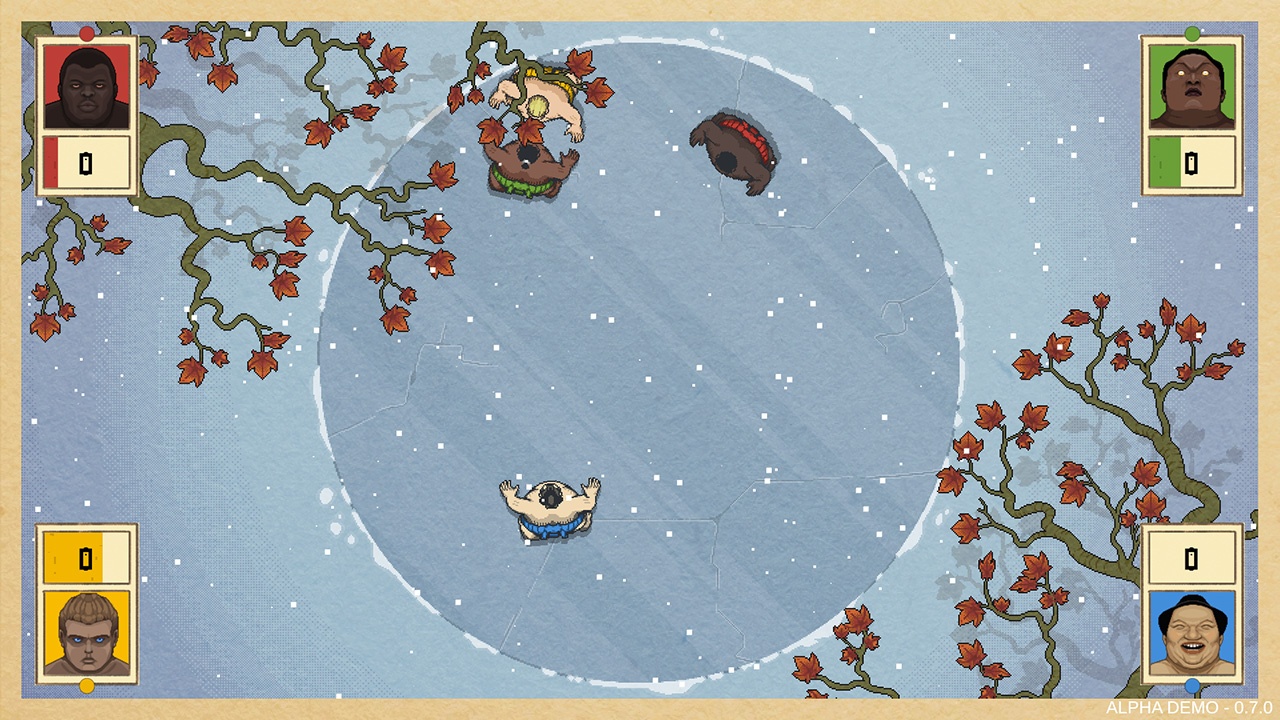 Sumo wrestling is one of those sports that I can appreciate and even respect but not fully “get.” There’s this wild combination of athleticism, tradition and fascination that culminates into 400 pound men slamming into each other and Japanese nationals crying tears of joy when the yokozuna title returned to a native last year. The objective of “knock the other guy out of the ring” seems simple enough, but there’s so much in terms of physics, routine and, I imagine, strategy that I can’t fully grapple the implications. So I’m glad that a lone developer has taken it upon themselves to take this hallowed sport and turn it into an honestly fun and simple game. Welcome to the Circle of Sumo.

At the core, Circle of Sumo is as simple a premise as you could hope for. You are one of up to four sumos on the screen, and you want to knock the other sumos out. Plain and simple. To help you, there are a variety of button combinations that allow you to run, charge, dodge and counter, though, like real sumo wrestling, you won’t be kicking or throwing fireballs. Getting into one-on-one matches can be pretty intense, and having four sumos go against each other results in a lot of confusion and mayhem. Add in that each sumo has different attributes, such as power, acceleration and spirit, and you have a lot of potential matches lining up in a simple, sane environment. 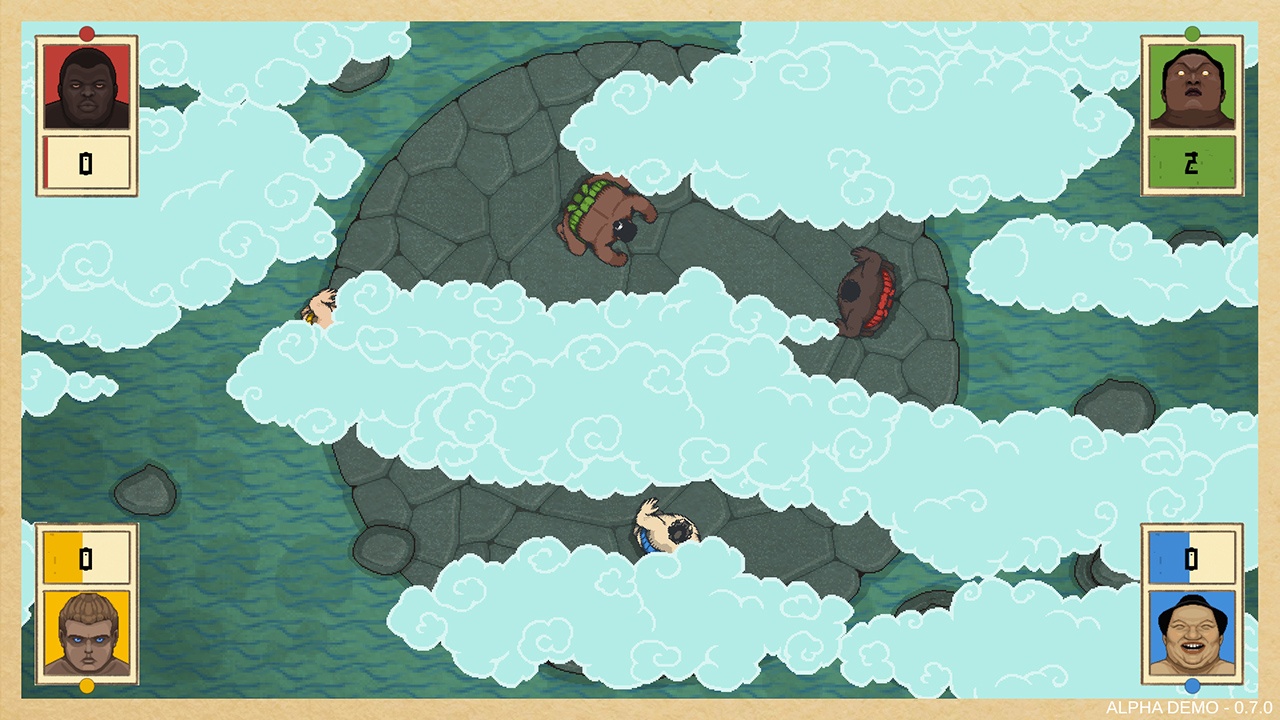 Thankfully, Circle of Sumo is neither simple nor sane. You don’t simply fight at the Budokan in front of the emperor, several drunk business men and some foreigners who overpaid for tickets. You take your sumo quest around the world and beyond onto some of the strangest arenas imaginable. You fight atop a massive turntable that keeps you from properly orienting. You fight on the roof of a castle turret and maybe you fall through the trap door that occasionally opens. You decide to fight in traffic, because sumo waits for no one, and that might prove to be a bad idea because cars are fast. You even fight on an icy rink beneath frozen blossoms, because everyone loves Oren Ishii’s fight more than any other moment in any other Quentin Tarantino film. You have so many environmental hazards and clever setups that the simplicity of the game goes mostly unchecked because you’re caught up in the moment.

Now, you can’t simply hove into all these new arenas right away: you unlock them with coins. Ah, dreaded coins! You can get coins from the extra modes, which, by themselves, are a pretty fun damn time. The sumos can compete alone or in teams on a variety of events and situations, such as sumo soccer, sumo hockey and sumo hurdles. There’s also a couple of survival modes that are single player, where you have to keep ahead of a constantly scrolling screen while navigating traffic or jumping (but clearly not jumping) from log to log on a raging river. The soccer and hockey are damn fun in a group environment, because physics does not favor the sumo, and thus it’s hilarious to try and get your bearings on the navigation and handling of the ball/puck. Not to mention all of the aforementioned controls exist here without the addition of “shoot” or “kick,” so you gotta make due with what you have. Hurdles are okay but dreadfully boring after a few rounds. The neverending survivals are the best way to get coins, in my opinion: here, cars can be moved by the bigger sumos, and those who know their sumo well can dash from log to log and make the big bucks. Oh, and the game starts you with 5000 coins, so you can unlock a few arenas right away to get a taste for what’s to come. 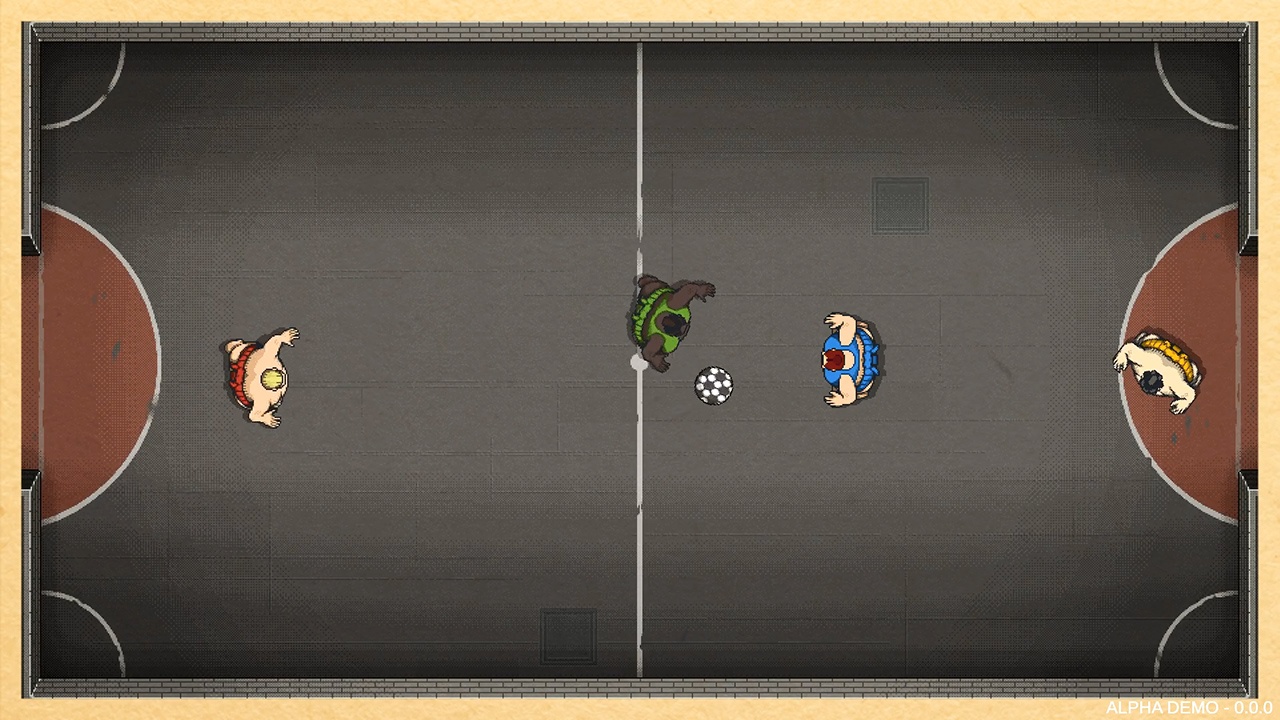 There are some things that Circle of Sumo does really well. Firstly, it’s got a good, simple art style to match the concept and execution, and the music is spot on to capture the faux sumo environment of it all. All the buttons port fast and well to a single JoyCon, so being able to bust out a two player game is effortless, and a four player game is more a concern of finding people than finding controllers. Each round is over in a matter of seconds, so you can bang out multiple matches in the blink of an eye without even considering what else needs to be done. Despite all the simplistic tropes I keep harping on, it’s not a game that you can get bored with easily with friends: there’s always a different way to try and win, a different approach to how to best sumo someone else out of the ring, from taunting them into a false dash to patiently waiting for the world to take them out.

On the other hand, since the multiplayer is the crux of the game, it’s also kind of a bore when you don’t have other people to play with. Your sole intent in solo player mode is to kill time and build up coins to make multiplayer more interesting. If you genuinely don’t have another person to play with, Circle of Sumo is dead in the water before you even finish downloading it. There’s no online play or even local play, so it’s seriously a matter of couch co-op and nothing else. Don’t get me wrong: that makes perfect sense with this kind of party game and the resulting reactions from friends and family who win and lose. But it does alienate those of us who purposely like to be secluded during our gaming sessions and would prefer online multiplayer to face-to-face interactions that mean I have to clean and find somewhere to put all these kid’s toys.

Closing in on the second year of the Switch’s life, it’s ridiculous to see how many titles have come out for this console in such a short time. I love to see confident, new indies like Circle of Sumo trot out and attempt to grab a share of the market, and I wish them luck, I truly do. It’s novel, it’s fun, but it needs extra players to stay relevant, and I’m concerned that, with all the larger titles that are releasing at the same time, Circle of Sumo will simply languish in obscurity until a big enough sale happens. Still, if you like sumo and love party games, then this is a 200kg fit.

Sumo’s can do anything they put their mind to, including participate in some truly bizarre but endearing party games.