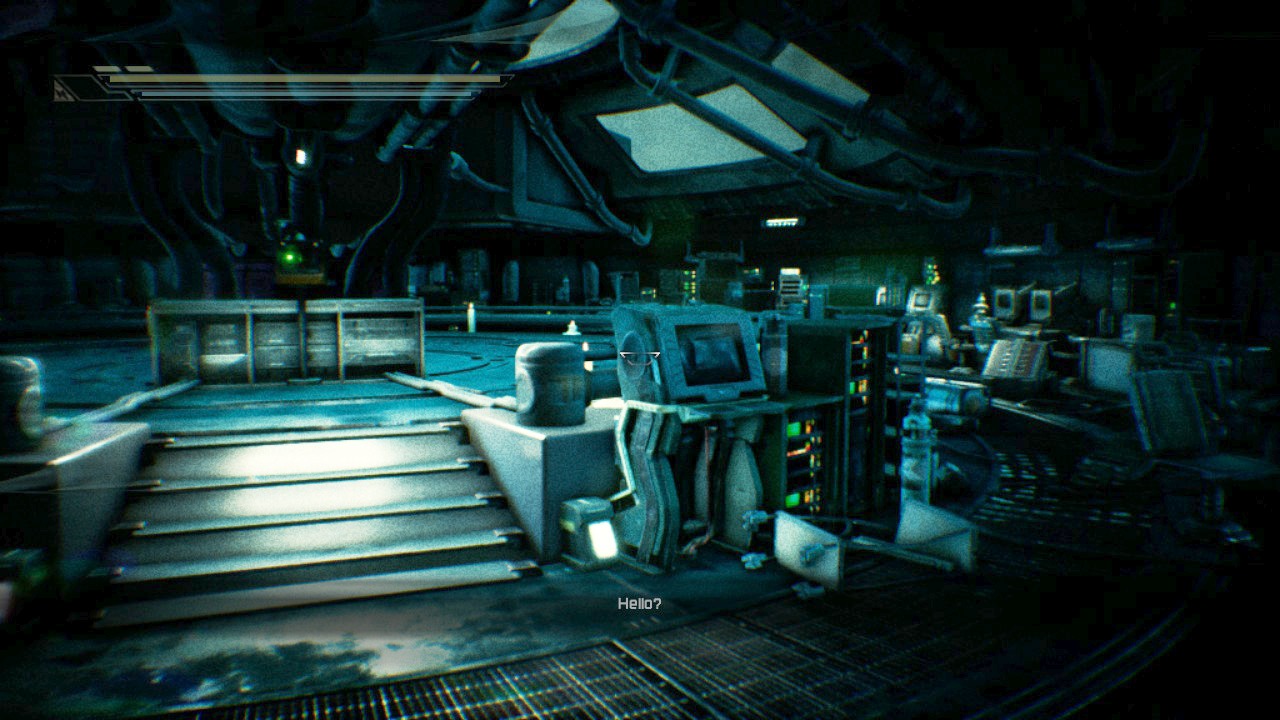 You know, if I was ever presented with the opportunity to go into space, I’d probably say thanks, but no thanks. There are far too many stomach-bursting aliens, evil empires and abandoned space stations, infested with your worst nightmares, to make it worth my time. Instead, I much prefer to get my sci-fi fix through movies or the emulation that video games provide. Hollow, developed by MMEU and published by Forever Entertainment, is the latest sci-fi horror to blast its way through hyperspace and onto the Nintendo Switch, but will this be a game containing a constellation of horrors, or will it all end up being, well, just a bit hollow?

This first-person, survival-horror sees you play the role of a nameless pilot who comes to dock aboard the Shakhtar-One, a space station/mining facility that orbits around the planet, Jupiter. In a state of confusion, you disembark from your ship onto a deserted, metallic hulk that immediately shows signs that all is not right here; no power, no lights, desertion and a computerised voice that signals an alarm of some sort. It isn’t long before you are contacted by a mysterious figure through the use of electronic messages and hand-written notes. Following their instructions, you are guided into the depths of the station in order to put right what has gone terribly wrong. These messages also act as a story of sorts, filling you in on the events preceding your arrival and, as you play deeper, also reveal a few twists along the way.

It doesn’t take long to discover the truth of Shakhtar’s demise, as possessed creatures of demonic origins soon make their presence felt. To help even things up, the mysterious notes eventually guide you to a weapon with which to battle the creatures that are all baying for your blood. With limited ammo and resources, you take the fight against countless elements in your search for the truth, not only on what has happened on Shakhtar-One, but also in yourself. 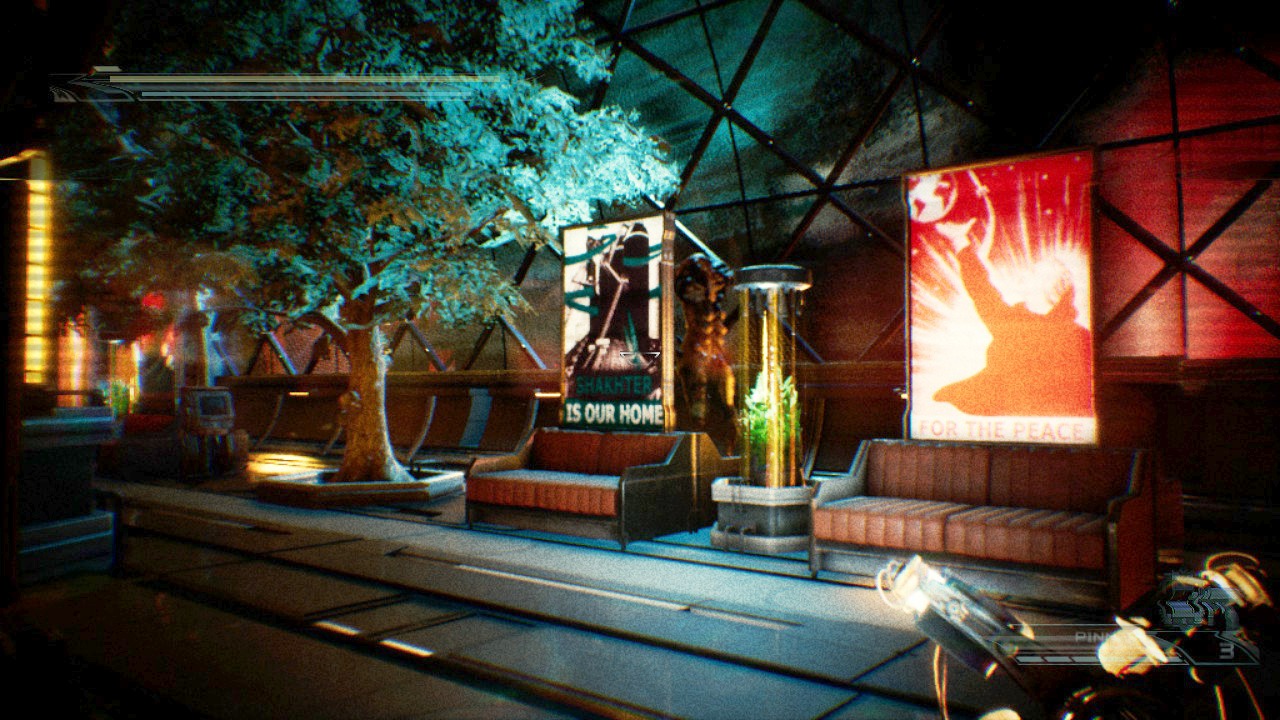 From the outset, it is abundantly clear where Hollow has got its inspirations from with a play style that is very reminiscent of Visceral Games’ Dead Space series. In order for a horror to be successful, it needs to contain an abundance of atmosphere and scares to be successful. Luckily, Hollow contains bags of tension, particularly in its audio department with clanging doors, clanking walkways and hissing pipe works. These produce a creepy environment as you begin to explore your surroundings, however, it doesn’t take too long for some glaring problems to begin raising their ugly heads. Despite the air of tension that the game produces, you soon learn that for the majority of the time, these sound effects are merely cosmetic and you find yourself ignoring them as they become more meaningless in their meaning. In other words, although they are trying to scare you, there is nothing scary that’s going to happen whenever you hear them. Volume levels are off slightly too, as the audible presentation of some of the voice overs can barely be heard over the background sounds.

Visually, the game presents a very creepy atmosphere too. The interior of Shakhtar-One is suitably decayed and very dark. Luckily, you are equipped with a spotlight with which to navigate, however, the developers have chosen a graphical presentation that is particularly grainy, much like the original Silent Hill’s appearance, which makes it very difficult to distinguish your surroundings; especially when something bad is about to happen, again, á la Silent Hill. With the main viewpoint being from inside a helmet, I can see why this effect has been implemented but, unfortunately, it all just ends up looking a bit messy and rather than looking out from a visor, it just ends up looking more like into a television that hasn’t been tuned properly. This also has an effect on your spotlight too, as the glare that bounces off whatever you are looking at, just ends up blinding you instead.

An important element of Hollow’s gameplay, is the need to explore your surroundings; something that is made more difficult by the graphical presentation of the title. Although based in a large space station, the path before you is very linear; although the tight corridors and twisting walkways do promote a very effective sense of claustrophobia. However, the walking mechanics produce a sense of speed that is so painfully slow, even reducing to a crawl when a voice over is in action, that it ends up making exploration a very tedious experience. You do have the option to run, which speeds things up to more of a walk, but with a lack of visual clarity, making it easy to miss important items, and the game’s mechanics of back tracking to previous locations, eventually makes this a very frustrating exercise. 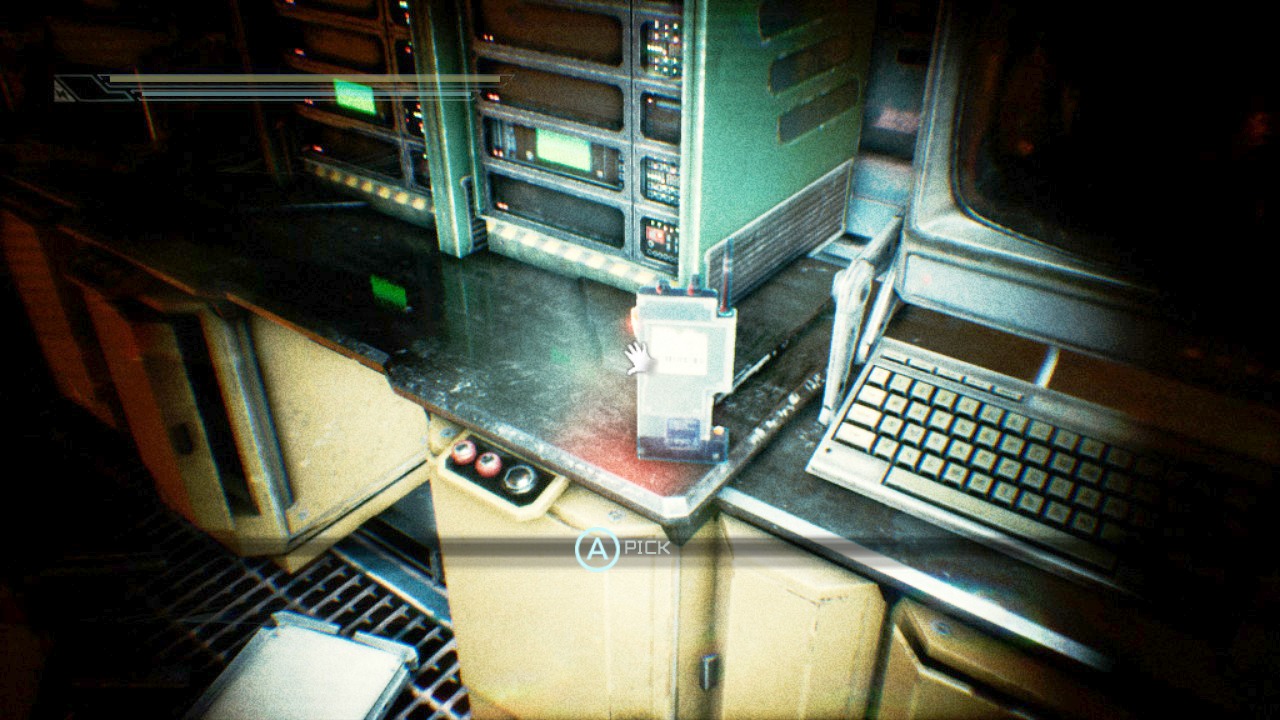 In order to advance through the game’s story and complete certain objectives, you are presented with several puzzles that need to be solved. For the most part, these sections aren’t too challenging. However, one or two of the puzzles are just plain ridiculous; even with clues in-hand, their obscurity make it very difficult to work out their solutions. Combat is generally okay, but the firing of your weapon lacks any sense of accuracy. You do have two firing modes, but one is simply bang and the other is boom; the latter using more of your limited ammo supplies. This produces another area where problems can arise. If, like me, you play with a habit of reloading after taking down an enemy, you lose whatever ammo was left in your weapon. However, choosing to keep your ammo in your weapon after some it has been dispensed, can lead to a frustration of reloading, which is painfully slow again, when surrounded by the ungodly creatures that infest Shakhtar-One. You do have the option of kicking, but this is largely ineffective and doesn’t kill any enemies; it’s also very difficult to judge distance which often leaves you dancing a jig around an audience of demonic onlookers.

It’s easy to see what the developers have tried to achieve with this game; and for the most part, they do succeed in a lot of what Hollow has got to offer. It can be scary, it can be tense, it can be terrifying and, more importantly, it can be fun to play. However, it just feels that they have tried a bit too hard to be more like its forbearers’ series and, ultimately, the game fails in this respect. It’s by no means a terrible game, or a bad one even, and it does have a lot to offer, especially with a replayability value of having dual endings, but it falls short with too many of its mechanics and that, ultimately, leads to too much frustration which leaves the game feeling merely average and, unfortunately, a bit hollow.