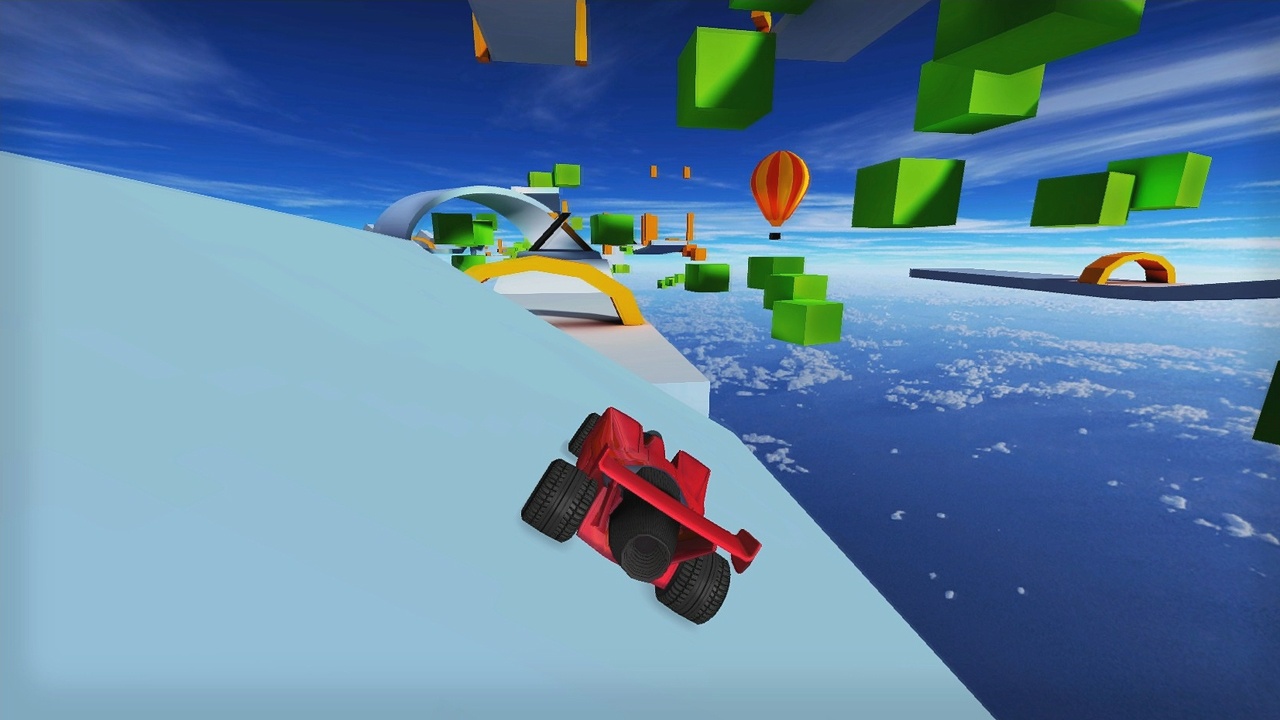 As the title implies the vehicles in this racer are cars, and yes they come equipped with jet engines that allow you to soar through the air (hence the ‘stunt’ post-fix). However you won’t be showing off too much during your air-time as this is a game that requires precision and one wrong move could see you suffer the consequences – the racetracks here are a series of floating platforms and it’s all too easy to go flying off the edge or smash your car into pieces on a barrier. Luckily the engines aren’t your only piece of equipment, the cars are also out-fitted with an air brake that permits an element of control while soaring through the skies (and some nice drifting round corners while on the ground).

With just these two methods of supplementing your speed and steering the game is fairly simple – the aim of each level is simply to navigate to the end of each level as quickly and with as few reloads as possible.  Completing a level fast enough unlocks further levels and depending on your speed various medals can be unlocked. However the incredibly steep difficulty curve means that only the most skilled of drivers will be able to make much progress the levels are ranked from ‘very easy’ to ‘very hard’, but even those at the very easy rank are pretty challenging and I only managed to scrape through the medium levels with a great deal of perseverance.  The ‘hard’ and ‘very hard’ levels?  Not. A. Chance. 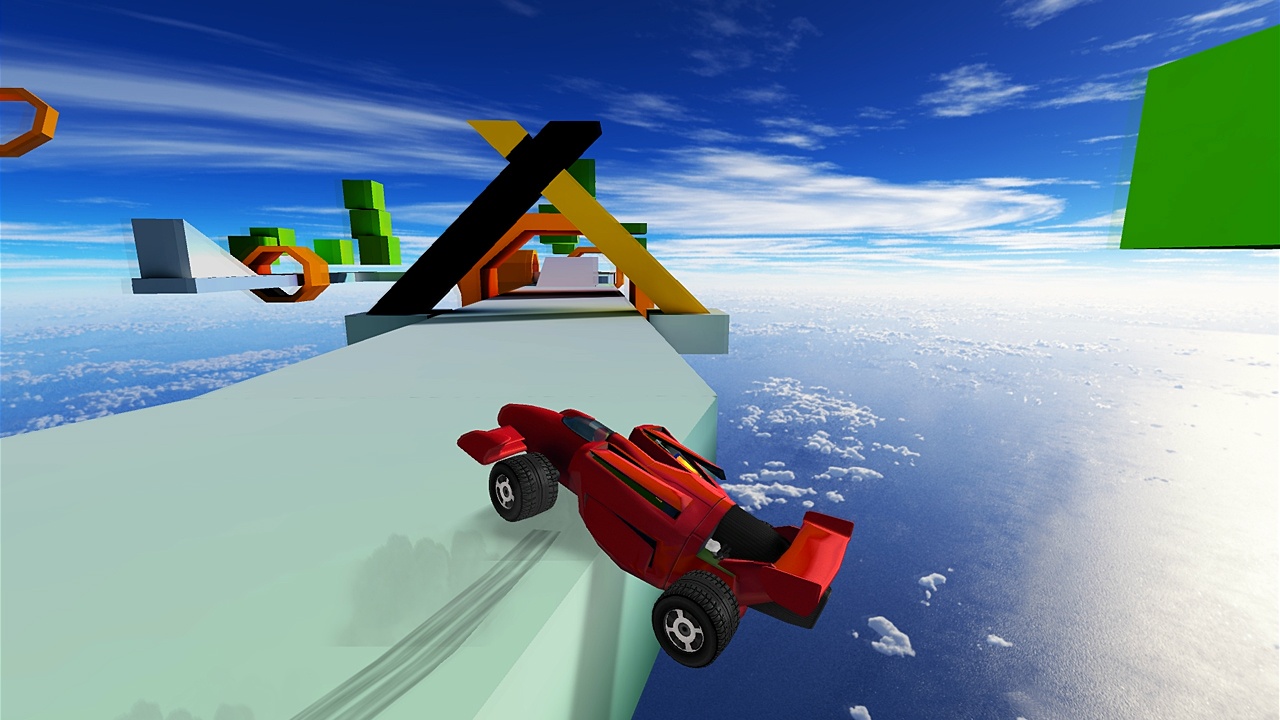 Luckily the game does acknowledge how unforgiving the various levels are as any death (either from destroying your car on the scenery or falling off the track) results in an instant respawn at the numerous checkpoints – you can also force a respawn at the press of a button if you know you’ve messed up. And you will need to restart a lot – respawning uses up a few valuable seconds so you’ll spend most of your time on a track learning the layout through trial and error before you start to make real progress.

The graphics are slightly at odds with the challenging gameplay, with both track and scenery consisting of bold shapes and bright, primary colours. They are visually pleasing though and the game whizzes along at an impressive pace, and my only complaint in this regard would be that the camera angle tends to go haywire whenever you start to pitch or roll in midair – although if you’re already off course in midair you’re usually pretty doomed anyway.

The main crux of the levels are in the platform style with 25 available, although you’re unlikely to be able to access most of them unless you’re especially talented – but like many games of this style half the fun is from practicing and aiming to beat the challenge. Further longevity is also offered through 11 time trial levels which have a more traditional track layout, and it’s telling that I actually enjoyed these more than the standard levels. There are also a further eight ‘collector’ levels which task you with collecting a number of difficult to reach stars on a single lap, but these tracks are so demanding I can’t see them appealing to anyone. 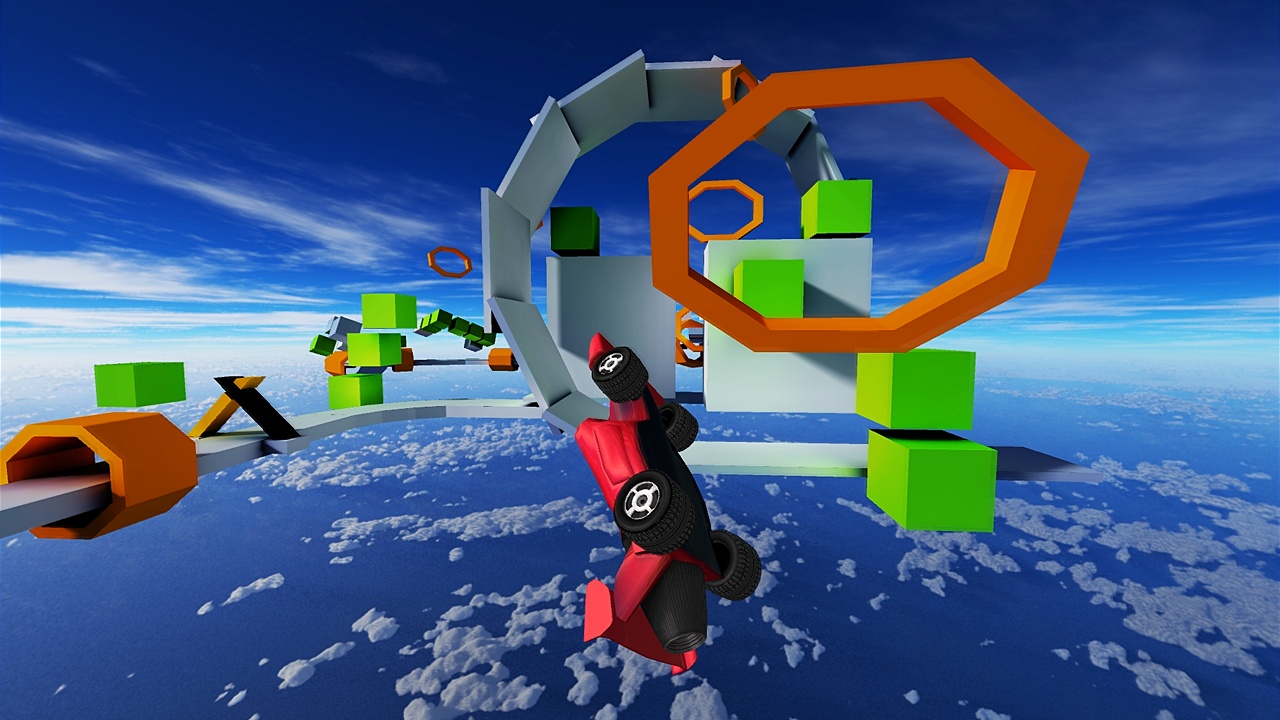 As you’d expect from a speed-based game there are the usual leaderboards to compare your times against friends and the worldwide community, but disappointingly there are no other multiplayer options. A ghost car of the fastest time from each leaderboard is available to race against but I would have hoped the developers would have expanded on this with multiple ghost cars or at least the option to race against ghosts closer to your own ability.

Ultimately Jet Car Stunts is a decent enough game which most gamers will probably enjoy in small doses but the extreme difficulty is baffling and will probably end up pushing most away. With some more forgiving levels and additional features this could have been quite easily have become a much more enjoyable experience, and given how long it’s been since its original emergence on iOS it’s a shame more wasn’t done to expand on the core gameplay.