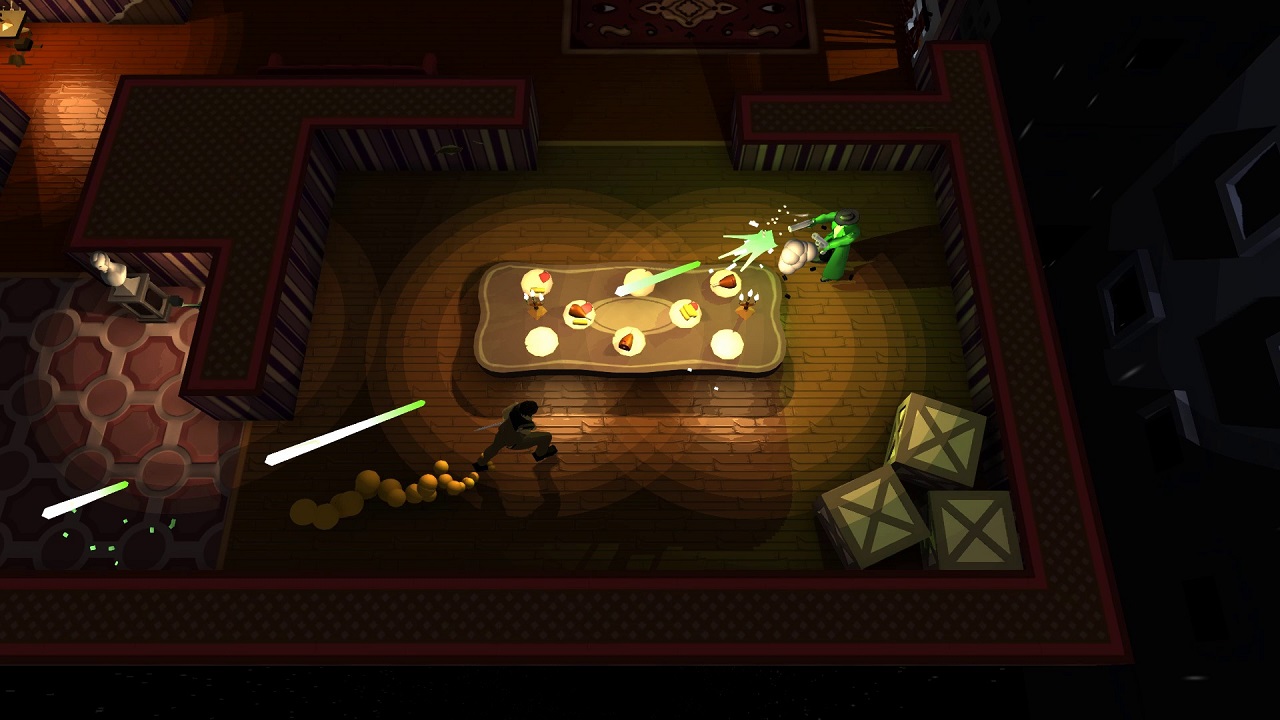 As a child, two of my favourite pastimes were playing hide-and-seek with my friends, before we went down to the woods to find gun-shaped sticks and indulge in a good old-fashioned game of war. It was how we rolled before the concept of video gaming had even been heard of. These days, kids and even adults, mimic the games of old within a digital format; especially in titles and franchises such as Fortnite and Call of Duty. In essence, they’re basically the same game, but without the need to go out and get cold or dirty; saving us all from the wrath of our parents when we were late home for dinner or covered in mud. So you can imagine my delight when I came across At Sundown: Shots in the Dark; a new shooter that incorporates a hide-and-seek mechanic as it fires a release upon the Nintendo Switch.

Developed by Mild Beast Games, with publishing through Versus Evil, this stealth-based arena shooter pits up to four players in both local and online multiplayer, across a variety of stages and game modes where the shadows are your friend and the light is your enemy. Viewed from a top-down perspective, each player, either human or AI controlled, shoot it out in a battle royale style to be the last man standing. However, in order to remain out of sight, you must stick to the shadows where the other competitors cannot see you. Find yourself caught in the light though and your position is revealed. It adds a tactical element to the gameplay, although unfortunately, it’s not one that necessarily works to anyone’s advantage.

The game boasts eighteen different maps that range across a variety of six zones from gardens to dance floors; each one containing a myriad of light sources, darkened areas and environmental items. Over nine different game modes, from straight-up team deathmatch to king of the hill and gun game, you must take out your opponents when their positions have been revealed. Each of the game modes have a different set of objectives, such as team deathmatch’s first to a set number of kills to gun games weapon advancements as you work your way through each of the seventeen varieties with every kill you get. 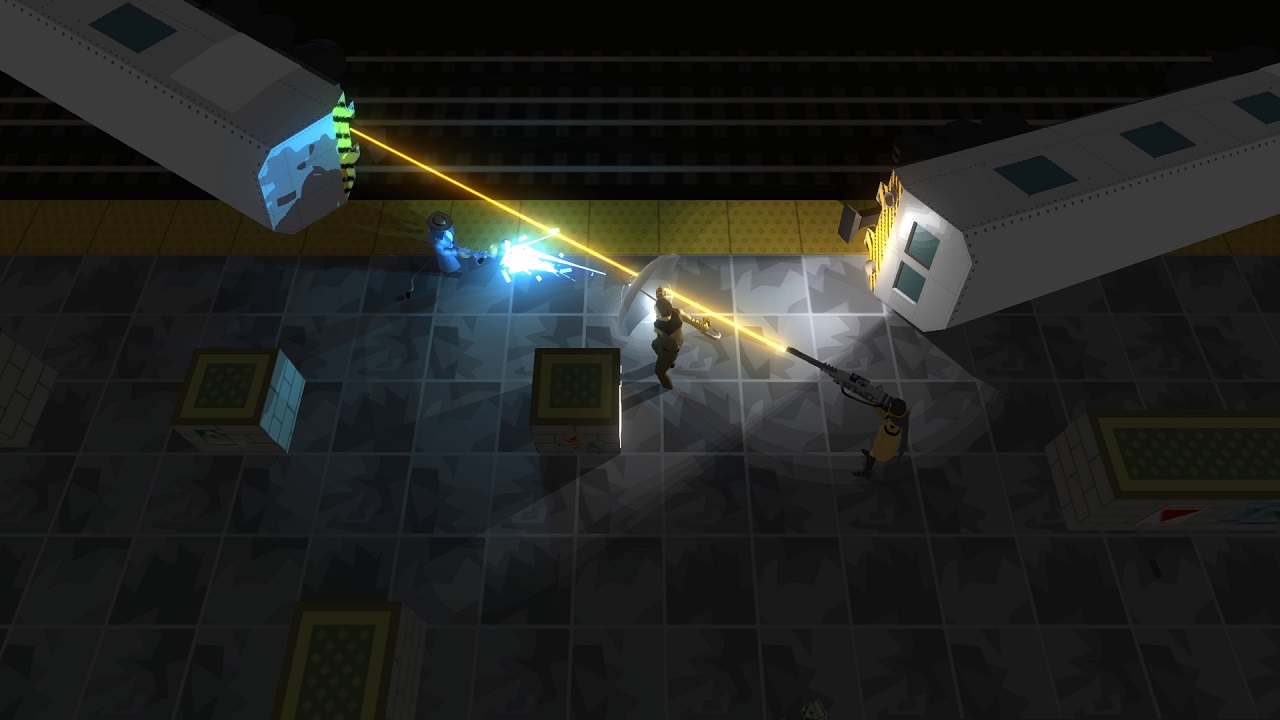 In terms of depth, there is a lot on offer within this game. As you play the game, you earn XP that levels you up. With each level earned, you then unlock new weapons, levels and game modes; meaning the more you play, the more you open up. It does offer an enticing carrot to keep you playing. There are also in-game achievements that can also give your XP a boost. Each of the game modes, weapons and levels also offer a variety in how they feel and play, helping to keep things fresh and balanced. Some levels have more shadow and environmental objects than others, shotguns produce a wide spread while automatic rifles offer more sporadic firing and each of the game modes contain different objectives. As far as a variety of elements go, this game has them in abundance.

However, in order to unlock everything that the game has to offer, it’s important that it also contains a good level of playability to keep you invested. Unfortunately though, for me, it was here where the game began to falter. The concept is sound, but its execution felt too random for me to be enjoyable. Hiding in the shadows makes your character invisible, not just to everyone else, but to you too. This isn’t necessarily a bad thing, but each arena fills a single screen, with all four players playing from the same viewpoint. Hiding in the shadows does offer you cover, but it can also hinder your ability to keep track of where you are on the map. You do have the ability to show your position by pressing the B button; but at the same time, this also gives your location away to everyone else. 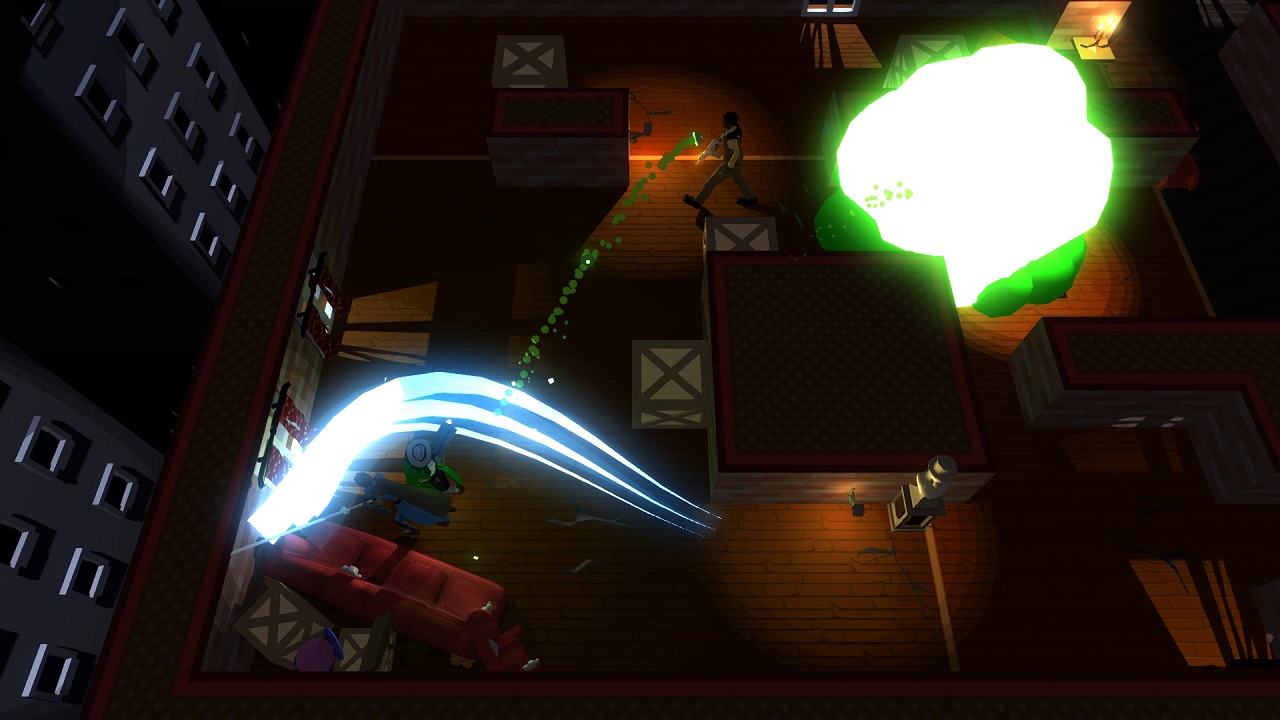 There is an element of skill here, one that comes in time as you learn the layout of the land, but at the same time, it’s also severely limited. No matter how hard I tried to be tactical, I couldn’t escape the feeling that an overriding element of luck always came to the fore. The end result was a game where the shadows no longer played a part in the game, as I simply began to run-and-gun in the direction of other players who were caught in the light, or blind-firing into the shadows. In the end, I felt a little cheated and the tactics and stealth of the gameplay just felt cheap. Because of this, the game began to feel stale very quickly; making me more and more disinterested in unlocking what else the game had to offer. Saying that though, if you do stick with it, then some of the game modes can be quite rewarding to play through.

Despite some of fun that can be had with certain weapons or game modes, the overall level of gameplay was one that soon grew tiresome; both against AI and human opponents. However, I must point out that the review copy of the game that was supplied to me is somewhat different to the game that goes live at a retail level. Everything had already been unlocked for me, taking away some of the potential of its dangling carrot. Also, not all of its components were readily available either, with special challenges set to be utilised in live showdowns and the online capabilities not yet functional. In those terms, I found it difficult to truly appreciate what I was actually playing and the hope is, upon release, the enticements that this game could potentially offer ramp it up significantly; particularly within its online play.

Overall though, At Sundown: Shots in the Dark isn’t a bad little game; especially if played in a party-style environment in local multiplayer. It contains a wealth of depth and unlockables that can be rewarding and offer and enticement to keep on playing; plus a nice variation in weapon styles, game modes and arenas. In fact, I’d say that this is where the majority of the game’s charm lies. In terms of gameplay though, I just felt it was a little lacklustre and too easy to get cheap kills by running-and-gunning around the limited spaces of the maps. The lack of any meaningful tactical or stealth elements did ruin the game somewhat for me, which in turn made it grow quite stale pretty quickly. Despite this, I’m not going to say that this is a bad game, in fact, in some aspects its quite good, but with a focus more on luck than skill, this soon became a game that felt more average than anything else.

At Sundown: Shots In The Dark Review

A game that’s worth a shot in a dark, but can also be one that soon becomes lost in the shadows.