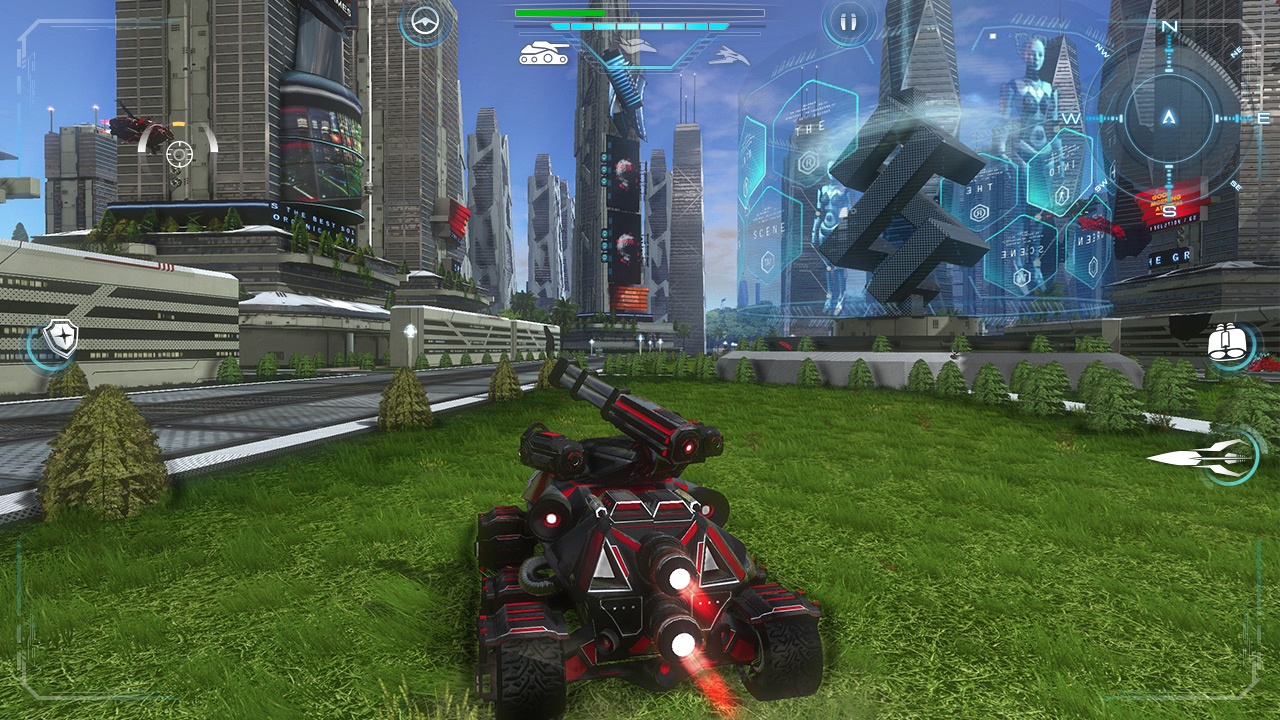 The developers, Atypical Games are beginning to create quite a library on the Nintendo Switch these days. And why not? After all, the majority of their titles help to fill the void of combat simulations and vehicular warfare within the palms of our hands. They also cater for a number of historical tastes, from the Second World War up to the Modern Day, and their latest title, Battle Supremacy – Evolution brings us smack bang up to the future, as its sci-fi spectacular transforms a release onto the Nintendo Switch.

The Battle Supremacy series has produced a decent template for tank warfare on our beloved Nintendo machines. However, this time, Atypical have taken things one step further, with the ability to transform from the tank into a drone and then onto a futuristic jet fighter. This brings a whole new level to the familiar gameplay of their previous titles from just their usual standard of rolling into warfare on your tracks, allowing you to take to the skies in air-to-air and air-to-ground combat, as well as take in the beauty of the futuristic settings in which the game is based.

As per usual, within the Battle Supremacy games, there’s a wealth of content to play through, as well as game modes that give the game a form of longevity. However, what this particular titles is missing this time around, is an online component for multiplayer; despite what may be listed on the Nintendo website. It’s a shame really and a missed opportunity as this could have been something really special had it been incorporated this feature. Although saying that, if the previous games are anything to go by, the lobbies are rarely inhabited on the Switch. What it does offer though, is over one-hundred levels within a campaign mode that takes you across a variety of mission types and locations, from escort to racing, yes racing, and sleek neon-filled cities to desolate wastelands. 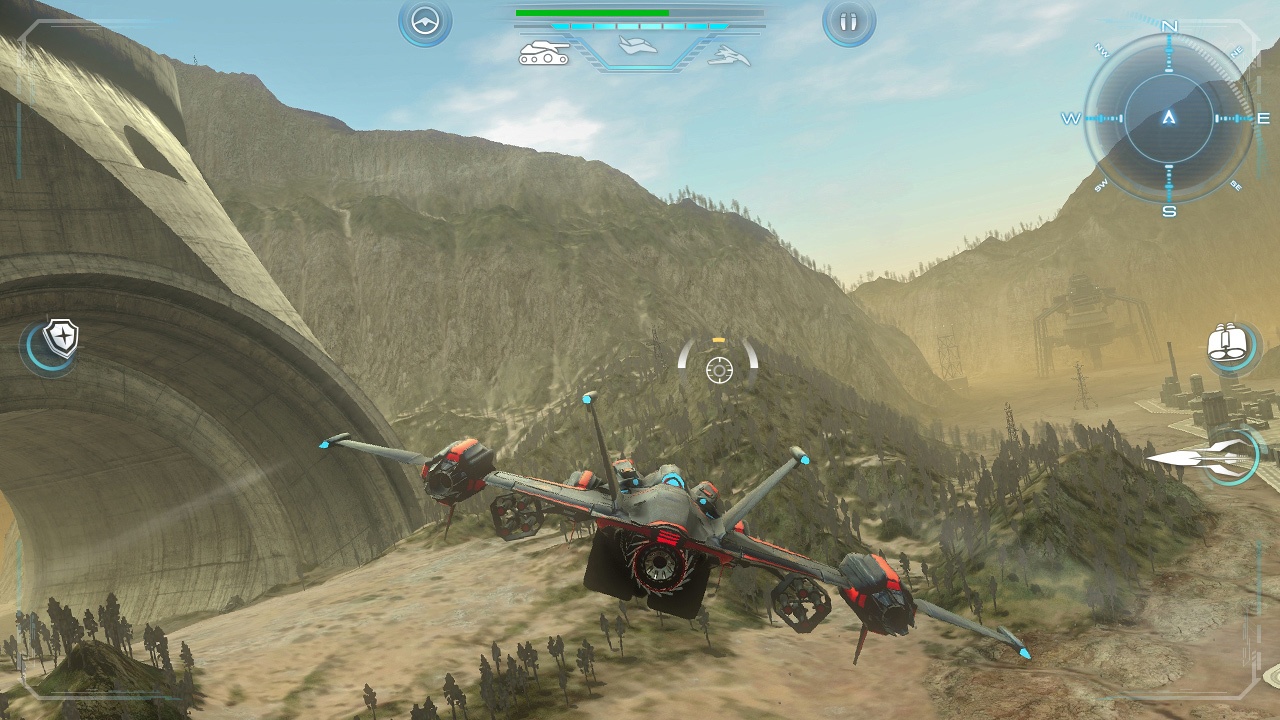 Although the game lacks any online multiplayer, it does contain a single-player mode whereby you can play a series of multiplayer games against AI bots. These range from Team Deathmatch to King of the Hill and Free-for-All to Base Capture; all with teams comprised of up to thirty AI players. Despite a couple of shortfalls, what this game does contain is an abundance of variety, not just in game modes, but also within the general gameplay through mission variances and the ability for ground and aerial warfare.

This is especially true when it comes to the general campaign of the game. Each level is narrated by a robotic voice that briefs you of the mission requirements; something that changes on-the-fly through mission progressions and often leading to a branching number of objectives that require the dexterity of your evolving machines. It all takes place amongst some stunning looking scenery too, something that is all the more highlighted with the ability to view it from the ground and from the air. The level of combat here is generally fun and holds a level of excitement as you take part in tank warfare within the thick of a forest, before spreading your wings to swoop in and out of the skyscrapers within a nearby metropolis.

For the most part, the control scheme is particularly tight; especially when airborne, with a degree of control that can see you fly through the tightest gaps and manoeuvre around the scenery with relative ease. Surprisingly though, based on their previous games of tank warfare, the armoured element of its gameplay can feel a little tricky at first, due to the tanks limited scope for manoeuvring. However, I never felt that it was uncontrollable or detrimental to the overall gameplay and in time, it is a control scheme that you do get used too. The game also has a clever implementation that allows you to give control to the AI and you just concentrate on manning the weapons. This works effectively well, although I did feel that it takes away a little element of the gameplay, but the AI can be a little gung-ho at times and doesn’t seem to recognise the danger of darting head-first into battle. 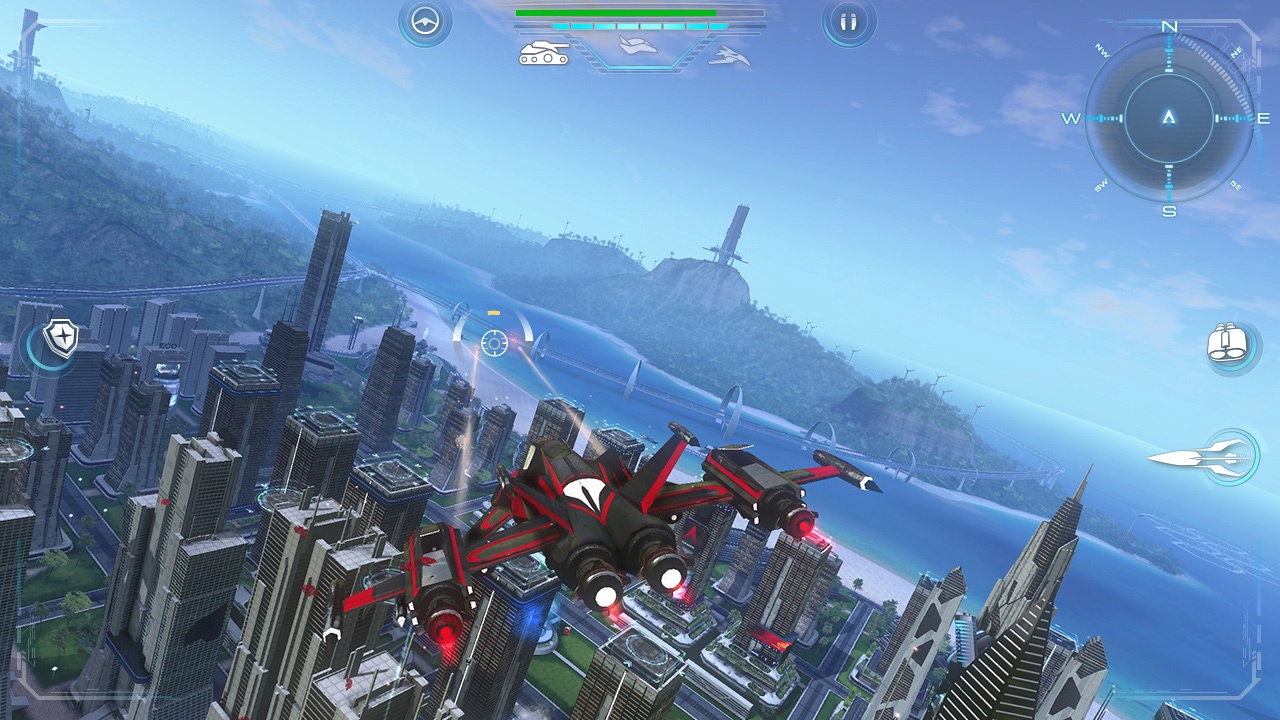 Transforming your vehicle is also easily implemented, with the shoulder buttons morphing from tank to jet and vice versa. It’s a seamless transition that feels almost Transformer-like and is a guilty pleasure that never grows old. If there’s one slightly frustrating thing about the overall control scheme, it’s that, particularly when in the tank, you can find yourself stuck within the landscape on the odd occasion or find yourself in an uncompromising position and open to enemy fire, but I feel that this may be largely down to camera angles more than the control scheme itself and in all honesty, is only a minor annoyance.

Playing through the campaign missions or the single-player element of the game awards you XP and points that not only level you up, but also allows you to unlock a variety of vehicles and upgrade existing ones. There’s a wealth of options here from heavy models of vehicles to lighter, more manoeuvrable models and upgrades that can increase shields, armour, targeting, speed and manoeuvrability; amongst others. The best thing here, is that no matter what game mode you play, they all award you with a level of points that can be used to expand your arsenal. On a technical level, the game plays well with no apparent bugs and looks great, whether you play it docked or in hand-held mode; although I did notice that the frame-rate does drop slightly when playing the multiplayer games against the AI, which maybe a reason for the omission of online play. It’s not game-breaking in any way though and still presents a thoroughly enjoyable and engaging level of gameplay.

Overall, Battle Supremacy – Evolution is another welcome addition to the ever-expanding library of games within its series. In fact, along with Ground Assault, this is one of the big guns within its arsenal. It’s sci-fi setting, satisfying transformations and wealth of gameplay and content, ensure that this neat little package will remain on your memory card for a long time to come; especially if you’re a fan of vehicular combat games and science fiction. A lack of online multiplayer is sorely missed here, but the AI equivalent still presents a satisfactory level of fun. Although some may find the control scheme of the tank to be a little clunky, it is a control scheme that you can get used to, although you do also have the ability to upgrade each vehicle, as well as the option to customise your controls to something that may feel a little more natural to you. Personally though, I didn’t find any of the controls to be much of an issue really. If you’re a fan of Atypical Games’ previous Battle Supremacy titles, then you’d be a fool to miss this and if you’re a fan of vehicular warfare and science fiction in general, then there’s plenty here that will satisfy your hunger for combat games on the Switch.

Atypical Games come up trumps again as Battle Supremacy – Evolution morphs into a futuristic world of ground and air combat on a very satisfying level.