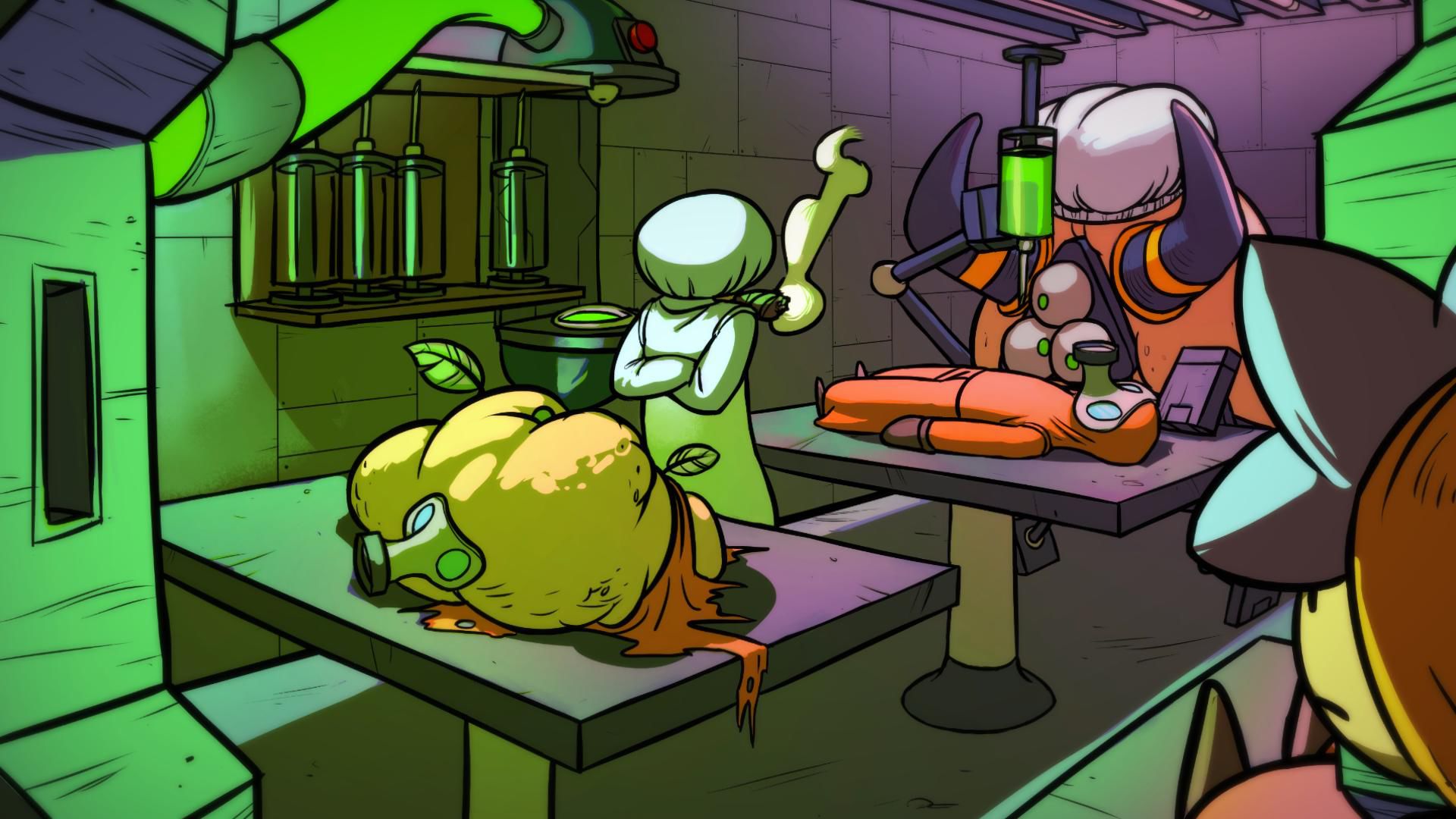 Take the zany physics of ‘Super Meat Boy‘, add a little ‘Splatoon‘ style run and gun action, finally load up with the repulsion gel found in ‘Portal 2‘ and you may have something that resembles ‘Splasher’. This is a game where you play as a cleaner at a large ink factory. Here you stumble across a mad scientist conducting some unethical experiments involving injecting test subjects with chemicals. The aim of the game is to run through all the stages within the factory while rescuing as many test subjects as you can.

‘Splasher’ begins as a fairly straight forward platform game where you only have the ability to run and jump. Like ‘Super Meat Boy’ the protagonist appears to be pretty small on the screen, allowing the player to see a decent distance in front of them which is perfect for some high speed sprinting and long distance leaps.

The opening stage contains some cliché platform apparatus such as moving ledges over vast pools of acid. However, in addition to these structures there is the unique addition of coloured inks that are squirted all around the various surfaces. These include a yellow ink that has a rubbery property to bounce players that jump on it, and a red ink which allows players to run up walls and along ceilings. 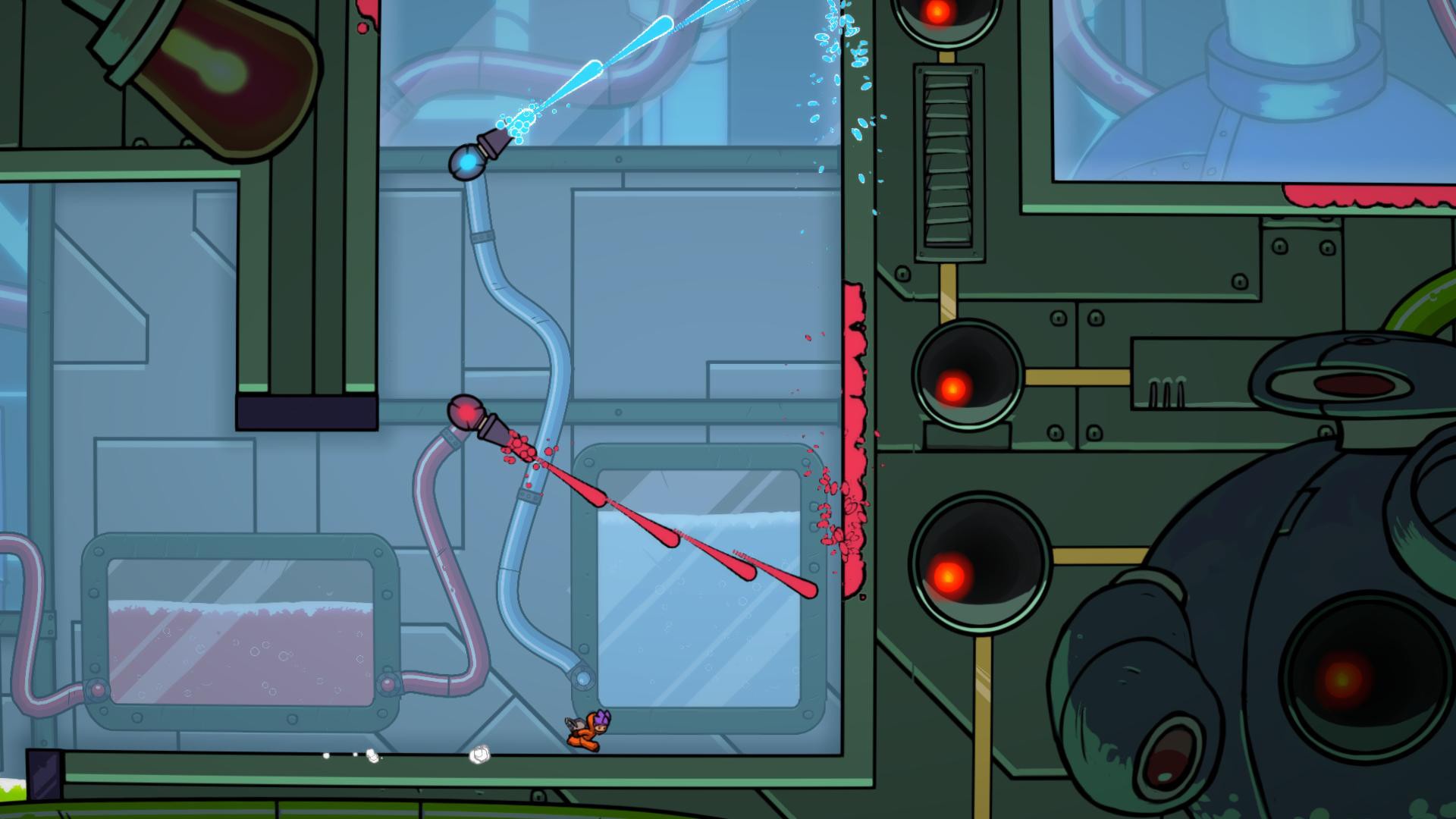 By the end of the first stage you’ll discover your first utility in the form of a squirt gun. At first it is only compatible with water and allows you to not only shoot at enemies, but also to wash ink from surfaces and spin turbines. Turbines are connected to various apparatus such as moving platforms and buzz saws, so being able to interact with them is essential for progress. The gun has fantastic range, allowing you to hit targets at a safe distance. You can fire in any direction and auto lock-on to specific targets which helps with this game’s quick pace.

For the first half hour of game time this is the extent of your abilities, and I have to be honest I was completely satisfied. The level design is fantastic. Whoever crafted these stages did an amazing job of experimenting with the various gels and elements in a way that keeps the game interesting and engaging without compromising on slowing the pace or overcomplicating things. The balance is incredibly comfortable, and with its tight controls I was having a lot of fun.

After beating half a dozen stages you are granted access to a little upgrade. Ink is added to your squirt gun allowing you to effectively paint the stages ‘Splatoon’ style, allowing you to create your own paths through the levels and gain access to areas you previously couldn’t reach in the factory’s hub world. From this point on ‘Splasher’ remains a great action platform game, but also incorporates puzzle elements. The opening stages grant you enough of an understanding of how the gels work, so from here on it’s up to you to put that knowledge into practice.

There are 22 well crafted stages in total, each of which contains 7 hostages to save. Hostages can be found stuck in all kinds of situations from being held captive by an enemy, being stuck on a jet of water or a pool of ink, being trapped in a cage or a quarantined area, etc. By solving a small puzzle and making physical contact you can free them from their plight, but be careful as it is possible for hostages to die if you put them in harm’s way. The final hostage in each stage appears in a cage right before the exit, and can only be released if you have performed well consistently throughout the level. Bright yellow gel can be accumulated by washing it from walls, destroying enemies and shooting special turbines. The margin of how much ink you can afford to miss in each stage is very low, so you have to make a bit of an effort if you want to rescue all 7 hostages every time. 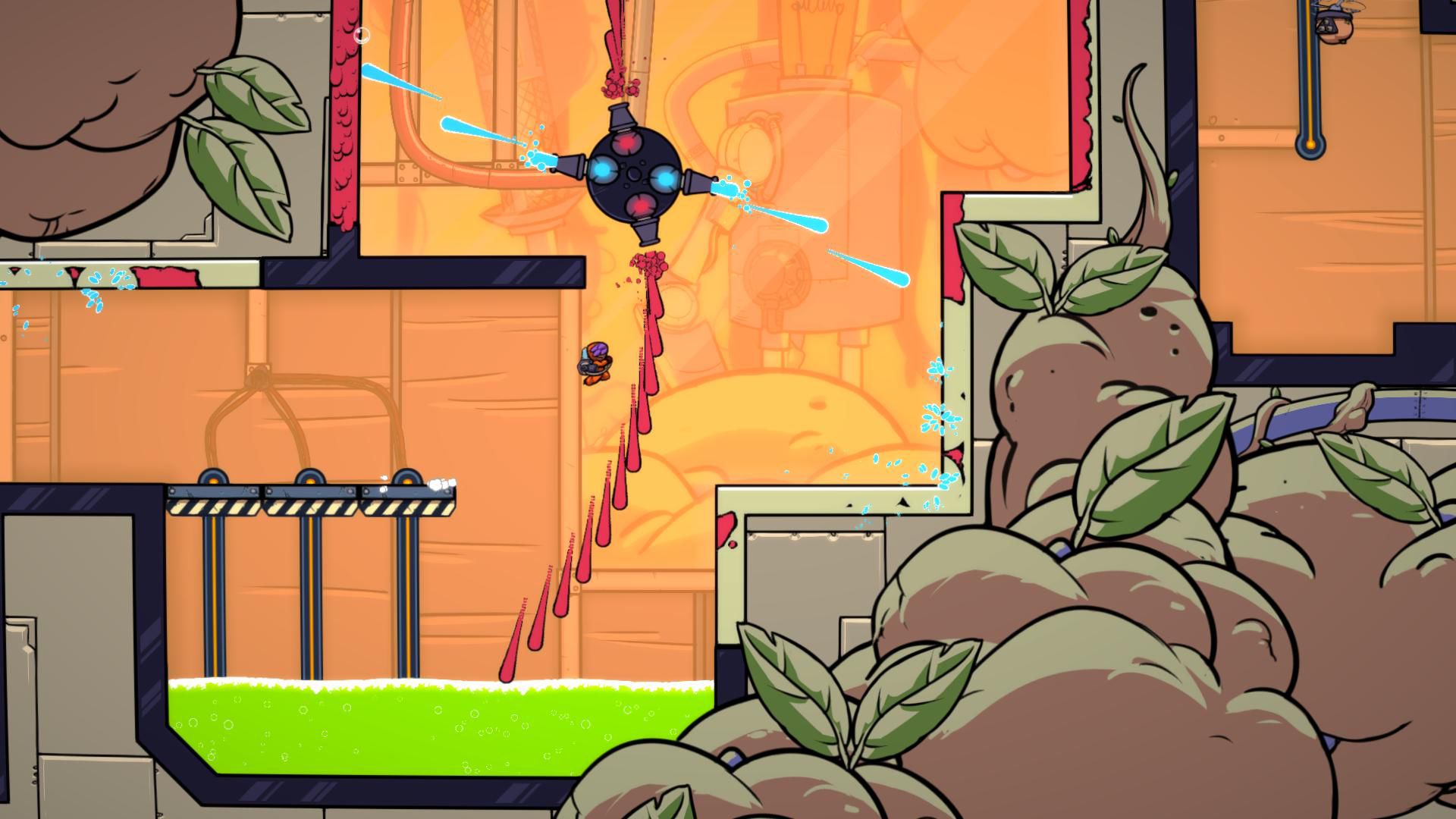 From the hub area you are free to back track and re-attempt any stage you like. Certain areas are locked off until prior stages are beaten or enough hostages have been rescued. Here you can also access a few alternative game modes such as time trials where you can complete stages against the clock in order to earn medals, or a full speed run for once you feel confident enough at beating the game. There are separate speed running modes for those who want to include rescuing the hostages or those who just want to beat the stages as quickly as possible.

Not only is ‘Splasher’ really well designed, but a lot of effort has clearly gone into the graphics. No corners were cut when it came to the art style. Unlike a lot of indie platformers, you do not notice a lot of repetition in textures and assets. The environments all posses a fresh cartoon look, the choices in dynamic colour pallets for each stage ensure that there is no confusion or clashing, and the backgrounds contain some stunning parallax scrolling which brings the world of ‘Splasher’ to life. The music is a cut above average too.

So far I’ve had a tremendous amount of fun with ‘Splasher’ and I’m looking forward to playing more of it over the coming weeks. In a market that is saturated with indie platformers, this is one that I hold in very high regards. The gameplay is very smooth, the pacing is perfectly balanced, the action is very fast and I’m having a great time with it. This is a title I wouldn’t regret buying at the asking price.