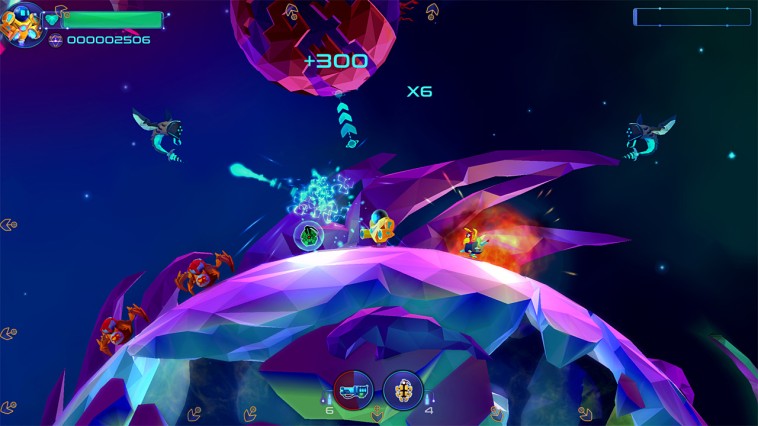 I appreciate a developer who looks at a game and decides that it needs to be something more. A lot of big studios have come under fire for making games that are too one dimensional, too limited in how you can enjoy them. A lot of shooters nowadays are entirely reliant on multiplayer to make their title worth the sizable investment of money, time and data that is required, and that makes solo players or players in unfavorable time zones angry. So when I saw Robonauts had a co-op setting, I halfheartedly rolled my eyes at what I assumed was a quick and dirty implementation. Imagine my surprise when I discovered that it was something totally different and, as a result, quite enjoyable.

Let me back up. Robonauts is the story of a robot (or robots) who’s been hired by a questionable company to help establish their presence on multiple planet clusters around the universe (or at least in this galaxy, this is not a game about astronomy). You, small robot soldier, must then go to these clusters and accomplish the mission set forth, which usually involves shooting a ton of things till they explode. Sometimes the things are stationary, sometimes they run around and fire back, and, of course, sometimes those things are very, very big and will destroy you without proper planning. There’s quite a few planet clusters to get through and, due to the mechanics and nature of the game, may take a while for you to get all the way through.

Since these are multiple planets all in the same gravitational fields, Robonauts has a lot of fun with angles and perception, and I really need to strongly warn people with motion sickness issues. Because you can run all the way around a majority of these planets, you can very quickly get queasy, especially in later stages when you need to be moving constantly to stay alive under different wave conditions, and jumping from one planet to the next usually means arriving upside down and the camera quickly spinning 180 to correct orientation. I basically needed to set my environment completely (fresh air, daylight, not drinking heavily the night before) in order to enjoy it without getting very, very unhappy. After that, things got a lot better. 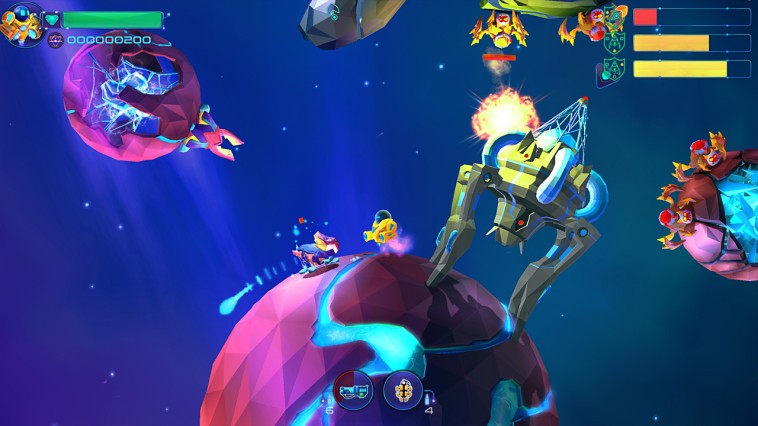 Robonauts relies on the concept of shooting, moving and bombing where applicable. The base gun and bomb are both unlimited and technically enough to get through should you be unlucky on pickups. However, I don’t think there was a round where I wasn’t practically buttered with guns, explosives and healing items every few enemies. The guns all are pretty impressive to behold in comparison to the base, with shotgun effects, a railgun “round the world” type shot and a slew of others. They have limited shots, but you aren’t left holding the bag when they run out, a welcome change from the madness of old FPS rules. Robonauts understands that even casual mode is pretty frantic (and hardcore mode was simply absurd) so having all the weaponry available at random intervals really helped break things up.

In terms of fun, it’s really enjoyable to do the large, sweeping planetscapes, taking out multiple enemies and slowly working your way to completion, and I appreciate Robonauts giving you a map that highlights where you still have unfinished business. But it can also be pretty daunting when you just want to enjoy the expedition of running and gunning and you need to backtrack to another orb because you missed one dude before hopping off to the next moon. Although, when the planets align and you’re close enough, you can actually shoot several monsters on other planets while staying safe on your own. There was something very “fish in a barrel” about it that was darkly satisfying after needing to keep an eye on both sides all the times.

And yes, multiplayer exists in split screen goodness and it’s even more fun. Besides the worlds not just being straight carbon copies of the single player mode, we found that Robonauts did cut down on heal drops, meaning you two couldn’t be completely autonomous. If you’re really cocky, send player one to the left, player two to the right and clean house in double time, but that doesn’t always work out. If a robot falls, you or your buddy needs to haul ass back to the other asteroid and repair them while also trying to not get shot into scrap yourself. I actually really liked how the game attempted to balance independence and codependency to make it work, because traveling together for everything was a waste of resources, but being too far apart meant long waits and downtime after disasters. 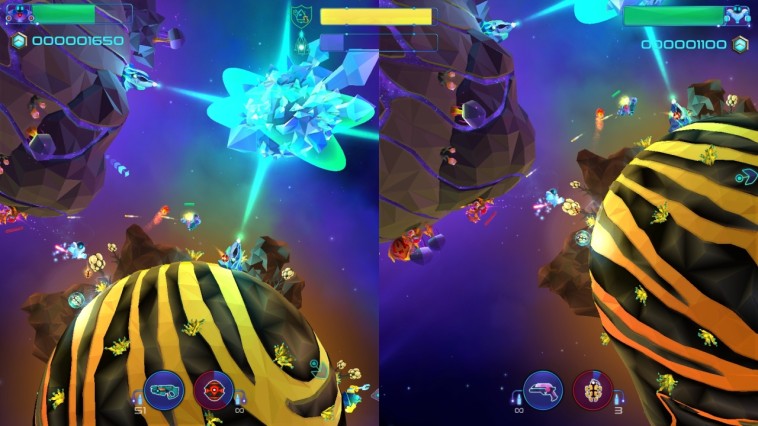 I feel like I’m being very dismissive of the artistic side of Robonauts, but it’s hard to think about when it wasn’t the most important part of the game. I liked the art style, it was round without being too sweet and gave a proper early 90s sci-fi feel that the era inspired, not necessarily how games looked at that time. The music is completely forgettable, serving to be a good backdrop to the game at the time but I couldn’t hum a bar if you had a gun in my face. I want readers to understand that omission of description isn’t condemnation, but I just felt it was more important to talk about things that left marks, be they positive or negative.

Robonauts is a great indie addition to the Switch. After getting over some initial hurdles with the gravity and my own personal problem with nausea, I found it to be pretty involved, intense and peppered with dark humor as you slowly realize that you’re a corporate shill, but what can you do, you’re a damn robot. The multiplayer mode, despite being split screen, didn’t feel overly cramped, though I would always recommend playing on the TV instead of handheld mode if given the choice. Fans of working together with a friend or loved one screaming at them for medicinal attention should definitely pick this up.