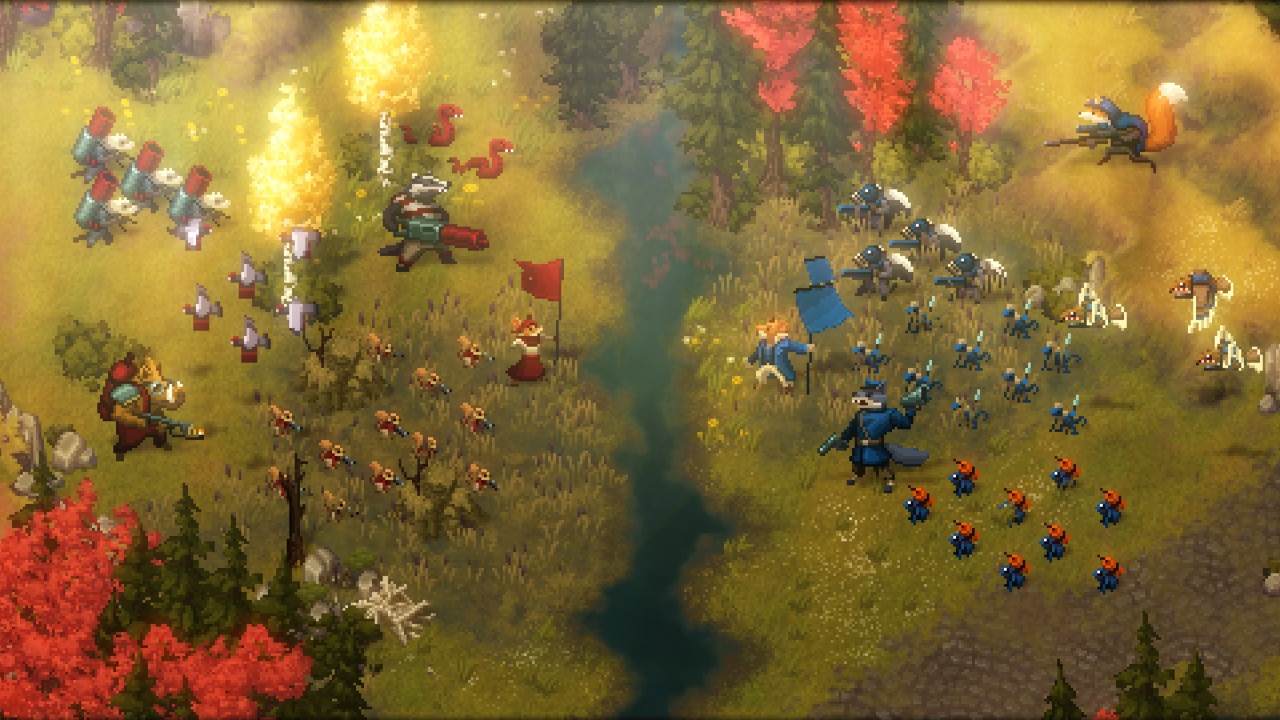 Tooth and Tail is an RTS that was “designed for those new to the RTS genre and competitive gamers alike” according to its description on the PlayStation page. This Pixel Graphic, procedurally generated title pits players against either A.I. opponents or fellow humans alike, both in online Multiplayer and in a Couch Co-Op environment. Released on September 12th, 2017, this ambitious and adorable RTS from Pocketwatch Games is certainly more than initially meets the eye.

At first glance, the Pixel design of Tooth and Tail might make it seem dated or inferior to other larger, more “modern” titles in terms of graphics. However, beneath that pixelated exterior, there’s the beating heart of a delightfully complex but user-friendly world full of rodent protagonists (and antagonists) out for blood – and the flesh of their enemies. Yep, Tooth and Tail features cannibalistic rodents, right down to the winning team feasting upon the meat and bones of their opponents. What could seem gruesome and extreme is almost cute, given the cartoonish style and Retro-inspired look of this title. Whether you’re playing as teams of two, or every rat for themselves, Tooth and Tail is action-packed and stands against many other RTS titles in terms of longevity, replay value, and Multiplayer fun.

The single player campaign slowly takes you through the world of Tooth and Tail, via the four separate factions present in the world. There’s a tutorial at the very beginning – something I highly recommend prior to Multiplayer action, unlike my own methods of trial by fire – and the player slowly learns how each of these factions differs in views. I don’t want to give away too much of the plot here since the biggest draw to this RTS title is the action rather than the storyline, but I found it interesting to learn about each faction’s primary protagonist, and their perspective on war, loyalty, and “feasting.” It’s a dark, humorous take on warring factions, and the undertone of Civil War, Rebellion, and survival of the fittest somehow fits perfectly with the anthropomorphic cast of characters. 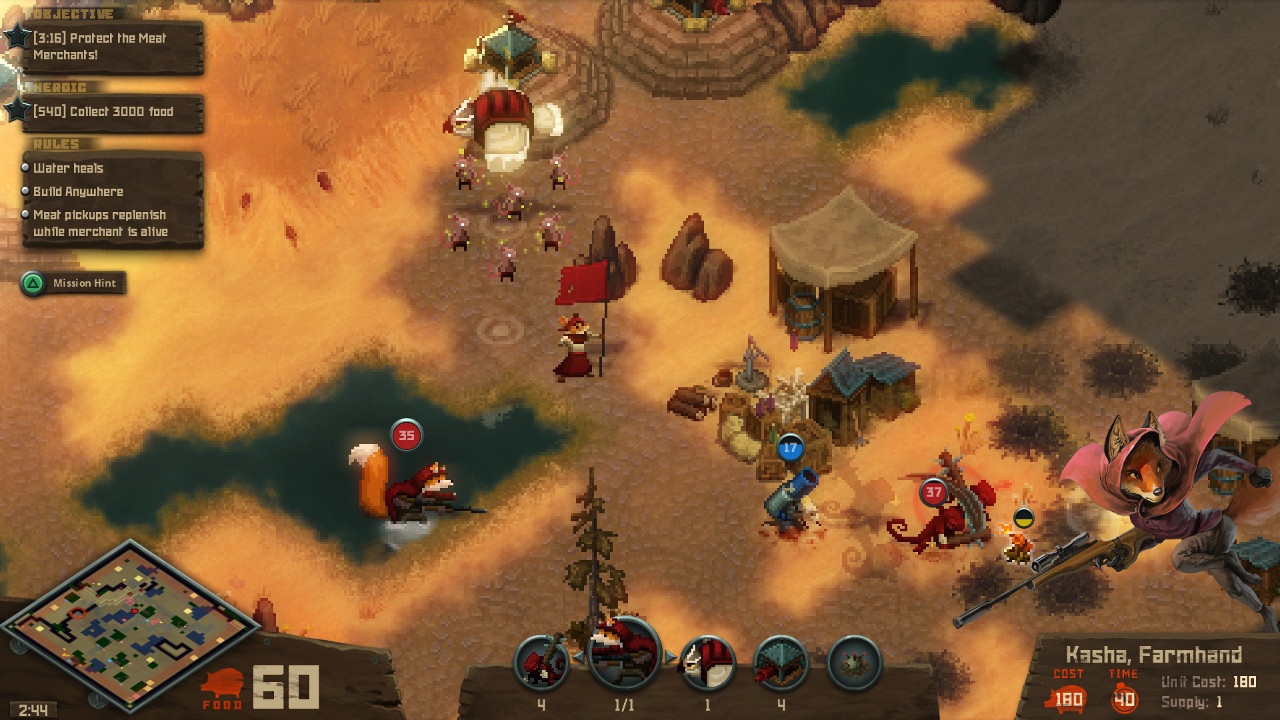 During the campaign, players are sent on missions that resemble the same fast-paced, frantic gameplay seen in the Multiplayer mode, with objectives and pieces of storyline attached to them. You must cultivate farms to gather meat, which is used as currency to build your units. Running around with a flag, the main character does little more than issue commands for his or her troop; it’s up to your individual critters to do the damage, sack opponent’s gristmills, and claim their lands. The procedurally generated maps and customizable units go a long way for adding considerable variety and replay value to Tooth and Tail, and no two engages felt the same to me once I was out of the more story-driven or tutorial portions of gameplay.

Meanwhile, the Multiplayer mode has a split screen feature for Couch Co-Op gameplay, with access to online lobbies and opponents. In competitive or team-based play, your faction doesn’t seem to lend any advantages or disadvantages; all players start by picking their six-squad roster of badgers, boars, squirrels, and snakes from an impressively vast assortment of “units.” These other furry and scaled folks have various costs for building, skills, and advantages; I found the snake unit to be my personal favorite since it has a middle ground cost, air-combat defense, plus a decent defense, especially in numbers. With so many units to choose from, players can opt for a variety of playstyles. There are even birds that will fly overhead and heal your units!

In interface and controls are intuitive, but complex enough to make this RTS feel truly reliant on actual tactics rather than luck. You can delve deep into the mechanics, plot your team of characters methodically, or just jump in with what looks good and hope for the best. There’s enough subtle overlap between units to encourage exploration beyond your standard set of six, and different tasks are easier to complete than others. I liked that, over time, your farms turn fallow, and this forces you to venture out and find new windmill-shaped areas to claim and control in order to keep your troops fed and happy. 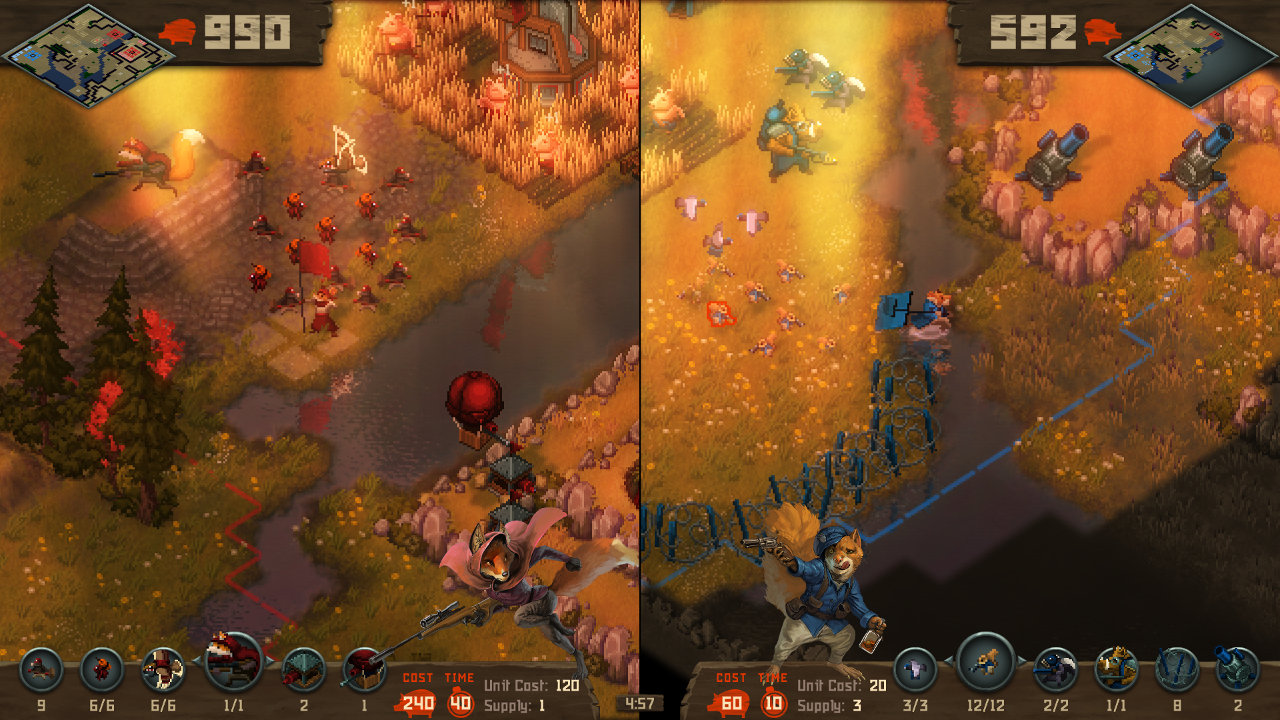 Tooth and Tail is a riot, and the dynamic of rodents fighting amongst themselves and consuming their enemies after a victory as a feast is a macabre but darkly humorous take on war. Because of the pixel graphics, there’s a Retro feel to Tooth and Tail, but that doesn’t diminish the fun factor at all. The units you can control are varied and interesting, even hilarious at times –boars wielding flamethrowers, anyone? The Multiplayer mode is my favorite selling point, especially because it offers both Couch Co-Op and online gameplay. You can team up with friends, or have everyone trying to defeat – and eat – each other, all accompanied by a soundtrack and sound effect reel that completely suits the chaos of the gameplay.

Fans of RTS titles will find a pleasant amount of tactics are required to be really good at Tooth and Tail, but newcomers to the genre also have space here. The single-player campaign has an amusing storyline, so the Multiplayer option isn’t necessary to enjoy the gameplay here. I hope that Tooth and Tail eventually offer some DLC with additional factions and characters, or perhaps new units to employ and deploy at will; still, as-is, Tooth and Tail is absolutely a worthy addition to any RTS or Multiplayer title library, and I highly recommend it to those looking for an exciting, funny, unique flair to their strategy.