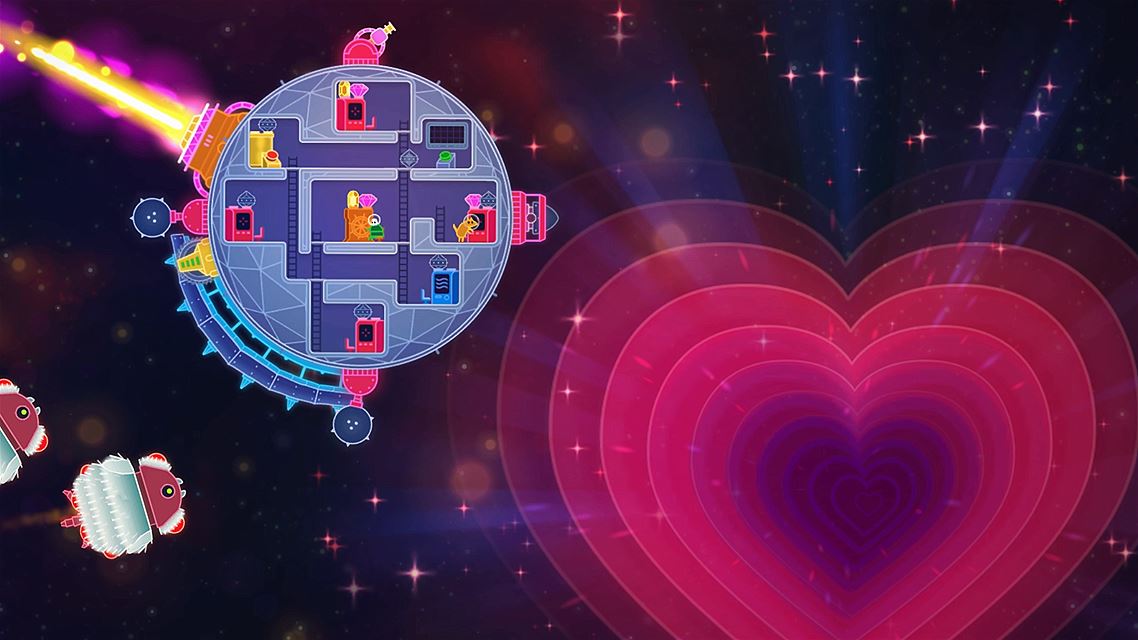 You know what the Switch was missing? Some genuine cuteness. Sure, we’ve had a couple of more anime characters show up, and there’s nothing ugly about Beach Buggy Racing or the piggies in Conga Master Party, but those games have cute as an afterthought. We need a seriously strong game that’s fun, functional, challenging but, at the core, incredibly cute. And thank God, Lovers in a Dangerous TimeSpace has finally arrived.

The title alone should clue you into what kind of experience you’re in for, but let me spread it out for you in total, adorable presentation. In the future, Love has been found to be the driving force that can be harnessed to power most everything, and civilization, cosmically, thrives with this innovation. You are a member of the LOVERS, which is a huge acronym that means “person who protects the Love system”, and your job, normally pretty simple (who doesn’t love love?) becomes a lot harder when some Anti-Love fills the system, disrupting the entire balance and throwing things into chaos and unfun times. You, in your awesome spaceship, along with your intrepid crew and/or loyal assistant, must set out to find the source of the Anti-love and get rid of it, as well as save some of the many imprisoned supporters of love, who happen to be cute bunnies.

Despite a pretty verbose title and saccharine sweet graphics, Lovers in a Dangerous Timespace is a fantastic game of cooperation and multi-purpose functionality. The ship cannot and will not be piloted by one person alone. You need someone to work the thruster and steer, someone to activate the shield, someone to check the map, someone to operate the heavy rocket blaster and yet another person to man the five blasters that surround the ship and each have very limited range. What you end up with is a test of cooperation and communication that easily rivals that of Overcooked with a few key, important differences. For one, there is a large range of difficulty settings for Lovers, which is completely welcome for people who are new to the game and the concept. Secondly, this is something where a single mistake can cost you, but only if you don’t recognize it. For example, enemy ships can appear at a moment’s notice on one of your sides and start dealing catastrophic damage quickly. You don’t need everyone at once to rush over and man the guns: in fact, you’d probably end up dying if you did. Instead, you need someone to notice and announce their change of station and everyone else to support them and make that choice happen. 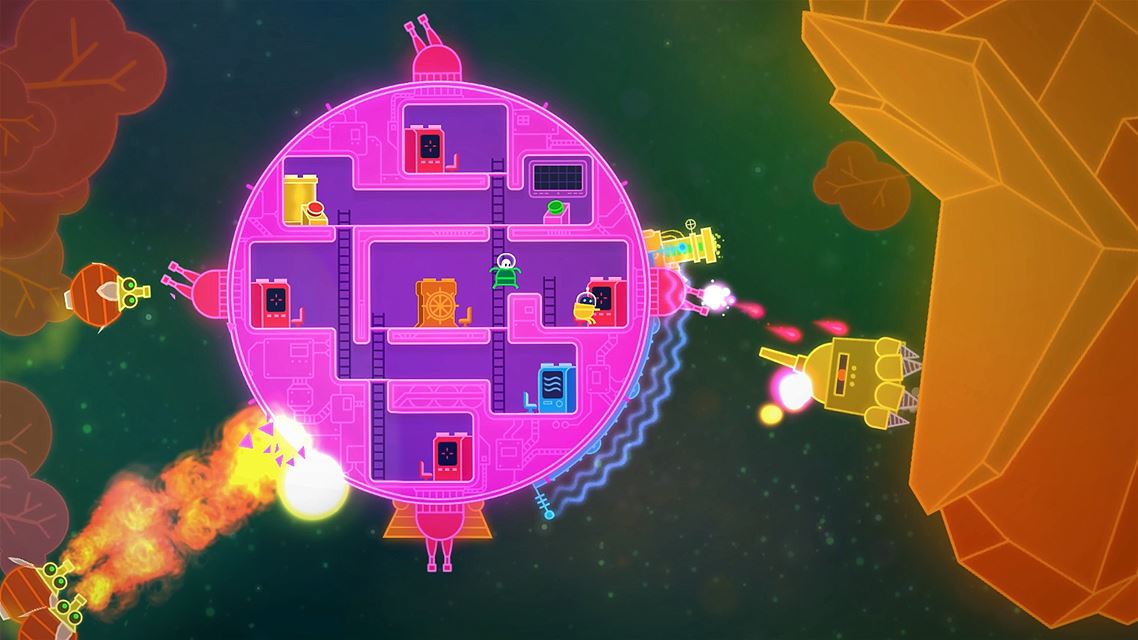 Steering the ship and moving around is fairly straight forward, and, as long as you’re accurate (or at least your first mate is handy with the shield), you can get around pretty quickly between different bunny cages. Lovers in a Dangerous TimeSpace really does a great job of rewarding players who work together by having a plethora of secrets and extra bunnies to rescue, but it’s not necessary. If you’re working on a time attack (or simply want to get through a particularly wonky space field) then that’s all you need to do. Get someone to navigate to where you want to go, someone on the shield and at least one person on the gun that you anticipate will be most helpful. The Yamato cannon does some serious damage (and can even do more), but it’s not reliable enough since it’s in a constantly rotating orbit around the ship. Basically, your strongest weapon is communication.

If you can’t find anyone to play with (or, like me, you like to game at 2 am alone), then the one player mode allows you to choose a helper animal (which is also adorable) to be your second in command. This animal has amazing sense and accuracy but will NOT change stations unless you tell him to. There’s a very simple and quick way to change stations, but the caveat is the game doesn’t stop when you’re giving orders, merely slows down. Therefore, if you can’t make up your mind fast, Lovers in a Dangerous TimeSpace will shoot you out of the air while you’re debating where the space pig needs to go, the shield or the second blaster. Still, I never met a single other player as strong as the assistant animal and, if I could have a ship full of them, I could have finished the whole game in under two hours.

Afraid there’s no replay value for this positively adorable game with some pretty funky (but surprisingly quiet) music? No worries, Lovers in a Dangerous TimeSpace has a great system of finding mystery packages that allows you to upgrade the different stations of your ship in different ways. You can super charge them, make them shoot faster or turn them to “metal,” which has different connotations depending on the station you choose. A metal gun, for example, means you swap out the blaster for a space Morningstar which is amazing to see and does crazy damage to both ships and pesky asteroids in your way. Save enough bunnies along the way and you get to unlock different ships that have stronger potential and different layouts, which may or may not cater better to your play style. I found the original ship was my favorite overall, but unlocking the other ones was a great quest because, hey, saving bunnies. 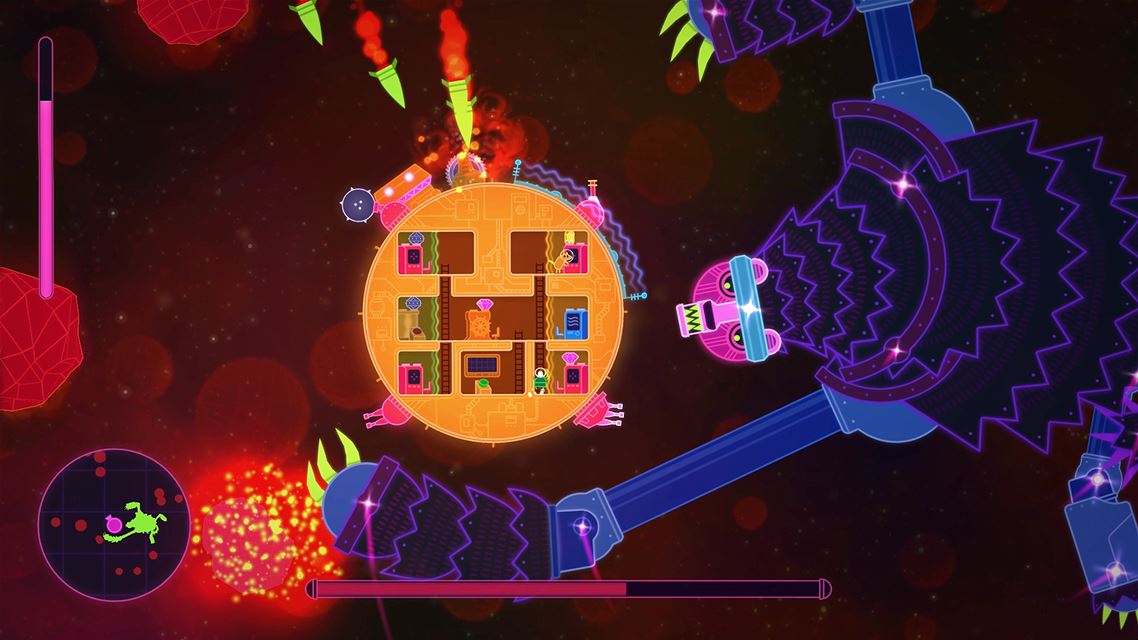 And yes, Lovers in a Dangerous TimeSpace ports extremely well to the Nintendo Switch. Since the multiplayer view is the same as the single player, you have no problem with four little astronauts jumping around the ship frantically, even in handheld mode, and you can easily discern who is who. The JoyCons are still quite comfortable in single con mode, though you may get jumpy and hit the wrong button, leaving your station at an inopportune time (mind you, this is less about the game and more about my own twitchy nature). This is less of a party game, in my opinion, but more of a multiplayer adventure that works best with a group of people who can get together regularly, if not nightly, in order to embark on adventures. The average rescue circuit will take at least 20-30 minutes (for all five stages), so Lovers isn’t something you can just bang out while you wait for the pizza to arrive. This is a good replacement for a night of no tv but we might as well watch Simpsons reruns on FX. The higher difficulties are insanely crazy with massive damage and some really relentless AI, but the rewards of having good time attack scores (as well as good leadership skills) is deeply satisfying.

Overall, Lovers in a Dangerous TimeSpace is a wholly welcome addition to the Nintendo Switch. I realize this is a crazy week for indie titles (I see you over there, Stardew Valley) but this excellent experience should be a part of every Switch owner’s to do list. If you could never enjoy Lovers on the PC or simply never had the time, this is the perfect opportunity to jump in and start sharing responsibility for saving Love across the universe. But do try and have a friend or three with you: there’s nothing wrong with playing alone, but you’ll always have a better shot with the people you Love.