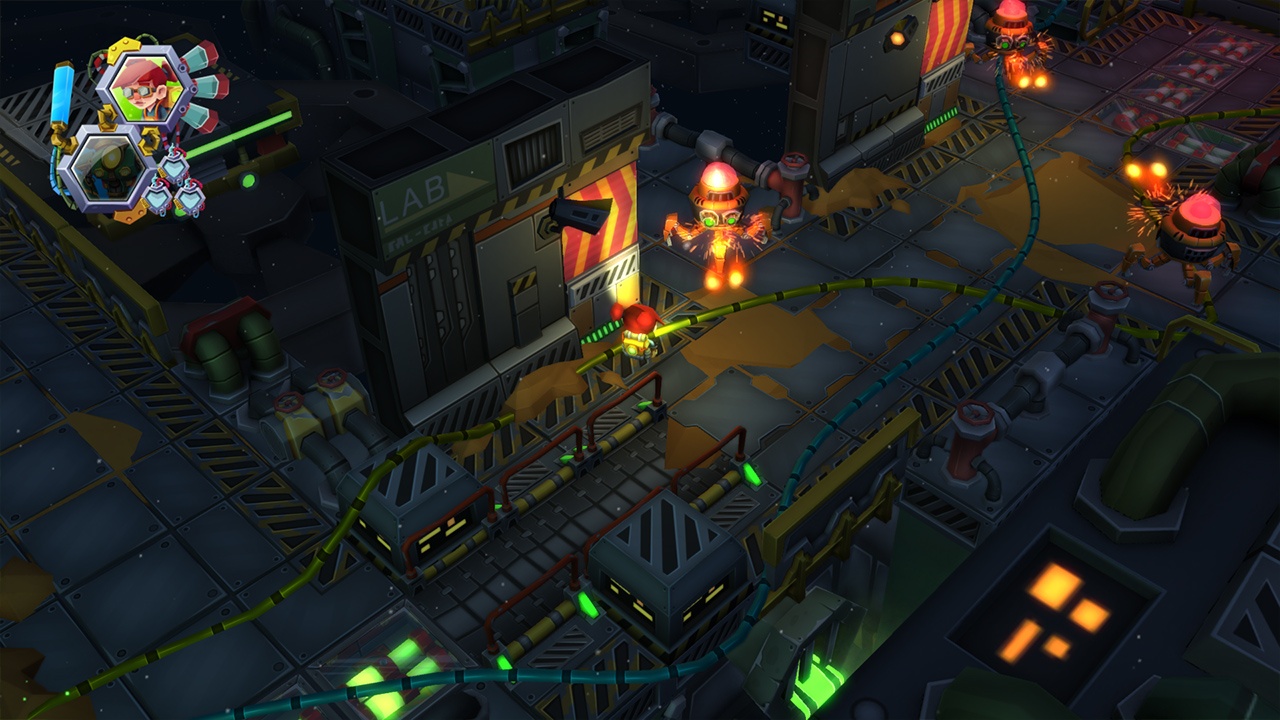 The outside world has seemingly ended and robots now rule this labyrinthian complex. ‘Vesta’ is a puzzle game that takes place in a world where technology has surpassed anything that we could imagine and as our titular protagonist, Vesta has to find a way to get out of this facility and get answers as to what happened to the world.

From the very offset of this game I was intrigued. The initial load screen seemed to be reminiscent of an old school PS2 classic and it’s immediately followed by a menu screen that gives the same impression. I was flooded with the feeling of being transported into a beautifully nostalgic puzzle platformer and as I clicked the “New Game” option this continued as the cut scenes in this game are set out like a comic book and frankly… it’s fantastic.

The introduction to ‘Vesta’ is so incredibly well done and I was enthralled from the second that first loading screen graced the screen of my Switch. That’s, however, around the time where I stopped being impressed. From entering the actual game and being introduced to the characters I became a little underwhelmed. The world of ‘Vesta’ is surprisingly dark and as far as the story is concerned it goes from 0-100 real quick. When you’re introduced to the characters in the game – firstly Vesta and B.O.T – you find that something dire has happened to the outside world and some “protocol” calls for Vesta to venture out of her dwelling and leave the facility. She’s then partnered with another character – Droid – who’s only purpose in the story is to stop Vesta from becoming mince meat at the hands of the unnecessarily dangerous robots that protect the maze-like structure that lies ahead. From this moment on not only does the game feel like a full on escort mission, the story continuously becomes more and more disturbing as the alluding M.U.M awaits at the top floor for Vesta’s arrival. 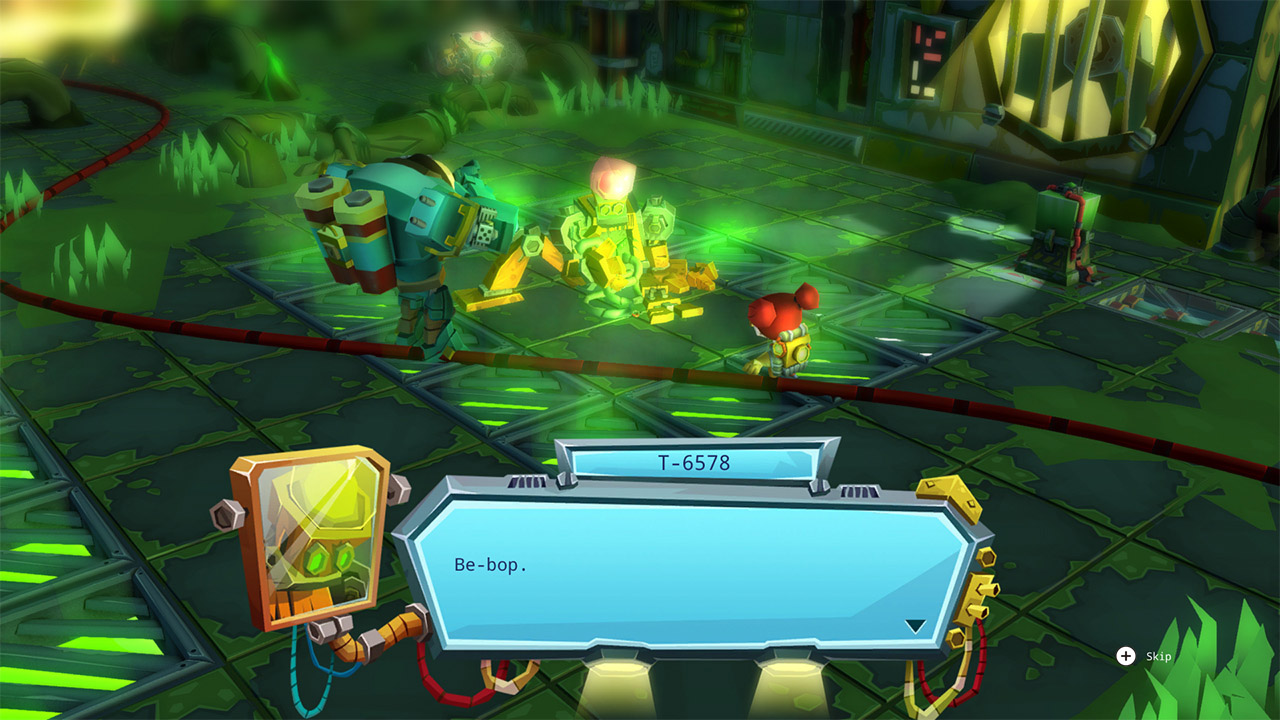 As much as the story and world of Vesta blindsided me I was completely satisfied with some of the other aspects of the game that I’d come to expect from this kind of puzzle game. The difficulty progressively ramps up as the first chapter – of four – in the game can be completed with barely any effort whatsoever but as you move forward you’ll be tested a little more. You’ll have to sacrifice your characters to find the true way to navigate each level and as frustrating as it can sometimes be I have to admit that it is rewarding when you finally get to the Portal-esque elevator at the other side of the floor. For the majority of the time you will be working to find the right distribution of electricity through each level as there’s a short supply and you can only carry so much at once. Supplying electricity to certain points in each level can move bridges, open doors and start elevators amongst other things that will help you traverse the map. The bosses in the game, however, are extremely simple and very easy to beat even as the difficulty of the actual levels increases the boss battles are almost identical each time and most took only a minute or two to complete.

The control scheme of the game is also rather cut and dry. It’s difficult to really go into detail about the control scheme because it’s rather simple, everything you’d expect from this kind of video game. My only real issue is that sometimes when you’re playing as Droid you might try to put Vesta down from your shoulders but you’ll end up launching her across the room and half the time this results in a game over and taking you back to the start of the level… which moves us swiftly onto one of my main gripes with ‘Vesta’.

Checkpoints within this world are ridiculously inconsistent, sometimes a level will allow you the privilege of a checkpoint halfway through but at other points you’ll be forced to go right back to the start of a level each time you die just because some robot hits you when you thought you were out of it’s path. I have no quarrel with a game deciding to be harsh on checkpoints but unfortunately it was as though ‘Vesta’ couldn’t decide whether it wanted to be one way or the other. 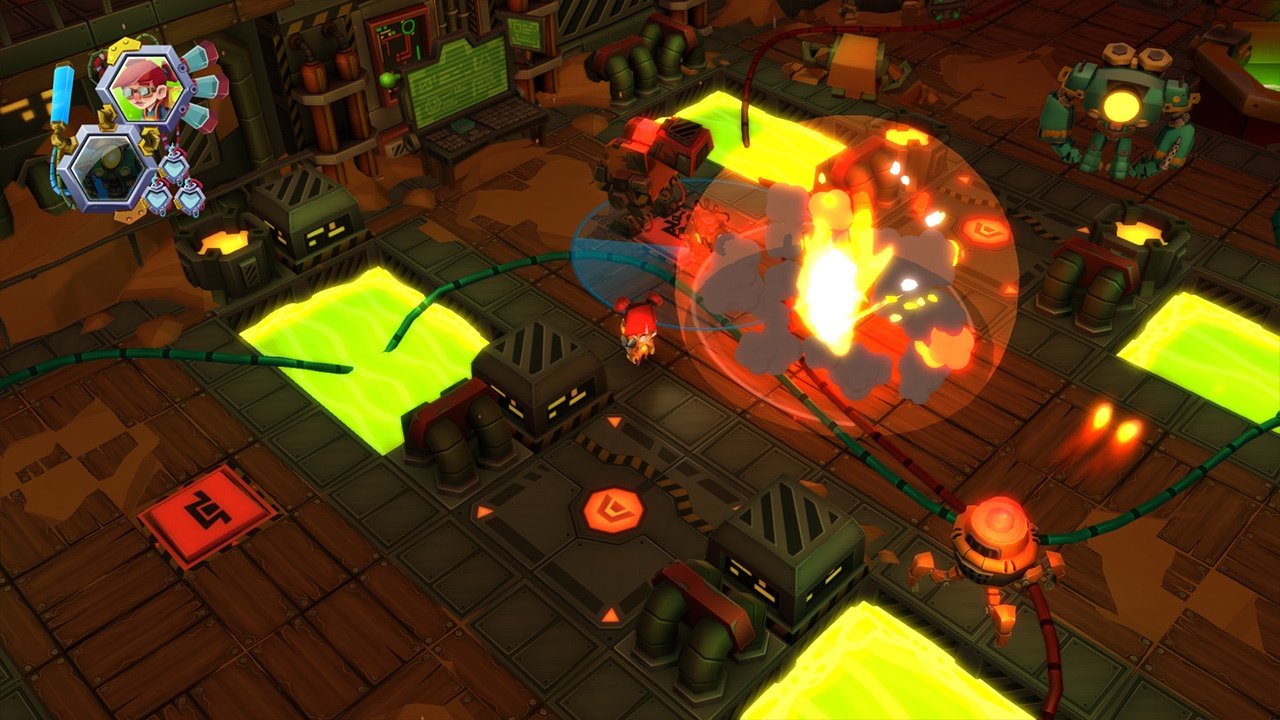 In such a futuristic steampunk environment I expected a lot more from the world of ‘Vesta’ as the game progressed but unfortunately the level design becomes formulaic and rather boring as you continue to see the same objects repeatedly and nothing new seems to surface for much of the game. Enemies are more of obstacles and cause hardly any difficulty within the world. Design wise though I was heavily impressed by the music that the game features. It’s robotic but fits into the environment so well that I found myself sometimes bobbing my head along to the beat whilst I worked on figuring out the latest puzzle before me.

I know that it seems like I’ve spoken quite negatively about ‘Vesta’ and that’s true for the most part, it does fall flat in some ways and I did expect more mostly due to the incredible introduction that you’re offered upon beginning your experience. That being said, I did enjoy playing ‘Vesta’ and I think a lot of people will find joy in this strange tale, if you’re a fan of platforming puzzlers then you’re sure to find something to enjoy in this little adventure.