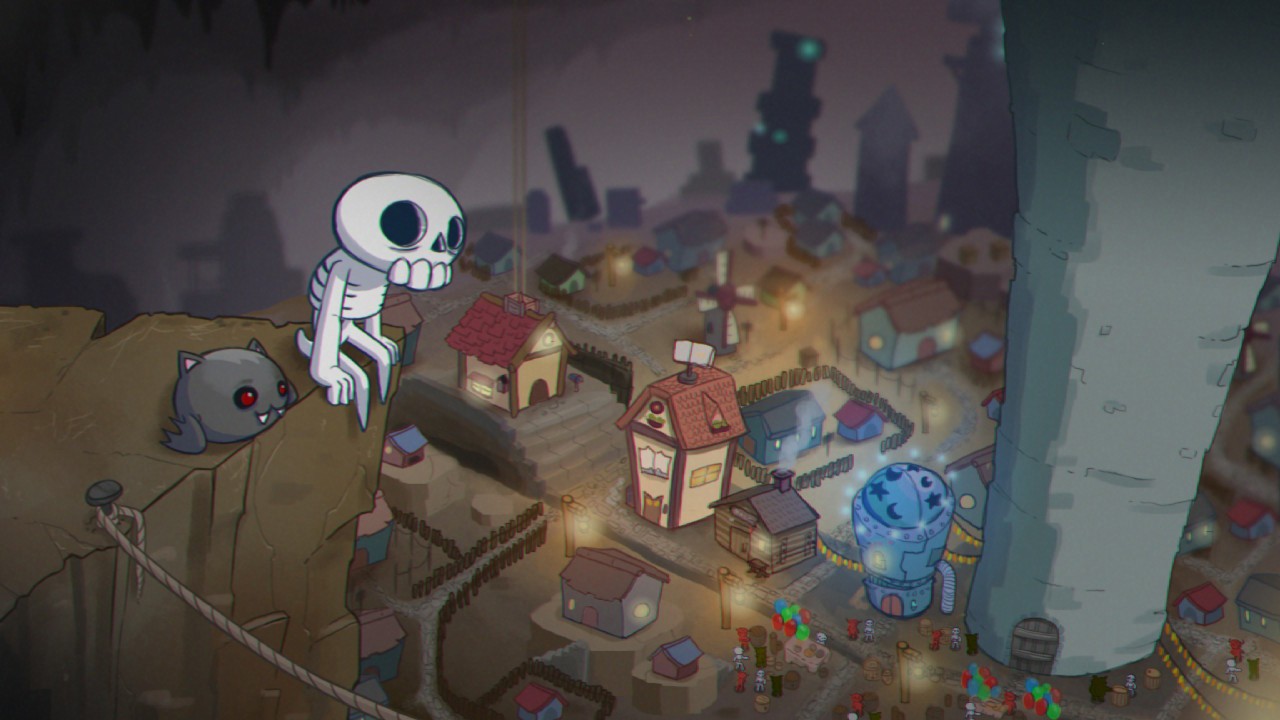 When larger companies throw their weight behind smaller titles, it can mean one of several things. It can mean a company is testing the waters with an indie dev to see how their ideas or style meld with their audience, potentially leading to a greater project. It can mean the label wants to create a supportive but separate entity for smaller titles, such as with the Square Enix Collective (that has produced some truly great games). In the case of Skelattack, it means that Konami saw potential sales from this arguably wonderful looking game and wanted to get it out to everyone, everywhere, and really feel what the repercussions might be. Unfortunately, Skelattack is lacking a bit in terms of the full attractiveness in the package, and, ironically, you’re left with a bit of a bare-bones experience.

Undervale is the safe haven for spirits who’ve passed on, and it’s a pretty cool and chill place to be, despite most of the inhabitants being skeletons. For our hero, Skully, Undervale is exactly where he wants to be from now until forever, but that’s not how things work. You see, the dead of Undervale eventually go through a very special trial and tribulation called The Remembrance, a sort of dungeon adventure where the dead come to terms with who they used to be when they still lived, which is something that you forget the moment you become a skeleton. Skully and his little bat friend, Imber, are ready to partake in the ceremony, and so was I: it was a unique and interesting prospect and could turn into something that was insightful and meaningful. Unfortunately, humans decide to invade Undervale with the express plan of somehow wiping out the dead, because I guess the promise of an afterlife was too much for the living who prefer the sweet, sweet promise of the Void. Anyways, Skelly decides to go save the village Elder, get back the magical Blue Flame that helps guide all the dearly departed through their Remembrance, and ultimately find out who he was (and is), because nothing is a coincidence when you’re the protagonist of a video game. 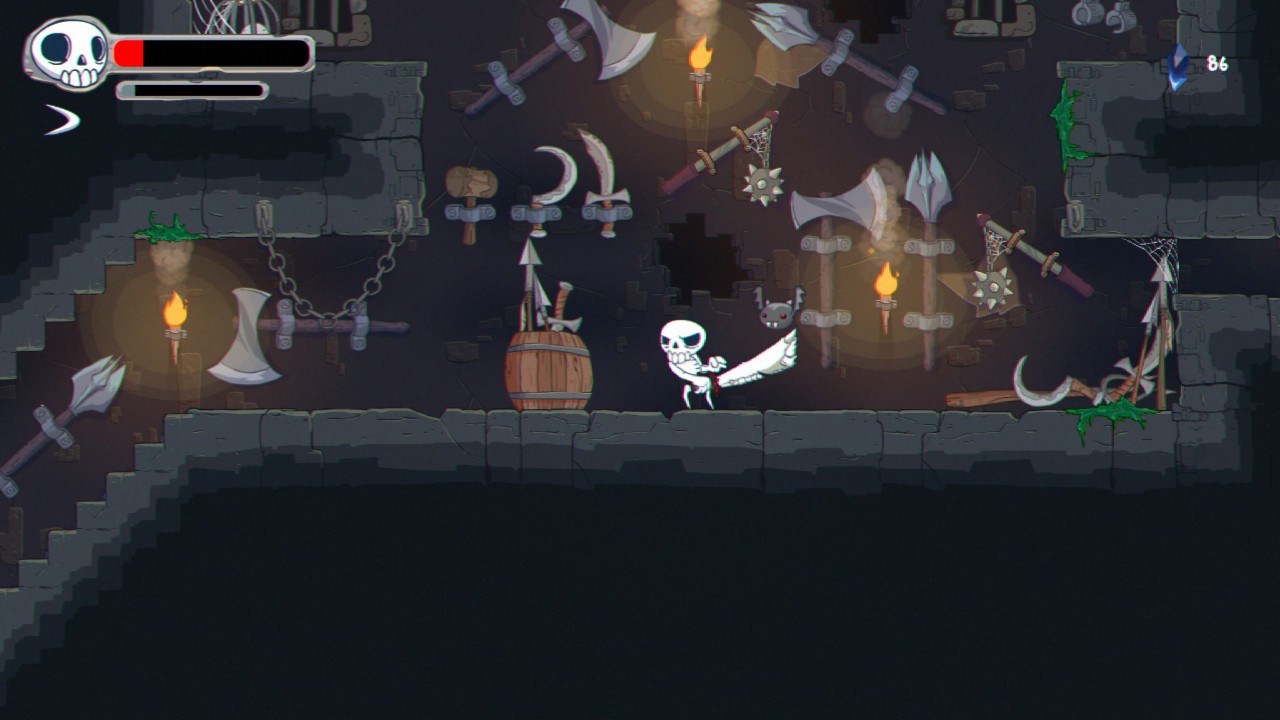 Skelattack, no matter what you might think from trailers or photos, is a platformer through and through, with small elements of action and exploration mixed in. When you get down to the nuts and bolts of everything, a majority of the game is situated on properly being able to navigate Skelly through multiple terrains and levels that involve precision, timing, and knowing what will and will not kill you instantly. Several traps, enemies and obstacles will only deal minor damage to Skelly, whereas others can and will kill him instantly. You have a series of checkpoints that get set up along the way that come in the form of blue flame sconces, though these almost seem arbitrary when regeneration comes into play. That’s because a lot of times Skelly will simply repop at the very beginning of the stage if no blue flame is handy, and early stages have almost no real penalty in terms of distance between the starting gate and the first waypoint. Keep in mind you will almost certainly die multiple times in getting to know this game: there’s even a dude at the tavern in Undervale that keeps track of how many deaths you go through in the course of your adventure.

Skelly doesn’t undertake his adventure as a mere rube. Besides running and jumping, Skelly will also be able to perform some pretty decent wall jumps, swing a mean sword, toss a nifty boomerang, and after a period of time, get Imber to haul your bony ass all over the place. Which is good, because the level design is surprisingly fiendish and clever. While things are nowhere near the level of Super Meat Boy or The End is Nigh, a lot of the platforming within Skelattack puts you in the awkward position where you will need to be fast on your fingers to make things happen in terms of survival. Quite often, timing and seeing the split-second window that guarantees your safe passage from one place to the next is necessary, but it’s not always easy to view the first time around. When I first encountered a stage with invisible platforms that then needed me to thwack on timed lanterns in order to see where I was going, I was in rough shape for the better part of a few minutes, but it all came together eventually. Skelly is a stalwart dude, and it all plays out in the end.

Skelattack does look pretty good, I have to say. The artistic styling and the softer, more hand-drawn edges of the characters lend a strong personality to the game, from the simple skeleton inhabitants of Undervale to the different types of humanoid enemies, the different D&D type bosses and the simple but beautiful level and dungeon design of the game throughout. The atmospheric typing of going from the drab catacombs to the industrial-style factories and then into some pretty impressive castles flows well throughout, and it was an enjoyable visage to behold. I have reason to believe that I would have enjoyed it even more if the game was smoother, but I can’t tell if that was a graphical issue or a porting issue. In either case, a good looking journey slightly waylaid by a minor stutter whenever things got moving. This proved to be enough to make me hesitate some of my jumps and cause erroneous deaths, but not enough to fully derail the overall quest. 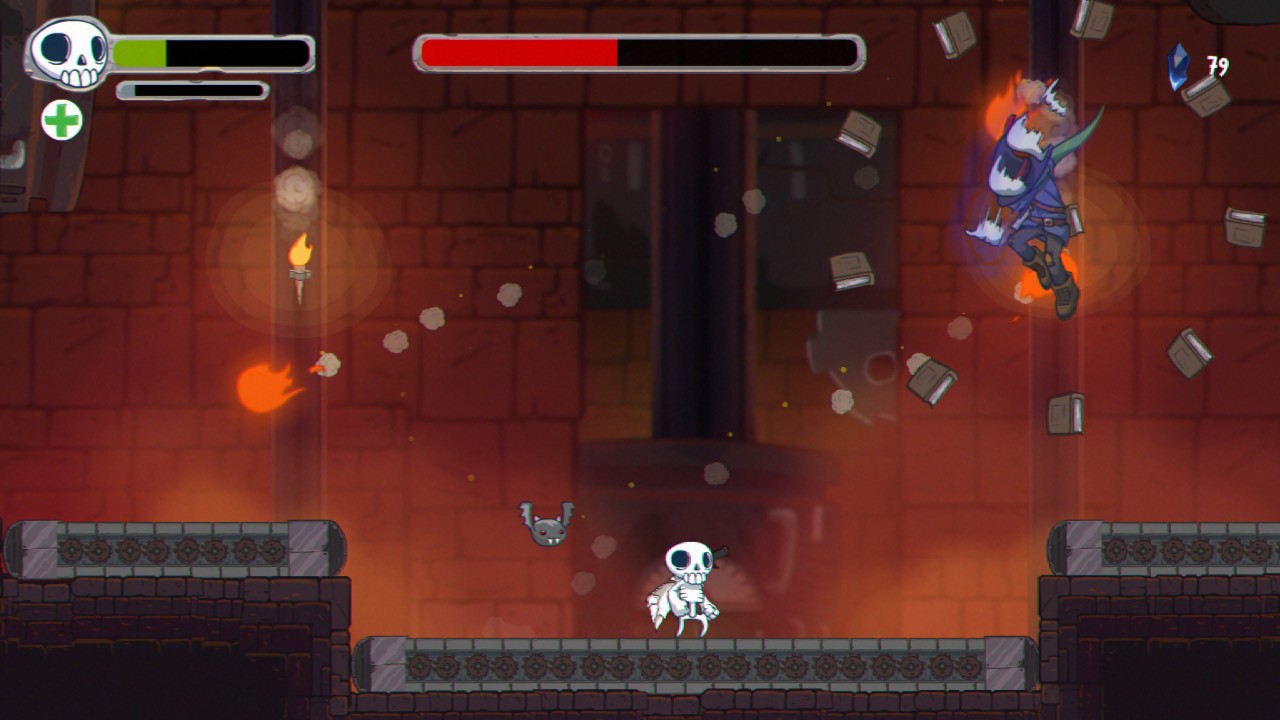 The only issue I take with Skelattack is that there felt like there was something broken in the mechanics, and I can’t tell if that was intentional or not. The double jump is your best friend, spouse, comrade and everything in between. The double jump allows you to climb walls incredibly fast, arc some interesting mid-air redirects and to create unnatural propulsion when you get the angles between platforms just right. I don’t think I was meant to view this game like a speed run sort of approach, but the bounciness and quick refresh of the jump gave me the impression that I should. Also, the bosses weren’t particularly difficult in general, and it only became more apparent the better I was able to bounce around the room like Gumby.  I don’t think bosses should be the hardest thing ever, but you get the tools to defeat each and every boss during the tutorial: as a result, you don’t need to learn more than “jump around, hit them, don’t get hit.” It was cool to occasionally get critical strikes to up the damage or to tag the bard multiple times with the boomerang while annoying the hell out of a paladin, but there wasn’t anything that made me sit up and pay attention.

Skelattack is a decent platformer, with a good length and some interesting story elements mixed in with challenging (intentionally so) gameplay. It’s strong enough to stand on its own, though I feel the Konami publishing label will help get it into more hand than not, so good that Ukuza Inc. has thrown in with this bigger name. I can’t say that it’s a phenomenal experience, but it’s enjoyable and engaging, which is more than I can say for some. If you’re a fan of platforming with a bit more story and substance mixed in, then it might be time to go on the Skelattack.

A surprisingly memorable story about life after death (and life before death!) wrapped into a competent platformer.