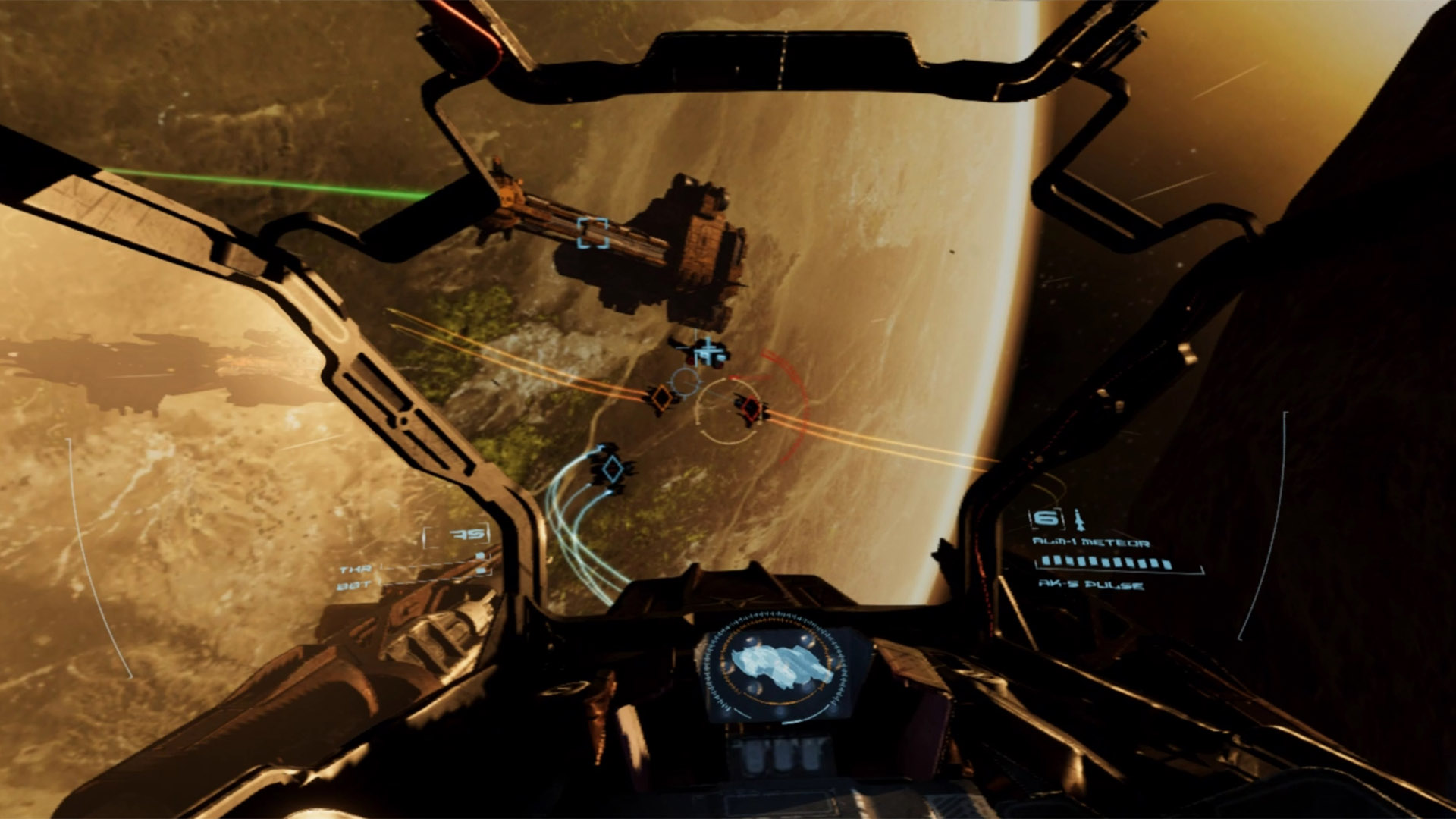 A year into PSVR and there has been some impressive games and experiences, majority have been first person horror titles but there has been a scattering of space dog fight sims including Eve: Valkyrie, Gun Jack and the gorgeous free Battlefront DLC Rogue One VR.

So, one year on and Canadian developer Justin has founded Orange Bridge Studios, obviously spending time playing the current list of Space VR titles he has now added various graphical and mechanic improvements to his original Cardboard and VR Gear title, utilizing the power and performance of Sony’s VR headset bringing a new vision to his top selling game End Space.

The premise of End Space plays very like the previously mentioned titles, you are one of the UTC’s (United trade consortium) most skilled pilots helping to protect their advanced technology from the insurgents of the rogue Tartarus Liberation Front who are constantly trying to interrupt supplies, steal the technology’s secrets or just put a dent into the UTC’s dominance of this sector of space. 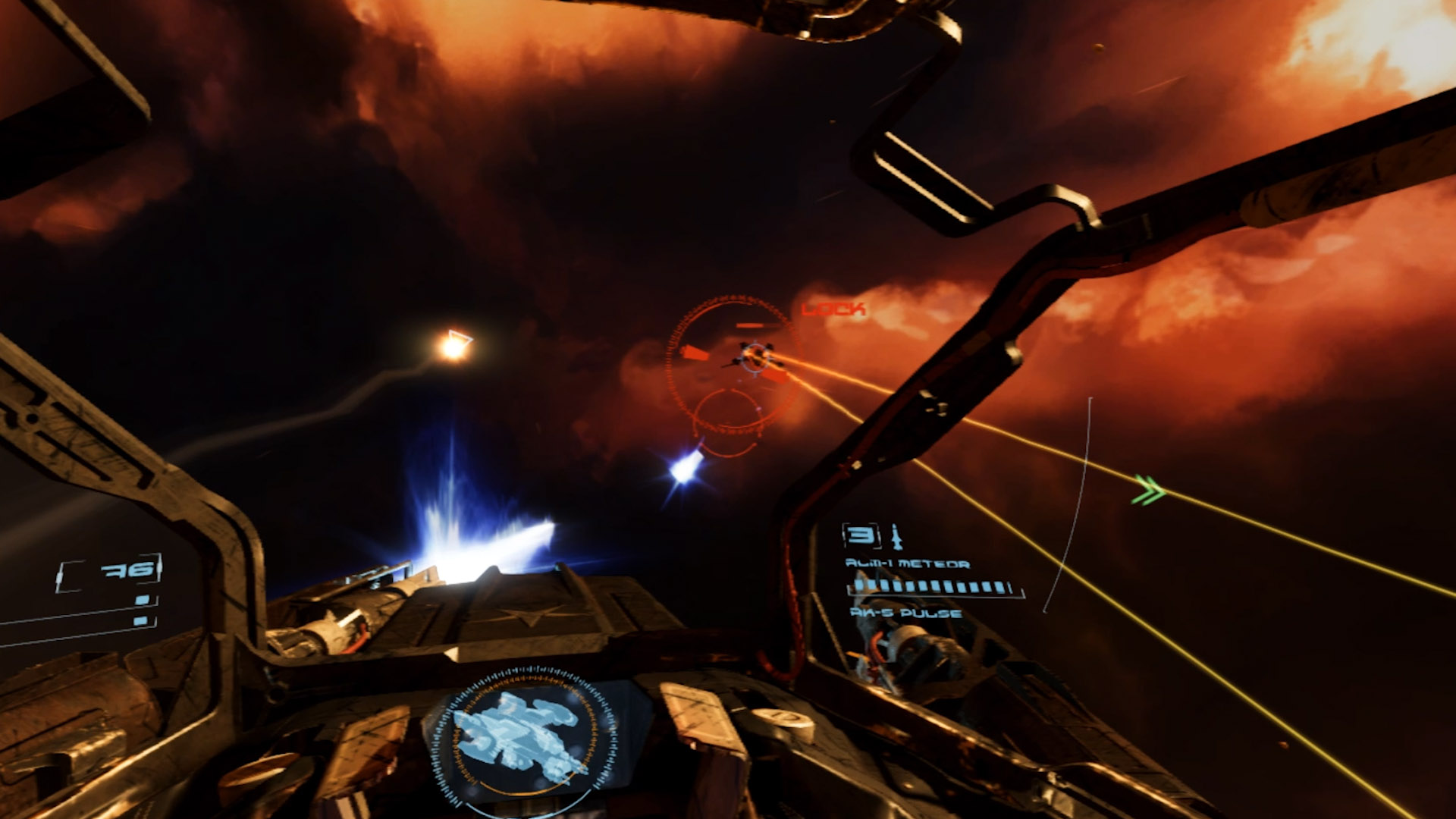 Gameplay sits you in a UTC starfighter and visually it’s very stunning, the cockpit is beautifully rendered with all the expected buttons and lights but unfortunately all are non-interactive, reflections shine off the cockpit windows adding to the 3d realism and watching your graphical hands mimic your thumb stick movements never gets boring, i know this isn’t a new VR mechanic but it’s still fun to watch.

Outside of your cockpit you can’t help but be Impressed by the visuals, surrounding you are stunning planets, moons, meteor showers and at times monster size space craft such as cruisers or mining ships, these are highly detailed especially if you can get close enough to appreciate the effort put in by developer Orange Bridge.

Sound also plays its part in End Space with all the familiar and expected space battle effects we are all so used to hearing from films and game’s, unfortunately I wasn’t a fan of the music soundtrack but that’s my opinion only.

Controls for End Space couldn’t be simpler, your left thumb stick is for direction with the right stick for rotation (I recommend you take it easy with this one as I have a high tolerance to motion issues but the quick spinning soon had me feeling dizzy). Aiming uses PSVR’s head tracking and is faultless but certainly nothing we haven’t already seen in other space flight VR games such as Gun Jack. L2 and R2 are you two weapons – pulse lasers and meteor missiles with the X button giving you a charged boost when and if required but all three need you to be strategic with their use as they are limited and require varying cool down times. 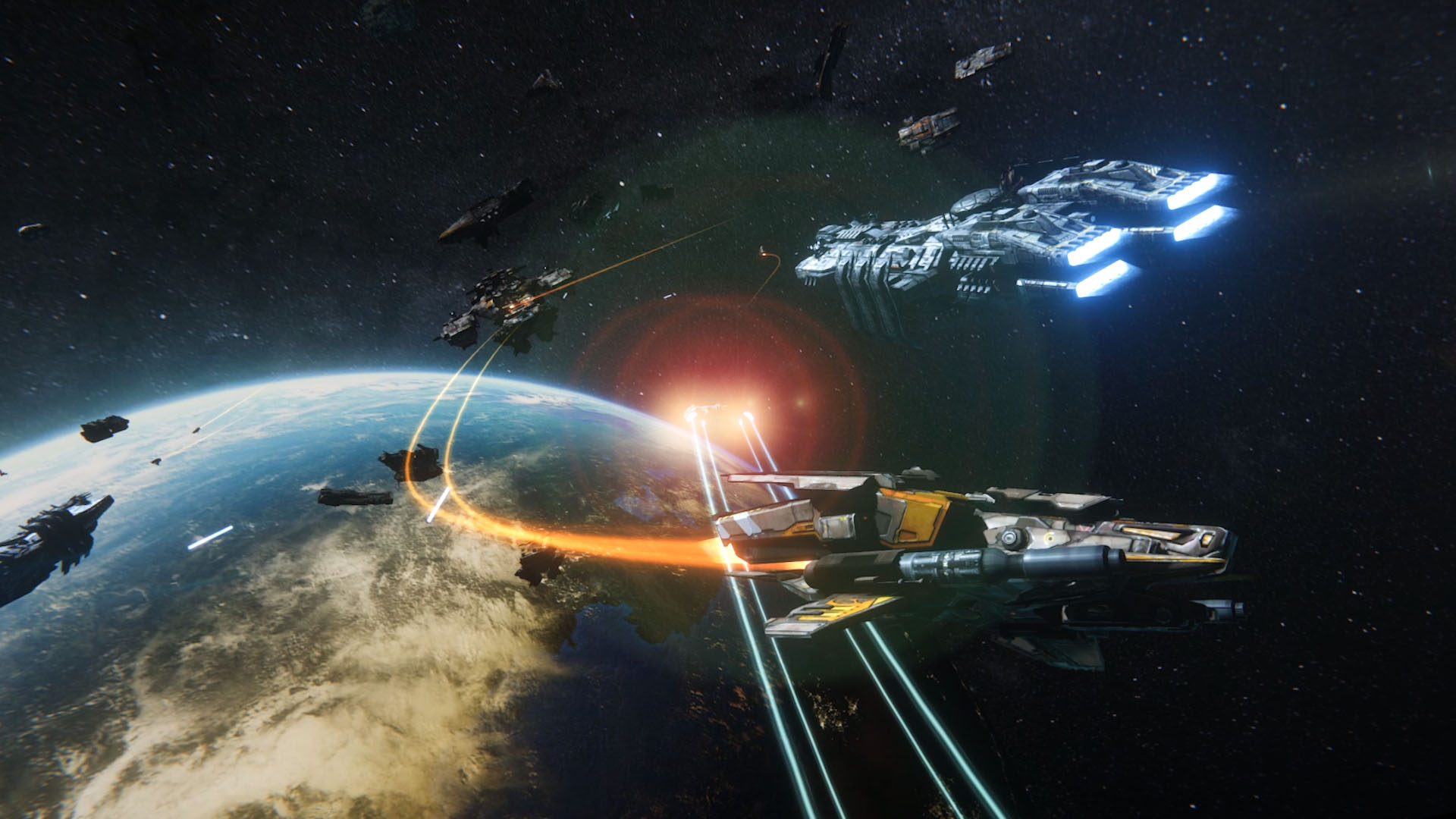 New missions are activated via completion and they progressively get more challenging but never enough to cause gamer stress, in fact this is probably End Spaces only flaw- it’s just not hard enough and you will find yourself charging through the missions at speed and with ease, more so once you’ve progressed enough to unlock weapon upgrades with level earned credits. I finished the campaign in just under 3 hours during one sit in but the game is so fun and easy to play you will boot it up again and again to improve on your previous scores and times.

One thing that surprised me was the lack of online multiplayer but when you think this game has been developed almost single handily you can accept why all effort has gone into the campaign and I personally like the fact the story campaign has taken precedence over online, something I feel the gaming industry have ignored over the last few years and need to address, as much fun as gaming online is sometimes you just want to play alone and enjoy a good single player story, (Thankfully Dice have realised this In time for the new Battlefront).

Overall End Space is a VR space dog fight game that can proudly sit around the same table as the mighty Eve titles and hold its head high. There are no real innovations but what it does it does very well. The simplicity may cause some concern for seasoned Eve or Gun Jack gamers but replay ability is a given on such a fun title so longevity isn’t an issue. And the fact the game is so well envisaged and created by a single developer is nothing short of amazing and here’s hoping it encourages more people to create there gaming visions for the masses. End Space brings nothing new to gaming but with the vast improvements available on the PSVR version and extra visual flare on the Pro i can whole heartedly recommend, especially if you’re a fan of the Eve titles.