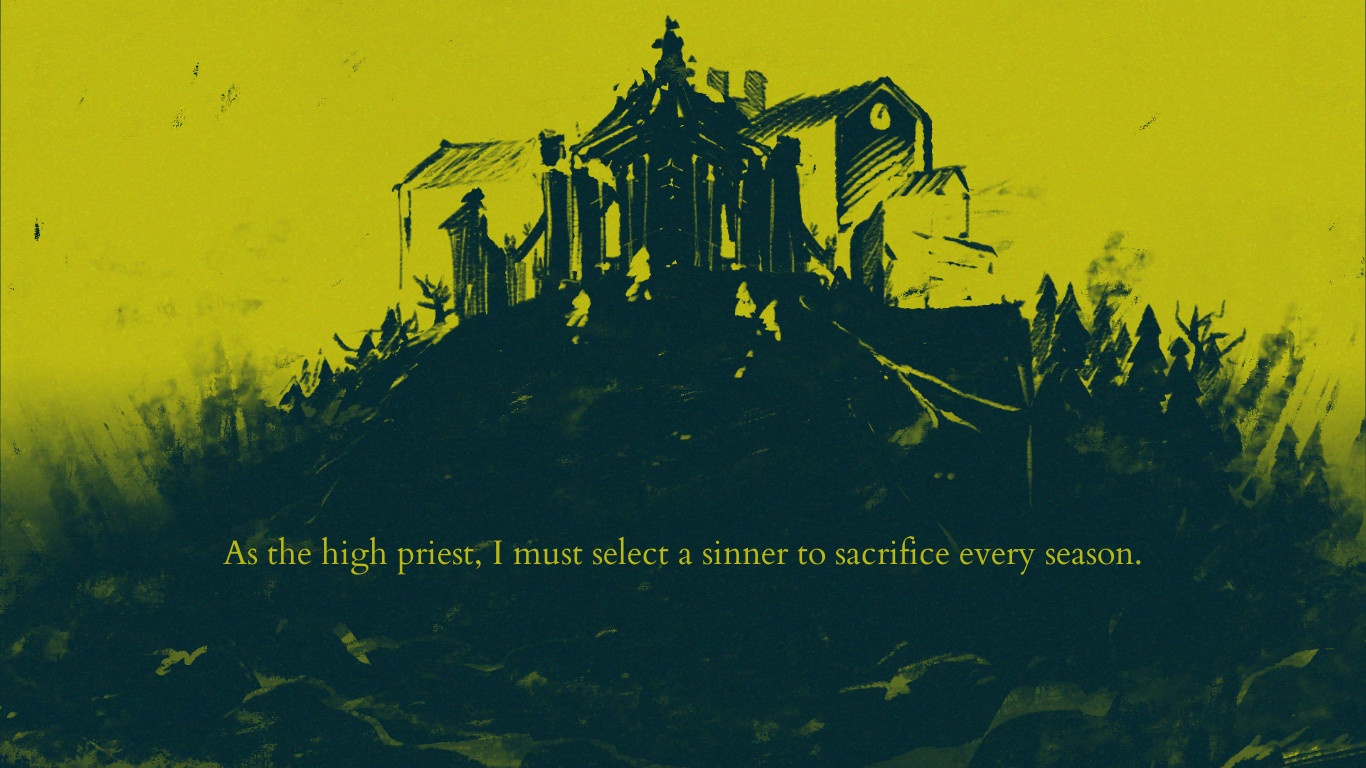 Every small town has its secrets. Maybe it’s the butcher who’s sleeping with his neighbor’s wife, or maybe it’s the creaky old house at the end of the lane that all of the kids swear is haunted, or perhaps it’s the seasonal blood sacrifice to the god Chernobog, so as to protect them from their lord’s wrath. In the case of the unnamed village of Kitfox Games’ The Shrouded Isle, it’s the latter.

At its core, The Shrouded Isle is a management game, not at all unlike the mobile game Reigns. The premise of The Shrouded Isle is that you, as the faith leader of the town, must appoint a member from each of the five leading families to act as seasonal advisors with whom you discuss how to properly keep the citizens in line. Your decisions are all made to balance five attributes of your citizens: ignorance, penitence, fervor, obedience and discipline. In addition, you must also maintain a healthy alliance between all of the families, each of which have a primary focus within the town’s dealings. Being born to a specific family means seems to mean that you’ll be working in the family business; now whether that business means harvesting grain or burning books is altogether a different thing, but both are of equal importance to House Kegnni. 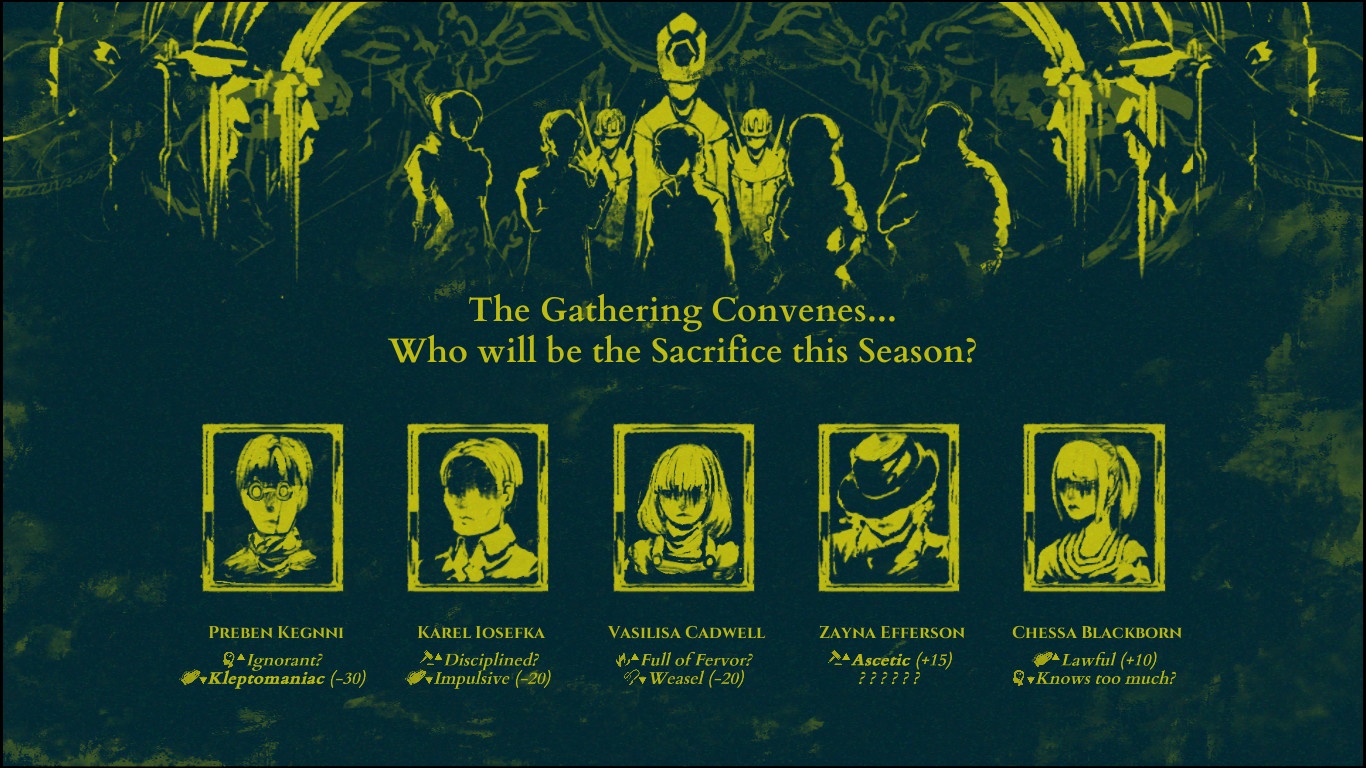 The Josefkas are masons and carpenters, and are often called upon to build sculptures towards the god Chernobog and the Effersons are known for their piety, and equally their penitence, and ensuring the same from all other citizens as well with their regular flagellations. Finally there are the Cadwells — the merchants of your unnamed town– and the loyal Blackborns who protect that sanctity and safety of the town in equal measure. It’s a lot of information to take in at once, but that’s fitting within the context of The Shrouded Isle as the premise is thin, but the lore is rich, and it is very easy to find one’s self lost in trying to make the right decision when there are so many options to choose from.

Balancing the happiness of the houses while simultaneously managing the denizens of your hamlet is absolutely anxiety inducing. Each family member has virtues and vices, some hidden until further pressed and interrogated by your religious order, which have boons or banes to every action. Perhaps Hana Blackborn has an unknown virtue, but is known to be disobedient. You might try to interrogate her to find out her virtue, but in doing so you’ll probably upset her family, and maybe at this point you’re not quite in the best of standing with the Blackborns because you decided that their only son, your former advisor last season, had to be sacrificed for the betterment of the town. I mean, sure he was militaristically obedient, but he was also rabid, so sometimes a hard choice has to be made. 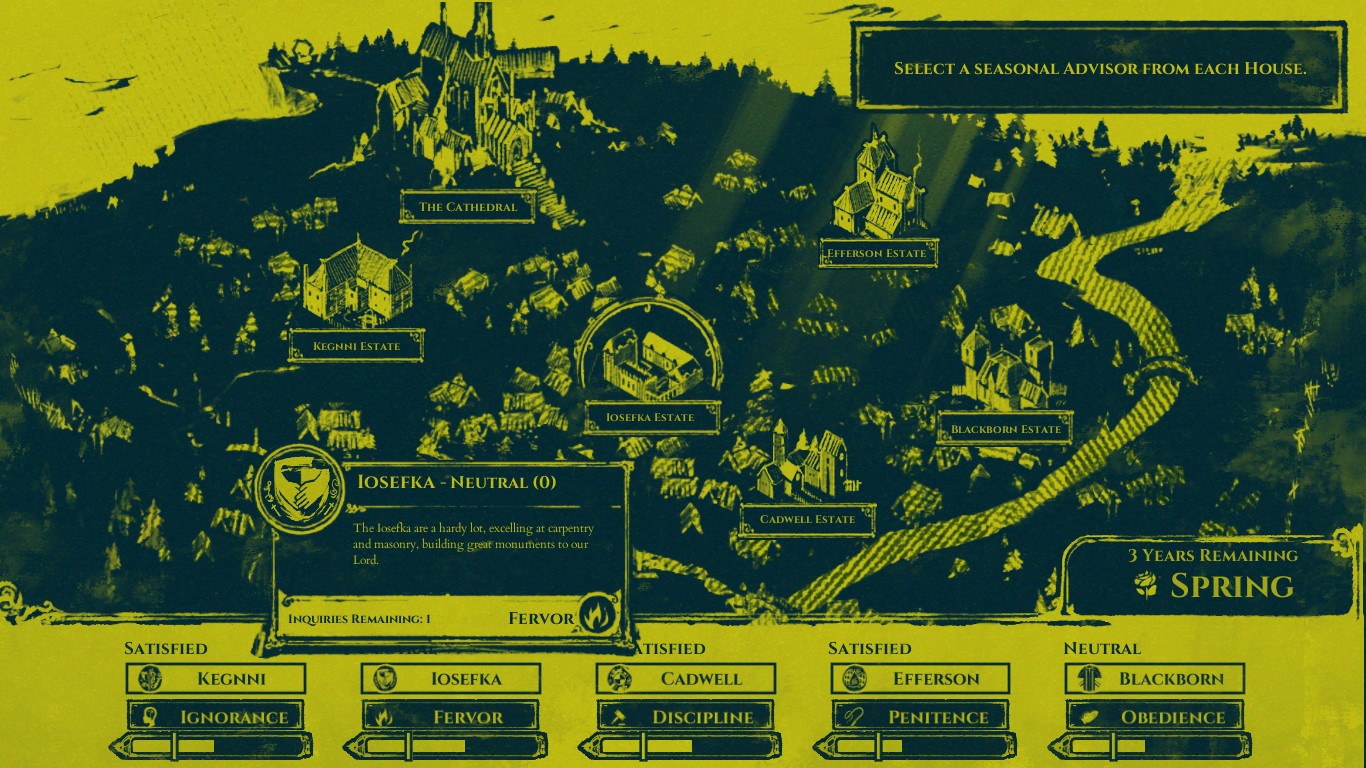 Visually, The Shrouded Isle is unlike any other game on the market. The visuals are all done in two tones with the default being vibrant yellow and a blueish-black that sometimes bleeds into being green at times. It’s a minor attribute, talking about the colors of a game, but perhaps the strongest selling point of The Shrouded Isle are its aesthetics. The two-tone color direction, the repeating dissonant resonance of strings set against simple drums and the faintest of bass, pull the player in and set up a world before them. The town map, roughly, harshly sketched out and making keen use of negative space gives just enough scaffolding to set up an old, colonial village, but leaves enough to the imagination to have inquisitors and colonizers muddling through the streets whispering hushed accusations and projecting their own guilt and sins onto others. I mean, is there really a big, angry god beneath the sea that demands sacrifice, or have you been living on the lands of dead native people your ancestors killed 495 years ago and you’re just trying to feel better about your life decisions? The faces of the family members are all cast in darkness, their eyes scratched out and their faces stern and solemn, and yet, overtime, I find myself balancing out an initial fear of each and every one of them with a mild amount of familiarity. Sure, Vallen Efferson looks like my lecherous uncle after a couple glasses of wine around the holidays, but he also repairs the village whips when they begin to break, and that’s the sign of an upright citizen if I’ve ever seen one.

The Shrouded Isle is unnerving, anxiety inducing, overly wrought with system management and decision making, all while being a solid town management game. Even after a couple dozen runs through the seasons, I still find it wholly difficult to find a balance of which citizens to appoint as my advisors, especially since the choices deplete every bit more with the continued passing the seasons. The difficulty of the game is one of long-term planning while managing immediate consequences. Surviving for five years while keeping everything in your town in working order is stressful and hellacious. Overall, The Shrouded Isle is equally gorgeous and haunting, but it left with me nightmares of decision paralysis instead of eldritch gods beneath the sea.

The Shrouded Isle is unnerving, anxiety inducing, overly wrought with system management and decision making, all while being a solid town management game.

Ryan Cooper no longer writes for Bonus Stage. We would like to thank him for contributing 1 Review during his trial period with us. Reviewers are an essential part of Bonus Stage and therefore we sincerely appreciate all contributions from reviewers/writers who in-turn help to contribute to Bonus Stage's success. We wish him every success with his next venture.