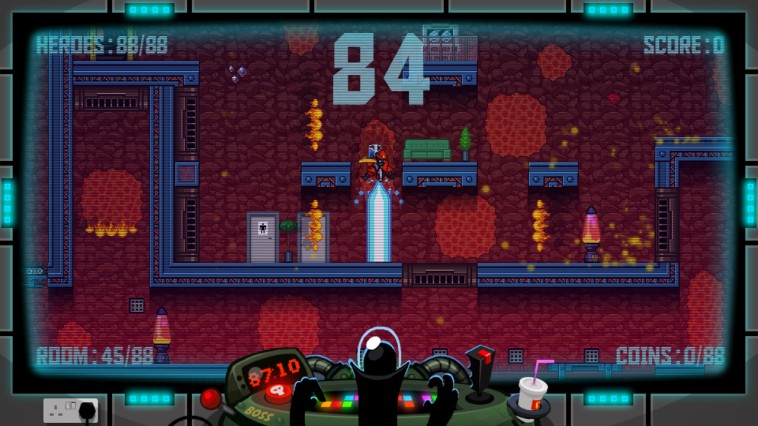 Novelty will take you far in life, and even further in business. You need only to look at things like pogs, fidget spinners or pet rocks to realize that, if people think something is funny, cool or unique, it will be enough to make it off store shelves and into people’s pockets. But then you also need a bit to it in order to keep it around. When my kid’s spinner broke, we didn’t rush out to buy a new one, we just let it go. So there’s also substance with the style to consider, and there was some serious substance considered for 88 Heroes: 98 Heroes Edition.

The premise is ludicrous and also hilarious. Dr. H8 has 88 nuclear warheads aimed at Earth, and he wants 88 trillion dollars in 88 minutes. The only way to stop him is to confront him at the top of his 88 floor building, with only 88 seconds allocated to complete each floor. And since literally every good superhero was preoccupied with something else, we send in the 88 98 heroes who happened to be available. Each realizes that maybe they don’t have the best powers, and, in some cases, no powers, but, together, maybe they can stop this dude.

88 Heroes: 98 Heroes Edition does some things incredibly well. First and foremost, the atmosphere of the entire game is funny and detailed down to a fault. Every single hero that you encounter not only has a blurb of a backstory, but each has a bit of their own voicework that gets piped in during their (potentially short) run up Dr. H8’s building. Dr. H8 himself is constantly adding commentary while he eagerly watches the heroes, rejoicing in their demises and cursing any success they may have. You’ll end up with powerful heroes who could easily have been part of the Justice League (or at least Alpha Squad), and then you’ll end up with…Saxy Dave, who plays his sax and often dies in lieu of doing something. I’ve heard he can actually hit things. I doubt it. 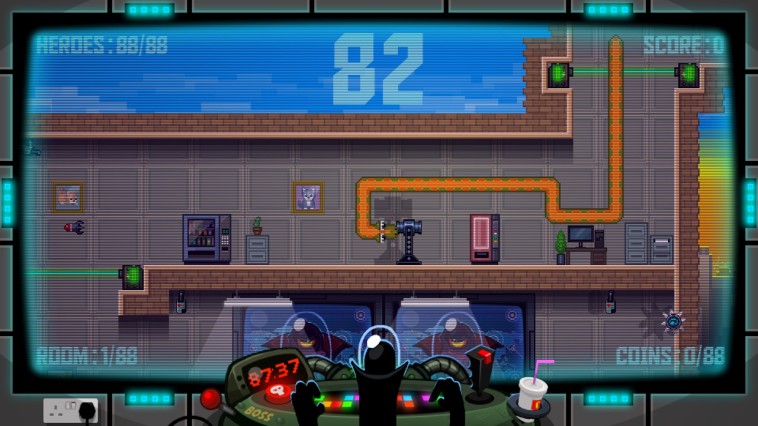 There are a ton of achievements to unlock, most being along the “88” vein of things but several appearing out of almost nowhere. Being able to beat the level without actually following the path gets you “Wiz Kid,” whereas killing yourself enough times (surprise, 88 times) gets “Corpse Junkie,” and plenty of things inbetween. It was great to see the developers bake in the achievements from their Steam version instead of simply just leaving the game barebones as it launched onto the Switch. I know we’re all patiently waiting for Nintendo to give us a nice system like Sony and Microsoft have but, for now, I appreciate individual content creators doing their best to make the best situation for their players.

The game plays out in an increasingly difficult series of rooms with plenty of platforms, traps and enemies. Some heroes are going to be naturally more suited to accomplishing rooms than others: being able to fly, teleport or break through walls will (normally) lead to faster and easier victories, but it’s not always the case. There are some floors that feel outright impossible with certain heroes (looking at the bouncing slime mold with no attack) and you have no choice but to take a hit, lose a hero and hear some mocking laughter. It’s not always a bad thing, but it can be disheartening. Though, to 88 Heroes credit, the bosses are crafted to be defeated with literally any hero. I appreciated that: to understand that the very random nature of the game would be utterly defeated if you simply couldn’t take care of the bosses. As a result, the final encounter with Dr. H8 was a bit anticlimactic, but that was a ton better than realizing that I lost the hero who would do the job several floors back and now I was screwed.

Also, the coins that were mentioned above will give you a chance to bring back a dead hero, but you don’t always get a choice of what you want. If you’ve lost three or fewer, good news, you’re set. If you’ve lost more than three, then you’ll probably need to decide between the ASCII unicorn, the glass ballerina and the US President who has two guns but can only fire them straight up in the air. Yay. Then again, if I could always decide who to bring back, I’d just keep resurrecting Ms. Missile and then there wouldn’t be a real challenge. 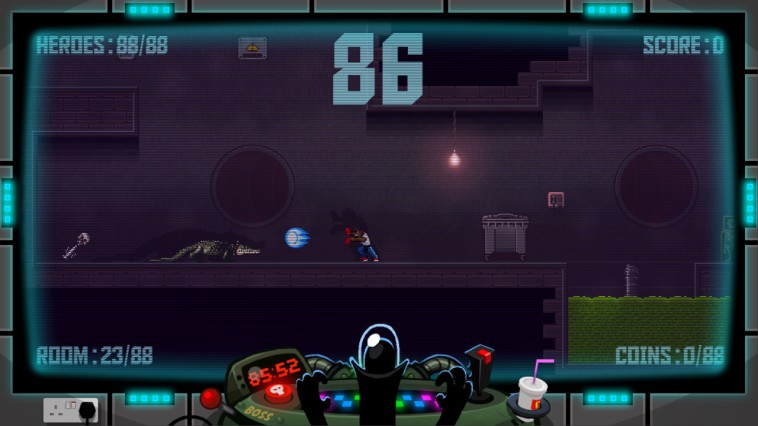 Finishing the main story mode opens up additional modes which I found to be infinitely better. The Magnificent 8 allows you to handpick the eight heroes you want to use to conquer the game, and you’ll definitely have 8 favorites by the time you finish. Solo mode is exactly what it sounds like, and it’s not as bad as you might think. There are a handful of heroes (the Snake, the cyborg with the grapple arm, Ms. Missile) who could probably go very far in the hands of a competent player, just not be. And H8 mode is a harder, more complex version of the story mode with a few extra heroes available, and well worth the challenge for those who enjoyed the main story mode.

Also, 88 Heroes: 98 Heroes Edition includes some great indie crossovers, including Rusty from Steamworld Dig and the Conga Master from Conga Master. Rusty, to his credit, is an absolute beast and could be one of the most viable players for solo mode. He’s a good jumper, a decent melee attack and his pickaxe can break through walls. Conga Master….likes to conga. And he (they?) can jump. It’s hilariously pointless, but, seriously, it fits in well with the rest of the rogue’s gallery. I love when indie devs do crossovers with other titles, and it feels even better here on the Switch.

88 Heroes: 98 Heroes Edition is a very particular title, in my opinion. The developers, Bitmap Bureau, also made Ninja Shodown, which was simply not my favorite. But they’re also responsible for a little title called Super House of Dead Ninjas, a wonderfully difficult experience that had a ton of story and character to it. I think 88 Heroes definitely falls into the latter category, with a large range of difficulty, a really well executed concept and some genuinely funny moments. I think some players would become pretty upset at constantly getting Dr. Detonate as a hero (he has to pick up a bomb and can’t drop it the whole level), but I always enjoy a good roguelike, and what’s the purpose of random elements if they always land in your favor? There is a massive amount of replay available here, and my one regret is not having a physical copy to proudly display on my mantle. This is a damn fun time.