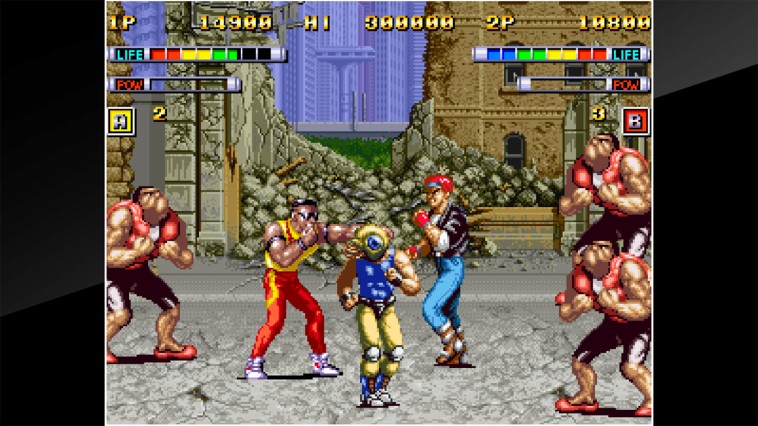 The year is 2050. Some mad scientist dude is busy conducting unethical and frightening genetic experiments, because that’s what you do as a mad scientist. His lab ends up exploding (probably due to poor ventilation) and he vanishes, as well as the horrifying specimens he had created. Now, several years later, these mutated abominations are infecting the populace and turning everyone into monsters. It’s up to two bad dudes who’ve been away but are back now (weird) to fight the creatures, both mutant and the cyborg modified soldiers, to keep the whole planet from becoming a Mutation Nation.

Crappy 90s sci-fi intro aside, Mutation Nation is one of the more compelling beat em ups that I’ve played from the NEO GEO to Switch migration recently. First and foremost, the novel plot immediately leads to some of the better detailed foes that I’ve encountered on the system so far. You’ve got weird, mollusk headed football players, thugs whose heads melt and they become rat people, and freaky green plant ladies who were in the middle of their 90s jazzercise class when they turned, because why else would you be in a unitard. What’s great is you have a wide, wide variety each level, and, although you may see some repeats, there’s enough color change and general differences to keep it interesting. I will say I was confused about the most common grunt, which is the muscular, Freddie Mercury looking characters who weren’t mutants. Seriously, I guess they were supposed to be low-level cyborgs or something, but all they had were mustaches and tank tops. No worries, just weird. 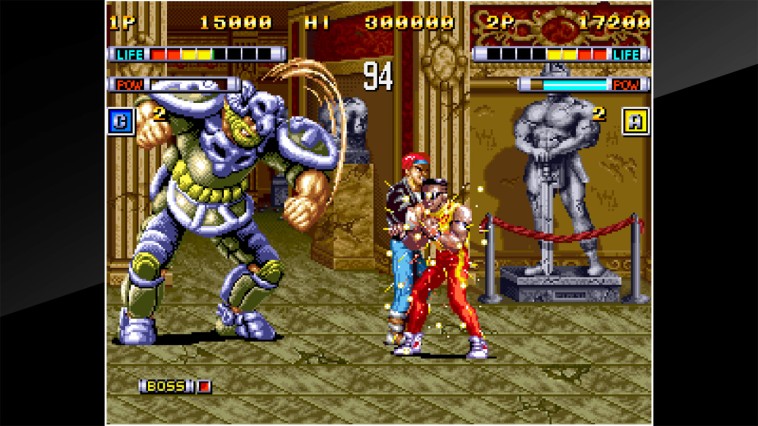 Action wise, you’ve got two buttons to worry about: punch and jump. When you jump, you kick. When you get close, you grapple. Pretty standard stuff, but it’s about the motion, not the meat. Mutation Nation is quite fluid in the execution of their hit combos, and enemies who get sucked into a four count punch fest tend to go down and stay down (often exploding into puddles of green goop). The grapple hit will knock them down but rarely is enough to eliminate them unless you grapple five times in a row (ill advised). The jump kick can sometimes stun enemies, but it can also lead into the punch combination. I actually found myself really getting into the groove of things pretty quickly and enjoying the smooth nature of the combat. After the clunkiness of Robo Army (which, to be fair, predates Mutation Nation by almost a year), this was refreshing and quite enjoyable.

Mutation Nation also includes a powerup move that alternates between four different forms, each represented by a letter. You’ll find these scattered throughout the game, dropped by enemies, and you can recharge the power move with blank energy obs that also occasionally drop. You have a max charge of four, and it’s a little tricky to pull off. Basically, you hold down the punch button until a gauge is full, which means not punching anything for about three seconds. In a game like this, that can be murder, but it’s not impossible, just inconvenient. Each move is quite flashy, from turning into human lightning to throwing a massive plasma ball, but each has the same effect: mass room damage. It’s more than enough to take care of the average foe, but not enough to seriously impact the bosses or mini bosses. Use them when you can to help clear the room, but don’t plan on it being an ace in the hole, especially since the bosses will hit you a LOT before you can power up.

Lastly, the presence of the life gauge will confuse a lot of the SNK brawler fans. Rather than being able to take a couple hits and having three lives, Mutation Nation gives you one life and about six or seven hits worth of health. I saw that I healed up a little at some point during one fight, but I have no idea how. Did I pick up something? Did I punch someone enough to feel better? In any case, I think I’ve gotten accustomed to taking my licks, dying and then having a moment of invincibility to get my bearings. That’s simply not the case here. If you get knocked down, you get up again immediately and can get hit, again, immediately. If you die, it’s the continue screen for you, but at least I didn’t need to do that too many times. 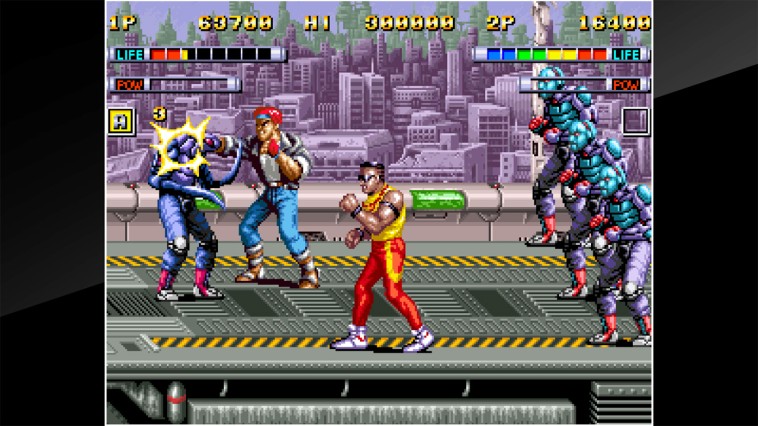 I gotta bring it back again to the appearance, because I feel like it’s worth the price of admission alone. Mutation Nation is seriously novel and cool looking, and I don’t think there was enough of this level of risk taking back in the 90s. One of the first bosses you fight is this big Odin looking bastard who throws his weight around a lot. After you think you’ve defeated him, he mutates this huge reptilian skull in the middle of his chest and now can punch you as well as strike you with the skull. It was pretty badass, and that was par for the course for the remainder of the (arguably short) game. Most of these older SNK titles either live on because their sequels are still around today or they’re cool enough that they’ve been ported on their own already. I’ve never played Mutation Nation before and I was instantly hooked. It felt like it could have come out on the Steam storefront TODAY and would have been pretty well received.

There is no higher praise for a NEO GEO port to the Switch than what I’ve said previously. This isn’t just a retro experience, this is a damn fine game as it could stand in today’s fare. I know everyone’s eyeballs deep in Mario Odyssey (AS WELL YOU SHOULD BE), but don’t forget about the little titles that are available too. If you want to keep surfing that awesome wave of brawling goodness and wouldn’t mind hitting a couple of shark dudes and a weird spider woman along the way, come defend the future in Mutation Nation.