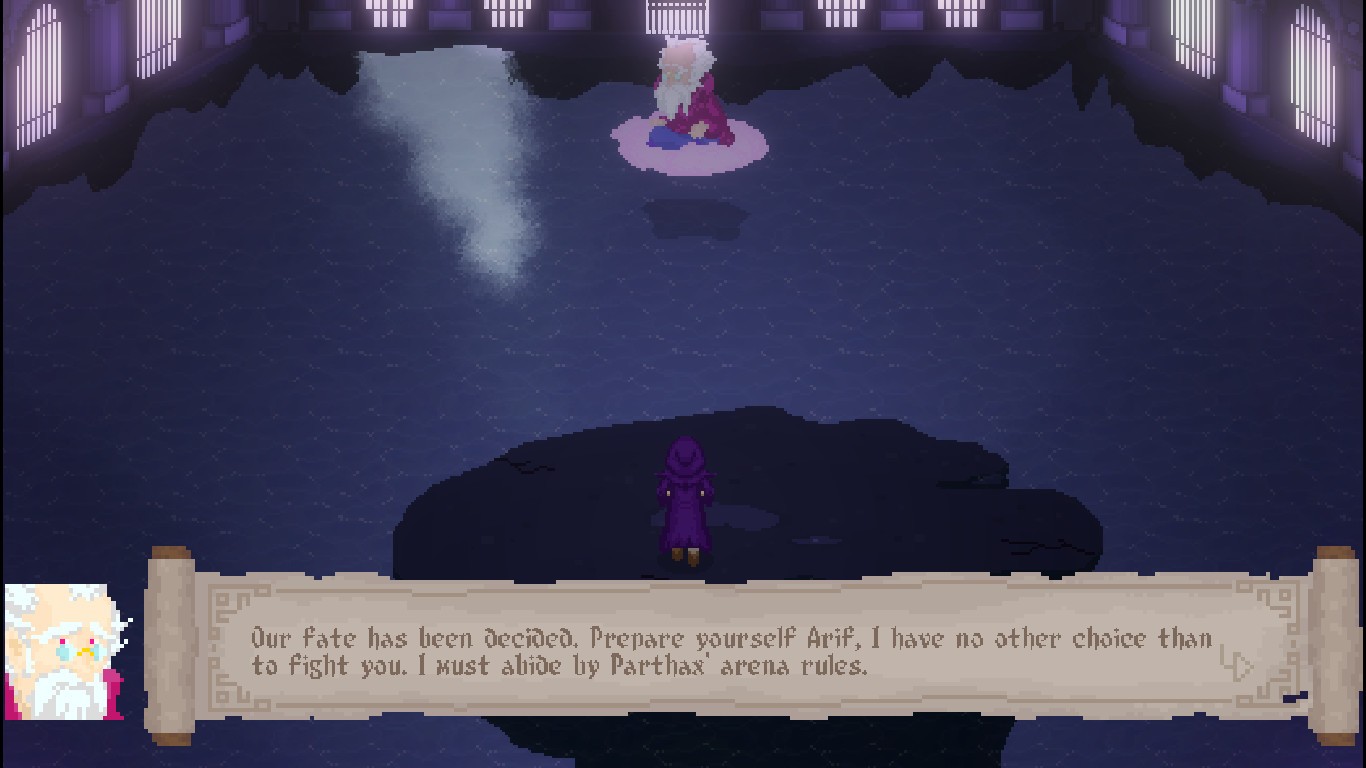 Magic is a staple in fantasy games; it has always been there in different shapes or forms. Some games use it in a standard way with a few spells, others try to innovate. Games such as the recently released Noita and, of course, Magicka are absolutely focused on messing around with spell combinations, mixing and trying until something works out. Gift of Parthax is one of such games, giving its players freedom to make unique spells with slews of different effects. But how does it hold up?

After a civil war erupted, mages were hunted and captured, thrown into the arena to fight to the death. Players control Veleus, a young mage on a quest to save his best friend Arif, who was almost killed in said arena. By facing the same challenge Arif did, Veleus hopes to obtain the grand price to save his friend: a gift from Parthax, master of the arena.

The game’s story is not particularly deep beside the initial information dump. It only advances a bit at a time every few levels, which barely does anything to make it interesting or immersive. It is mostly used as a way to get the game rolling and then sidelined by the thing the game focuses on, its gameplay.

Something similar can be said about both the graphics of Gift of Parthax, which are rather underwhelming. Made in a high-density pixel art style, the general look of the game is nothing particularly pleasing to look at. Luckily, both spells and monsters are unique, with the rather ample variety of both compensating for the otherwise dull presentation. That said, there are other issues, mainly the deceptively big sprites which do not match the hitboxes, these often being way smaller than what could initially be believed.

The sound in Gift of Parthax is quite decent, with an alright soundtrack and well made SFX. The music mainly fades to the background following in line with the “action music” style, only being used to accentuate the battles. Most attacks, both from the player and enemies, have their own identifiable sound effects, which helps discern what is going on in the arena. 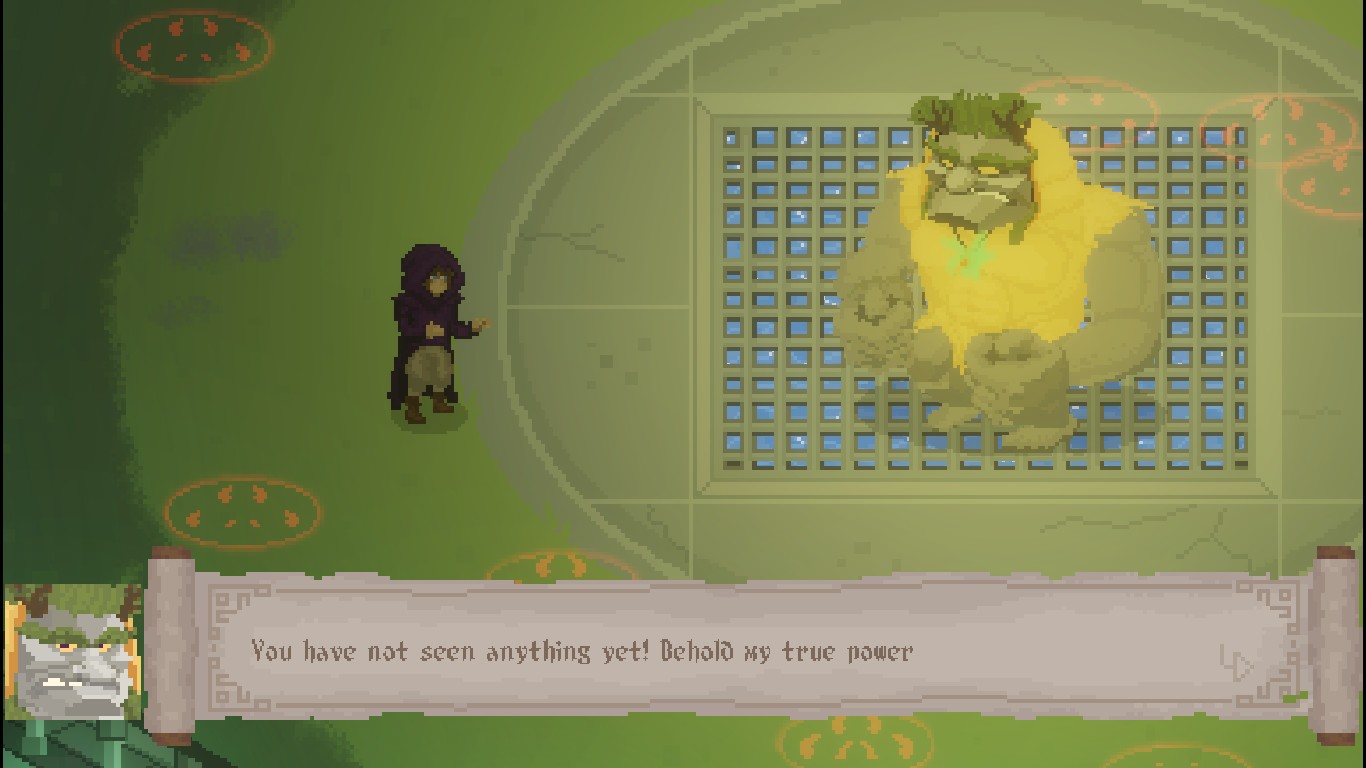 Gift of Parthax’ gameplay is an arcade-ish arena fighter, where enemies battle wave after wave of enemies. The game is divided in several sections which will be referred to as “seasons”, due to their names. Each of these seasons features a slew of monsters matching the theme, with Spring including greenery and plant enemies or Summer including dragons and living fireballs.

All seasons are also divided into several levels, with increasingly more waves and enemies to battle against. On the last level of each season a boss can be found, each of these being spellcasters wielding spells similar to the player’s. The boss fights are themselves divided into phases, depending on the health of the boss and the time passed.

The main mechanic of the game is modifying spells, which can be done by purchasing runes at the shop. These runes are limited in use to certain types of spells, but are usable for all spells belonging to said types. For example, traps can be modified to attract and ensnare enemies, while rock spells may poison or stun. What this means for a rock trap spell is that any of these effects can be granted to it freely.

While this system is quite welcome, certain effects blow everything else out of the water. With no handicap or downside to using them over other things, a lot of different effects end up becoming forgotten, since the player has no reason to change. It could be assumed that the different spells would be more or less effective against different enemies, but such isn’t the case. The basic fireball effects deals the same damage to a plant than to one of its living cousins, even being able to “burn” both of these (The quotes referring to how absurd the concept of burning fire itself is). 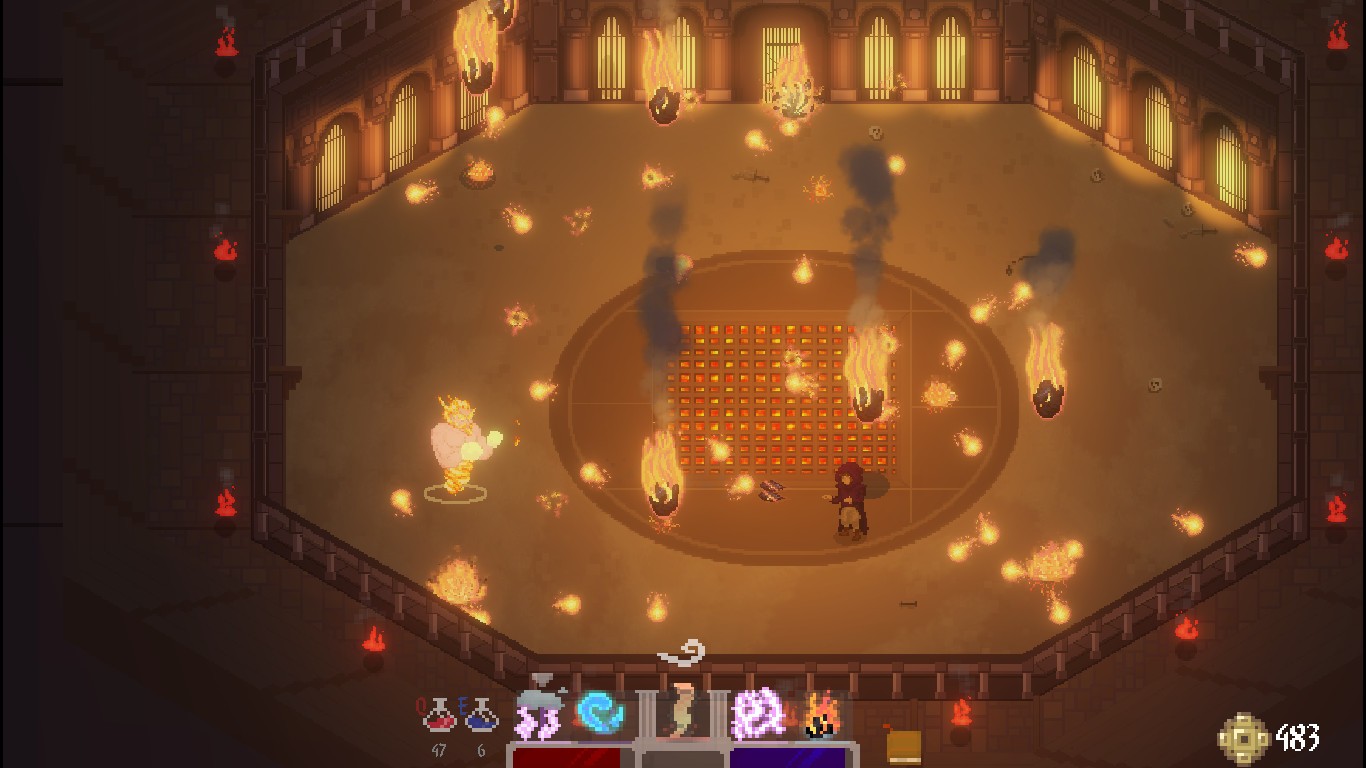 All spells consume mana to be cast, with a few effects increasing the standard cost. Once the player runs out of mana, they won’t be able to cast anything. This resource regenerates over time, ever so slowly and can only be sped up by consuming a mana potion.

Besides their spells, the player also has two more tools at their disposal, these being the already mentioned potions and a dash. The first are rather useless, regenerating tiny amounts of their given resource over long periods, with spell casts or enemy damage undoing any effect instantly. Luckily, the latter isn’t useless, offering instead a great deal of mobility to compensate for the sluggish speed of the character.

“Sluggish speed” could also be applied to the gameplay itself, which is quite slow at itself. The lack of mobility besides the dash combined with the awful hitboxes mean players will often be hit without any possibility to evade. On top of the seasons’ reutilizing enemies over and over, combat becomes quite old outside of trying out new spells.

Something worth mentioning would also be how the game’s death system works. In normal mode, players lose money and “knowledge”, the latter being used to increase their mana. What this means is that at certain points players will be forced to repeat previous levels over and over to afford anything. After a while the game often becomes a race to see if the player can kill the enemies fast enough, being unable to rely on efficient healing which they may even be unable to purchase.

In conclusion, Gift of Parthax is a very mediocre game with a good idea in the shape of the spell modification and nothing else. The $/€6.99/£5.99 it costs is not an excessive price, although the very little it has to offer makes purchasing it during a sale, if at all, more than recommended.

Gift of Parthax is a very mediocre game with a good idea in the shape of the spell modification and nothing else.