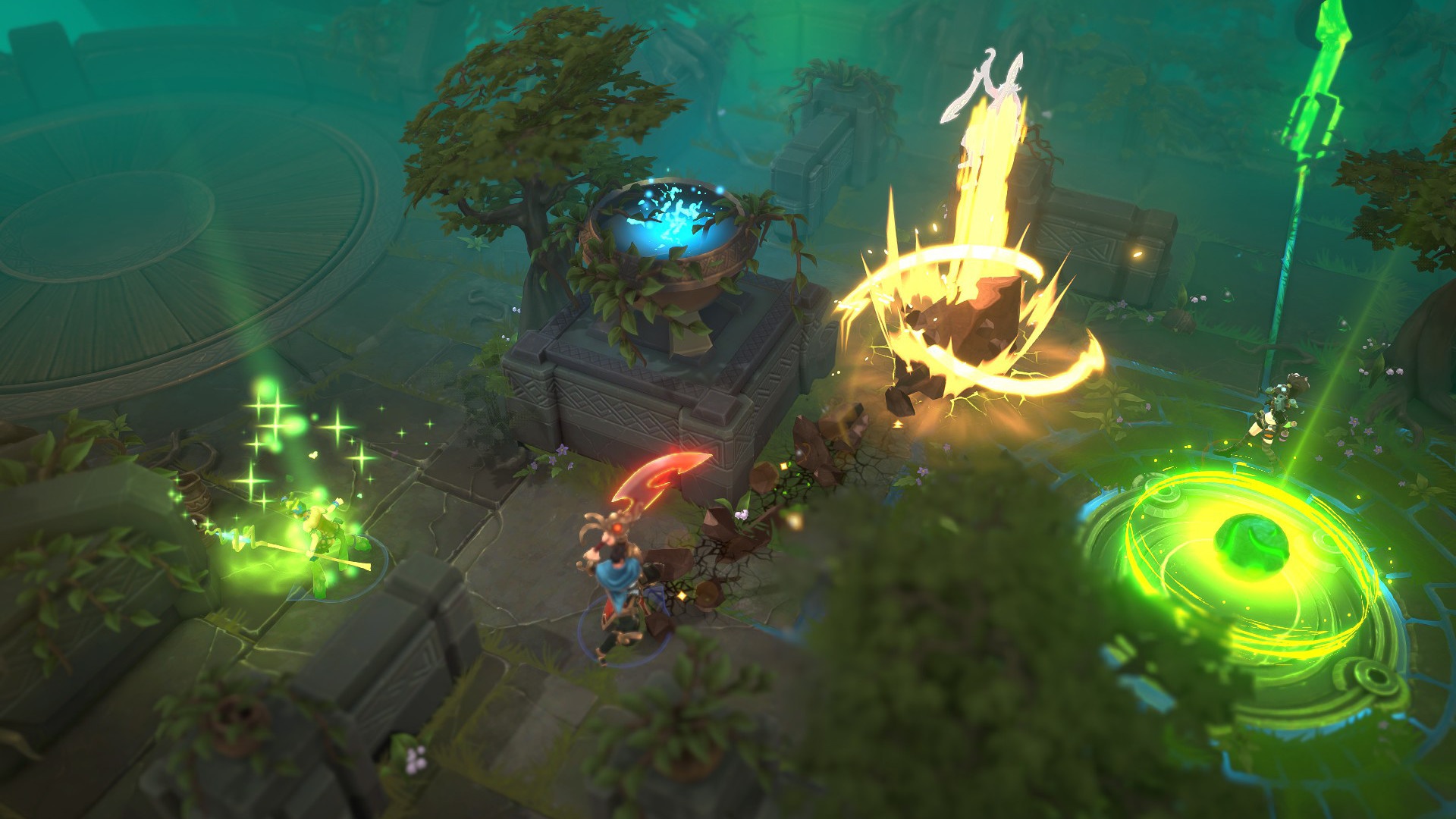 MOBA style Battle Arena games can feel like a dime a dozen these days, but Battlerite’s recent step into the F2P market has opened up a whole new community for this action-packed title. And while much of the content and characters feels like a hybrid of League of Legends and Dota 2 paired with some novel new inventions, Battlerite has a lot to offer savvy players.

Battlerite breaks down into typical Battle Arena style mechanics: Players can go into matches vs. A.I. or other players, in Ranked and non-Ranked play. The inner landscape of the arenas is colorful and of a good size; the space feels small enough to force frantic gameplay while also being large enough to encourage tactics and strategy with your teammate(s). The battles are a Best of Five competition, and once you’ve chosen your team of characters, there’s no changing it up.

The roster is one place that feels heavily inspired by League of Legends. My friends and I joked that most of the Champions available in Battlerite are a combination of two League champions. For example, Jade — the character you meet during the tutorial in Battlerite — seems to be a blatant lovechild of Ashe and Miss Fortune. Even Blossom, a Satyr healer with sass, has a costume on Battlerite that makes her look almost identical to League’s Soraka. There is also the newest character, Thorn, whose plant-oriented theme feels like a combination of Thresh and Zyra. 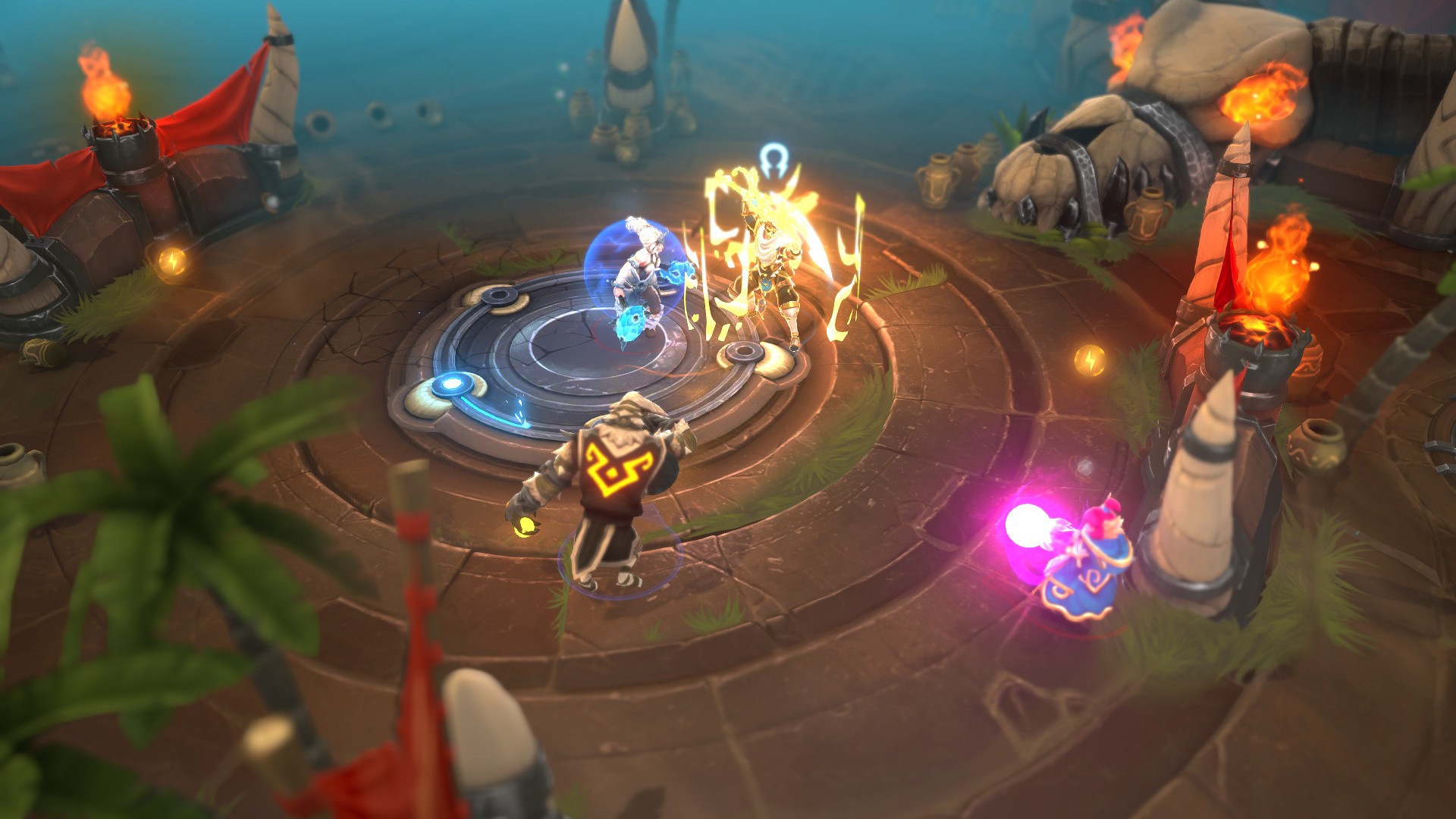 And yet, despite the similarities, Battlerite is merely fun. The matches are fast but brutal, meaning that you aren’t committed to 30-50 minutes unlike a standard game of League. You can get in and get out quickly, and yet the struggle is still real; defeat is frustrating, but victory is so sweet. It’s a design that lends well to quick consumption and more casual gameplay than most MOBA titles can manage. Still, if Ranked play is your poison, there are tons of elements to master to get good at Battlerite.

The graphics and audio are fantastic, especially for a now-F2P title. The art style of the characters reminded me of World of Warcraft; that cartoonish, exaggerated animation and bold colors feel familiar and almost classic at this point. You can purchase or unlock cosmetic changes; the Chest system is addictive in that you have a chance of finding a “rare” outfit for weapon for a character. It’s unusual that an F2P game offers so much content that isn’t tucked away behind a paywall, and it adds more incentive to play, and often, in the hopes of more chests. The sound effects are rich and lend well to the immersion — explosions are satisfying loud, and heals sound properly rejuvenating.

You generate in-game currency as you play, which allows you to unlock additional character Champions. As in most titles with a roster, certain characters are available during the free rotation, which allows players to try them before they buy. I was fortunate enough to have the All Champions Pack DLC, which unlocked the entire roster for me from the beginning along with a few other bonuses. Players generate this currency surprisingly fast, so it doesn’t take long to have a wide variety of options concerning who to play. There are also objectives that, when completed, give you bonus loot, such as playing games as four different Melee champions. 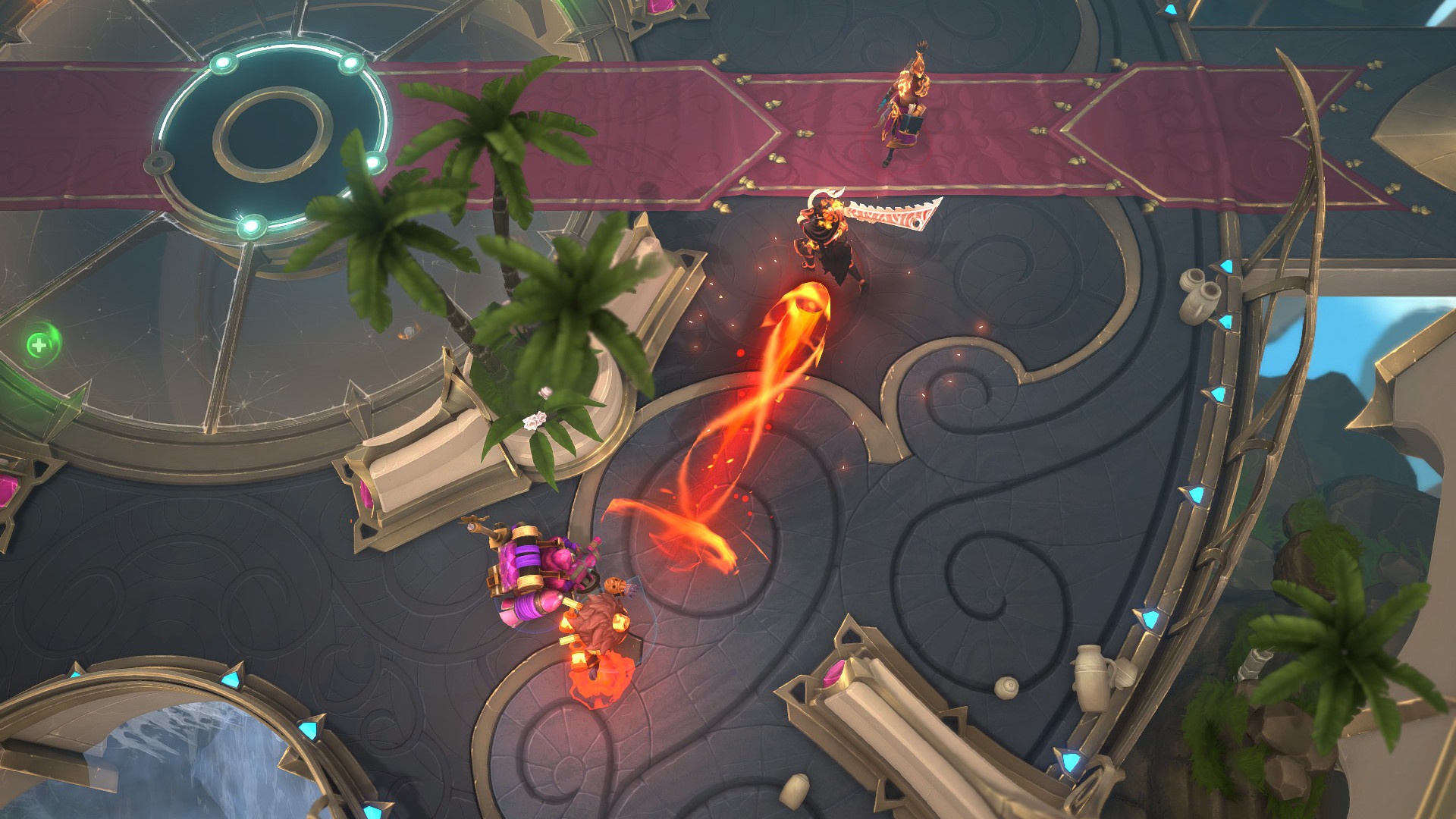 Battlerite is an exceptional title, especially since its F2P model increases its accessibility across the board. The community feels far less toxic than many MOBA environments, especially since the faster missions and chat disable features discourage long ranting sessions during the gameplay. The characters are fun and varied, with fresh styles, and even holiday bonus content; while I missed the Halloween event I love the look of its exclusive costumes enough to anticipate next year. Players level up, both account wise and in each character, adding extra incentives to continue playing beyond just the chaotic, highly tactical combat of any given battle.

I loved the versatility of being able to do both 2v2 and 3v3 battles, and the in-game friends list is easy to use. Additionally, you can configure your templates for character’s moves, duplicating abilities and customizing exactly how you play any given role on the roster. Want more crowd control on Blossom? Configure it! Want more damage on Thorn? You can do that! The ability to customize the experience and your team’s talents lend tremendous potential for continually evolving, changing metas and tactics. And at the bargain price of F2P, there’s no reason at all not to give Battlerite a chance. But be warned: The combat is incredibly addictive, and Blossom might be the cutest character ever.