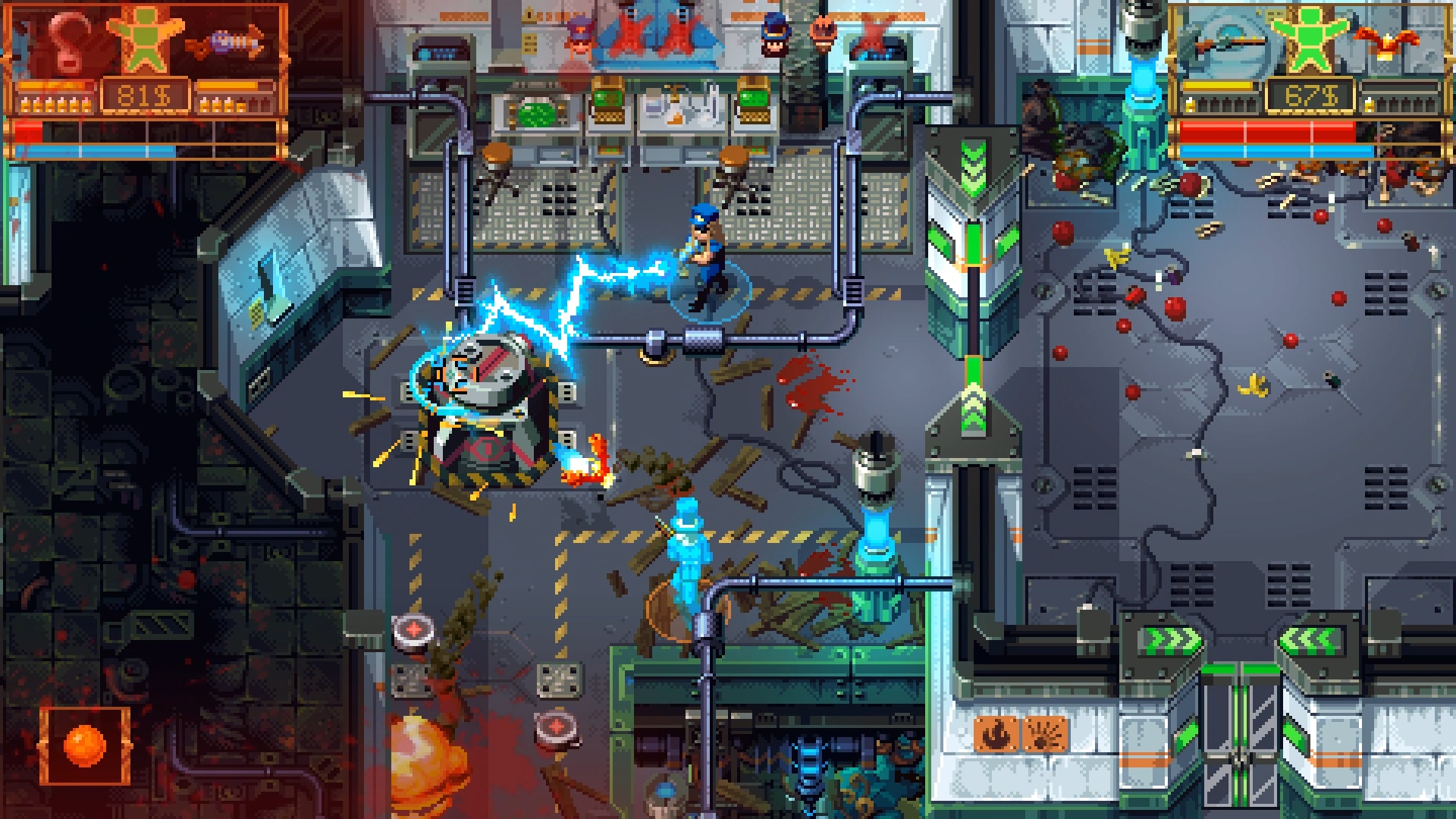 Tower 57 is a Top-Down, Twin-Stick Shooter featuring Pixel Graphics and a Retro theme. With an emphasis on cooperation and a Dystopian, Cyberpunk theme, Tower 57 has a little something for everyone – especially gamers who enjoy the Neo-Retro resurgence of pixelated titles full of nostalgic action. Released on November 16th, 2017, from Pixwerk, Tower 57 raises the bar on what Retro-inspired games should look and feel like, and goes the extra mile to incorporate excellent Co-Op dynamics.

Players find themselves thrust into a futuristic, Dystopian world, where civilization clings to bastions of hope in “megatower” structures. These huge buildings house what’s left of humankind and our protagonists are sent to investigate the strange occurrences surrounding the infamous Tower 57. Gameplay begins by choosing three characters from the roster to serve as your team, doubling as your “lives” as you play; if you die, that character is finished, and you must choose another remaining survivor. There’s variety in the character choices – and both male and female options, which is always a treat. I enjoyed the scientist with her zapping gun and French accent, but the differences in starting equipment and abilities are relatively minimal. Over time, players can learn which weapons they prefer, and choose a starting trio that reflects those preferences. 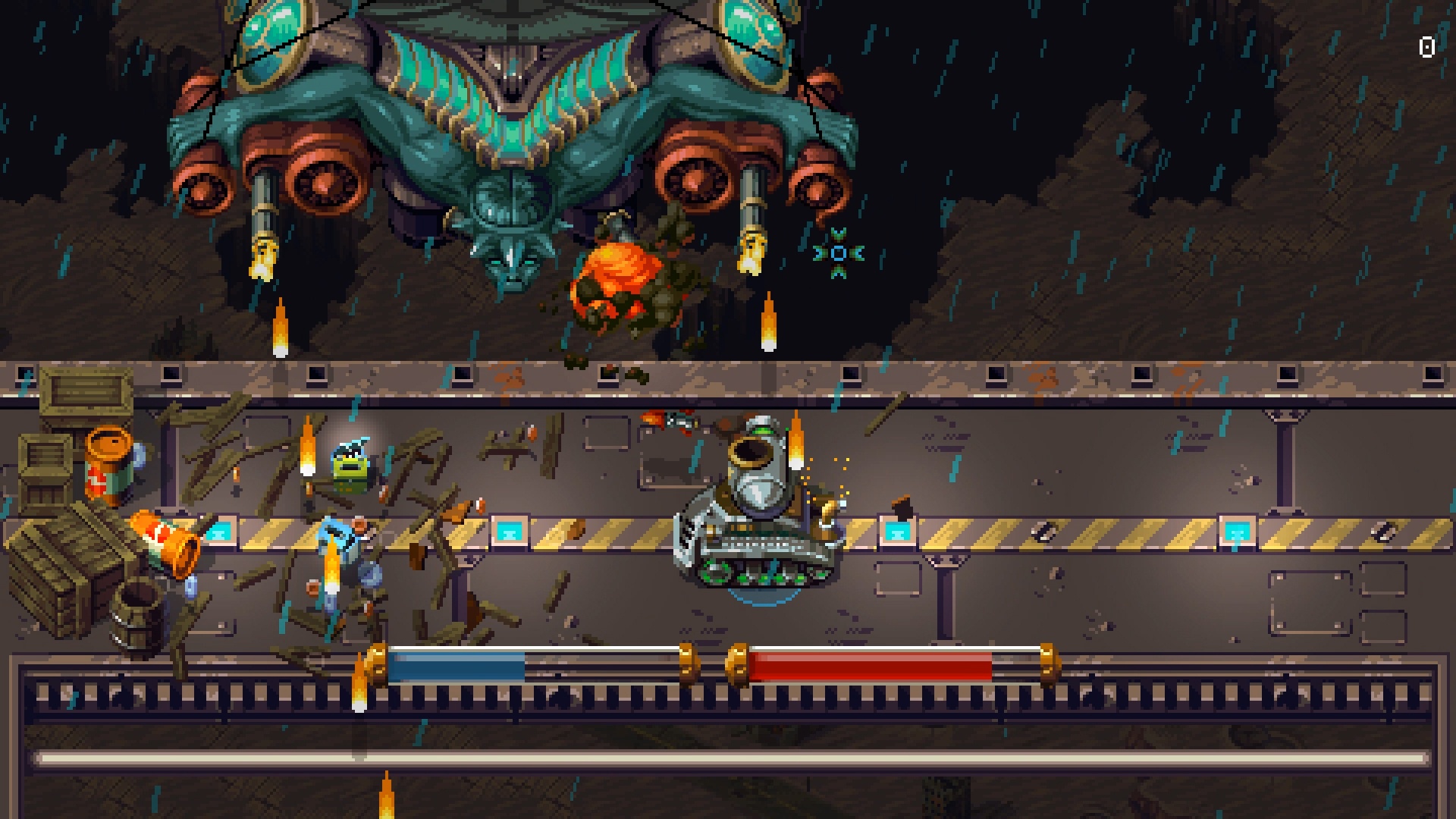 Over time, more and more items drop, and you can customize what your characters have at their disposal. There are power-up stations, where you can upgrade and repair your supplies; enemies drop loot as well, plus there are crates, barrels, and other objects just waiting to explode into a sea of loot. Tower 57 feels heavily inspired by Arcade games of yesteryear, where the Action is very straightforward: kill everything. Mass destruction seems to be the best choice of action typically, and since items are limited, and lives are scarce, it’s a good idea to find as much as you can. Mayhem and chaos set the mode immediately, and Tower 57 feels like a hybrid of a Retro dungeon crawler with some of the best Co-Op action in recent years. The ability to choose between both Local Co-Op and Online Multiplayer was a huge selling point for me; too many tiles offer one or the other, if that, and Tower 57 is greatly enhanced by this dynamic.

There’s a wealth of opponents, and situational hazards, which means thinking on your feet and looking for a weakness to exploit is key to surviving. I was surprised by how fast I was near death, even on Easy mode; health boosts are minimal, and even the ability to purchase a health restoration in one of the dispensers is few and far between. You’ve got to learn to dodge and evade, bringing the right weapon and/or ability to the battle. Having another player by your side definitely helps, but Tower 57 doesn’t hesitate to bring the pain. In the first level, barely out of the tutorial, I stepped into a cutscene which had a creepy monster attacking my character and biting off her legs. Yep, both legs – I had to hobble-walk, leaving a trail of blood, over to a machine to repair my missing limbs.

The artwork is exceptional, even by pixilation standards. It’s evident that this style of design was painstakingly developed, with a fantastic eye for detail despite the Retro-inspired look. The soundtrack is also fitting, modernized beyond what we experienced on the old 8-bit and 16-bit systems but still perfect complement to the Tower 57 world. From the weapon effects to the enemies, Tower 57 is chaos that’s fun to look at, action-packed and incredibly brutal at times. The character models are varied and detailed, and the voice-over dialog from each of the cast members was witty and fun. 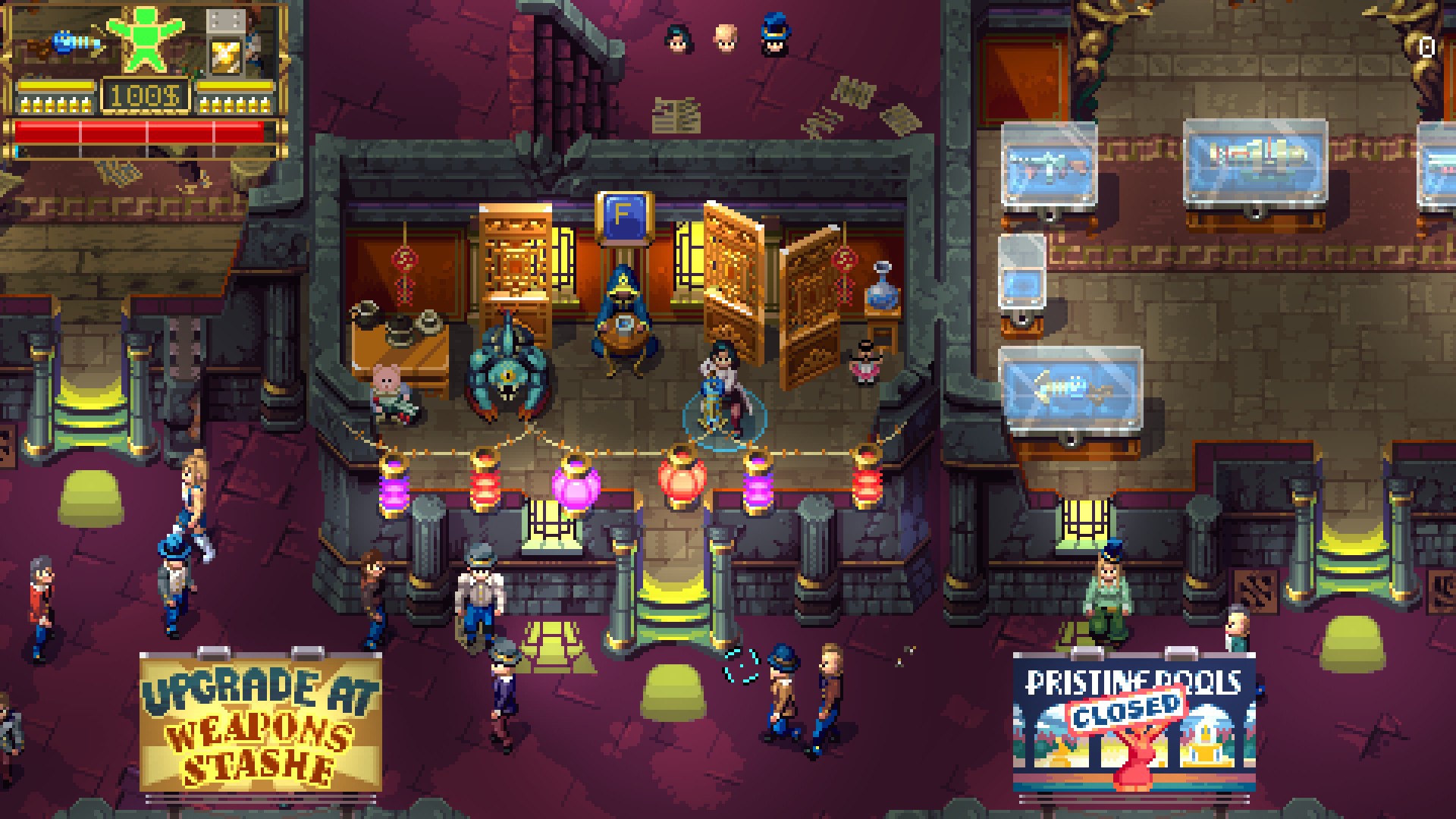 Tower 57 accomplishes what it sets out to do in spades, delivering an incredibly fun Co-Op experience that is ripe with mayhem and destruction. I enjoyed the Cyberpunk storyline, even if the Dystopian theme has been a little oversaturated in recent years. Paired with the Pixel Graphics and the excellent special effects, Tower 57’s design is fantastic. It feels like a love letter to bygone gaming eras, back from the time when friends sat on the same couch and struggled to get past the same brutal, unrelenting Sega game level. At least Tower 57 offers a Save Game feature, unlike older titles, such as Zombies Ate My Neighbors, which it absolutely reminds me of.

My one complaint is that Tower 57 is a relatively short title, especially if you’re playing it on Easy and/or with a friend. It only takes a few hours to beat it, though the frenzy of the experience lends well to replay value. At certain points, it’s impossible to backtrack, which means exploring each level entirely can be a challenge. But this is a title that was obviously designed to be fast, dirty chaos and explosions, and it certainly succeeds at that. If you’re looking for a fun, nostalgic piece of Pixel Graphic action, Tower 57 is especially fun with a friend. But the shorter duration and lack of true innovation might mean it’s better for most players during a sale.