What do you get if you cross an octopus with a submarine? Nope, not an Octosub, but an Octocopter! That’s what. Well, at least you do in Tacs Games’ new title for the Nintendo Switch: Octocopter: Double or Squids. Don’t be fooled by the title, it’s not a direct sequel to the developers’ 2016 title on the Wii U, Octocopter: Super Sub Squid Escape, but a direct port of the same game; albeit with a few new additions that take advantage of the Switch’s extra abilities. It’s also got nothing to do with Splatoon either, so don’t go thinking that it is someway related to the flying Octarian fighters that possess the same name. You’ll be sorely mistaken! So, what is it that makes this reincarnation so very different from its last outing, I hear you say? Sorry, you didn’t? Oh well, I’ll tell you anyway, but first let’s get a gist for what this game is all about.

Hell-bent on each other’s destruction, the octopus and submarine have been embroiled in an epic battle that ends up with the sea-faring creature clinging onto the hull of the sub; forcing them to sink towards a depth of twenty-thousand leagues under the sea. Exhausted from their freefall to the bottom of the ocean, both mollusc and machine need to work together in order to find a way back to the surface and find freedom from an inevitable, watery grave. However, with the Octopus clinging so tightly, the submarine’s capabilities of moving in a straight line has been severely compromised, sending them both in a dizzying spiral that sees the two of them, constantly spinning out of control. It’s a simple premise to the story and a mechanic that sees the main staple of Octocopter’s core gameplay.

Set over a series of underwater worlds, each one segmented into multiple stages and end-of-level boss fights, the unlikely pair need to navigate their way through a series of ravines that contain a variety of dangers for the dastardly duo. Although rather linear in its design, especially for the first few levels, its progression, later on, provides a suitable challenge as the ravines spiral around themselves and tight corridors offer a lack of breathing space; a task made all the more difficult with the physics of the moving sub and octopus that constantly spin. The challenge in this game isn’t so much in its difficulty, but in its ability to traverse the environments with a skilful element of timing and patience. Equipped with three hearts, careening into a wall, rock formation, mine or undersea inhabitant, sees you lose one of your precious lives; lose all three and its back to the start, or to the nearest checkpoint should you pass over one. 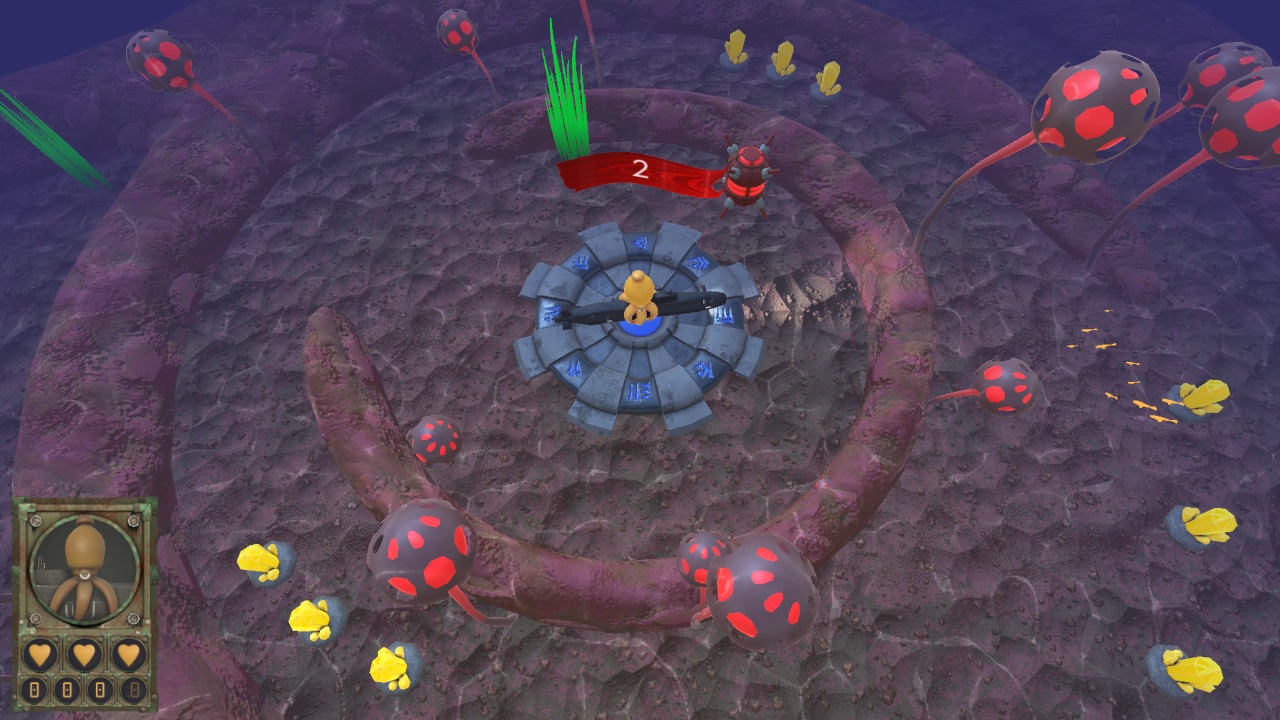 Each of the obstacles that are presented in your way, requires a certain amount of dexterity in order to pass through the small window of opportunity that they allow with the physical movement of the sub and octopus and their tight angles. However, there are a number of elements that can help you on your journey. Rubber buoys can change the direction of your spin, something particularly useful when trying to navigate through a curvature and torpedoes can be fired from the submarine’s bow. These can be used to good effect in destroying enemies, mines or rock formations that block your path. Although spiralling out of control, you also have some abilities which help to bolster the movements of your hapless duo. Pressing the A button allows you to speed up your movement, Pressing B causes your spin to accelerate and X fires your forward armaments. These all help to gain a more precise control over your movements, offering a more accurate means of traversing through the more difficult sections of each level.

After completing the path in your current segments of ocean floor, a gratuitous boss-battle gleefully awaits your arrival. Ranging from Narwhals to Stingrays, these underwater beasts require a few shots in certain, highlighted, spots to ensure your victory. Housed within an arena of sorts, these battles usually involve rotating around the area, lining up your shots to hit the desired area and avoiding various attack patterns from tentacles to horned spikes. These sections of gameplay offer a nice reprieve from the intricate travelling from the ravines. There’s nothing too challenging here, however, they do provide a lot of fun in their execution.

So, with the gameplay elements of Octocopter firmly laid out, what makes this title so different from the Wii U version? Well, Double or Squids has had a complete overhaul in its presentation that boasts a new soundtrack, extra animations, improved controlling, better camera angles and functionality, a whole new tutorial, improved graphical textures and a host of extra medals that can be awarded through skilful play. These all add to produce a more enhanced experience from its previous iteration. However, the biggest addition is the game’s ability to support local multiplayer for up to four people. Using a combination of joy-cons and pro controller setups, you and your friends can now play together via a four-way split screen which adds a further element to the gameplay. Although still containing the basic premise of the single-player experience, this new feature now incorporates a more, racing mechanic as each of you battle to pick up the most squid that line each course. This creates a sense of more urgency to the proceedings and offers a fun multiplayer experience. 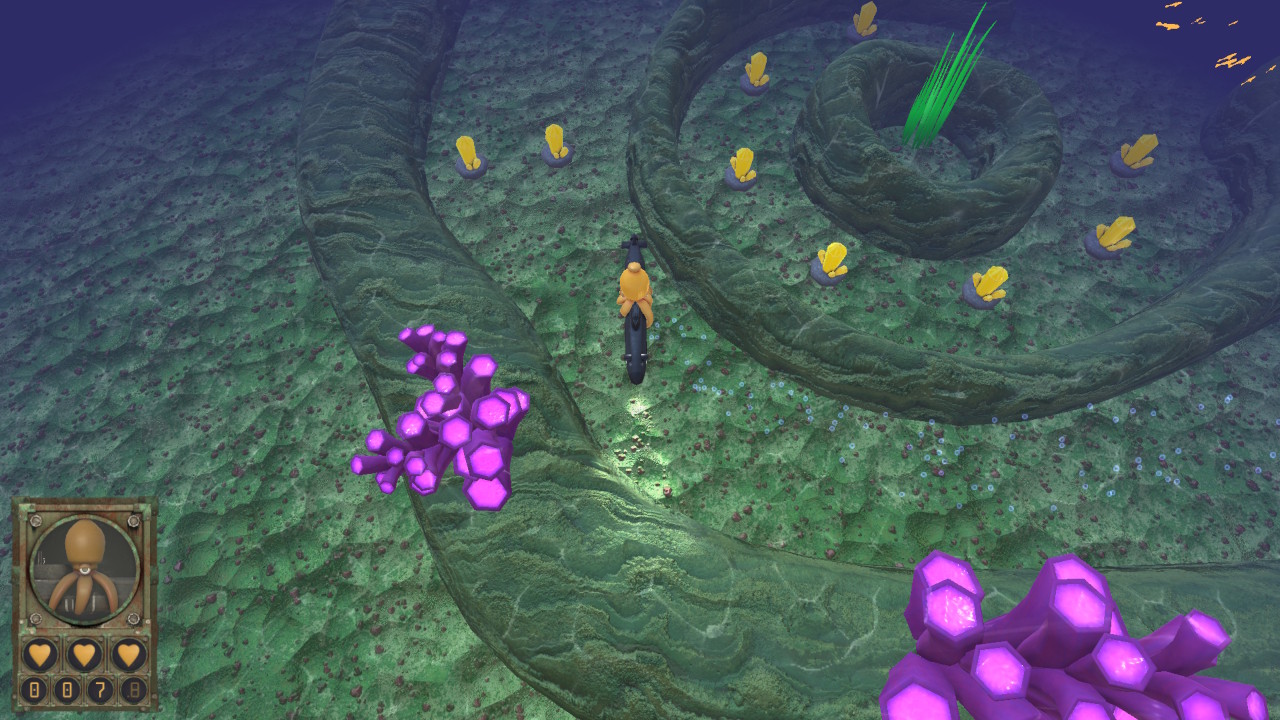 The whole presentation of the game is expertly done, with an aesthetic that is pleasing in both its visual and audio qualities. Although viewed from a top-down perspective, Octocopter contains a plethora of 3D graphics and intricate detailing that adds a superb layer of detailing to the underwater settings of the game. Reflected ripples, glimmering rocks formations, passing schools of fish and floating jellyfish all produce a sparkling look that gives the game a feel of something much, more expansive and closer to the feel of a triple-A title. The sound effects are adequate, nothing explosive, apart from impacting torpedoes, and the musical score suits the environments well with a tone of mystery that doesn’t get annoying or repetitive in any way.

Overall, Octocopter: Double or Squids provides an experience that is both fun to play and challenging. With its pocket-money pricing, pleasing aesthetics and multiplayer functions, the game provides a very good level of value for your pennies. However, although set within the depths of the ocean, there isn’t a massive amount of depth to the game, but it is also far from being a shallow experience. I found that this is a game that is more about perseverance and patience, as it takes a while for all of its mechanics to click into place. However, once you do get a feel for it, the game opens up to provide a worthwhile addition to your Switch’s library.