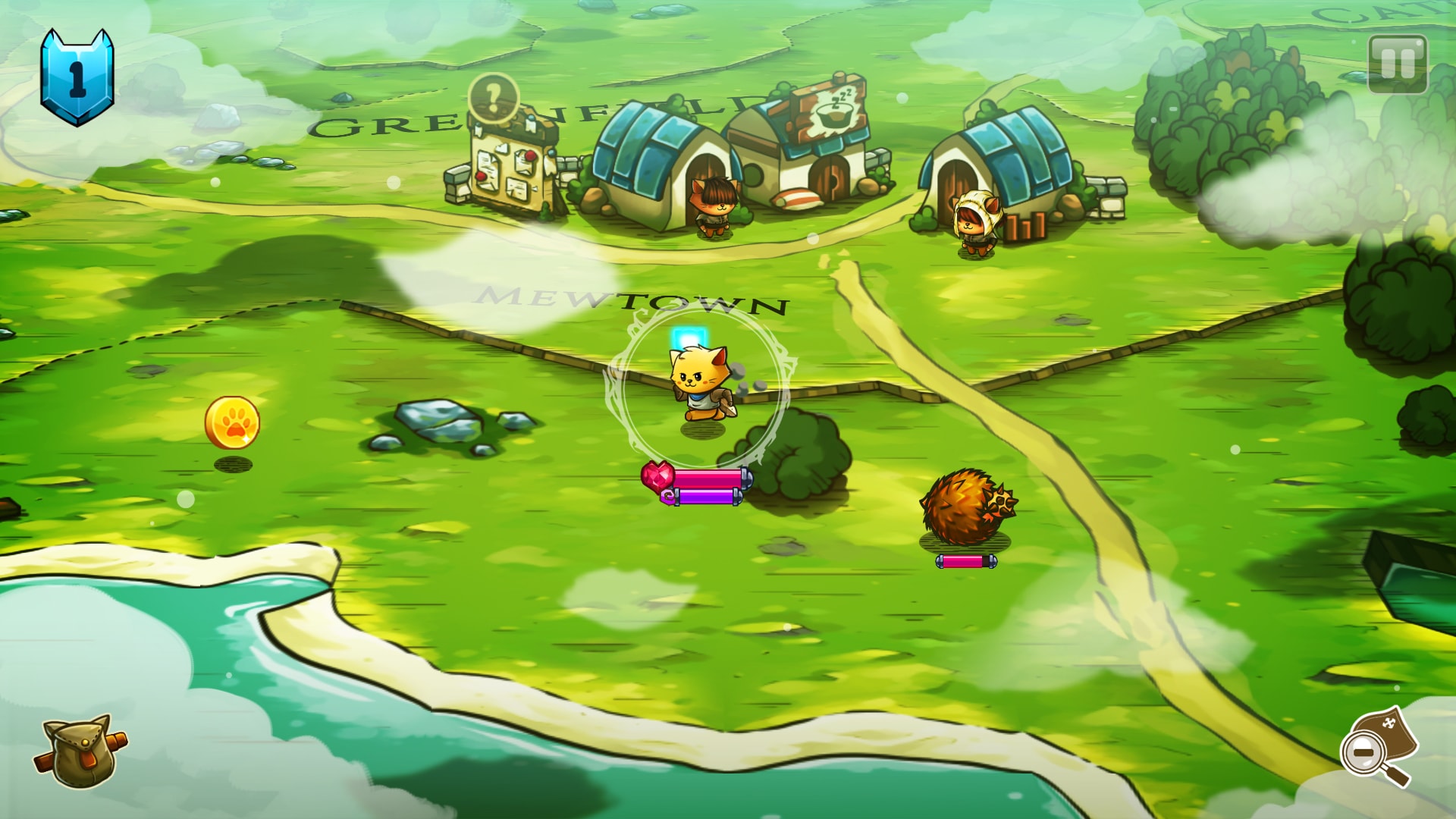 In Cat Quest you take control of a plucky young cat on a quest to save his sister from an evil white cat with incredible power. During your journey you’ll help cat peasants, explore various locations, delve into the depths of dungeons, and use your Dragonblood powers to slay dragons and save the kingdom–all in the pursuit of your dear sibling.

Cat Quest doesn’t bring anything new to the table as far as action RPGs go, but what it does it does well enough. Your hero is a silent protagonist lead by a fairy of sorts. The kingdom is under siege by dragons and it turns out you are one of the few born with special powers–the “Dragonblood”–who can stop them. Your enemy is an evil magician with seemingly infinite power who snatches your sister for no reason. These plot points and more will rear their head over the course of your journey.

The writing is one of Cat Quest’s strengths. It’s frequent usage of Cat puns can get a little grating, but there’s plenty of more organic humour in the situations presented; the game doesn’t take itself too seriously, breaking the fourth wall at times and alluding to other games that have done the exact same thing it’s currently doing.

The world is an open map and you can enter buildings like shops and dungeons, but towns are a collection of buildings where you can cat nap to save your game and regenerate your health and mana by pressing triangle. 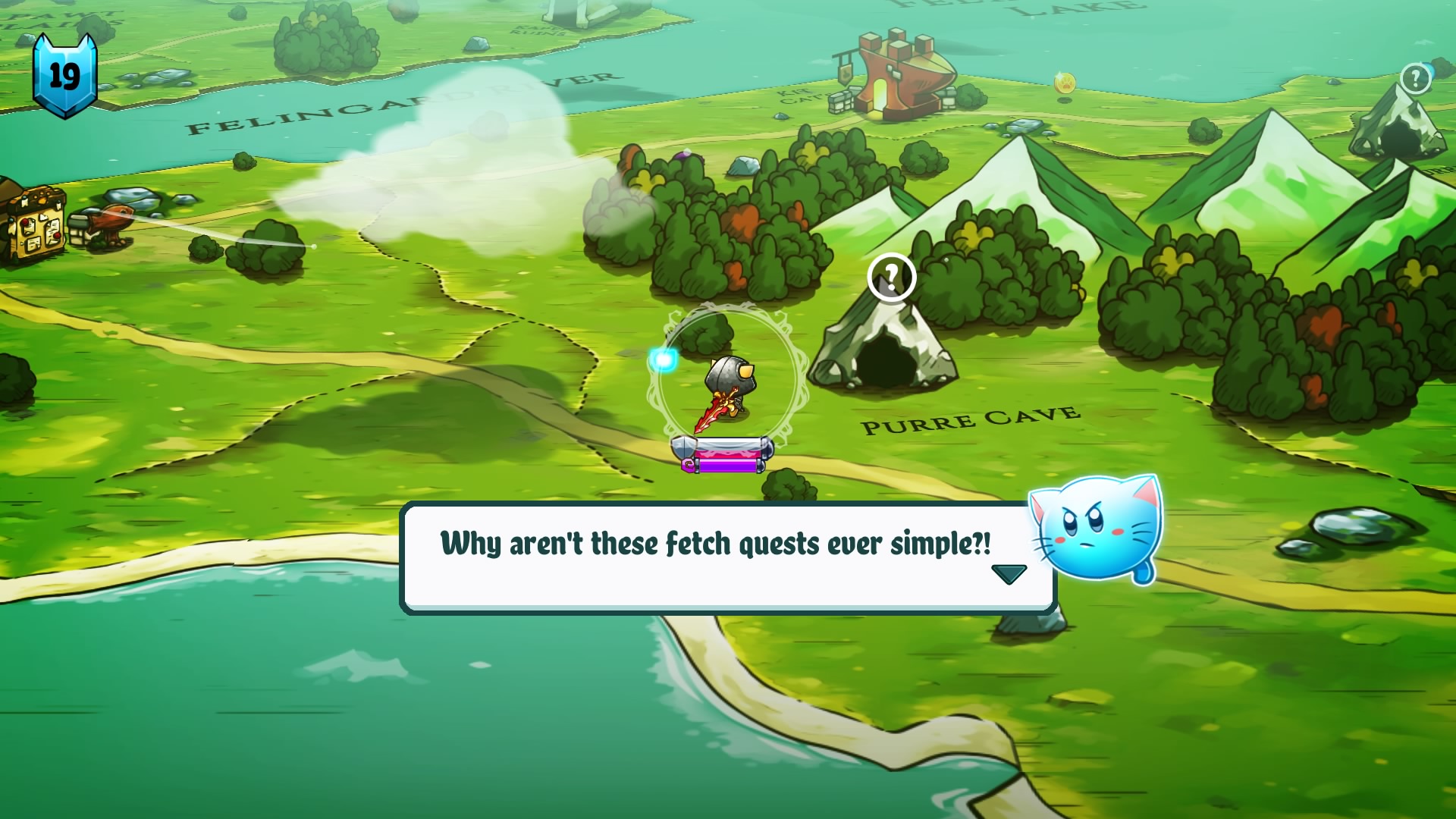 There are only two types of shops, so to speak: blacksmiths and mage temples. The former allows you to buy a chest and randomly roll a piece of equipment. The latter allows you to purchase new spells and upgrade ones you’ve already learned.

Dungeons are simplistic in nature, typically consisting of a single floor containing enemies, treasure chests, and, on occasion, traps. You can leave at any time, though for quests you’ll be required to slaughter all of the monsters found within in order to complete your objective. Yes, that means even if you’re there to fetch an item, you’ll be required to fight your way through it.

Combat utilizes melee, dodging, and spells. Enemy attacks are indicated in red and every enemy has its own attack speed and pattern for you to avoid and counter. You’ll need to be fast on your feet because there’s no option to block, though heavier armor provides you with a small buffer shield. Dragon fights, limited in number though they are, are the most interesting part of the game as they are large and capable of taking more damage than your average grunt.

The quest system is also very simple. You can pick up requests from boards posted in towns and outposts. Quest objectives consist of either: fetching an object after destroying monsters, going to an indicated spot on the map (usually to destroy monsters), or clearing out a dungeon. I’m sure you see the trend here. After you’ve completed your objective, you’re rewarded with experience and gold. Like dungeons, quests are assigned a recommended level so you’ll know exactly what you’re getting yourself into as far as enemy strength before you embark.

You can find equipment in chests, buy it from the Kit Cat the blacksmith, and receive it as quest rewards. Equipment includes a weapon, armour, and headgear–each of which actually alters the appearance of your hero cat. You can mix and match pieces, but full sets of armor tend to lean you towards one particular strength–i.e. magic damage at the expense of attack damage. 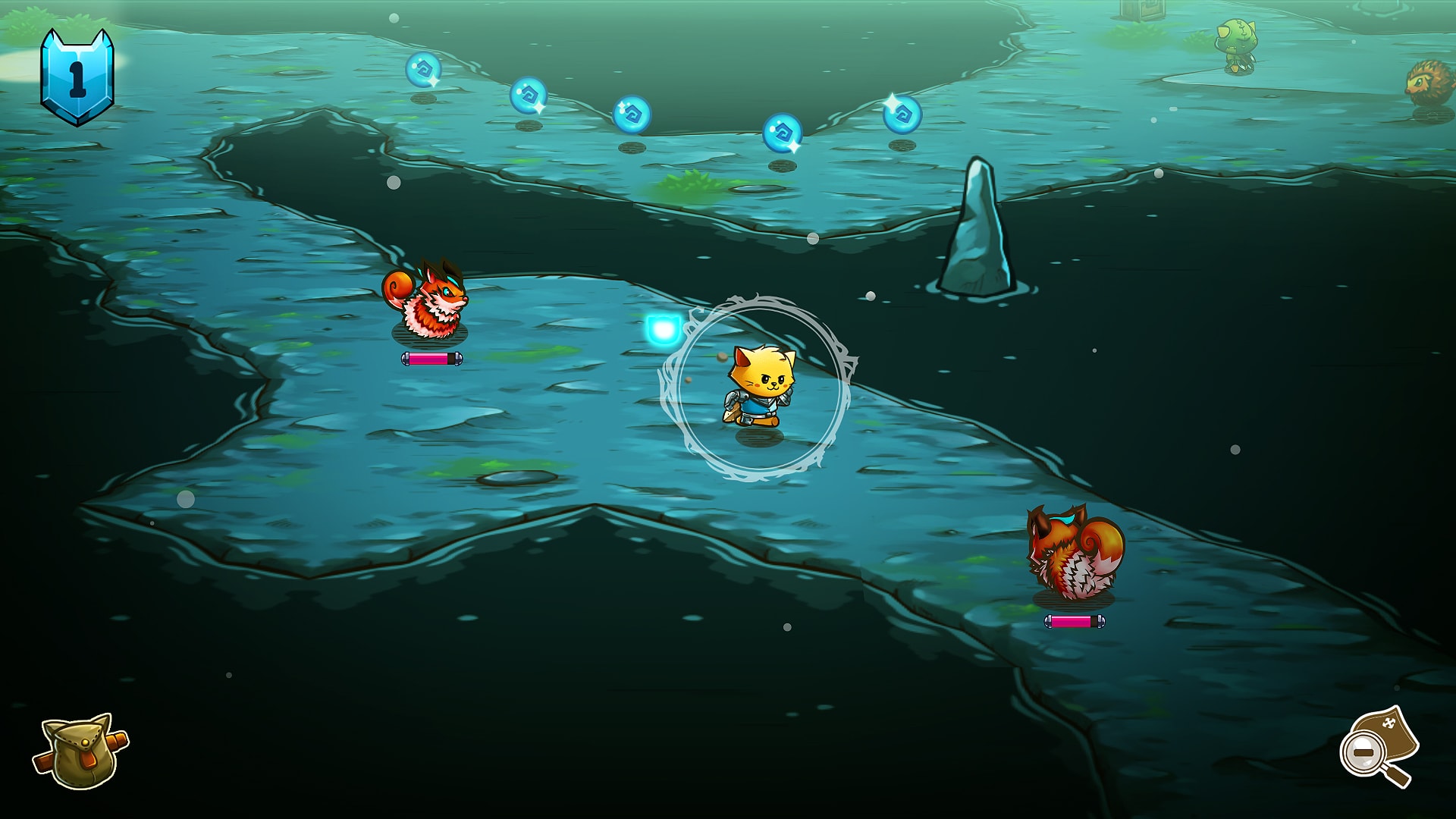 There is a finite amount of equipment types, so picking up doubles will raise the level of the equipment you already own. Dungeons typically yield better equipment than any that can be bought, though Kit Cat does offer a 5000 gold chest that allows you to access fancier options.

.Bottom Line.
Cat Quest is a competent, simplified version of an adventure RPG. While it won’t break any conventions or the genre, it will provide a few hours of entertainment. It’s cute, charming, and a little bit repetitive, but this adventure has heart.