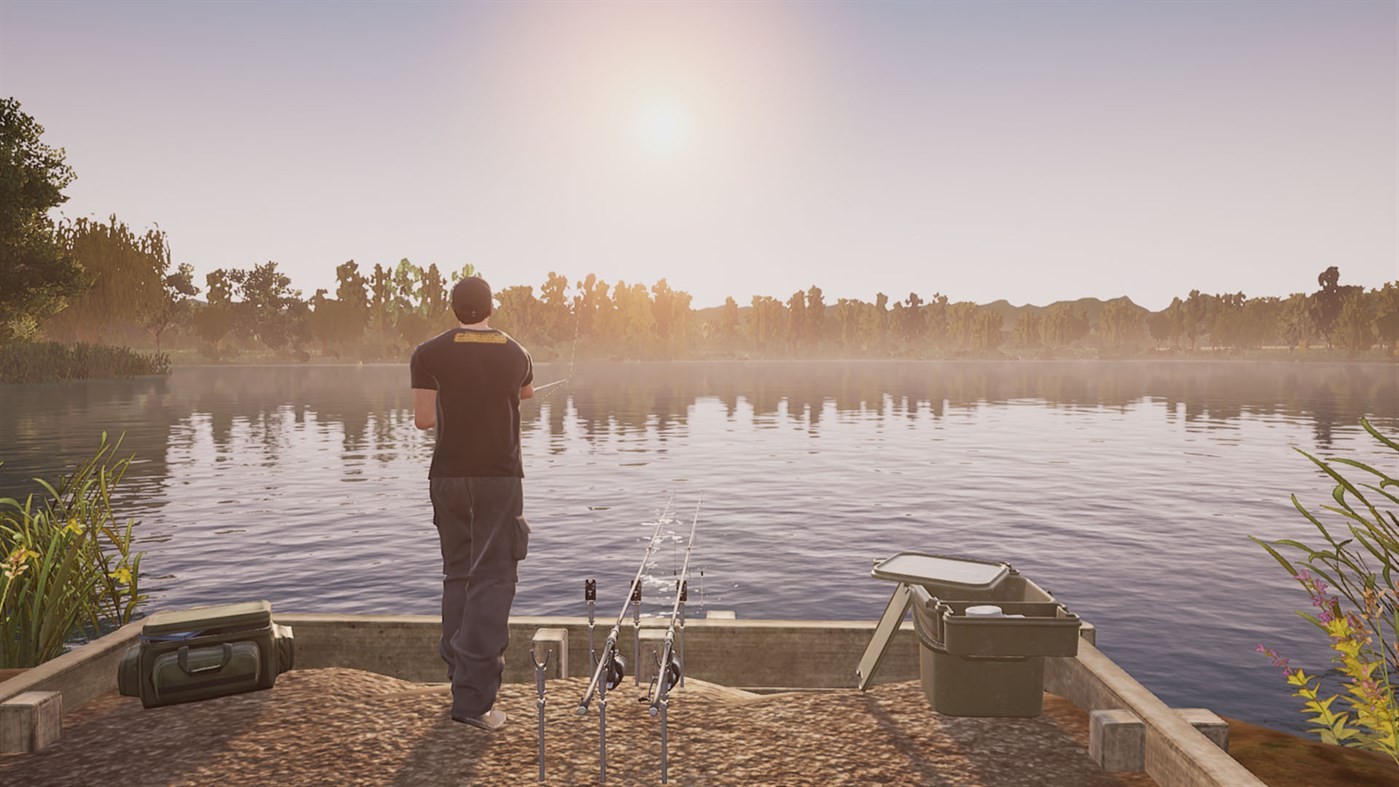 As a young lad, I had the misfortune of being dragged out on a cold and wet Sunday morning to go and “enjoy” everything that fishing had to offer. The sun rising across the water, your line arcing beautifully into a crystal blue ocean, the thrill as the fish took the bait and the ability to amaze your friends with stories of the classic ‘I caught one this big’ moment. I’ll be honest, it was more of a lukewarm tea out of a thermos and a soggy sandwich sort of experience. I never did have the patience to sit still for hours, I also didn’t catch anything, I believe the fish were as interested in me as I was in them. With this in mind, I was really on the fence when I saw Fishing Sim World: Pro Tour on Xbox One. Surely, from the comfort of my own sofa this would be a much better, more comfortable, and therefore more enjoyable endeavour? It was a make or break moment for me in the world of angling; I decided to install it, chuck on my waders, and see if I could hook me a monster bass or two.

Fishing Sim World: Pro Tour is developed by self proclaimed authentic game simulation creators Dovetail Games. With a long list of fishing and transport simulation titles under their belts, it would be fair to say they should have the experience to create a realistic and exciting game for everyone to enjoy. I started out with reasonably high hopes, did the developers deliver on their promise, or was this another one that you’d be glad that you let slip you by? Having previously broken my simulated fishing cherry on Sega Bass Fishing on the Dreamcast, I was hopeful that this would have the same challenge and fun mix presented throughout each outing.

I’m going to be brutally honest from the start, the first 2 to 3 hours of this were very, very hard work. From the extremely long loading times, to the what felt like endless video tutorials, it started to be a chore before I even got to grab a rod. I decided that the best way to play the game was to throw myself in at the deep end, sink or swim. I skipped the quick play, and the practise and dived into the rather in-depth career mode. With 3 game classes to choose from; Bass, Carp, or Predator, you are treated to a variety of play styles which will no doubt extend the longevity for the keen fisherman. I chose Bass, no particular reason other than it was the first option, went to the first tournament of the amateur season and was unable to catch a fish. I was hopeless, I had no idea what I was doing, so a friendly bit of advice: I watched the tutorials with my children talking throughout, ensure you have no distractions otherwise your fishing haul will be like mine, very slim indeed. Once the basics were understood, and with a small amount of luck on my side, I was able to start catching fish. From the first fish caught, pardon the pun, I was hooked. Partly because of the desire to catch bigger prey, but also the UI shows you a constantly updating leaderboard in the top right corner. This instantly triggered my competitive edge, for every fish you landed the AI players would land bigger and better ones. 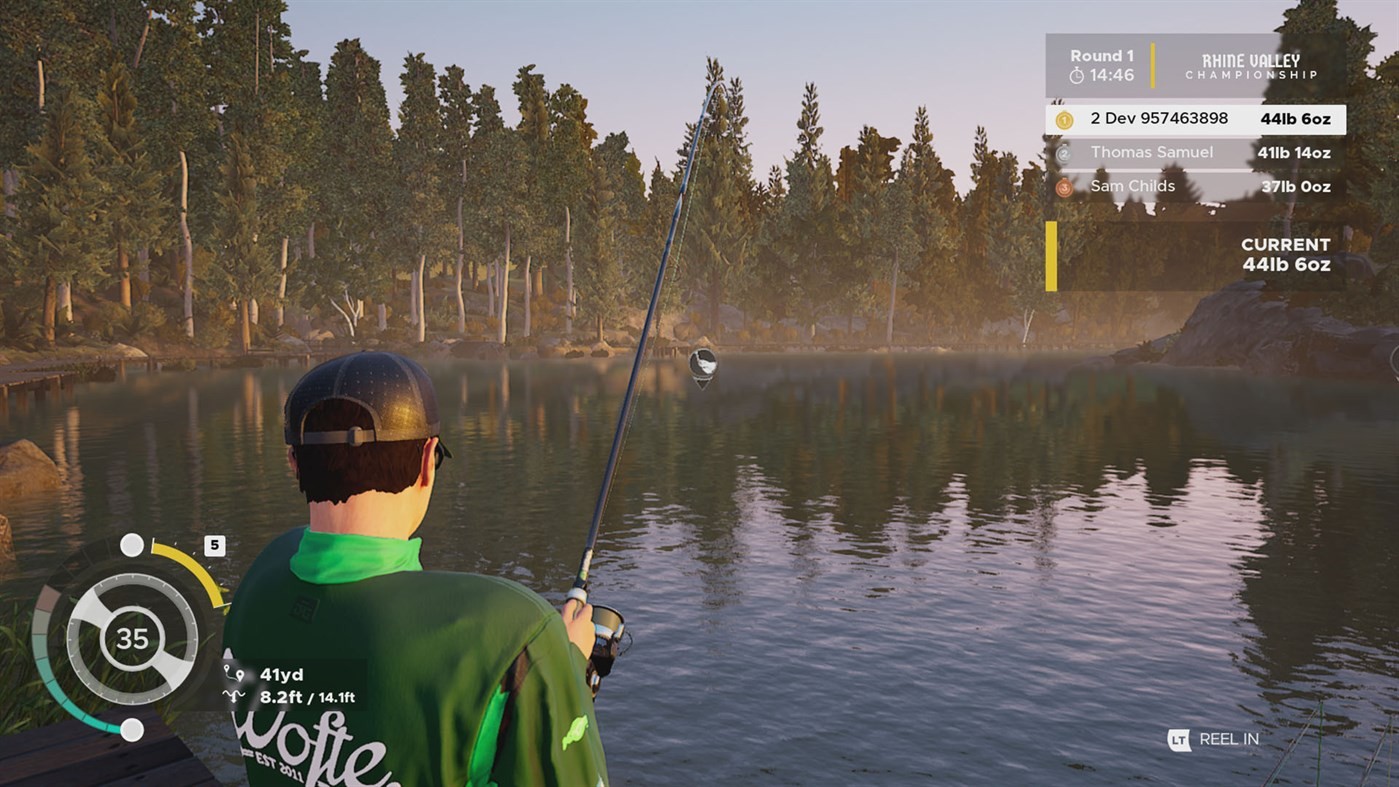 As already stated, play styles are broken down into three categories that can be selected in any season, the difficulty is broken down into a further 3 levels; Amateur, Pro, and Elite. With each of these, the requirements to win a stage or a tournament changes. In my experience the challenge didn’t really change, just the amount of stages you had to participate in increased. After roughly 4 to 5 hours of play time, and a fair bit of trial and error to perfect my techniques, I experienced little to no challenge from my competitors, winning was unfortunately almost a certainty. This really took a lot of the enjoyment away from me. If I had been playing the game for months, or was some sort of fishing guru, I’d expect to be this good, but after such a short period of time I really wanted to still be considered an underdog.

If you are a fan of being able to customise your player, or enjoy purchasing lots of unnecessary items with in-game credit, whilst being able cover your clothing with big brand sponsorship, then this will certainly be the title for you. With numerous character designs to select from, you will certainly find the look that you desire. All these cosmetic elements have no impact on the game, however the various choices in additional equipment for your tackle box will help you to cast further, fish deeper, and ultimately land the trophy catch of your dreams. Credit is earned by competing in tournaments. Separately, you can also earn money through sponsorship and prizes, though I’m yet to work out how you spend this, I think it merely reflects the success of your career, albeit on a very shallow level.

The developers have done well to utilise real world fishing locations, this adds to the realistic nature of the simulation, and any keen anglers will be able to search out their favourite spots to spend hours waiting for that elusive bite. With realism the goal, you’d expect the graphics to be crisp and modern, unfortunately the character models really do feel dated. However, the animations and cinematic elements are nice, and movement through the water is smooth. The earthy colours compliment the theme perfectly. The environment looks nice at a distance, unfortunately, when you do venture closer the dated graphics rear their ugly head again. I wasn’t expecting AAA rated graphics, after all, the game is currently free on Gamepass, and if you were to own it outright it’s not going to break the bank. I was just hoping for a more polished finish. 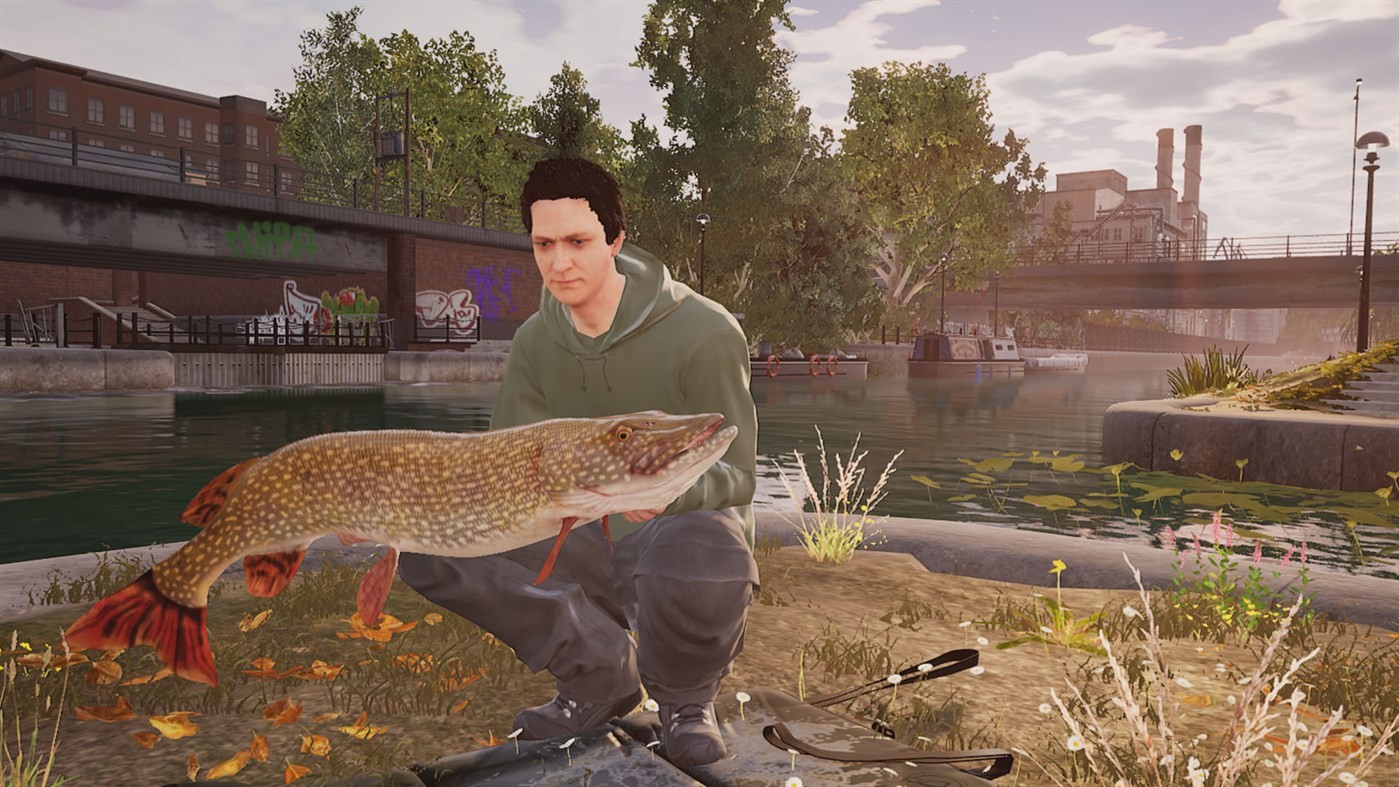 With almost no music to talk about, oddly one of the games strong points is its audio. The gentle sound of fish splashing in the water was extremely relaxing, and between the battle of man versus beast, it was nice to be able to sit back and hear the soft sounds of nature. Occasionally the delightful ambience was interrupted with a glitch which ensured the fishing reel sound continued to play. Extremely irritating, especially if it happened at the beginning of a 20 minute round.

For a game that is so heavily dependent on your understanding of the fundamentals of the sport, its control system is brilliantly simple. The use of the analog sticks, to control the rod and the line made it a joy to play, of course that was once you understood what you were doing. You will become frustrated while learning, I lost so many catches in the beginning that it really did test my resolve. Having never caught a fish in real life, it’s hard to say whether Dovetail Games have got the balance right, but the level of success versus failure felt about right to me.

I’ve pretty much touched upon all the negatives that I encountered when playing, the biggest one for me was the loading times; in this day and age there really isn’t an excuse for a game to take as long as this one did just to get to the main menu. I know fishing is about patience, but this really did push the envelope. With the slightly dated graphics, and the tough learning curve, it will undoubtedly put a number of potential players off. For me, it wasn’t a massive issue, not every game can be a masterpiece and it certainly didn’t impact on how it played.

The developers have done a great job in creating an enormous amount of things to do. There is so much for the player to come back to, so much so that I believe you could play this for a considerable amount of time and still not be able to complete it. Now I’m not saying that all of it would be interesting, as I feel a number of the elements are quite the grind and repetitive in nature. If you are keen on fishing, I think that you will love this, if like me, you are on the fence, I’d suggest giving it a go, you might be pleasantly surprised. I believe that by taking themselves so seriously, they have missed some of the fun elements that Sega Bass Fishing had in abundance, and because of this I think they will lose out on the casual gamer who otherwise may have wanted to give it a try.

A realistic fishing simulator that will not be to everyone’s taste. A tough learning curve ensures you must be prepared to lose a number of catches before you bag that trophy fish.