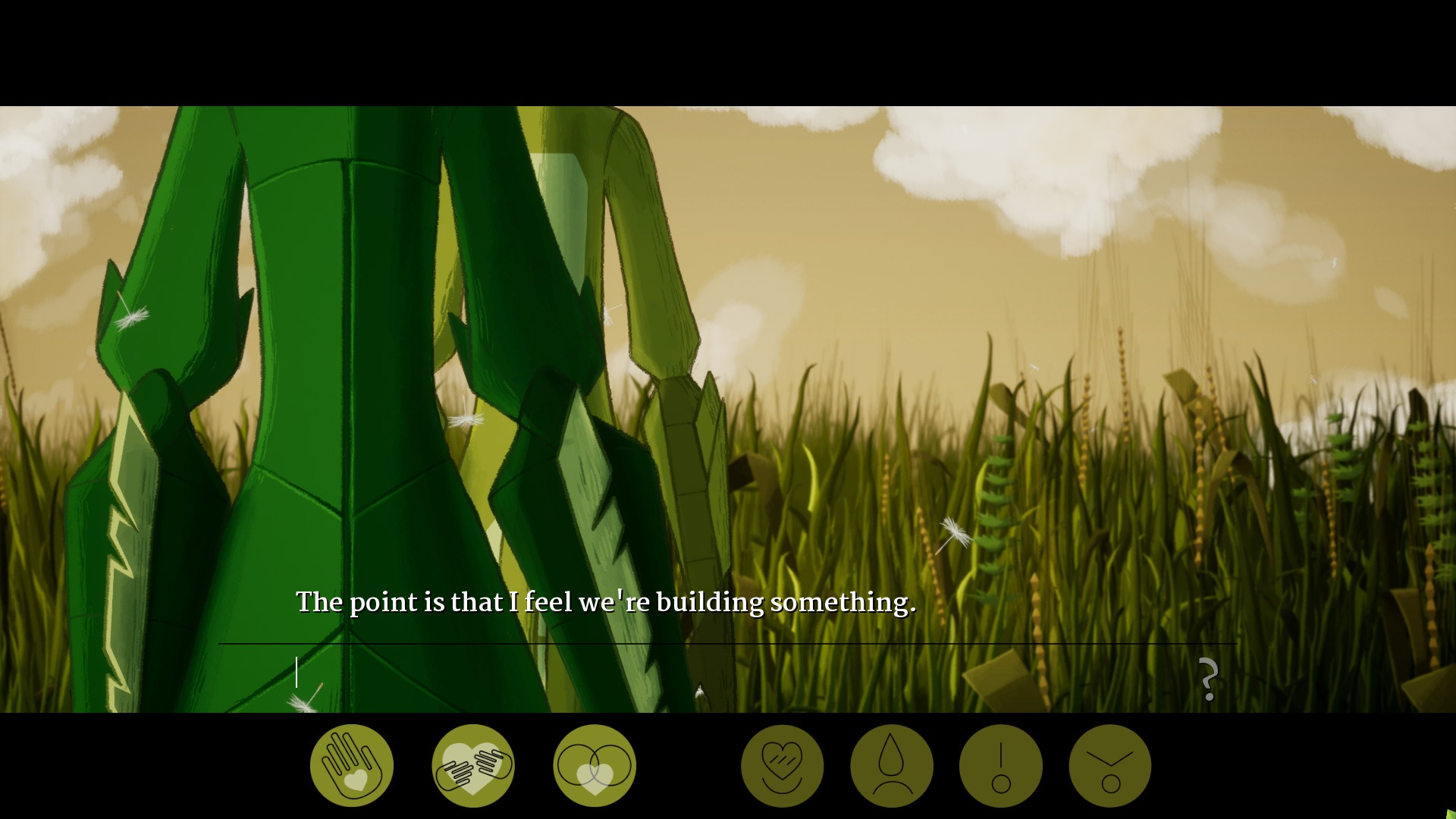 Don’t Make Love is a Simulation title that dips into the realm of Dating Sim by having players step into the shoes of either a male or a female praying mantis. Done in a style reminiscent of Visual Novels, Don’t Make Love uses text-based interaction to tell a story of lust, instinct, and survival. Released on October 26th, 2017, by Maggese, Don’t Make Love has a novel approach to the magic of romance.

The game begins by players choosing the gender of their character, who they will be speaking for throughout the journey. Using what appears to be keyword recognition and an open input for text, players can say anything and everything they want I their potential mate — or default to emoting, using one of three gestures or one of the emojis. It’s hilarious at times but frustrating at others; it seemed to be much easier to anger my partner mantis than to get any closer to some nookie, but maybe that’s just art imitating life? The conversation often delves into some really deep topics – life, death. Love and lust. Survival. There are few light-hearted moments given the severity of the issue at hand. 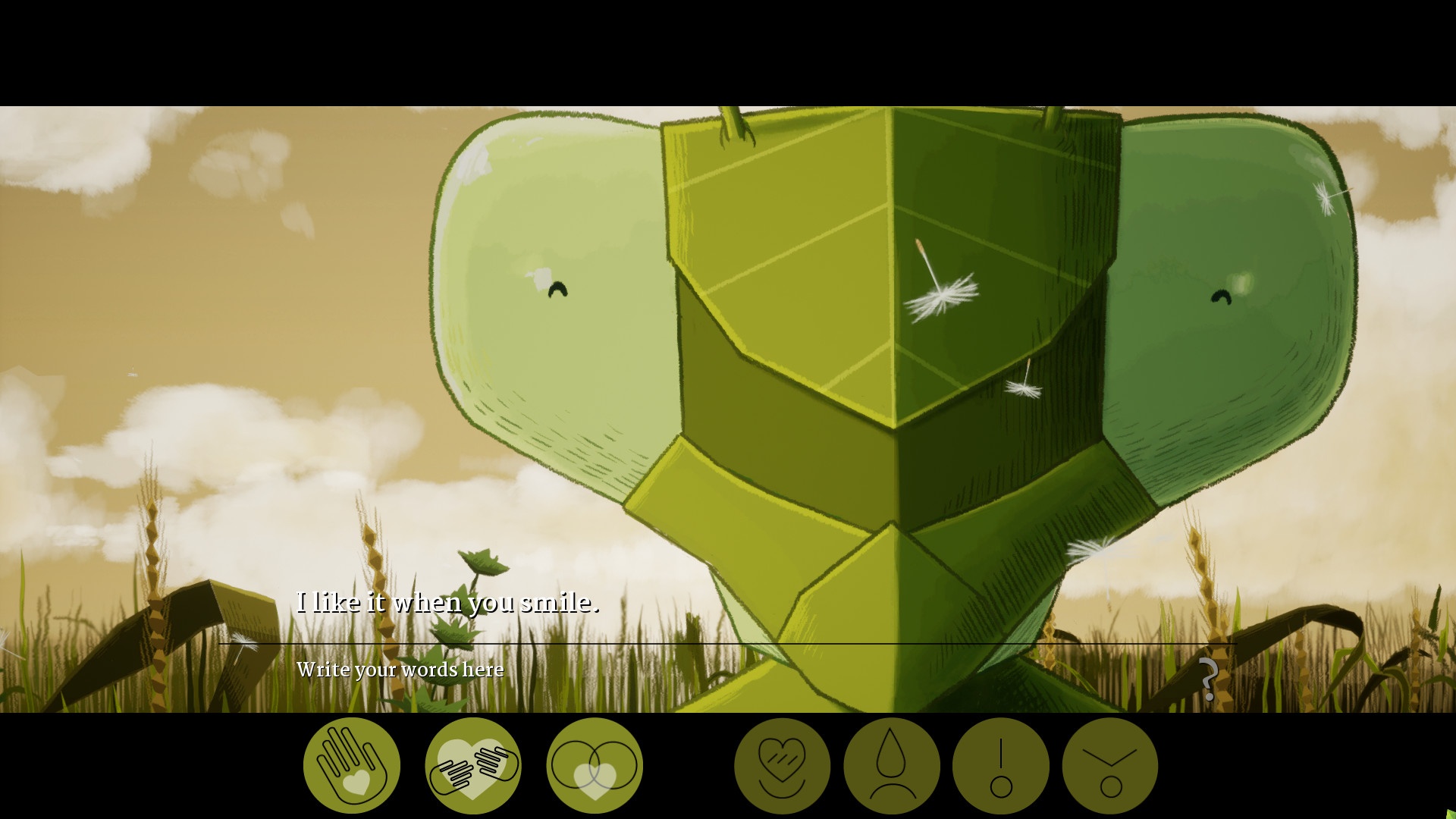 The ability somewhat Choose Your Own Adventure made for some fun interaction with the NPC mantis, but unfortunately, that novelty wore off fairly quickly. I got dumped the first two times I tried to convince the NPC male mantis to “do it,” and the third time he wanted to just stay friends. Finally, after a surprising amount of time and effort, I was finally able to convince him to take a gamble on love. But then the interaction basically faded to black, leaving me oblivious to what happened next. Did he survive? Did she eat him? I can understand leaving something to the imagination, but after all of that conversation and wooing, I felt left holding the bag on that one. It was wholly unsatisfying after the experience — even a little more specific interaction would have gone a long way.

The art style is simple but attractive in Don’t Make Love, with minimal animations and special effects. True to Visual Novel style, this title has different viewpoints and perspectives across a handful of stationary scenes. The actions, like the kiss, are animated, but for the most part, Don’t Make Love’s action takes place as text dialog. The soundtrack is soothing and well suited to the art and play style. The interface is minimal and crisp. There is no inventory to speak of. 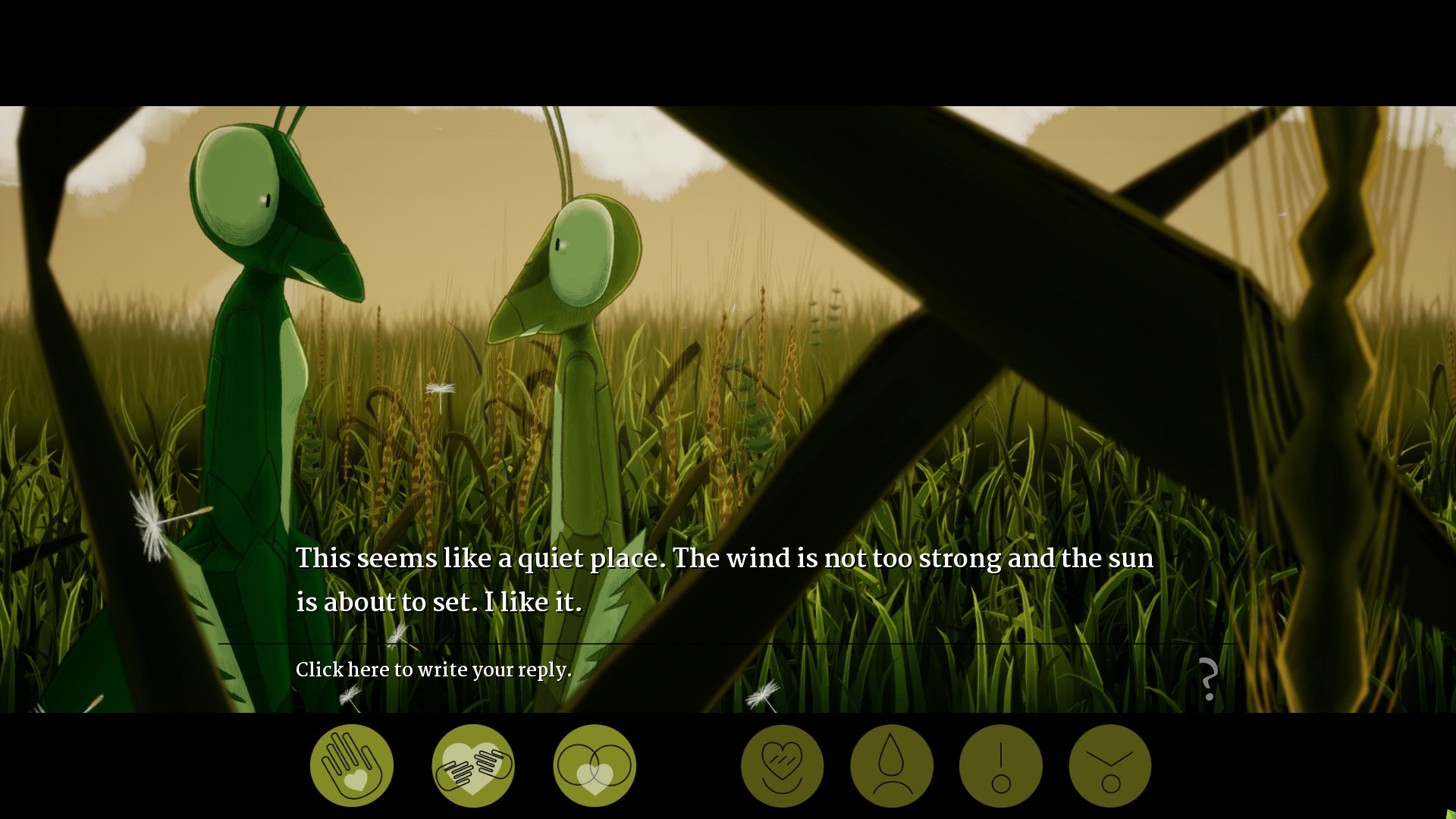 Don’t Make Love is a lofty endeavor in which players explore what it could be like to be a praying mantis “in love.” The ability to choose between being a male or a female character was a nice touch and lends some extra replay value. The implementation of achievements also added to the gameplay, but ultimately, Don’t Make Love is probably one to be played once or twice unless you’re hunting for different endings.

I enjoyed the dialog style and artwork, but the novelty wore off after the first hour or two of gameplay. Aside from achievement hunting or dogged determination to see all the endings, Don’t Make Love doesn’t have a lot to offer in terms of replay value. I found the endings lackluster and even outright disappointing; it felt like a tremendous amount of work and pleading to get a vague, abrupt solution. I’d have preferred a more concrete outcome, and often, the process felt intentionally difficult for the sake of prolonging the experience. I feel that Don’t Make Love is a cool take on traditional Dating Sims, but the amount of content and the price point make me have to recommend this one only on sale.