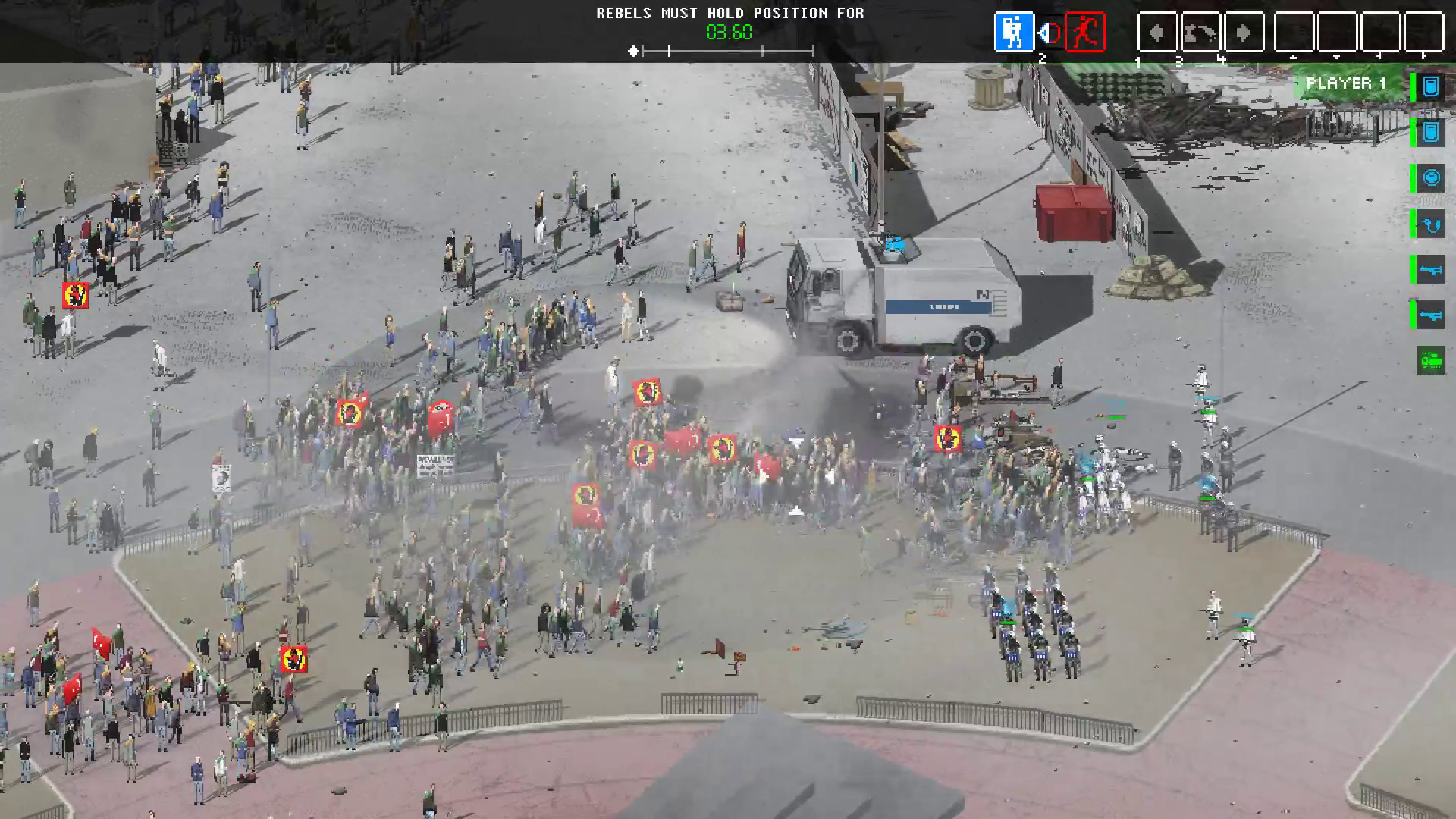 RIOT – Civil Unrest has been a long time coming. It feels like it was just yesterday that the game was announced and unleashed upon Steam Greenlight, when in fact it was about 4 years ago. Truth be told, I forgot about this game up until I recently saw it on Steam’s upcoming releases. Still, I was surprised that it was actually being released under the Early Access programme and not as a full release but, upon further digging, it became apparent that the developers are seeking player’s feedback in order to the improve what is already in the game, and then gradually release content as everything gets polished.

So, what is RIOT – Civil Unrest? As the might suggests, this is essentially a real-time riot simulator (if you can call it that). The game places you either on the shoes of the rioters or the police, across 16 different levels that span 4 different scenarios – the Indignados Movement in Spain, the Arab Spring in Egypt, the Keratea riots in Greece, and the NoTAV in Italy. Currently, these are the only available scenarios, but a level editor is in the works, so I’m curious to see what players can come up with.

As far as how it is as an actual game, I must admit that given all the years that this has been in development, and with very little information going public throughout this period, this leaves a lot to be desired. I had hopes that this would be a “riot simulator” with an interesting narrative behind it, but unfortunately, that is not the case. In essence, while the game does provide historical context behind each of the riots, at its core, it is a weird mixture of real-time strategy and management elements. 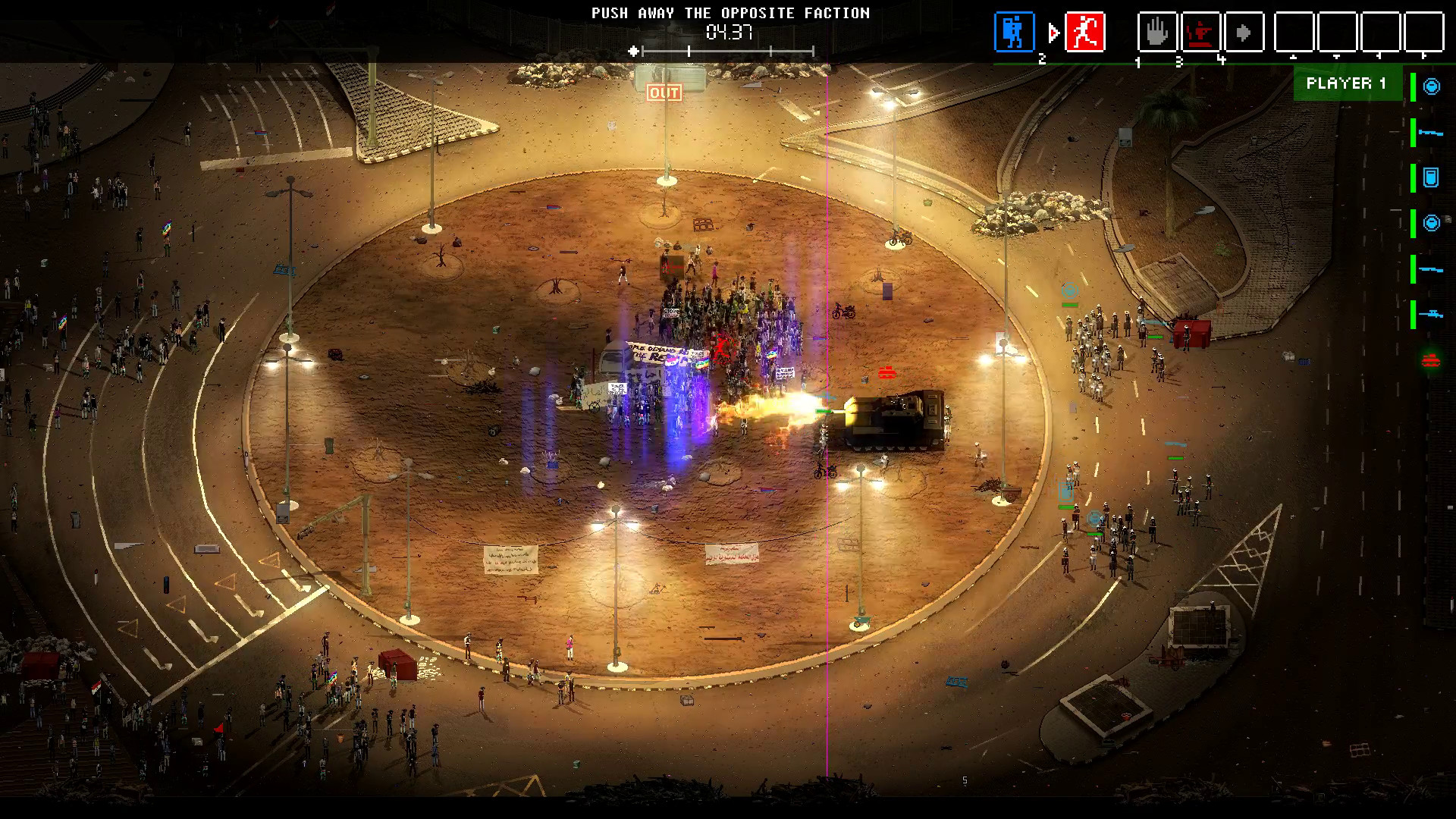 Before each mission, you can customize your unit groups with things such as usable items, different kinds of protection, and depending on if you choose the police or the rioters, you can also choose to take things such as flags, different types of ammunition, and so on. There is one interesting detail regarding the rioters, which is the fact that, depending on what kind of equipment you choose to take with you to a mission, that will also affect the number of people that will attend the riot. This meaning that things like, taking heavier protection and more flags will decrease the number of people that will join you.

With that said, at the end of the mission, you’ll get some sort of debriefing in the form of a newspaper article that reports the events of the riot in question. Depending on your actions during the riot, the public opinion on your side will be affected, but the game doesn’t elaborate on what the implications of this are, other than it will affect you on the next mission.

The more I played it, the more I felt like the game has a lot of issues like this, in the sense that it features some hidden mechanics but doesn’t make the player aware of them. For instance, while playing as the protesters, you can equip throwable items such as molotovs, but they don’t seem to go anywhere close to where you aim them at. As far as I can tell, the game doesn’t provide any sort of indication as to why any trajectory deviation might happen. This might be related to the group’s morale but, if that’s the case, that’s a hidden system that is not transparent to players.

Much like what I’ve mentioned above, there is another thing that really bothers me, and that is the fact that the police can equip one out of ten different baton types, or even take one out of several ammunition types, but the game doesn’t even describe to you, in the slightest, what are the key differences between each of these, leaving the player to play a guessing game. Interestingly enough, while as the rioters you have to manage the number of people that will attend the riot versus the gear that you can take, as the police you are given a budget with which you have to work with. In theory, this sounds like a good way to differentiate both sides in terms of pre-mission management, but in practice, the budget that you get is way too big and you can pretty much afford most expensive things. 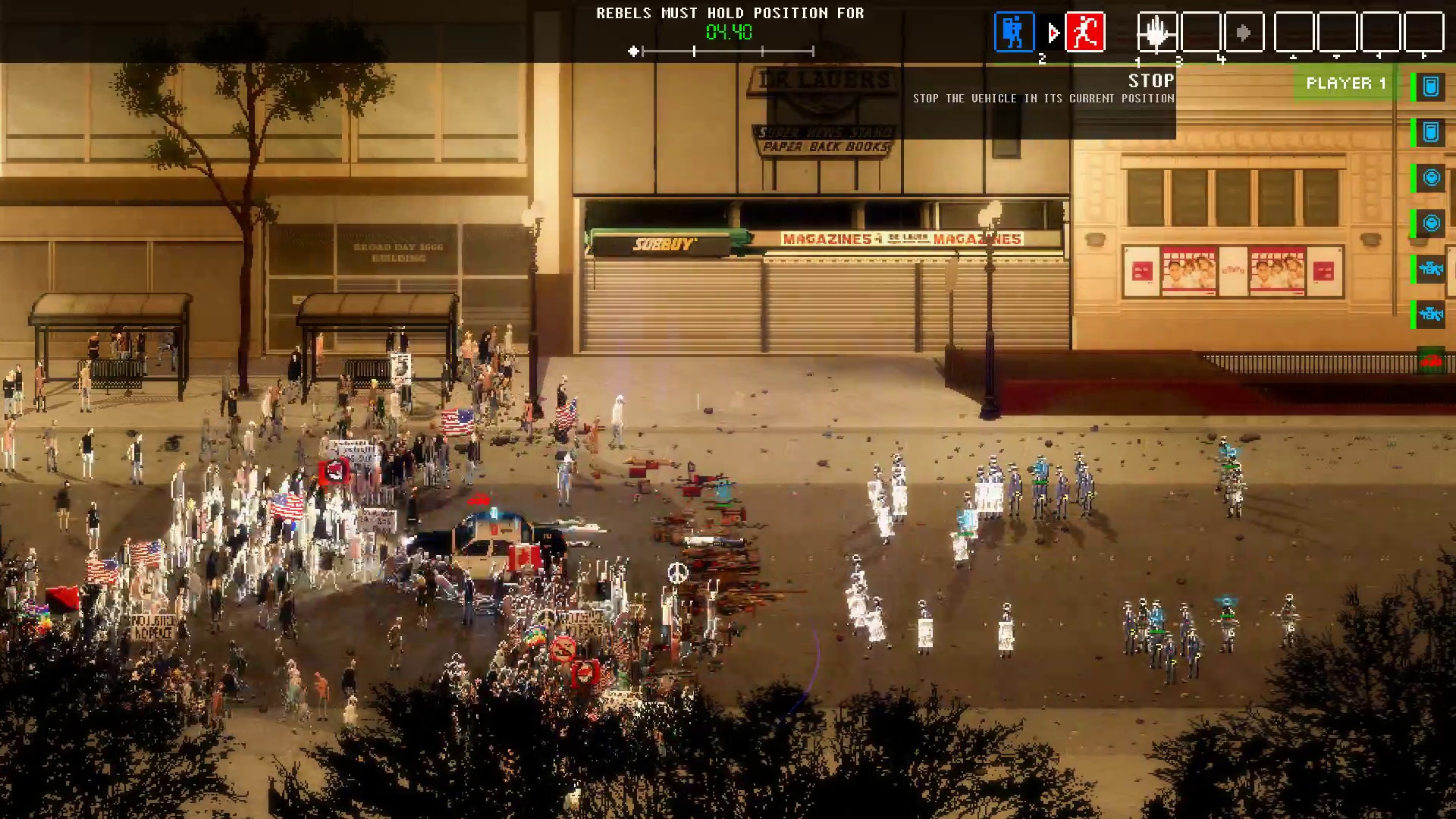 Unfortunately, the lack of feedback in regards to gameplay mechanics doesn’t happen only in the situations mentioned previously. The whole gameplay is kind of a mess, it’s hard to keep track of where each group of units is in the middle of a huge crowd and, consequently, it’s hard to figure out if the abilities and items that you’re using are having any real impact on the outcome of the riot, or if you’re just spamming them for the sake of it. I’ve never been in or witnessed a riot, but if the developers were aiming to try and portray the same sense of confusion and distress that is present in one I’d say that they succeeded. However, as far gameplay goes, this doesn’t translate to an enjoyable gaming experience, at least not for me.

Given that this is a game about riots, and given the clear focus on different events throughout recent history, I was expecting a more focused narrative but, in the end, all you get are a series of cutscenes in which the camera is often too zoomed in for you to actually understand what is going on. This is mostly due to the fact that, while the game features some pretty great pixel art, when you zoom in on any frame it clearly shows the lack of detail and it is unpleasant to look at.

Honestly, this definitely doesn’t feel like a game that I’d sit down and play on PC, it honestly feels more like a mobile game, and a proof of concept at that. The lack of a tutorial is only aggravated by the unintuitive and confusing interface, as well as the lack of any visual or audio feedback in regards to your actions during gameplay. The lack of key features that you’d expect on a PC title, such as locked frame rate and the ability to change the controls also exacerbate my worries for the future of this title. After so many years of being kept in the dark, this feels like too little and a bit too messy for my own taste. My personal recommendation, for now, is to wait to see how it develops during early access.