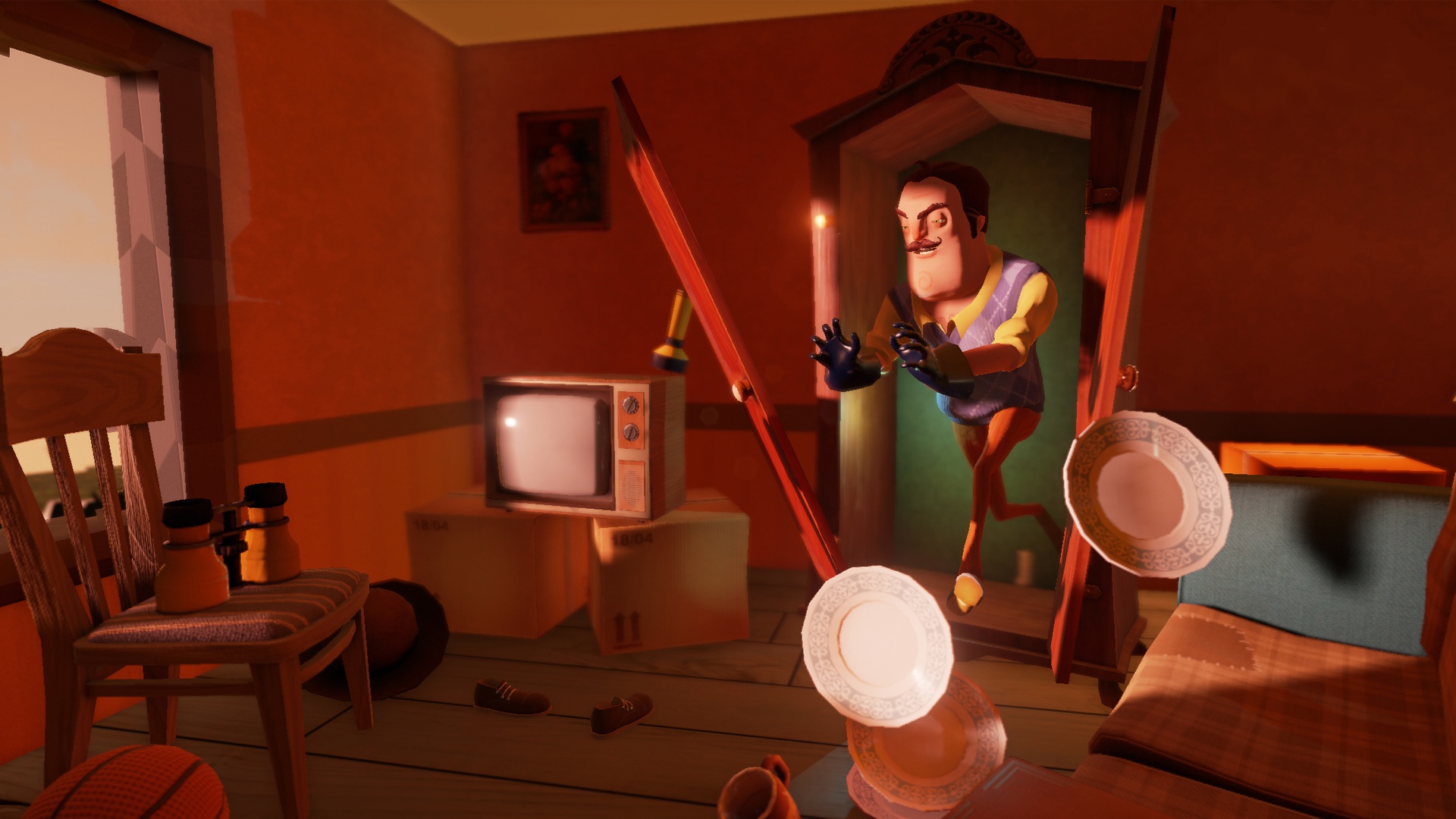 Before we delve into the basement with “stealth horror” game Hello Neighbour, let’s pause and remember the golden days of gaming. I’m talking about the days where a small team of humans plugged away at their project, until they felt it was perfect – then they released it. People who poured their hearts and souls into creating amazing games, seem to have sadly faded into the background of today’s gaming industry – which is rife with companies releasing half-baked ideas for premium prices.

Prime examples of recent industry flops, include the overly-hyped “For Honor”, “Star Wars Battlefront 2”, and who could forget “No Man’s Sky”. Al of these titles promised big, yet sadly they couldn’t deliver. If they were a postal worker, they’d leave your post at the bottom of the driveway, much less walk to the door and put it through your letter box.

Apologies for this lengthy preamble, but unfortunately Hello Neighbour falls firmly in this category of over-hyped video games. In fact, I’m sticking my neck out here and saying it’s one of the most underwhelming gaming experiences I’ve ever had in my life. I’ve never come across a game that I’ve cared so little about. But let’s get into the whys, shall we?

The whole premise of Hello Neighbour, is that you’ve witnessed your neighbour getting up to some shady things, and like the little toe-rag you are, can’t keep away. You’re driven by an inner curiosity (or stupidity), which sees you breaking into said neighbour’s home, in order to find out what he’s up to. Your moustachioed opponent however, is incredibly shifty and vigilant at all times.

One really cool thing about the game is the fact that the neighbour is supposedly a dynamic AI, that will learn which areas you frequent, and put in place suitable measures to stop you from gaining access via those areas. A simple example of this is if you try to walk through the front door and he catches you, he might spend more time loitering by the door in case you try it again. He will also use various other methods of prevention, but I won’t spoil for those of you who will find out if you get past act 1. 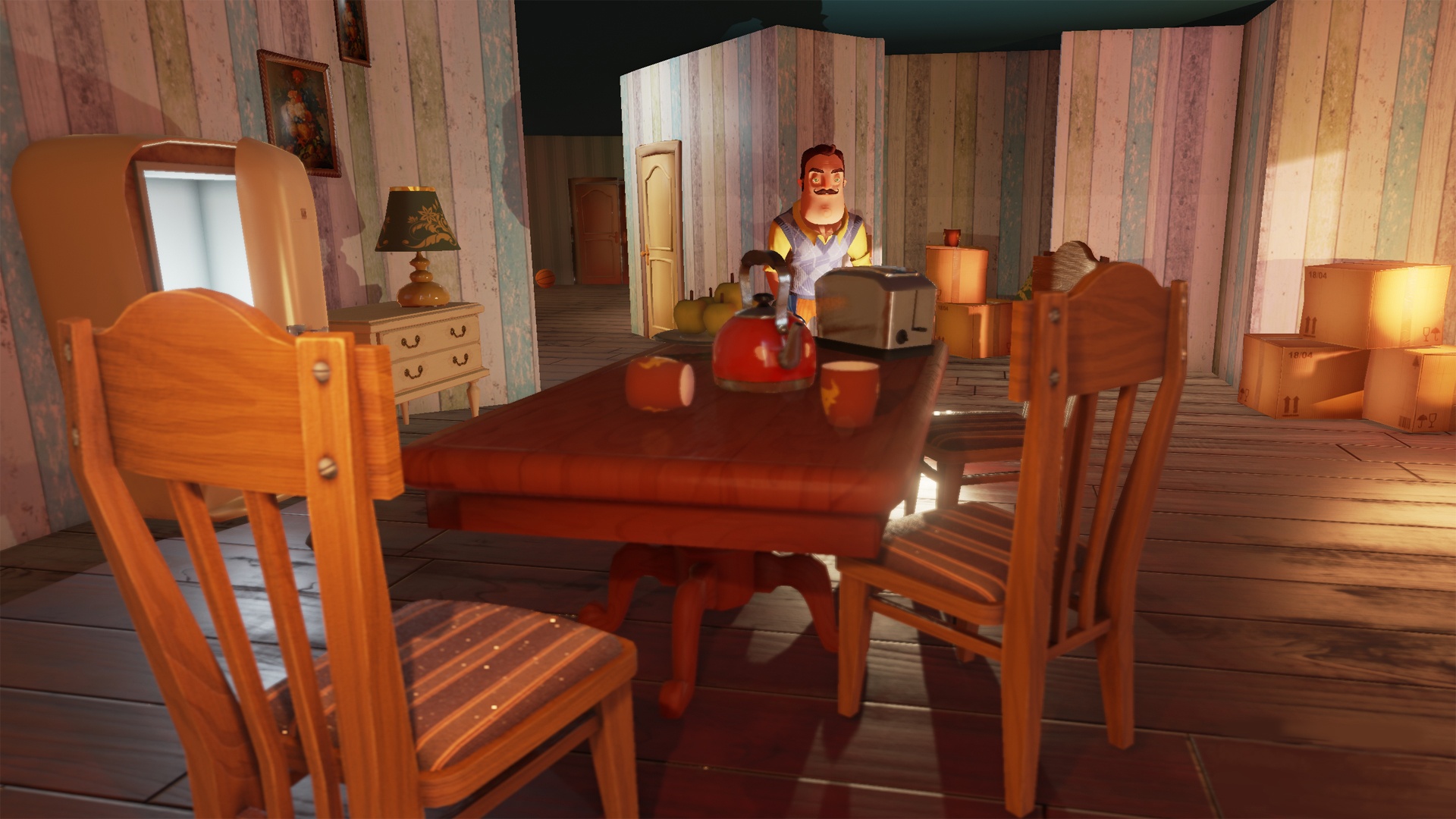 Every item is supposed to have a use in Hello Neighbour. I’ve found that most items are actually fairly innocuous. In fact, you only really need a few choice items to complete a level – everything else is just trash. Once I learned this I stopped rummaging diligently through his drawers, and looked for anything that might be used to smash a window or light a darkened hallway.

Hello Neighbour should be about jump scares, paranoia and horror. The sad thing is that once you’ve been cause a couple of times, there is no horror element any longer. There’s no consequence apart from the fact you get thrown outside by the neighbour. One of my bugbears here is that the screen goes black (with the exception of some distant trees which don’t de-spawn, before you magically drop back outside the house again. The immersion of the horror genre is broken, and thus the game has no kind of scary consequence to you getting caught.

The game doesn’t really have much of a soundtrack – the occasional horror accent is offset by eerie silences, but Hello Neighbour is more about listening for the movement of the neighbour. With this in mind, I was disappointed by the lack of spatial sound, which made it harder to pinpoint how close you were to being caught. When the neighbour gets close the game will alert you by introducing some horror music that ramps up as he moves towards you – culminating in a rampant soundtrack when he locks eyes on your location. This is cool, but often detracts from the reality that if you were actually trespassing, the neighbour would likely not alert you to his presence until he was right there behind you.

Graphical tearing and poor optimisation of textures is rampant in the Xbox One version of Hello Neighbour. This is such a shame because the art style is fantastic – it invokes a child-like atmosphere, which borders on slightly insane and nightmarish, yet this is tarnished by poor texture resolution and clipping bugs.

Despite my misgivings around the graphical presentation of the game, Hello Neighbour runs well on Xbox – I’ve not had any considerable (or game-breaking) framerate drops, which means you can get chased to your heart’s delight without the game suddenly grinding to a halt. 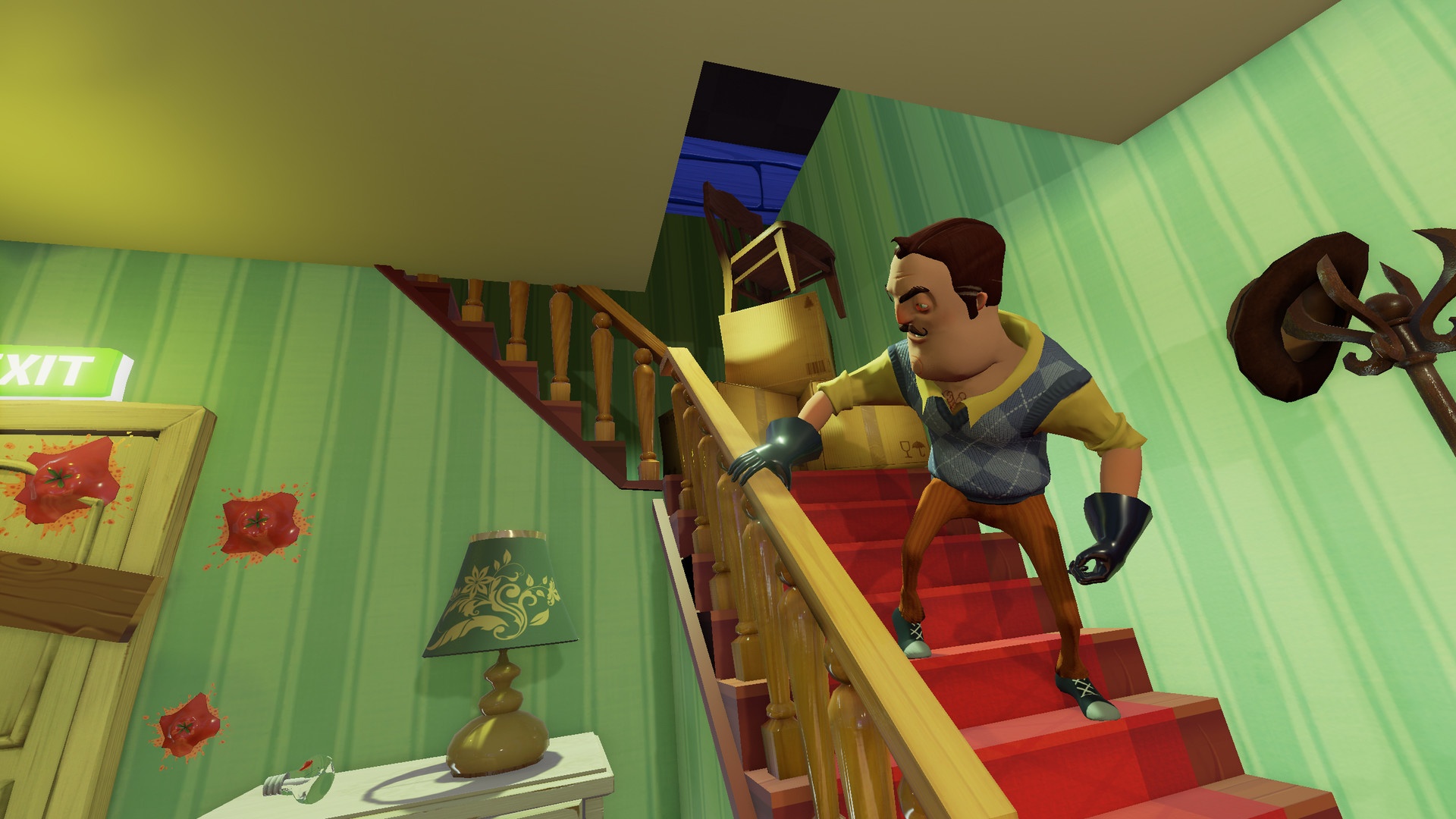 Hello Neighbour’s story is presented in 3 acts. Each act begins with you solving some kind of puzzle in the neighbour’s house, before gaining access to his basement. Then you continue the level in the subterranean labyrinth of the neighbour’s home. This is a cool way of breaking the game up and layering in some progression, but the core gameplay of Hello Neighbour is fundamentally flawed. The main reason for this being that the game does not reward the player for their use of environmental observation, nor does it reward outside-the-box thinking. Instead the whole game boils down to trial and error.

Many of the “puzzles” in hello Neighbour culminate in you finding an object that has to be used totally illogically. If this was meant to be funny it’s gone over plenty of people’s heads. I found a magnet after trying to complete what I thought was a logic puzzle to do with wiring in the house. Turns out that all I had to do was use the magnet to magically whizz a key through a door to complete the first portion of a level. It’s not a puzzle, it’s a joke.

As I stumbled further into Hello Neighbour, I found that play sessions got shorter and shorter, until I had no more motivation to bother with the game. I don’t care what’s in the neighbour’s house, let alone his basement. In fact, the most interesting thing in the game were the contents of the neighbour’s fridge – nothing. There’s sadly no fun factor here beyond the first half an hour for me, which is why I’ve opted to score Hello Neighbour so low. It doesn’t feel like a game – more of a concept.

I honestly feel as though this game was based entirely around the idea that the developers could create a more intelligent form of game AI. This is exciting and kudos to them for plugging away at it and making a game from it – it’s just not got the finesse or polish that one might expect for a fully released title, sold for full whack!

Sorry to end on a negative, but I can’t believe that game companies feel it’s ok to release a game in such a state – it shows what they think of us as gamers sadly. Hello Neighbour is absolutely not worth the £29.99 price tag on Xbox One, and you’d be wise to steer clear of the PC version (£22.99) until they’ve A) added more content, B) fixed the current abundance of bugs, and C) it goes onto a deep sale.