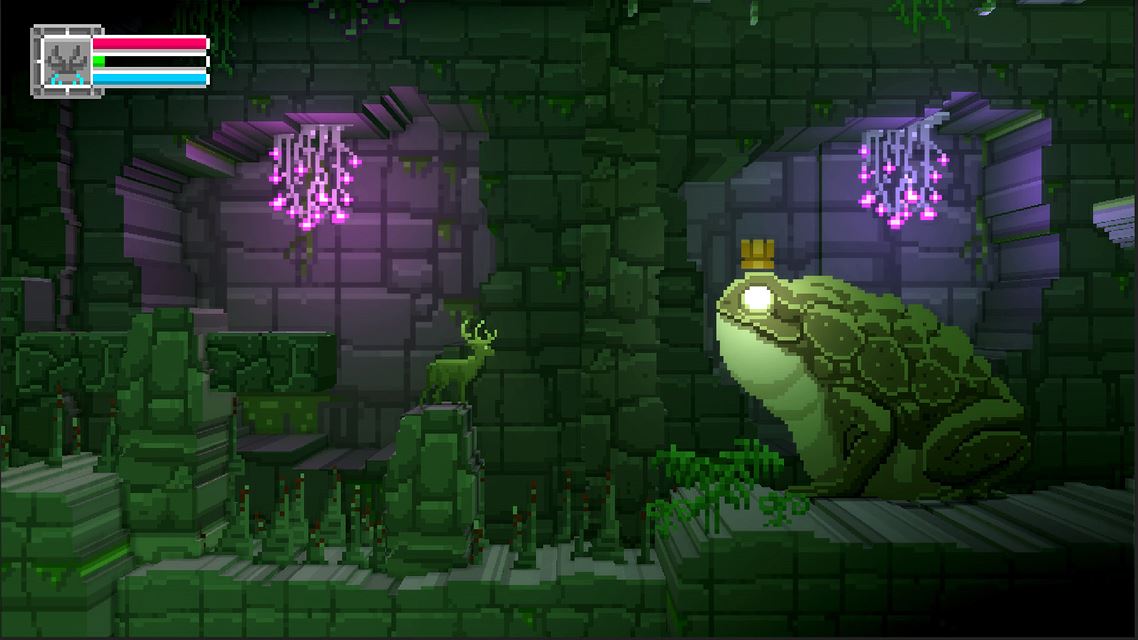 There are just some games that you can’t help but have a special affinity for. Example: everyone can successfully argue that the Final Fantasy franchise hit it’s pinnacle nearly two decades ago, but we’ll keep buying the games. Why? Because, deep down inside, we keep hoping the next title will be on par with the adventure that Terra, Shadow and Celes took us on back in the SNES days. And we keep being disappointed, but still we try. So, even though I know I will end up being bored by the end, I keep digging down and trying to find something more in a little title called The Deer God.

For those who aren’t aware, The Deer God comes to us from Crescent Moon Studios and has a plotline that’s tangentially similar to the forgotten Disney classic Brother Bear. You’re a beer swilling, plaid wearing hunter who decided to shoot deer out of season one drunken night, and the spirits of the forest didn’t take too kindly to your antics. For your crimes, you are reborn as a fawn, a baby deer, and must survive in the wild and understand what it means to be an animal at the mercy of Man. Oh, and this also coincides with some kind of weird prophecy the deers have regarding the coming of someone who’ll bring balance to the forest. It’s deeply confusing that, in the same breath, your enchantment is a curse to you and a huge boon to everyone else. I’m still, to this day, having a hard time wrapping my mind around it, but whatever. 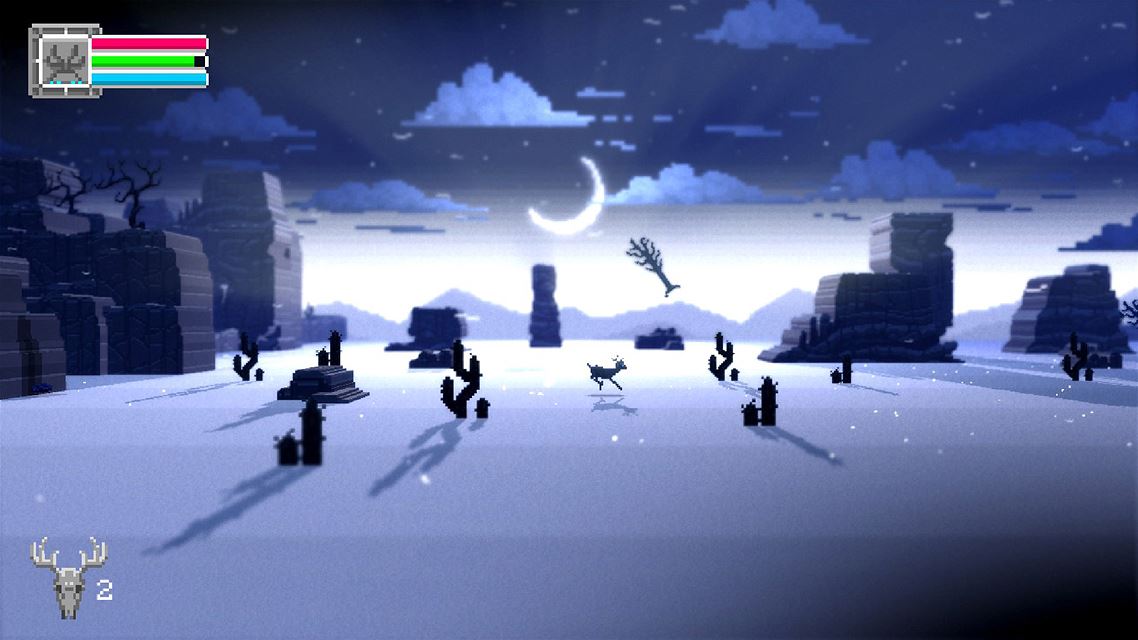 The Deer God plays out in a sidescrolling pseudo adventure that is equal parts art exploration and survival RPG. As a fawn, you slowly grow, get antlers, and may even get a family. The family part is crucial because, as screwed up as it is, those babies that you may get a doe to pop out act as your extra lives. That’s not to say that dying in the beginning is the be all end all, but having little helpers follow you around for you to reincarnate into certainly doesn’t hurt. Of course, you need to make sure that you trim your pace as a result, because deer only run so fast and the fauns can’t always keep up with you, meaning that your continue token could be anywhere in the game and you won’t know where you respawn till it’s too late. We could spend all day looking at the implications of this kind of mechanic, but it’s more fun to simply not think about it and try to progress forward, because you still have to worry about health, food, and the fact that most of the animals in the forest are surprisingly hostile towards you. Which I totally don’t get, because I can’t tell if they know that I’m a man disguised as a deer, so they hate me, or if porcupines are actually dicks and no one in the human world knows it.

Over time, as you play out further into the game, you may also find yourself slowly adapting new powers that are distinctly un-deer-like. Thanks to herbs, feathers and other random items that you find along the way that have both apparent uses and some rather strange applications. Sure, you can double jump merrily on your own, but wouldn’t you rather grow a giant toadstool on the spot and have that be a giant trampoline to mess around on to reach new heights? And some powers can stack, so, in the blink of an eye, you become an invisible ghost deer who isn’t as affected by normal gravity AND you’re surrounded by a swarm of killer attack bees. When you really start getting stuff going, The Deer God becomes borderline absurd, which is fascinating since 85% of the game never really calls for any of these powers. Sure, there are puzzles that need to be solved and errands that need to be run for the Deer Elders, but most of them involve running somewhere, moving a couple things and then running back to confirm that you’ve completed the quest. Still, being the Beast Master and having dominion over falcons and turtles while being a deer yourself is kind of fun.

The Deer God delivers most in the category of graphics and design. No one can deny that the game looks beautiful, and uses a certain haunting style of pixel art that reminds me heavily of Sword and Sworcery. Everything has a sharp, blocky feel to it that’s minimal and honest in the presentation, and it works out incredibly well in terms of keeping the player locked into the story and environment of the world. The only shortcoming that comes with this level of pixel art is that things can get a little blurred and murky at time. Crescent Moon did a great job of having depth of field in terms of foreground and background detail, but the result is sometimes you get a little lost in everything, and that can be a huge hassle if not a gamebreaker. For example, when you’re being pursued by two mountain lions (cougars?) that have you hopelessly overpowered, it doesn’t help to disappear behind trees and strategically placed obstacles that may or may not be solid. Plus, since the game dynamically changes weather and time, suddenly running in the middle of the night makes things pretty damn difficult to gauge where is safe to jump and what is distinctly a pointy set of rocks. In a bid to make things interesting and different, the team may have overstepped and created moments of frustration and insanity. 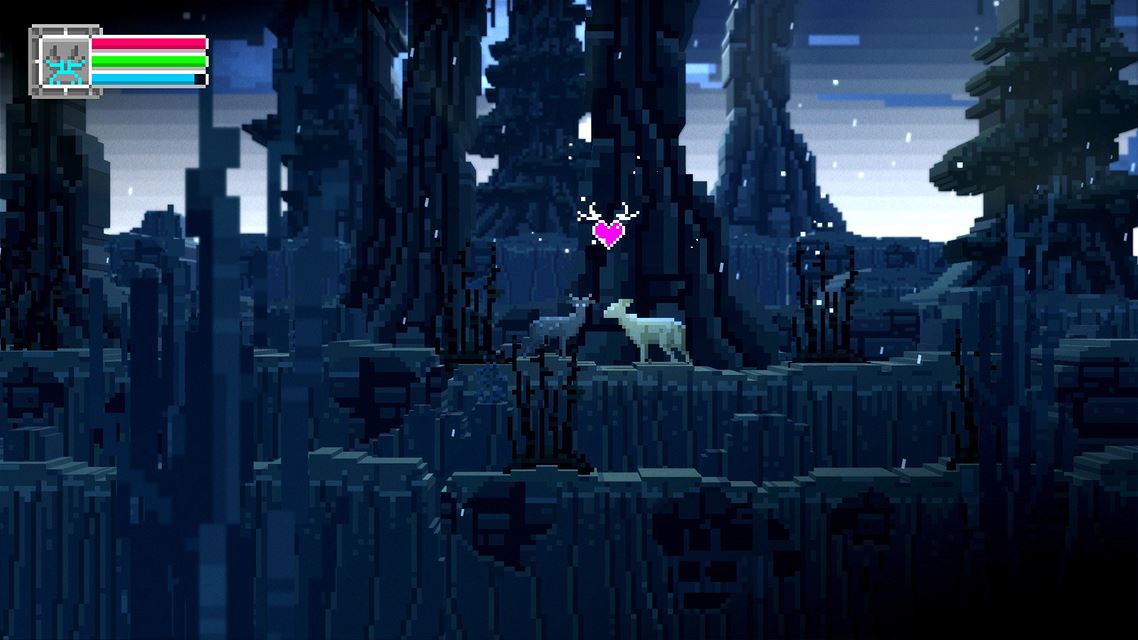 The only downside that really stands out for the Deer God is that the story is short and replay is entirely based on something like personal appeal. Far from a roguelike or a game with serious advancement, you’ve seen almost everything you’ll see by the time you reach the end of your journey. Sure, there’s a bit of an achievement system and some different ways to solve problems, but the main storyline begins and ends in an afternoon. Dedicated players could probably knock it out in under three hours, and there will certainly be dedicated plays. Still, we live in a world where players want to get the most out of their game, and we aren’t limited to a single title that gets released every month like the 8bit days. There is a plentiful market before Switch owners, so, unless you’re absolutely locked in on what you’re playing, it’s easy to get bored and move on.

Still, The Deer God does a phenomenal job of balancing storytelling and art with actual gameplay. Far from being a “thinking” piece, it’s a generally fun sidescroller with unique mechanics, great presentation and some ridiculously easy bosses, plus a sort of “moral” at the end of it all. It’s worth trying at least once, but this won’t grab the eyes and wallets of players who may have already been down this path. If you’ve never walked a mile in someone else’s hooves, however, it might just be time to see if you can be the transhuman that everyone’s been waiting for.