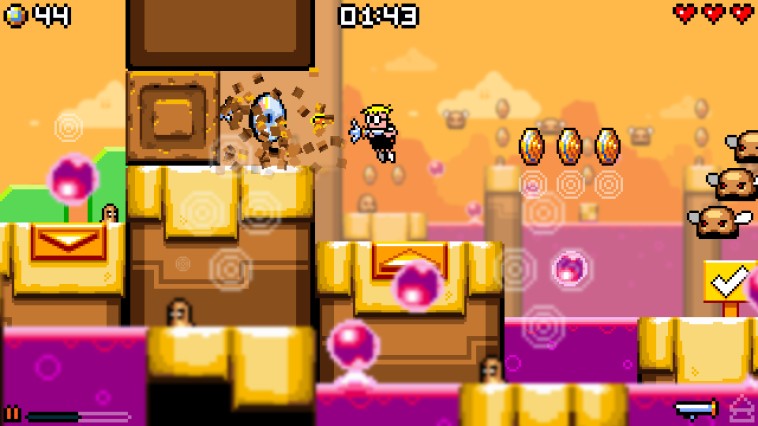 These re-releases from the 3DS to the Switch are something else, and I’m loving it. It’s not that the 3DS was an unpopular system; you’d have to have been inside of a shed with no lights or windows for the last six years to think as such. No, it’s that the 3DS makes most of its cash via physical copies, the cartridges that are easy enough for kids to visualize and understand and for parents to justify buying. But digital purchases are still a bit of an odd frontier, even if it’s becoming more mainstream with each passing day. And the Switch has such a massive digital library that it only makes sense to bring back titles that maybe didn’t get as MUCH acclaim as they deserved. Mighty GunVolt clearly needed more love, so I’m still glad that Init Creates pulled the trigger on that one. And now, Renegade Kid, the quiet force of Dementium and Moon, has finally released a special Mutant Mudds Collection, and it’s glorious.

For those who aren’t ware, Mutant Mudds is as dirt simple a premise as you could hope from a sidescrolling game. You play Max, a kid who was trying to watch TV when aliens invaded, called Muddys. Far from being content to just relax while an invasion happens, you grab your squirtgun and jetpack (like all kids have) and set out to deal with these monsters one blast at a time. Along the way, you have to contend with some truly difficult level design, which is intentional, and some bizarre perspective shift, also intentional. There’s also a plotpoint that comes up about Water Sprites and how they affect the Muddys, but, to be totally honest, I ignored most of the plot because I just like playing the game.

Mutant Mudds Deluxe and Mutant Mudds Super Challenge are two different titles in this collection, and I’d highly advise playing the original before the Super Challenge. These two games are the main stars of the collection, and I think a great representation of what Renegade Kid can do. Since these titles were originally for the 3DS, Mutant Mudds focuses heavily on perspective shift that brings Max into both the foreground and background at different times in order to collect different gems that are scattered throughout. Being forced to view the game in three different ways sounds like it should be taxing on the eyes, but it truly isn’t. There was a lot of time and care that went into making sure that a game whose main gimmick is the different layerings was pleasant to experience, and I think there’s a lot of success here. The different perspectives even play into the main game itself, with certain traps and enemies catapulting you into other terrains, sometimes to your benefit but almost always to your detriment. 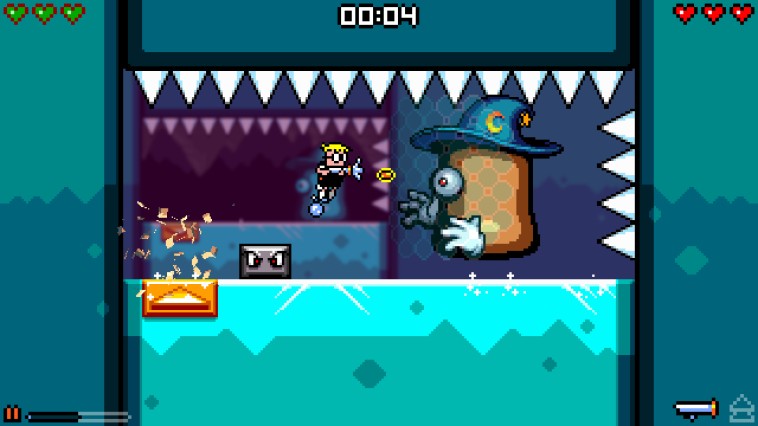 Mudds pays a bit of homage to the original 3D Nintendo platform, the Virtual Boy, with some “hidden” rooms where you can collect gems and fight Muddys in brilliant, glaring red light. Since this isn’t being drawn onto your eyeball like the original VB, players don’t need to take breaks every 15 minutes to enjoy these public Easter eggs. I really loved finding these, because Renegade Kid is determined to make Mutant Mudds as retro as possible, and what better way to do that then to acknowledge where the gaming world went before?

Now that the gushing is out of the way, please keep in mind that Mutant Mudds is HARD. The jetpack ability works on a limited gauge, and you need to exercise it properly if you want to get anywhere in this world. Muddys don’t always move fast, but they will mess you up and can appear at the most inconvenient times. And Max will straight up die the second he touches spikes, and there are plenty of spikes around. Mutant Mudds is meant to really emulate the difficulty of the 8-bit generation, by showing that finesse and simplicity can be complicit partners in something truly challenging. I actually like Mudds far, far better on the Switch because it feels like the game responds better and gives the player more tactile feedback than the original 3DS versions ever did. 3DS Mudds constantly left me feeling like I was suffering because my buttons weren’t responding properly, or the system was giving a split second lag that made everything terrible. On the Switch, my failures are 100% my own, and I can be mad at myself for missing a jump and also celebrate nailing a landing in a very tight situation. This Switch release is a shot at redemption for folk who didn’t do as well on the small screen.

Once you finish the original Mutant Mudds, Mutant Mudds Super Challenge is more of the same BUT HARDER. The very, very first jump you make needs to be a well timed jetpack fire that catches you at the apex of the leap or you can’t even start the game. Super Challenge is basically the “game plus” of Mutant Mudds, not adding a ton to the plot (go get the aliens!) but including a bunch of new level designs with harder platforms and more frequent, tougher enemies. This is something that’ll separate the fans from the fanatics, but I’m glad it’s included in the collection. Players won’t cheapen their own joy by only playing the original, but making sure that this Deluxe version is ready and available for the eager is simply a nice touch. Deluxe was also designed quite a bit after the original, so the controls were never a problem to begin with. In any case, it doubles the length of play that you would normally get and is absolutely worthwhile to those enjoying the original. 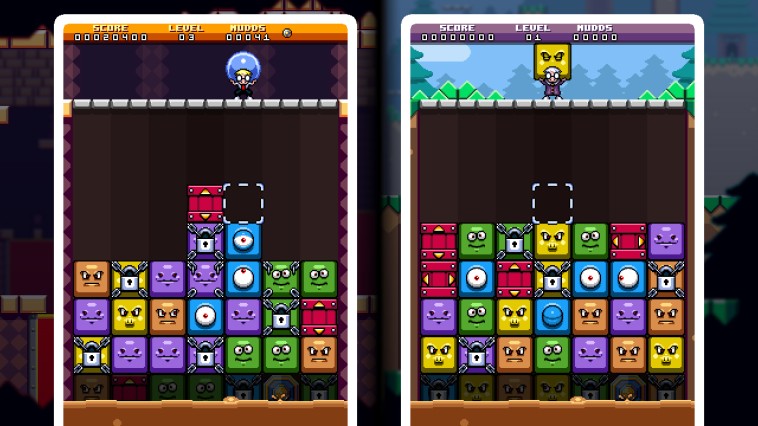 Lastly on the collection is Mudd Blocks, a vertical puzzle game that’s equal parts Tetris Attack and Snood, and I enjoyed it very much as a nice addition to the collection. Max hurls down various “blocky” Muddys that he has, and the objective is to simply keep clearing the screen through random explosive charges that he gains. The explosives can set off chain reactions thanks to arrow crates that can redirect the blast, and the careful player can create some truly room clearing situations. Not only is it a decent puzzle game unto itself, but you can play the damn thing with a vertical Switch. Such a tiny note of attention that’s decidedly necessary for a game such as this. There’s plenty of versions of Mudd Blocks to play as well, from versus and endless to a special “rescue” mode where Max’s brother has to free him from a 50 hit cage while also making sure the Mudd Blocks don’t overwhelm him. I can’t say this is worth the price of admission alone for The Mutant Mudds Collection, but this is a damn fine addition and anyone who enjoys a good puzzle game will get hooked pretty fast.

All in all, this is exactly how you should do a re-release of your older titles. Polish them up, make ‘em shine, and give the fans a little extra to entice them to want to revisit everything. The Mutant Mudds Collection made me appreciate these older titles in a big way, and the Mudd Blocks was the icing on the cake to make it a fantastic experience overall. If you’ve never played Mutant Mudds before, or just really want that vertical puzzle game with a kickass 8bit soundtrack, then you need to get this onto your Switch immediately. It’s not just worth the price of admission: it’s a damn steal.