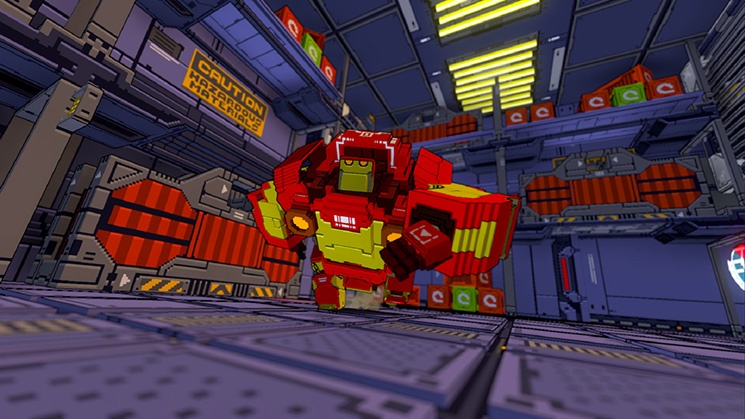 A good roguelike is hard to find, at least when it comes to suiting one’s own tastes in every possible way. Recently, roguelike or procedurally generated games vary wildly on what they consider to be the best balance of random and preset. Take Neon Chrome, for example: this game randomizes most aspects of weapons, enemies and level layout, but still manages to keep the difficulty in check and make sure that you are slotted as a predetermined character type and not, say, a fish with a hat. It’s a great choice that still keeps the game fresh but playable. So making sure that something is up to chance but still engaging is quite a feat, and not always one that works out for the best. Heart & Slash pulls this off WONDERFULLY.

To start with: Heart & Slash is a game set somewhere in the far future, where there’s been a robotic uprising and now machines basically rule the planet. You take the role of Heart, a robot with a conscious, who is tasked by Dr. Light unknown to be the robotic savior and take back the world, one room at a time. Of course, there are plenty of robots who like running the scene and would rather you piss off and explode than give up their seat of power. Even though this plot sounds mega familiar, I assure you there’s plenty of original takes right out the gate, so please don’t pay too much attention to the evil robot who shows up and is clearly connected to Heart somehow. The point is you’ve gotta go rock the face off of things and you do so with…a rubber duck?
The setting for Heart’s quest for glory is a 3D brawler that sets the roguelike effect into motion pretty quickly. Everything is permadeath, so don’t be surprised if your time invested and progress goes up in smoke after one bad encounter and now you’re mad forever. The game begins by giving you three random, and I mean truly random, items. You may get armor, you may get a shield, you will probably get a weapon but I actually can’t guarantee that. My very first time out, I got a simple sword, a set of arms (which is literally a better pair of arms) and a rubber duck that I wore as armor and it did jack all to save my stupid ass. Needless to say, I got stomped pretty quickly. The very next generation out, I got three completely different swords, including one that was a goddamn freeze ray, and things went significantly better Along the way, you will find additional items hidden in different rooms and give as rewards for clearing bosses and boss rooms, and you’ll have the choice to swap out what you’re currently holding or recycle the item for healing hearts. Keep in mind, these are healing only: you can’t max out a life meter with extra slots by junking a flame sword. 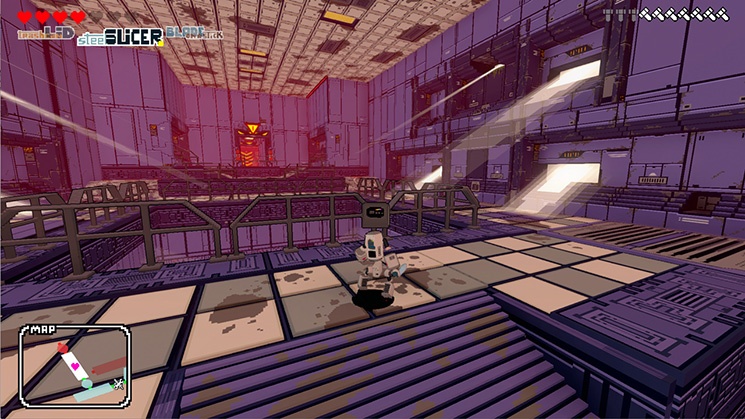 Heart&Slash, as I said before, is a brawler, but it’s really more of a slasher than anything else. Heart can run, jump and evade attacks to his own best ability, and you have weak and strong attack buttons that can also be used in mid air. You really gotta make sure you understand your aerial attacks before you go to do them, however: more than a couple weapons interpret a strong air attack as “slam down on the ground to hit ground enemies.” This helps you very little when your target is still in flight and shooting lasers at you. There’s a massive variety of enemies, with some being clever, colorful re-skins (and improved AI) and some being totally different ideas, like ferocious robo dogs and unassuming boxes that somehow manage to be nimble and painful. This is a game where you’ll be staying on your toes a lot of the time, and failure to use the evade button to make sure you don’t get murdered will result in a fast reroll.

Thankfully, the learning curve for Heart is pretty even, and you’ll get into rhythms fairly quickly. This game isn’t the strategic mastermind of Furi, but it also doesn’t ask you to just slam the attack buttons over and over till the credits roll. You’ll see patterns, figure them out, and it’ll let you get through earlier levels faster as you have to restart again and again. When you run into bosses (like Slash), you’ll have a fairly short amount of time to get your bearings or they’ll pound you into paste. Having said that, the second and third time you meet these bosses from re-running will seem easier and easier. By the time you hit your fifth restart, it’ll be a simple situation that just asks you to deal with these inconvenient monsters in order to get back to where you last were.

And most of the enemies in Heart&Slash drop some kind of powerup, which, in turn, allows you to slowly power up the equipment you have. Some, like the swords, give faster swings and harder hits when you dump your investment into them. Others, like the rubber duck, do nothing except urge you not to power them up (which I did anyways, for my own investment). Powered up equipment also becomes worth more as recycle hearts, so they’re like last ditch health potions you carry around for emergencies. I really like this setup, because it doesn’t feel like you’re wasting time to charge a piece of equipment when there might be more along the way. Still, when you find that baseball bat, hang onto that and max the sucker out: it’s so damn powerful, and the tiny “smash” word bubble that appears lets us know the devs love either Smash Bros or Earthbound, and I’m down with either. 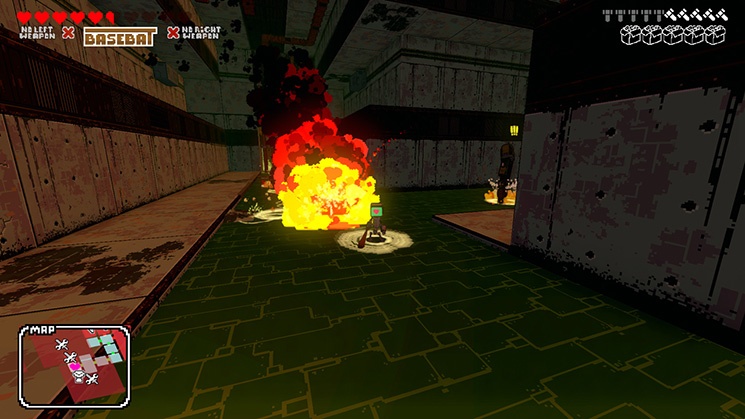 Appearance wise, this game is fantastic. Never mind that Heart reminds me a ton of the robot from FLCL, there’s this cool, slightly angular texture to the entire game, from start to finish, and the camera doesn’t make me sick when I need to spin around like crazy in order to keep track of the enemies. Yes, Heart moves a bit fast and it can be frustrating keeping everything in scope, but it’s nothing that can’t be overcome by simply being ready to beat some heads. The designs of the enemy robots are also very cool, and it’s clear that the developers wanted to set themselves apart from existing brawlers and really make Heart the kind of robot you want to fall in love with. There are options to choose other robots to play with once you unlock them (different, hidden characters, always fun) but I always came back to Heart.

Mix in a happy hardcore soundtrack that keeps the game flowing and the hits coming, and you can see that Heart&Slash is a treasure trove for roguelike fans that need to get there hits in. You’ll rejoice when you get an electrical sword, you’ll curse when you get the shield (I never play defensively). You’ll be frustrated when you explode just out of reach of a healing heart and you’ll reload, eager to see what the game deals you this time around. In short, if you want to brawl in style and have a great time, you’ll love Heart&Slash.