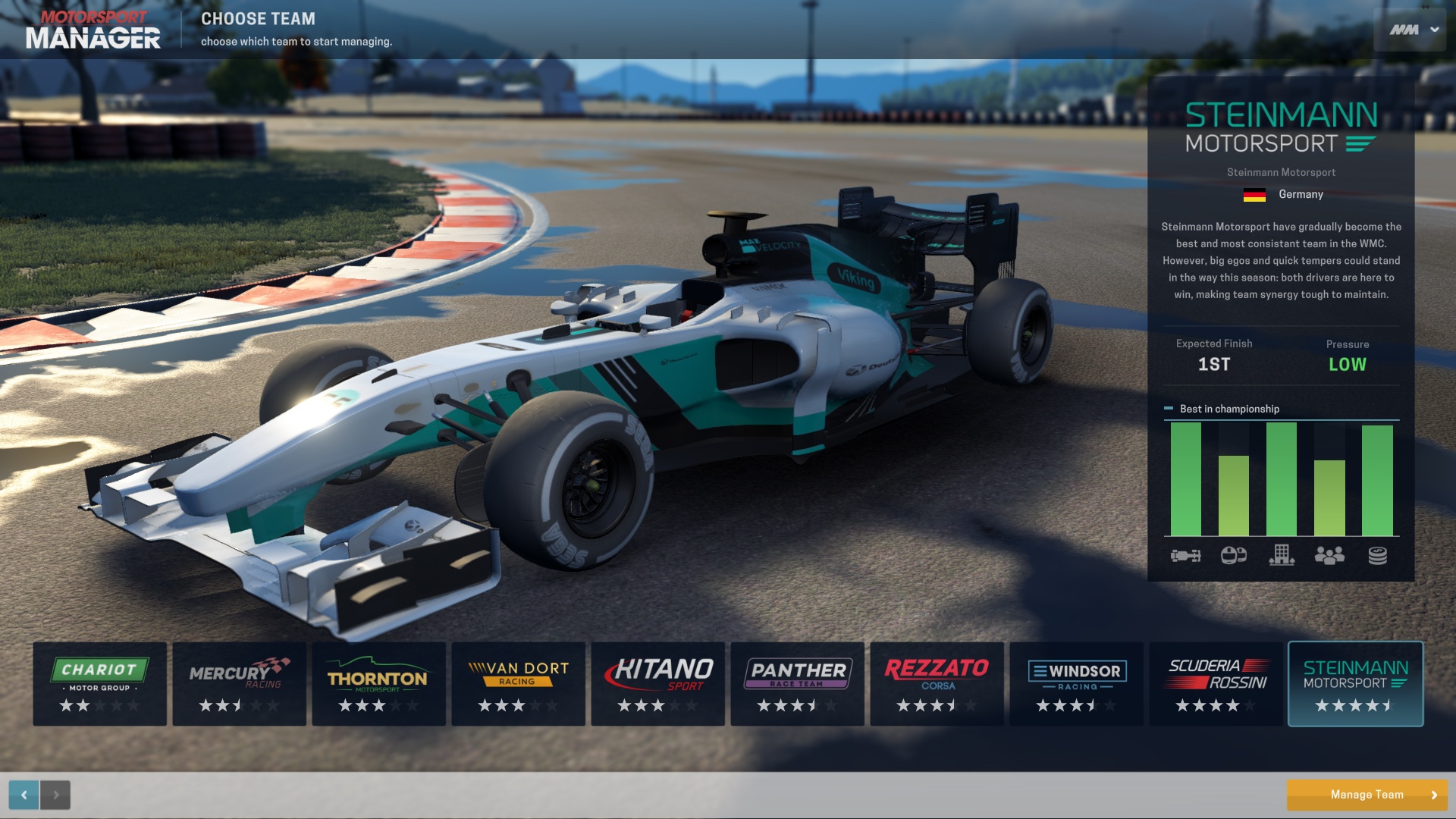 I have to admit, I haven’t been the biggest fan of Formula One in recent years. Restrictive rule changes and self-serving political manoeuvres have soured it for me, even though I know there have been some epic races and rivalries in the mix. Motorsport Manager distances itself from both the positive and negative connotations of real life racing (and avoids tricky libel issues) by doing away with any official license at all; and it is a much better game as a result.

Unencumbered by the egos of real life superstars and the legal might of the FIA, Motorsport Manager is able to present the player with a deep, engaging and ultimately fun racing team simulation that succeeds because it provides subject matter that is accessible to almost anyone, but deep enough for dedicated fans of motor racing. The former is aided by an exceptional tutorial, that walks the player through every aspect of operating a racing team in way that is considered, useful and interesting enough to mean that you won’t skip through it as fast as possible.

The tutorial (and in fact, the game as a whole) is aided considerably by the presentation in Motorsport Manager, which is generally top-notch. Outside of races, there are a number of tabs across the top and bottom that enable rapid access to various team management functions, and there isn’t much that you can’t control. Possible tasks include building and upgrading team facilities, hiring and firing staff and drivers, picking sponsors, building and upgrading parts and much, much more. Motorsport is a complicated world, and there must have been serious temptation to include insane detail buried inside sub-menus, but thankfully Playsport appear to have struck a fine balance between the detail needed to ensure long-term interest, and the accessibility needed to attract players in the first instance. 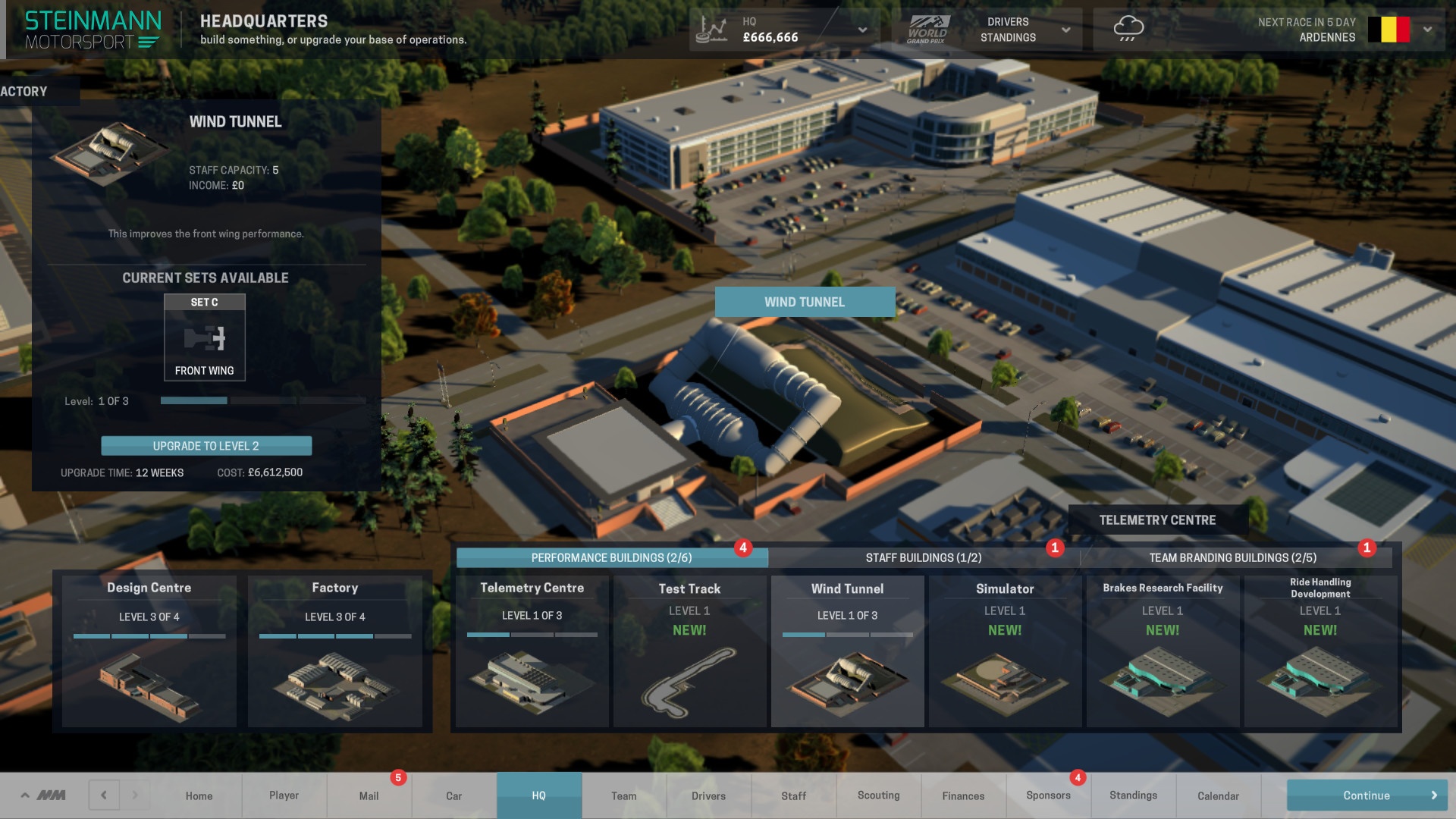 As an example of this accessibility, the way that part upgrades is handled is perfect. The player may choose to build an upgraded part for any area of the car, with a success rate and attribute set based on his existing engineering team. Once the part has been created, it can be fitted to one of the team cars, and the experience gained in creating that part is retained, enabling the player to choose two attributes for the next part of the same kind. The interface for doing this work is straightforward enough to understand, but the chosen attributes have a real impact on the car that the part is fitted to. This system totally removes any unnecessary fluff that might have come with a game based on real manufacturers, or technical information such as horsepower or weight that doesn’t directly explain to the player how it will change the performance of cars.

Other aspects of team management are generally more straightforward, with the possible exception being negotiating with staff and drivers. These activities are unusual among other aspects of Motorsport Manager because they lack the clarity of outcome that flows through most other areas of the game, although that may be a design feature that aims to simulate the real life unpredictability of human nature. Basically, once a potential team-mate has agreed to discuss terms, the negotiation takes place based on the player making one or more offers to the prospective hire, who will provide feedback about how close to agreeing terms they are after each offer. The issue is, whilst the game is clear about what areas the offer is good or bad in, it doesn’t provide a clear steer on the size of the deficit, meaning that the star driver you really want to sign can lose patience with you very quickly. This does improve with experience, but it is a little annoying to begin with.

When it comes to championship and team selection, there are three tiers of racing to play through, with teams in each that range from very poor to almost unbeatable. Each of the racing tiers is based loosely on real racing, with Formula One representing the peak, and two lower class events below it. The basic capabilities, expectations and budget for each team is clearly laid out at the beginning of the game, meaning that players can effectively self regulate the difficulty level that they want to play at. Personally, I’ve been most amused by playing as a low-end team that has some budget, as that allowed me to explore some of the upgrades that the game features whilst also forcing me to test a wide variety of strategies and to blood up and coming drivers. 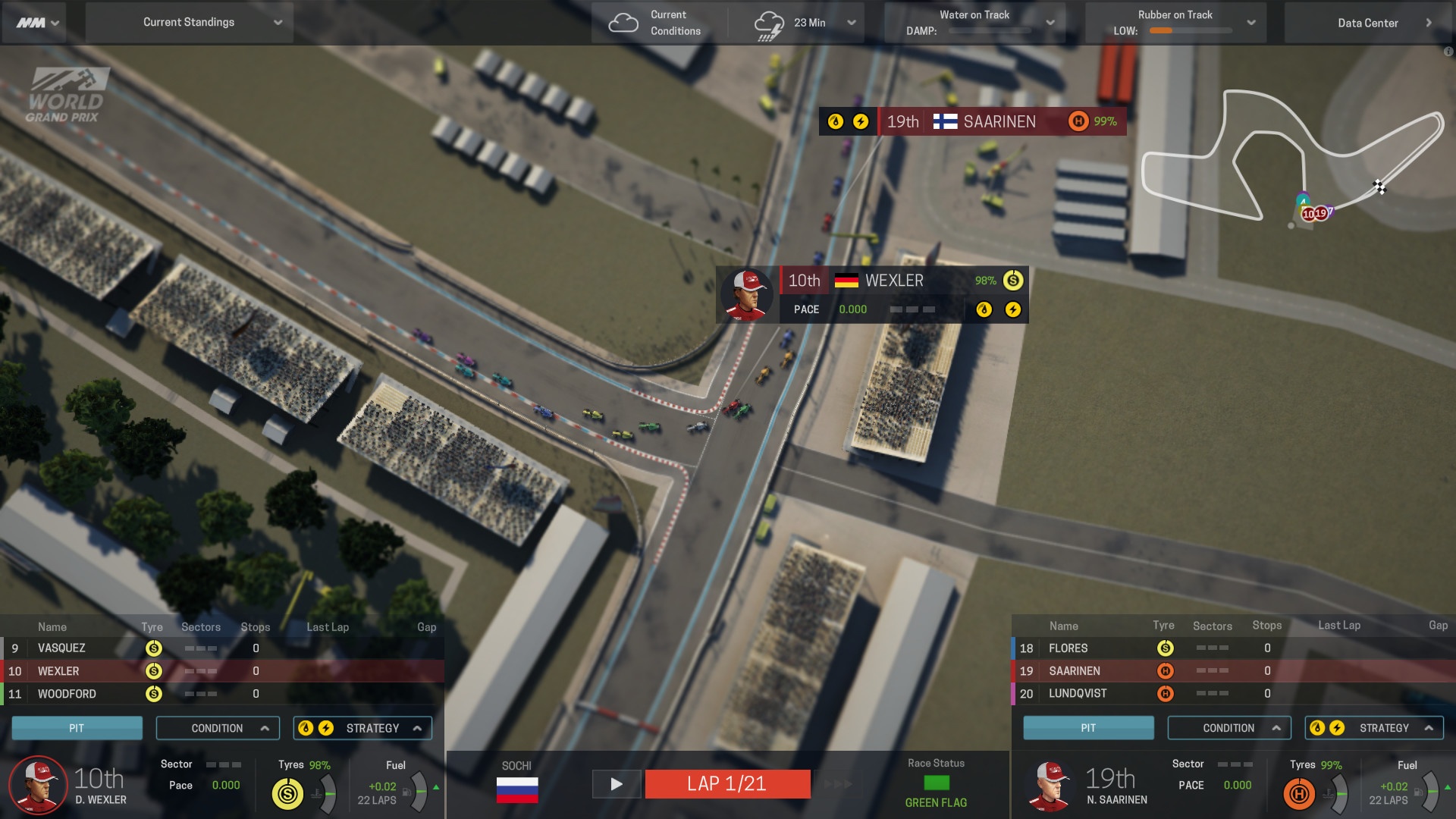 Perhaps unsurprisingly, Motorsport Manager really comes into its own when the event begins. A practice session begins each race weekend (in some events qualifying will follow, but not in all) and the player is able to actively adjust the car setup based on driver feedback to ensure the best balance given the car, driver and track conditions. The tweaks made in this part of the game are unique and useful, and in turn the practice session (which you might otherwise be tempted to simply ignore) suddenly becomes all the more interesting and important, which I am delighted about.

Whether in practice, qualifying or when racing proper, the Motorsport Manager interface is just as pleasing as it is elsewhere. Players have access to all the necessary data on-screen at the same time, and can adjust driver behaviours and provide team orders on the fly. Pit instructions do take a few races to become familiar with, but they soon become second nature. The graphics during races look fantastic, with a suitable level of detail that is presented with total clarity. It won’t be long before you begin to understand the nuances of each driver and how it affects their performance, and you’ll soon notice rivalries begin to form between them and their closest opponents in the championship.

Motorsport Manager is a superb representation of managing a motorsport team (at least to the extent that I will ever know) and I expect I’ll be playing it for some time to come. The game crams tons and tons of mid to low-level detail into an accessible, attractive package that should be attractive to casual motorsport fans as well as those who consider themselves to be more serious. There is a real human element to managing the team and pushing it to the highest level of success, and there is a genuine feeling of satisfaction for achieving even the smallest milestone, whether it be placing your unfancied driver in the top six, or winning the championship with the richest, most demanding team.