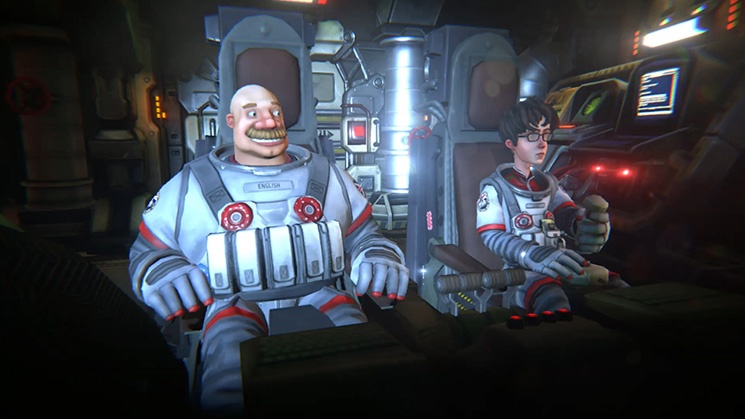 Oh, point and click adventures. You have no plans to ever retire, do you? You see the steadfast nature of game genres that shouldn’t work on consoles but do, and you think “me too, dammit.” And so we see the PnC workhorse continue to evolve, steadfastly holding onto what it once was while trying to acclimate to something bold and new. Sometimes the games come across in ways that seem unique and original, trying to lasso a brand new type of fan and game, reaching brave new heights and nearly separating from the foundation of the game entirely. Others are entirely referential, using the paths that other successes trod (typically LucasArts titles) in order to walk the walk and pick up existing fans along the way. Thankfully, there are some games that bridge the two areas, nodding to their predecessors while also taking their own time to make something new. So we salute the efforts and actions that went into Her Majesty’s SPIFFING, for they are mighty and pretty damn good.

Her Majesty’s SPIFFING is a very recent title in that it’s both new and uses framing that only goes back as far as summer of 2016. The Queen, having become entirely fed up with the way the United Kingdom was going, decided to dissolve Parliament and entirely take the rule of England and its empire back under her thumb. Bully for the Queen, I wouldn’t be totally upset if something like that truly happened. So, after improving the quality of life down on Earth, Her Majesty decides that the British Empire needs to return to greatness and, since she can no longer discover new places here on land, it’s time to take to space. Thus the HMSS Imperialise was launched, with the good Captain English at the helm and his faithful second, Aled, also at the helm but in a slightly smaller and less important chair. Together, the two set out to find new worlds and civilizations and help them understand the importance of joining in with their new Galactic British Empire. Naturally, our two heroes will soon discover they are far from the only beings who’ve set out to conquer the cosmos, but hilarity and incredulity, not horror and murder, await. This isn’t an Aliens movie, it’s more Spaceballs than anything else, and even that’s a bit of a stretch. 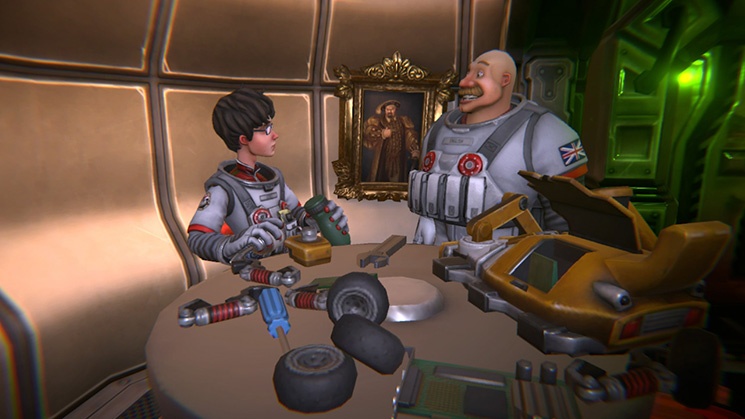 Let’s get the elephant out of the way right away. There’s no mouse and keyboard support for the Switch yet, so you gotta do everything with a controller, and I emphasize controller because the team of Billy Goat Entertainment opted not to have touch screen controls. A sincerely bold move for a point and click adventure game, but not a fatal or even illogical one. You see, far from the olden days of needing to click on every damn thing and praying to God that this pixel is the one that moves the story along (thanks a ton, Loom), you very clearly have the items that you want to interact with highlighted with a floating “A” every time you approach them. The game doesn’t totally hold your hand: you then still need to decide if you’re going to examine it, use it, talk to it or try to interact with it and the item you’re currently holding. There’s plenty of situations where you can poke at something over and over with no results, but simply getting something in hand before commencing the poking will lead to profit. I tried to force batteries into a controller before picking said batteries up, and Captain English admonished me, saying I had no idea if the batteries were the right type. It’s a bit cheeky in making sure you play in the confines of “the rules,” but that gives the game spark and personality.

And oh, the personality of it all. The game is incredibly self-aware, continually making references and entendres that suggest they know the game is happening and they’re just characters, but they never come straight out and say it a la Sam and Max. Instead, we’re treated to plenty of fantastic and witty banter between everyone we encounter, but most of it comes from English himself, who does a phenomenal job of playing a slightly jockular straight man in the situations. Aled is dry and Welsh as they come, punctuating every sentence with a “boyo” and comes across as, frankly, very content in his position as the sidekick in all of this. And it’s a damn good thing that the two have chemistry as well: the number of other persons, animals or objects that talk back to English are, well, only Aled, and, all spoilers aside, one very brief conversation with some other beings. By developing a great dynamic between two folk and having the Captain himself be affable and friendly, the whole game can carry itself through on charm alone.

But there’s also graphics. Ohhhh, the graphics. I absolutely adore how good Her Majesty’s SPIFFING looks, and that’s with total honesty and brutality. Bringing a PnC into 3D is a tough job in any case, because there is so much more to see and do, but I think experimenting with putting everyone in a tight space like the HMSS Imperialise was a smart choice. You effectively limit the number of draw environments to work with so you can focus on making everything else look amazing, and it does. The sheer volume of the Captain’s moustache alone is wonderful, and there’s this incredible balance that makes the ship simultaneously look futuristic but also very homely (in a home sort of way, not a dilapidated sense). You really get the sense that this has been the home for these two lads for the past however long, they’ve made the best of it, and, yes, they’re getting a bit space mad and claustrophobic, but, hey, that’s life out in space! The animation is spot on in capturing the real feeling of who these guys are and where they’re headed, and it’s a visual treat to watch Captain English flop down on a very uncomfortable sofa or work his legs off on the ship’s exercise bike. I’m being totally serious, this game is wonderful to behold. 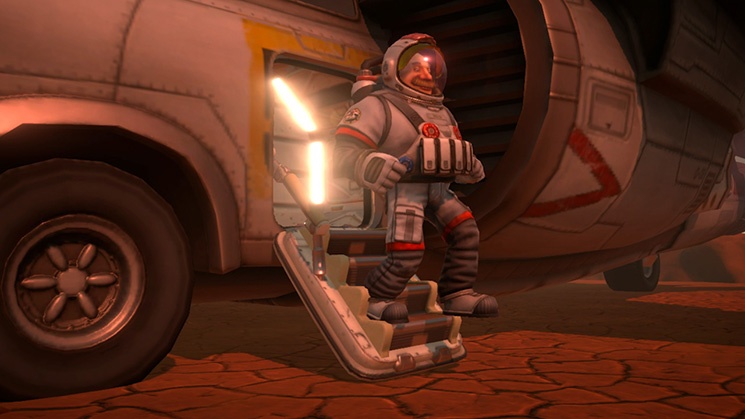 The biggest, biggest rub against Her Majesty’s SPIFFING is the length of the gameplay. It’s very clear that another chapter or six is in the future for our heroes, and this first entry is little more than a proving ground that the concept works, the characters function well and there will be more in the future. As a result, the whole experience, from start to finish, is well under two hours. You just really feel like you’re getting into the universe and where things are headed when it screeches to a halt. Now, you’ve got no choice but to go back and maybe see if you can get a few more of those achievements that are peppered throughout the game (which, thank you so much for putting those in even without Nintendo having an achievement system). There’s always choices you can make to have new dialogue trees, or experiment with different things to get new reactions, but there’s only one ending and one path to follow, so fans looking for a longer investment will be, in a word, disappointed.

But don’t let the amount of time fool you or put you off: Her Majesty’s SPIFFING is a treat unto itself, and well worth the price of admission for fans of humor and adventure. If you want or need some great British humour and are ready to brave the cold, mildly unpleasant reaches of space, then, for Queen and Country, get ready to boldly go where a few people have been before! I mean, technically speaking.