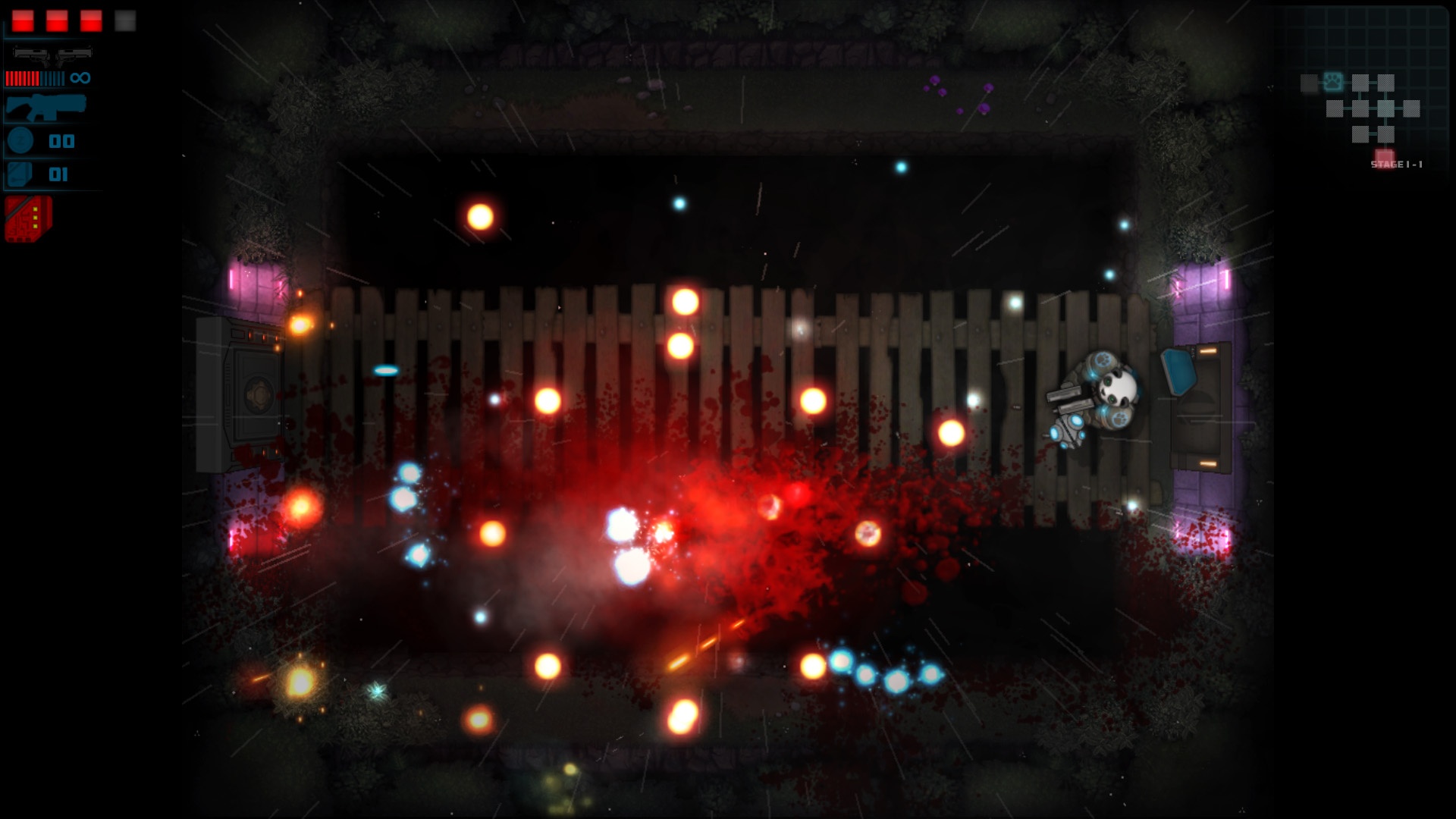 Theres a story here somewhere, but I don’t think it matters very much. What matters is that you are a panda. A panda-soldier. Everything is trying to kill you, and you have to escape. You run from room to room, killing everything in sight until a red key drops, make your way to the exit and onto the next stage. Take too many hits and you die. Back to start you go. But while meeting the reaper will ultimately end your run, along the way you have a chance to collect some blue orbs, which can be used to upgrade your panda with things to make life easier next time. It’s a simplistic format, but it works.

Part of what makes Feral Fury enjoyable is just how solid it feels to play. It’s a twin-stick shooter, so firing is as simple as pointing the right analogue stick in the direction you want to blast. Your panda comes equipped with some dynamite which is placed with L1, can combat roll by pressing X, and can use a power up (if you are lucky enough to find one) by pressing circle. Destroying crates and boxes often yields helpful loot and enemies explode in a shower of gore, drenching the floors of each room in blood and marking your progress in a visceral yet satisfying way. 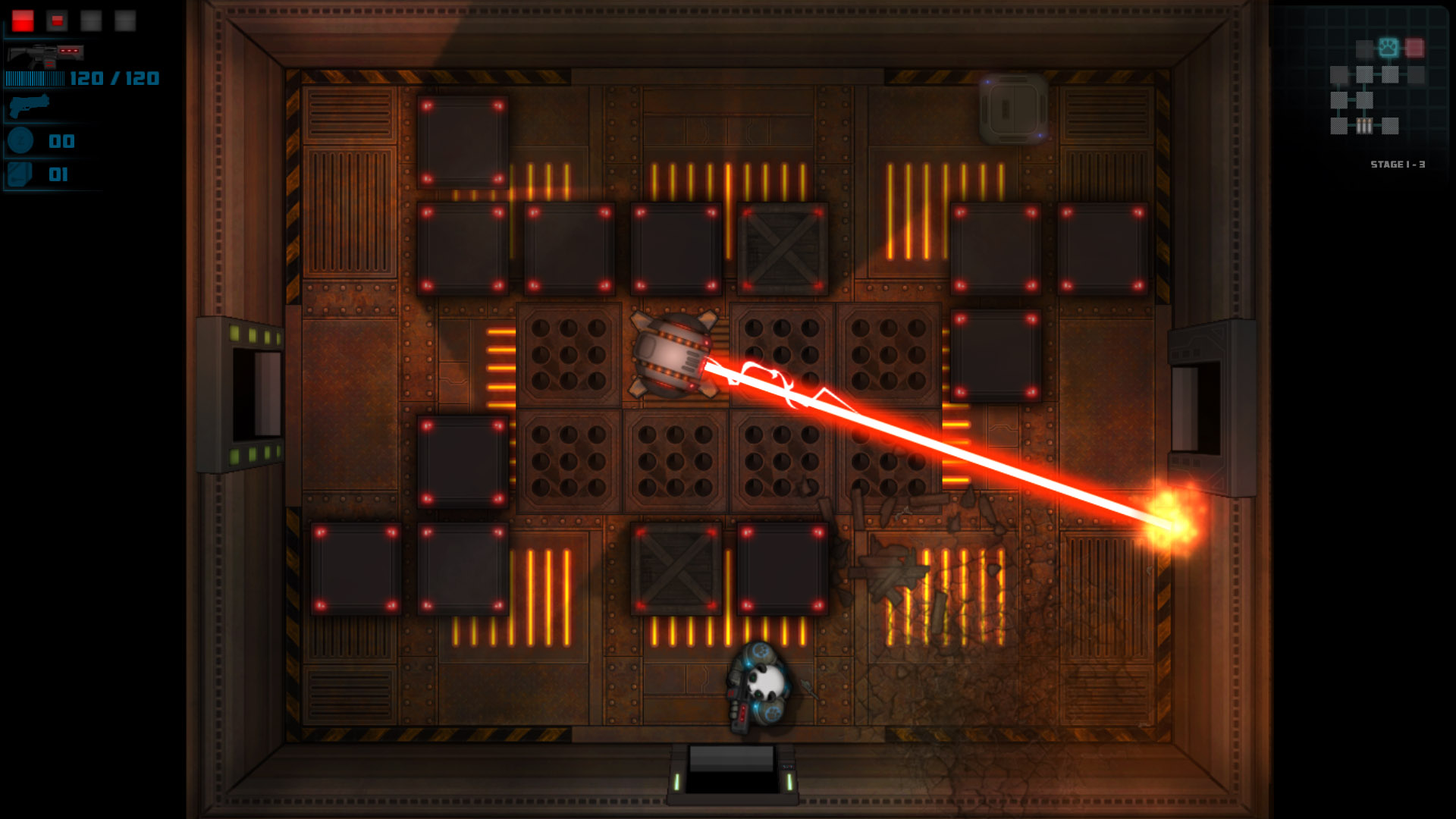 The rogue-lite aspects of the game are handled in a very arcade-like manner. You’ll upgrade stats such as critical hit chance and movement speed, but never get bogged down in an RPG style swamp of numbers. Rooms and enemies are procedurally generated in a balanced way, so you’ll only ever die from your own actions rather than unbearably unfair level generation. The power-ups and weapons available are substantial and numerous, altering the gameplay in small but meaningful ways. I came across helmets that would provide infinite ammo, summon wasps from the enemies of corpses, transform the combat roll into a combat teleport, as well as the usual health and speed buffing variety. Weapons range from the expected pistols and assault rifles to flamethrowers and plasma launchers, each one feeling adequately meaty to fire and often requiring a small change in the way you approach a room. Theres a lot going pick-up wise, and the huge number of items available mean you’ll be playing for a long time before you see them all.

Theres also a surprising amount of exploration available, if you want it. It took me at least two hours of playing to realise that there were secret rooms hidden behind some of the walls and that the dynamite had a use beside fragging your foes. Some of the upgrade items you can buy before each run hint at a method for unlocking some sort of secret, but I’m yet to find out exactly what it is or how to do it. Some maps have rooms dedicated to shops where you can purchase an upgrade or two to use in the run if you have the coin, or you can just open fire upon and take their stuff by force. There are lots of little features that aren’t explicitly explained anywhere, rewarding those who try new things and think outside the box a little. 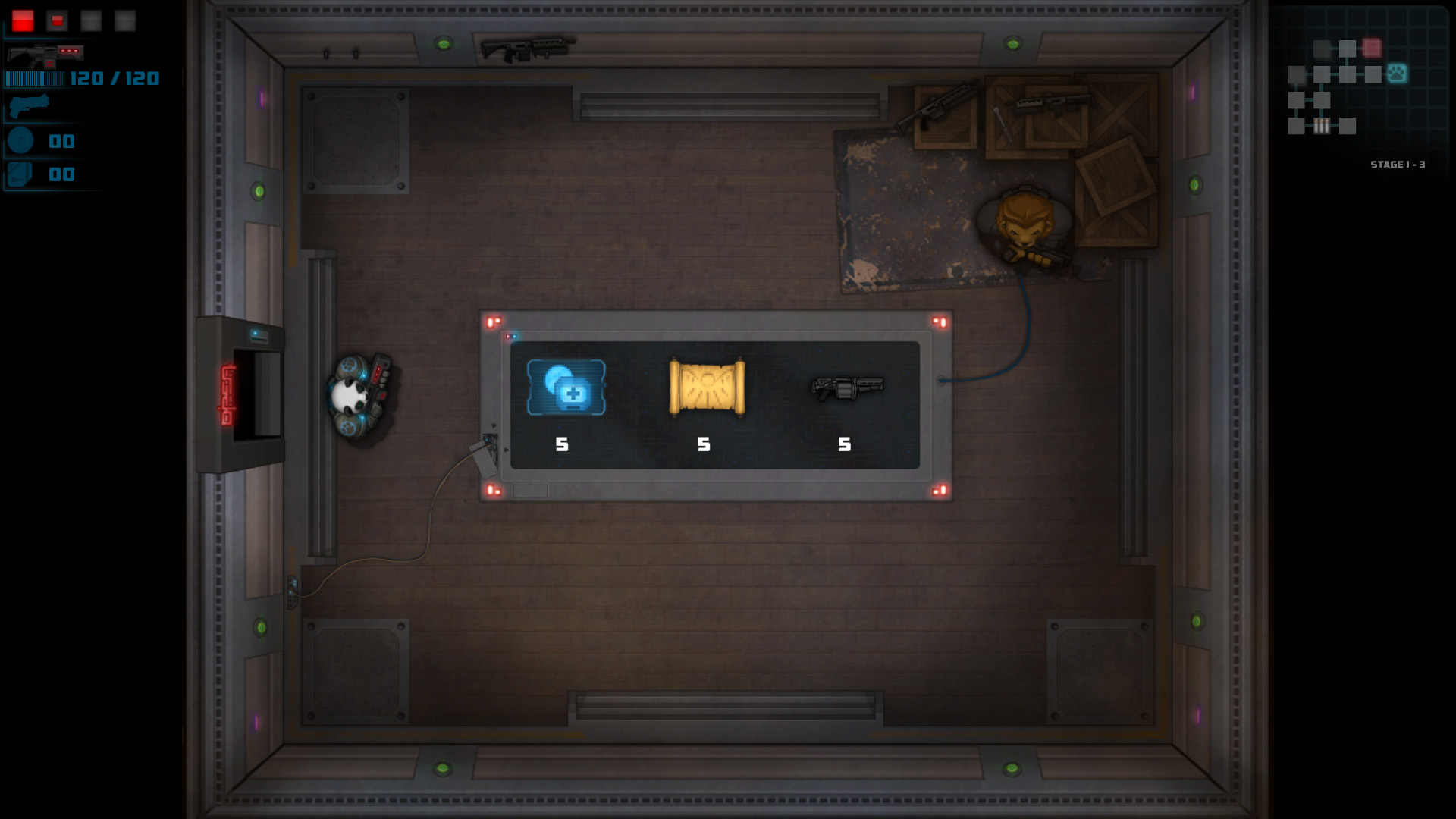 Visually, everything is presented rather nicely. The character models all look chunky and solid, projectiles and explosions are animated in a simple but effective way and the rooms within the maps follow a similar theme without becoming boring or repetitive. I experienced a couple of minor glitches here and there, but nothing that broke the game or interrupted the flow of combat in a major way. The sound design was also handled well, Feral Fury has a soundtrack that was atmospheric yet unobtrusive and the weapons all sound suitably dangerous to wield. All in all the whole game is presented very well. The only real gripe I have is the bosses. Compared to the rest of the game, they were just too easy. Sure, they looked menacing enough, but none of the ones I saw were much of a challenge. That being said, during my time playing I only ever made it to the third ‘zone’, so meaner guys could be out there in the later levels. Or maybe not.

I’d recommend this game to pretty much anyone, as its simple arcade style make it accessible to most gamers. Running and gunning like a lunatic is certainly a viable option, yet mastering the basic combat roll will keep the savvy alive for longer. The sheer number of power-ups available mean that no two runs are the same, and extra characters are available to be unlocked for completing the game on normal and hard difficulties. Feral Fury also includes a daily challenge mode. This sees you competing for a high score against the rest of the world using three randomly assigned items as well as a random curse to hinder you. But if you are anything like me, you’ll be too interested in actually beating the game before you try your hand there. That, and figuring out what that damn talisman item I bought for a thousand orbs actually does. A great game that had me going back for ‘one more go’ again and again.