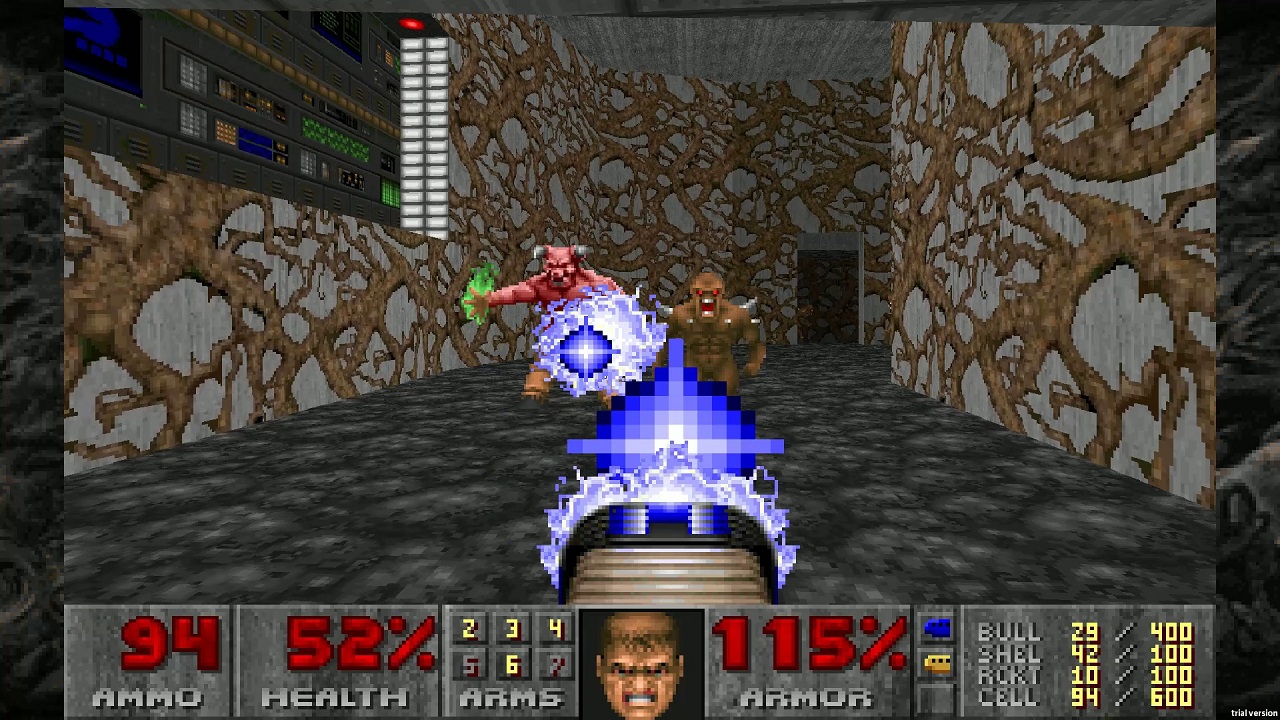 When Bethesda quietly and abruptly decided to release the original Dooms onto the Switch, this was a moment of instant, brainless, almost reflexive downloading. For every game that I’ve played since I got into the world of electronic distractions, only the moustached plumber who seems to be able to do anything has meant more to me than Doom. And it’s not because of the crazy amounts of controversy, or the pearl-clutching that every parent responded with, or even the fact that it definitely made me worship Satan and sacrifice animals and play D&D with my friends. It was the label finally being ripped off of the world of video games for my generation, for the Nintendo kids and younger PC gamers being shown that there was a game that was, in no way, for them, and that was alright. Sure, plenty of younger people still passed around shareware disks in secret (or downloaded off of BBS’ in hours-long dialup sessions), but this was a game meant to capture the more mature attention, and showed that, no matter what my mother insisted, video games weren’t just for children. We can never thank id Software enough for what they did, but we can still keep the dream alive by revisiting their games.

If you’re honestly unaware (and some of you may be), Doom is about a space marine in the far distant year of 2019 (yea, it wasn’t a coincidence they got released this year) who is stationed on Mars. Everything is going just great (or as great as it can be) with scientists experimenting with portals and stuff, until, in 2022, there’s a “mishap” and the scientists accidentally open a portal to Hell and free all the demons inside. Evil spirits possess other marines, actual demonic beings walk around, and you gotta shoot them all. Our dude (often called Doomguy), has to blast his way literally to Hell and back, with no other reason or purpose than “I’d prefer not to be eaten by demons.”

While not the first First Person Shooter on the block (that accolade is often attributed to id Software’s first baby, Wolfenstein 3D), Doom is one of the most significant in terms of cultural impact. Not only was there plenty of blood and gore to be seen, it had several core elements that made for great future projects and a lasting legacy. Deathmatch mode, or the ability to go head-to-head with several other people via network play, made sure that it became instantly popular amongst the modem crowd, and the WAD style customization packs lead to the first serious case of player-made maps and game modes, some of which live in infamy to this very day.  Also, it carried a lot of great ideas that were already present in Wolfenstein 3D, like finding keys in order to move onto the next area, various levels of NPC intensity to make the game easier or harder, and the satisfaction of blasting the living hell out of anything that moved that wasn’t you. To be perfectly frank, there were several death animations and ideas that could be interpreted as truly grotesque, but they were only mildly more upsetting than the death of Robo Hitler in Wolfenstein. 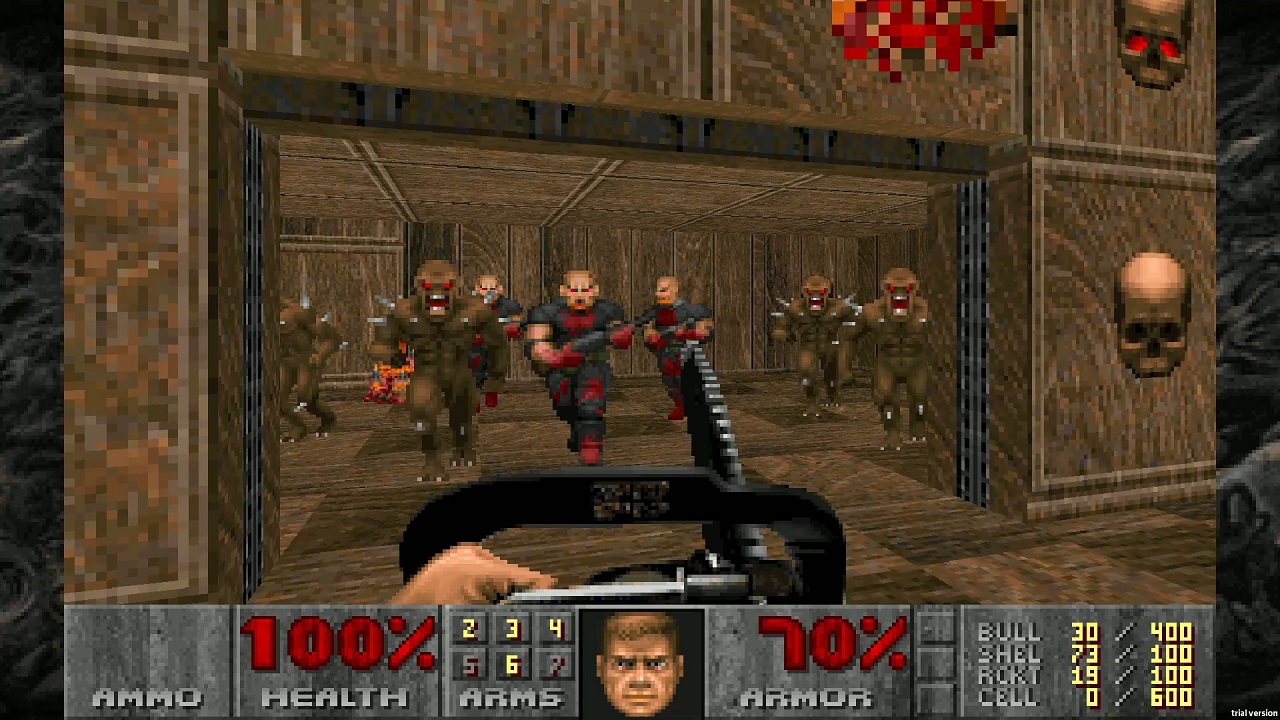 No, Doom’s biggest draw was the level designs and landscape that created some creepy, foreboding and evil visages across space and dimensions. While comparatively tame with today’s level of upsetting footage and ideology, Doom still creates a very good atmosphere in terms of the shambling imps, floating Cacodemons, angry pink demons and the monstrous final boss, the Spiderdemon. Watching the game transition from the cool, sanitized aesthetic of the space station to the bleeding, twisted walls of Hell itself is a trip unto itself, and the whole experience is complimented by a heavy metal soundtrack that’s punctuated with shotgun blasts, explosions, screams and otherworldly wails. For a child of the 90s, this was a fantastic and gripping game, somewhere between terrifying and enthralling, and the ability to simply hand it over to a friend via a few floppy disks and then jam up the phone lines of TWO houses so you could shoot each other in the dead of night was great, ghoulish fun, and that’ll be the primary draw of those who seek to play these games now: nostalgia chasers and historians who want to see a piece of the FPS history themselves.

But what about by today’s standards? Well, Doom, as a true and clean port of the original via Unity, maintains all the pluses and minuses of this more than 25 year old game. On the one hand, it removes a lot of the extra ideas and identity that’ve come with modern FPS titles, instead boiling things down to simply “shoot and stay alive.” You collect health kits and potions as you find them, keep your armor and your ammo up, shoot until they stop moving and rarely consider retreat to be an option, as it means turning your back on an enemy that will murder you and your health does NOT automatically regenerate. Doom is where the popular idea of “circle strafing” became the most effective tactic depending on the area, letting the player literally run circles around an enemy and blasting them, praying that another monster wasn’t going to be right around the corner to screw up your flow.  There are plenty of hidden panels and areas, and you even get graded per level about how many secrets you found, and these secrets can be a bit of a game changer, like finding the fabled chainsaw (such a better melee weapon) or even maxing out your armor right before a maelstrom of baddies greets you. It’s fun and mindless, in that sense, and that still holds true.

On the other hand, Doom also suffers from some of the limitations at that time. There isn’t any real aiming other than facing where the monster will be and hoping that you auto lock onto your target if it’s not directly in front of you. An early example is when an imp is on a ledge that’s clearly “above” where you can aim, and you need to be in the general vicinity in order to successfully shoot him off his perch. This isn’t as big of an issue in early stages, but once you cross into other episodes or use higher difficulty rankings it becomes a serious thing to consider. You don’t want to get eaten because you were a bit off of a target and hit someone who was less of a threat than the Baron of Hell that’s about to stomp you into a red puddle. Also, the buttons are okay with Joycon controls, but many players will feel them clunky in comparison to the original keyboard layout that so many hold in fond regard. However, that does not, in any way, make it impossible to enjoy the game. 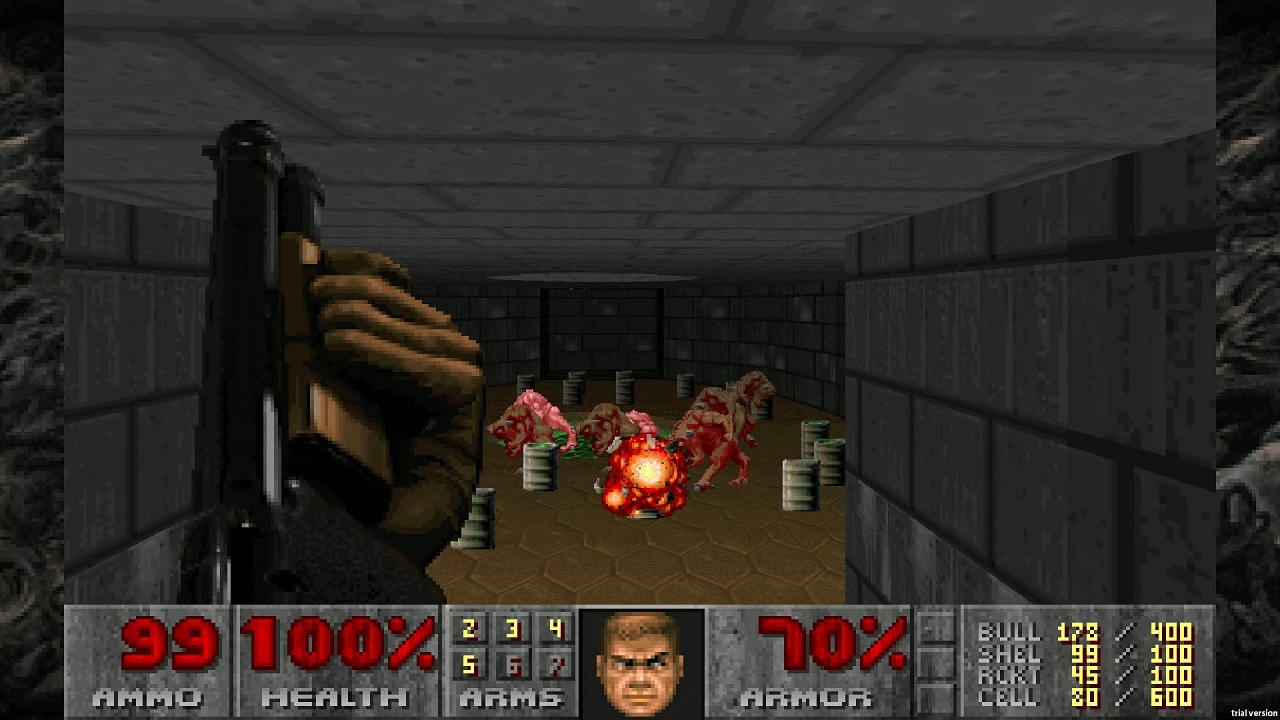 Players might also be miffed that this version of Doom does contain Thy Flesh Consumed, but there’s no immediate way to put custom WAD files in. This seems obvious, but that is something that players might take umbrage with, as the original creations of fans kept this early iteration of Doom alive far longer than many would remember. It’s important to remember, though, that a lot of the WADs that we enjoyed contained influence, design and images from other IPs that were probably less-than-thrilled their works were being shot at by teenagers across the country. I personally enjoyed many a night blowing up a certain purple dinosaur who was the bane of my existence and the joy of my younger sister’s life, so PBS probably wouldn’t be too keen on Nintendo letting people do that nowadays. Having said that, I’d love for General Mills to reach out and allow the original Chex Quest to show up, because that game was DOPE.

Honestly, for five bucks, there’s nothing better than getting a classic game like Doom onto your Switch and having immediate local multiplayer available on a modern system. Sure, there’s no online deathmatches, but we might see more of that in the future (probably not, but I personally prefer the solo venture anyways). And some people are angry about the Slayers Club thing, but I did it once and that was the end of it, and I had already made an account, so whatever. Doom is a serious and important game in the annals of history, and this is a steal to be able to revisit it, all these years later, running WELL, on the Nintendo Switch. The only thing that’s going to be better? Playing Doom II, which I am going to sink my teeth into IMMEDIATELY.

It’s Doom. I mean, I’ve said more than that, but it’s classic Doom on the Switch. How could you not?