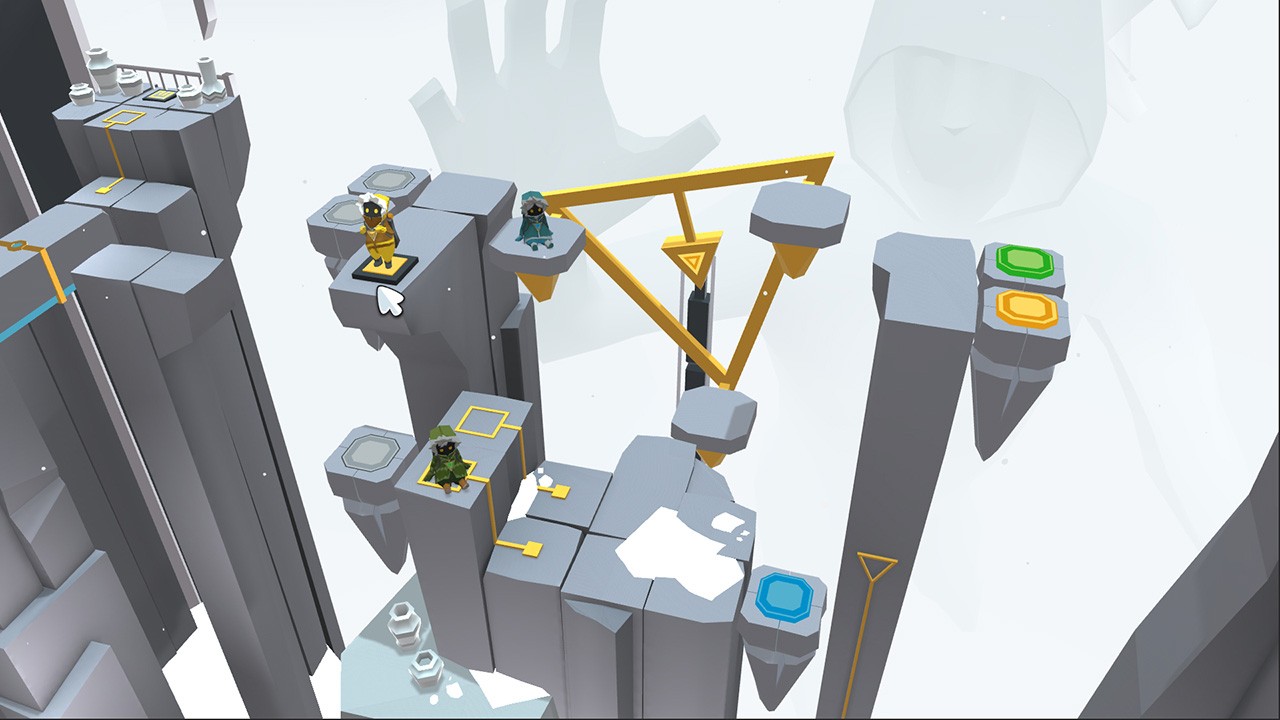 Path of Giants is Journey Bound Game’s first release on Nintendo switch and indeed game development. The team comprises of married couple, Hana and Andrew, who designed the game to share their love of the hobby with others. The title pits your wits against a variety of puzzles as you control three intrepid adventurers, Bern, Matchi and Totch, in their attempt to bring their amulets across a frozen wastes to uncover a lost treasure.

You play as three adventurers, who each hold a coloured amulet which, luckily, matches their outfit (I’m almost certain they planned their outfits before setting out!) These amulets also allow the explorers to control moving platforms and open doors among other things. You are able to control each character in turn by clicking them and then where you would like to position them. If that character can’t move there, they will defiantly shake their head at you. Your job is to position the explorers in various ways that enables them to cross ravines and unlock doors either by walking, boosting the other up, or in a variety of mechanisms designed to test your problem solving skills.  Once safely at the door there is a further task to complete which takes the form of a rotating tile game, make all the lights follow the same path and you move on. 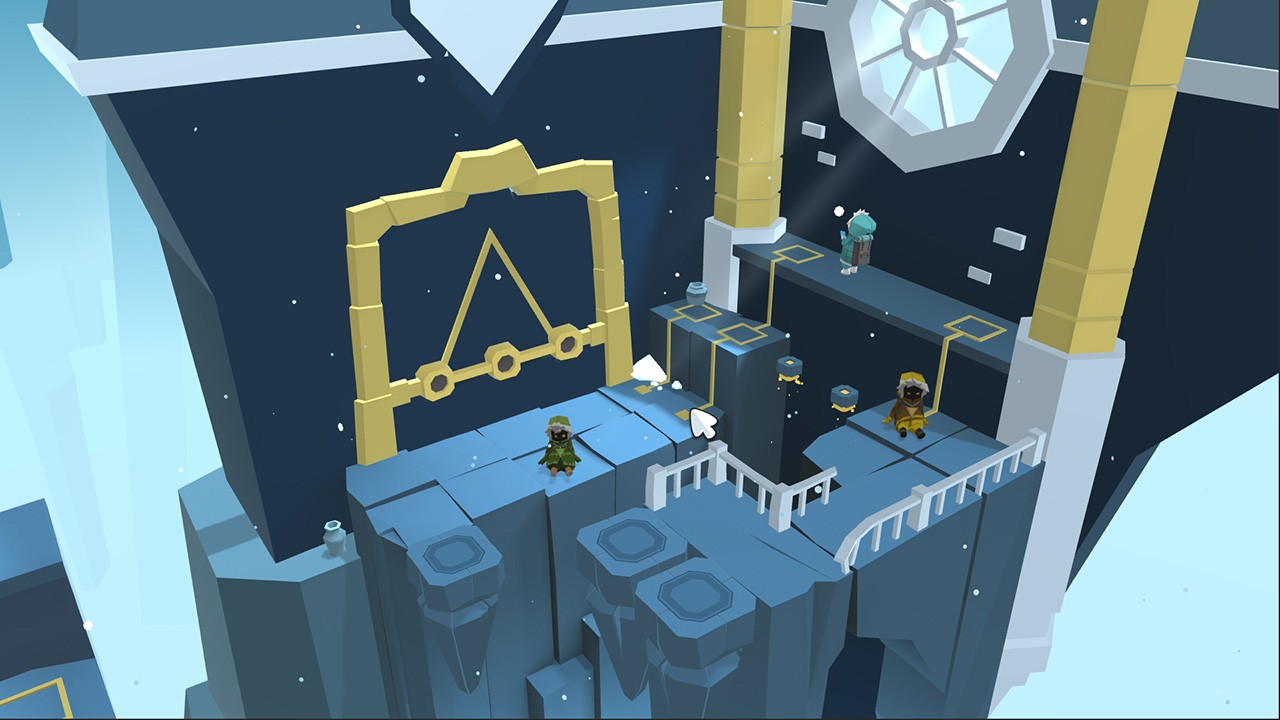 Controls are fairly simplistic here, you control a cursor with your left joycon stick, you select with A and repeat. When you have gotten the explorers to a door puzzle you can switch between tiles really intuitively and if you have ever made a mistake, you can simply press B to undo the last move. The complexity of the puzzles increases as you continue through the levels but rather than being frustrating, the game exudes an era of calm. There’s no rush to complete a puzzle, no timer to countdown or counter of number of moves. There are achievements to unlock but essentially the mood is “here’s a puzzle, when you’re ready we will have another one”. This type of game play makes Path of Giants the perfect entry level game for new gamers, but also anyone looking to take a step back from completing objectives or accumulating EXP.

The game is relatively short, but the sense of achievement with completing each puzzle spurs you to complete the next. The shortness of each level makes it an ideal title to drop in and out of, for example if playing on a lunch break, you don’t feel like you’re missing out by going into sleep mode but with it being a puzzle game, there is an issue with replay value. 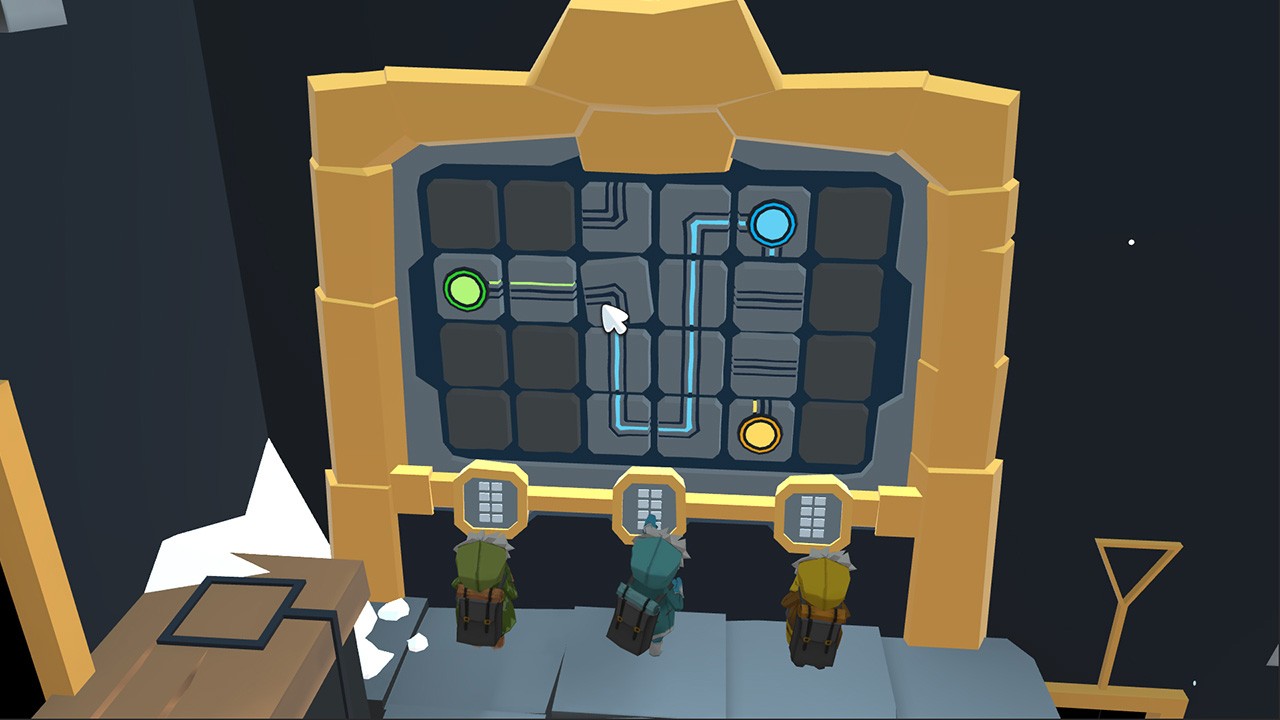 Graphically, the game is a very well designed with good use of tone and splashes of colour to help emphasise paths and goals. The characters are clearly designed, though they don’t show much individuality in game, though you can see some of this in the text based cut scenes. There is also the ability to change the colour palette for each of your explorers which is a nice touch for an element of customisation but was also designed with colour blindness in mind, making the game even more accessible. The accompanying soundtrack matches the tone of the game beautifully. The calm yet eerie undertones of Clark Aboud’s music creates an atmosphere without you having an irritating “ear worm” hours later, nor does it detract from the experience. There is little else in the sound department besides environmental noises and the odd sound from the characters, but again, nothing takes away from the experience as a whole.

Overall, Path of Giants is a fun little distraction. The puzzles aren’t massively difficult and there’s time to find the random pots around each level to help unlock achievements. The main downfalls come from its length and relative ease. The game can be completed in a couple of hours and would benefit from some kind of longevity being breathed into it along the way. But considering it’s price on the Nintendo eShop, its certainly not a criticism that holds well. I enjoyed dipping in and out of this title during my time with it, completing the odd puzzle before falling asleep was a particular favourite and really easy to get into the routine of. For fans of puzzle games, this is a bargain.

Path of Giants is a simple, but well thought out addition to the puzzle game genre. With simple, but challenging tasks that rely on teamwork and considered positions with a calm environmental soundtrack the game’s only real flaw is it’s quick playthrough and short length.