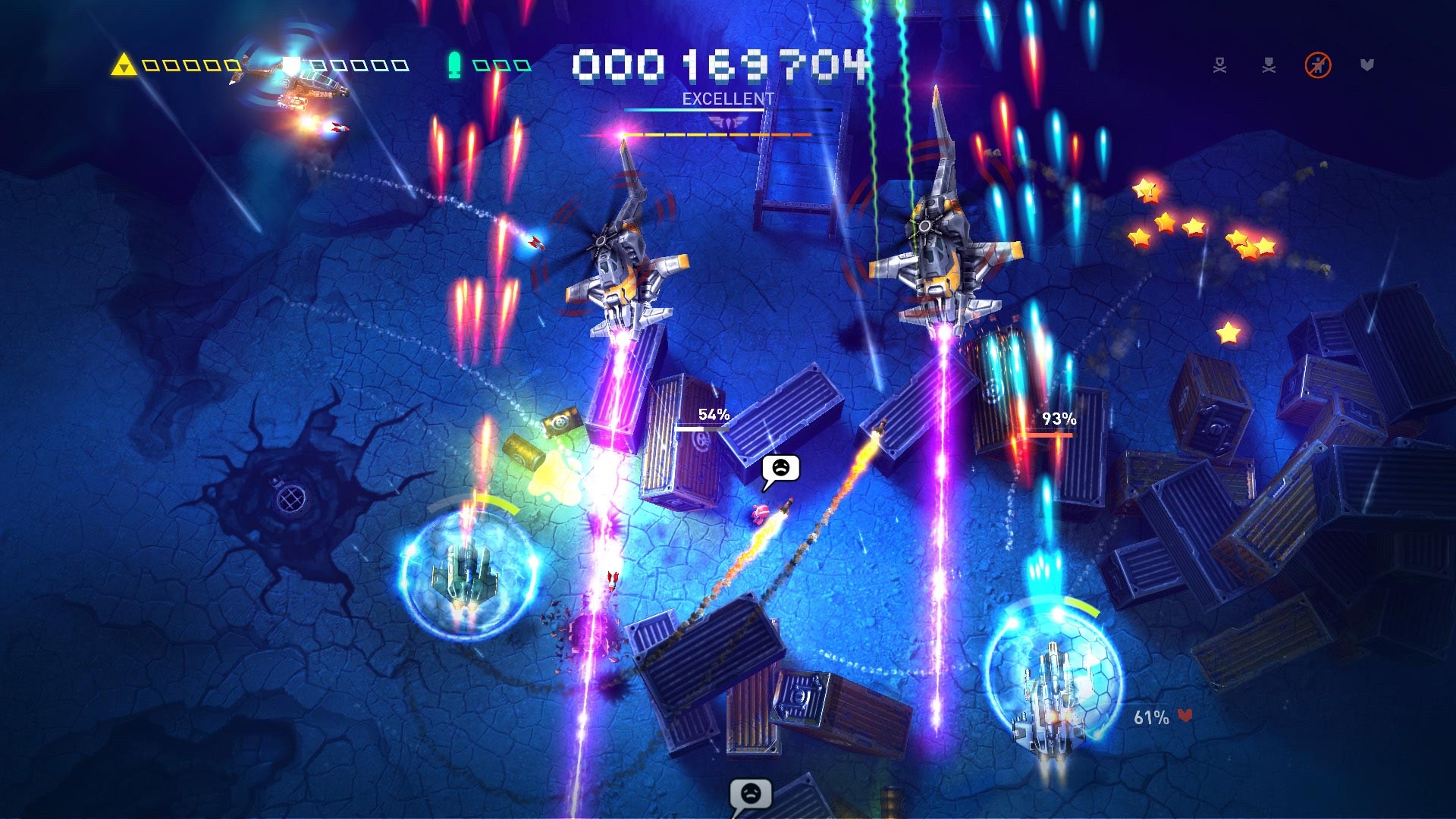 Sky Force: Reloaded is a vertical scrolling arcade-shooter, released on the Nintendo E-shop 1st February 2018, following its release on various other platforms such as Play-Station 4 and mobile. The game was developed by Infinite Dreams, and is the successor to their previous title, Sky Force which was release in 2004. There is the option to play single player or multiplayer mode, as well as offering a tournament mode where you can compare yourself against other players by seeing who can obtain the highest score. This game holds everything I expect from the genre and upholds it to a great standard.

The plot of the game is very basic, holding the classic good guy must defeat the bad guy formula, not going much further than that. The game consists of thirteen levels, eight of which contain a boss fight at the end and the other five containing some other form of goal, such as collecting stars or avoiding enemy fire without the ability to use your weapons. The eight boss battles hold up well as they each demand you learn their firing patterns in order to take them down, which is easier said than done when they are firing three different types of projectile at you all at once. The voice acting for the characters that appear at the beginning and end of each stage are performed well, even though some of the dialogue for the villain boarders on cliché. 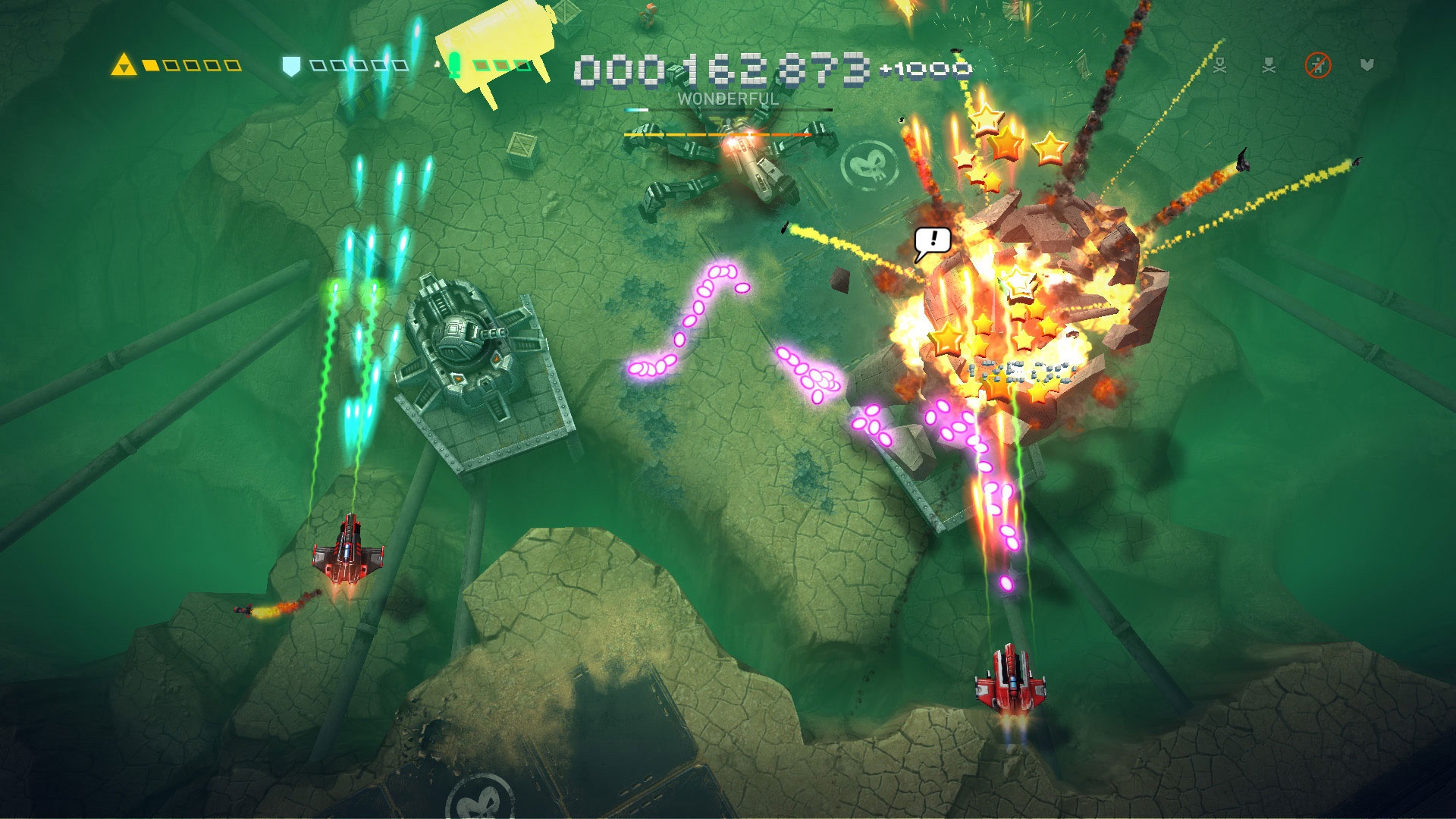 The game handles presentation very well, effectively using its 3D graphics. Each stage has enough variation in design to stop them all from blending together; however some levels feel a bit bland, such as level five which has the player flying over a desert with the only detail being some pipes coming out of the ground. The ship and enemy fighter models look very good, each model allowing you to determine what challenge is coming your way. For example, enemy planes don’t shoot any projectiles at you, however they do get in the way if you don’t shoot them down. Tanks however shoot a steady stream of projectiles for you to dodge. The red colouration of your own ship helps you stand out from the waves of enemies, however not always as sometimes it is easy to become lost amongst everything happening on-screen, which can be frustrating when you have no idea what to look out for next time. The music is fitting of the style you would expect of the genre, however also hold a modern tone to it, with the catchy rhythms encouraging me to play with the audio on, without getting bored and deciding to mute the game and turn on my own music instead. The sound design is also great, with the thud of my cannons taking out enemies being immensely satisfying, giving me the feeling of being an awesome fighter pilot.

The game-play itself also holds many merits. The progression system was effective and rewarding. At the beginning of the game you get a taster of the full power of your ship but then it is all stripped away for you to build up again, however this isn’t obtainable if you only play the game the bare minimum. This reflects the high replay value and incentive the game possesses, as you need to obtain a certain number of medals per level to progress in the game, with four medals per intensity on each level, a total of twelve each. You obtain these medals by accomplishing in mission tasks, such as avoiding being hit, or defeating 100% of enemies. You are also encouraged to replay levels so you can collect stars which you then use in the workshop to upgrade various aspects of your ship, everything from better health to stronger weapons. You can also use stars to buy stronger special weapons, such as the laser, and then buy ammo for them at the beginning of a level. You can also find ammo for these in level as sometimes they will be dropped by enemies. I’m still exploring more of what the game has to offer, such as the collectible cards within each level, which give temporary bonus’ and power-ups for a certain amount of time, such as maximum fire rate. 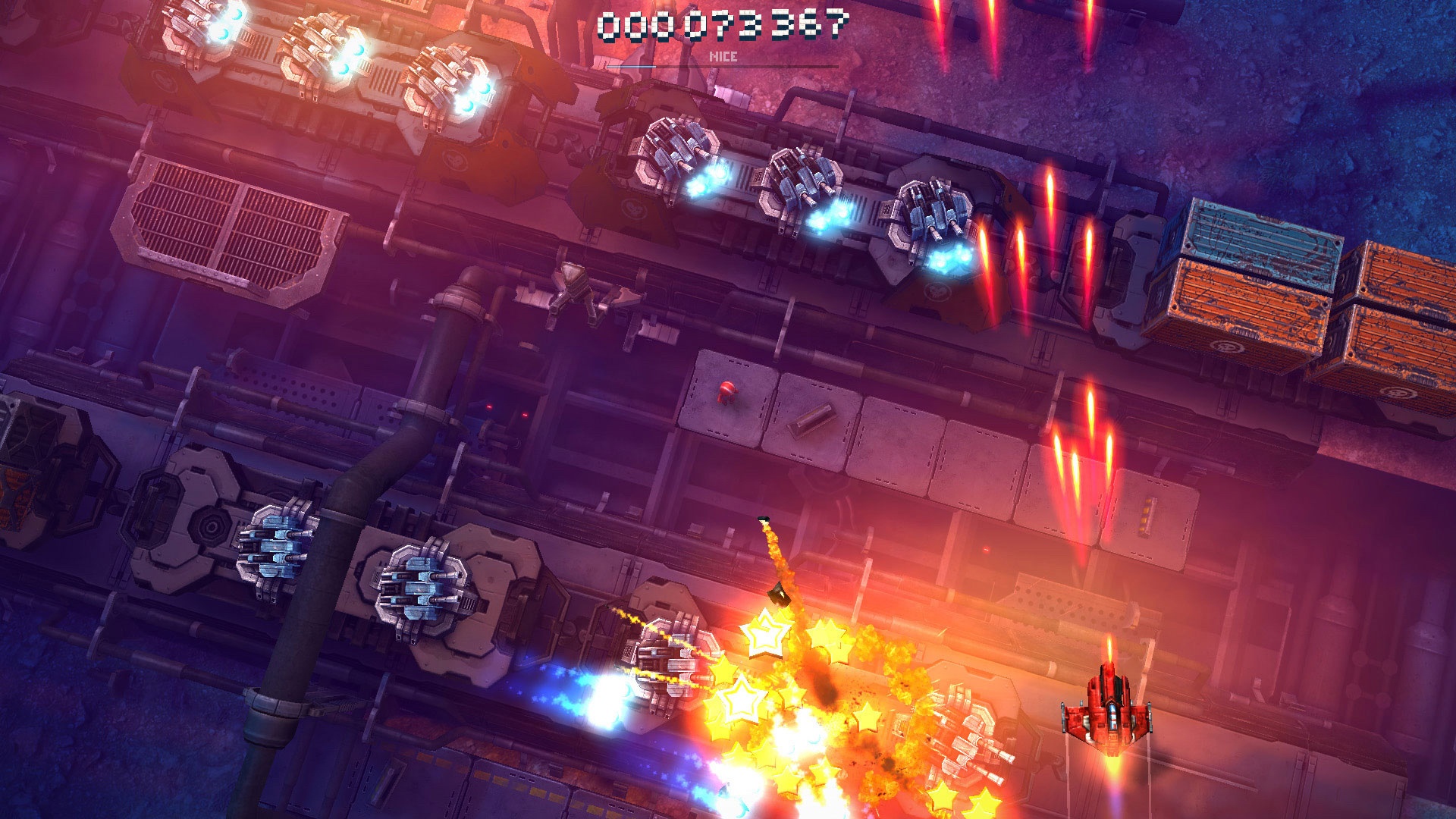 Some problems I have with the game are that the load screens for each level to a while, about ten to fifteen seconds. This was fine during casual play when travelling or winding down after a long day; however during an intense grinding session it soon became frustrating having to wait over and over again. Also access to ammo for the special weapons felt very limited, in some cases no tokens appearing for levels at a time, with only weapon upgrades for fire rate dropping constantly. However, I also understand that this adds a difficulty standard, and provided a challenge for me to overcome when I was struggling and didn’t have access to one of the better weapons.

Overall, this game was solid, with a good level of difficulty encouraging me to get better as I progressed. It also holds an excellent progression system and has a high replay value, which is an important quality for a game like this to hold. This is one game I’m going to be playing for a long time.