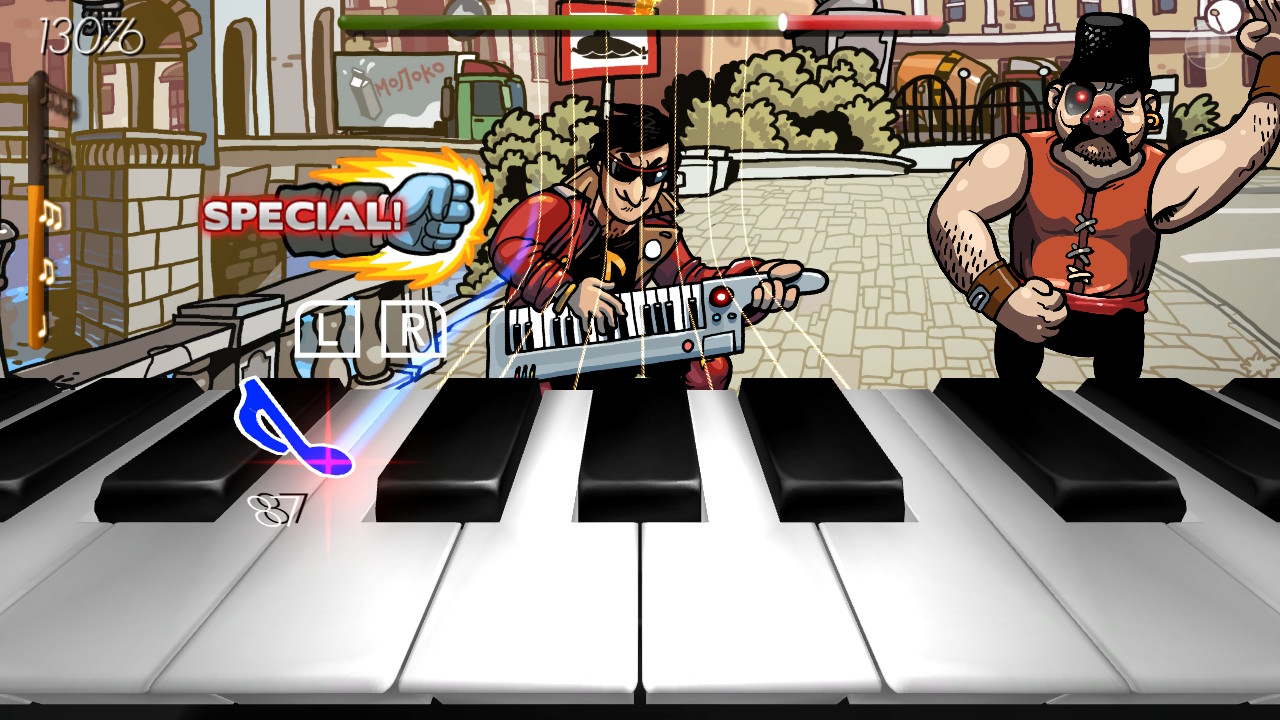 Frederick 2: Evil Strikes Back is the sequel to Forever Entertainment’s Frederic: Resurrection of Music. The game was released on the Nintendo E-Shop 1st February 2018, consisting of a story mode accompanied by a narrated comic. Unfortunately, this game suffers from many misgivings which hurts its potential in the long run.

The plot revolves around the resurrected polish composer Frederic Chopin, who engages on a hunt for his heart (the heart of music) whilst facing different musical opponents from various locations around the world, many of whom suffer from stereotypes based on where they are from. An example being the cockney English football fan, when Chopin visits Wembley stadium. Some of the other characters could even be seen as problematic in enforcing negative stereotypes of the nation they belong too. On top of this, the writing for the game seems very poor, with dialogue that doesn’t run smoothly, and lines that don’t make sense during confrontations. This isn’t helped by the poor voice acting present throughout. Chopin is the worst offender, suffering from an ironic tone deafness and general lack of enthusiasm when talking, even when his dialogue suggests otherwise. 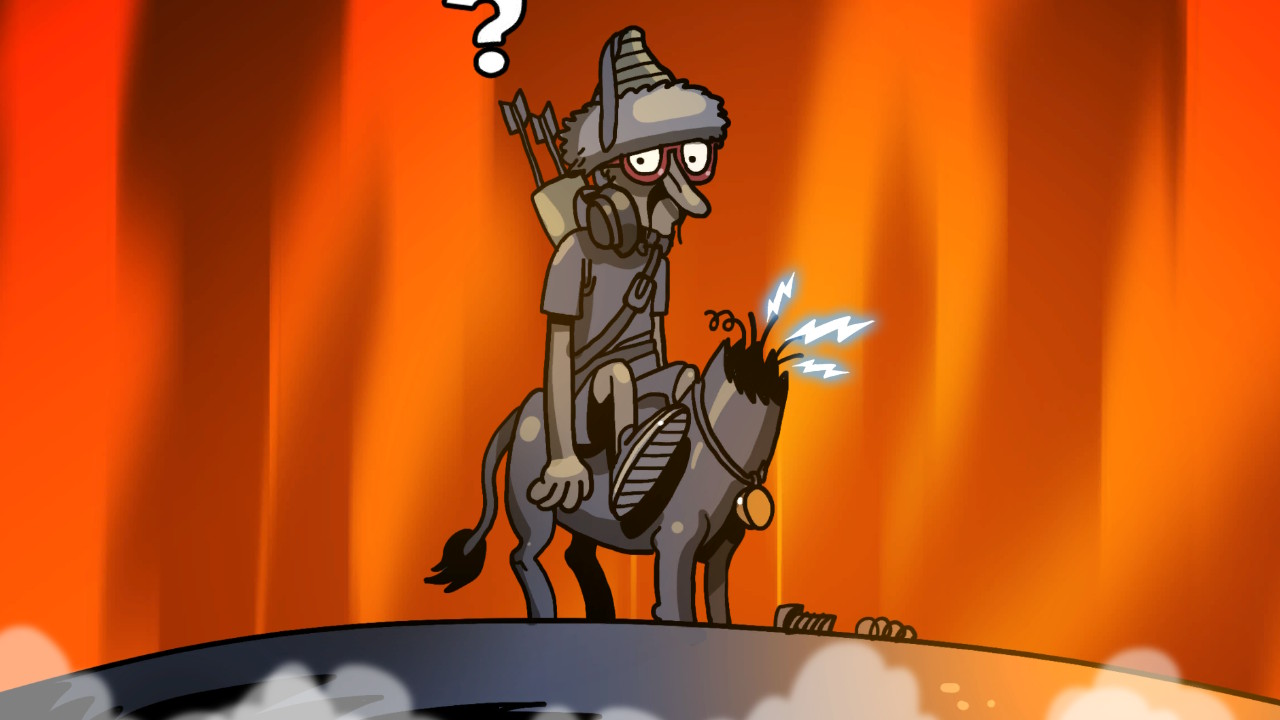 This is a shame considering the vibrant art style of the game, especially the comic sections which were all hand painted, a nice personal touch from the artists. The colours pop and the character designs are charming, my favourite being the villain before she sheds her masked costume for a more pop artist style get-up. The levels of the game also blend well with the art style, however the way the characters on stage move is very distracting, as they are just moving about and most of the time, not even to the beat of the song they are playing.

This leads to an important aspect of the game, the music. The soundtrack and music for the levels are based upon Chopin’s real life arrangements, with twists in genre depending on where in the world you find yourself. Sometimes, there are moments where there is very little happening in the song, so not much is happening on screen, however these moments provide a little rest from what can sometimes seem like an overwhelming onslaught of notes scrolling down the page towards you.  There are some tracks from the game which I absolutely have fallen in love with, my favourite being the music from the main menu, which is nice to relax to.

The game-play consists of seven lanes on screen which lead coloured notes down to a keyboard which you have to press when the notes pass it. If you time it well you will earn more points, meaning timing and a good sense of rhythm is key to success. You can play through two styles, the joy-cons or the touch screen. It’s nice to see a game which incorporates the potential the switch holds, however I would suggest using the later as when playing with the joy-cons I would often become confused during game-play, even when it seemed like I had learnt the controls. It was much simpler, and fun, to use the touch screen and emulate the piano, however if you prefer to use the joy-cons, there is the option to personalise key assignments in the main menu. There are four levels of difficulty for each stage, with the main increase lying in the timing of pressing the keys to maximise your score against your opponent. 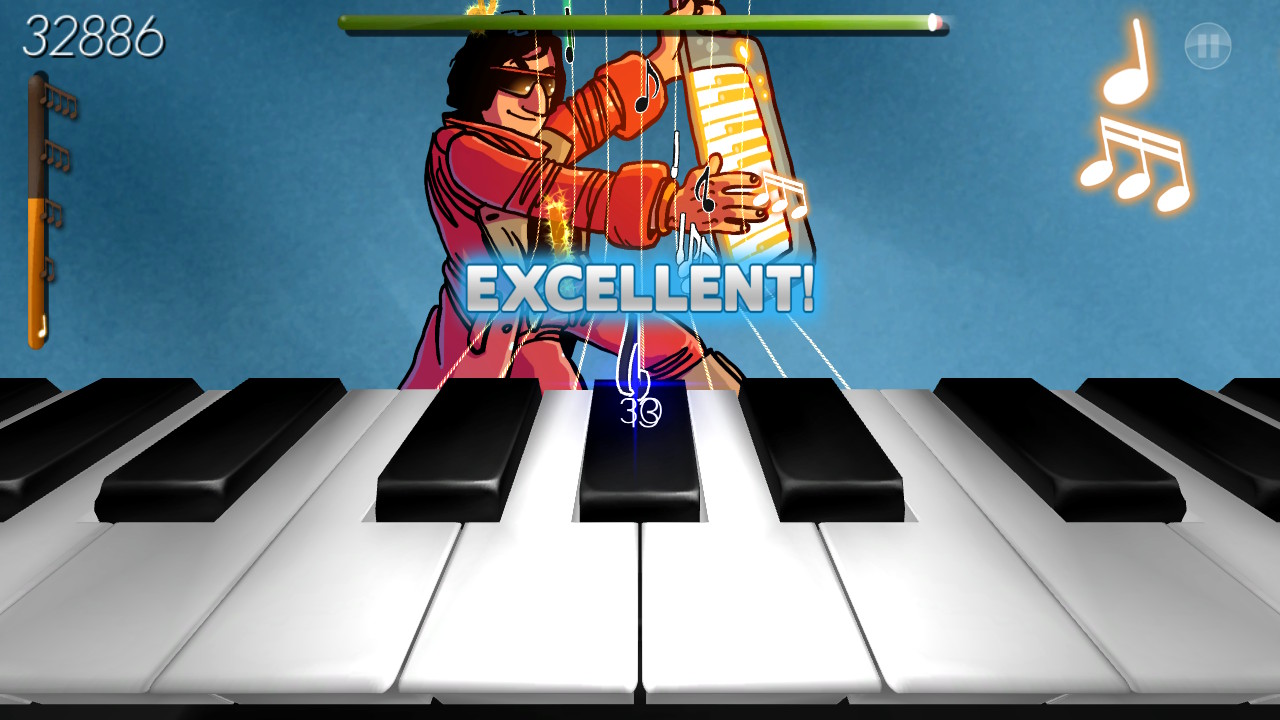 To improve the game, I would re-write the plot and the dialogue to be more cohesive, especially focusing of the points that seems shoehorned in, or those moments that didn’t seem to make sense. I would also encourage better voice acting, especially in the case of Chopin, who as the main character, shouldn’t sound bland and uninteresting. I would also add some bonus features or unlockable content to encourage replay of the levels through the increasing difficulties, even if it was just a costume change or unlocking then cut scenes, instead of them being handed to you as soon as you beat the game.

Overall, I praise the game for its soundtrack, which has variety and is worth listening too, as well as its colourful hand drawn comics. However the cheesy dialogue, confusing plot and frankly poor voice acting ruin the experience of what could have been a fun rhythm game giving me little incentive to play it further than I already have.