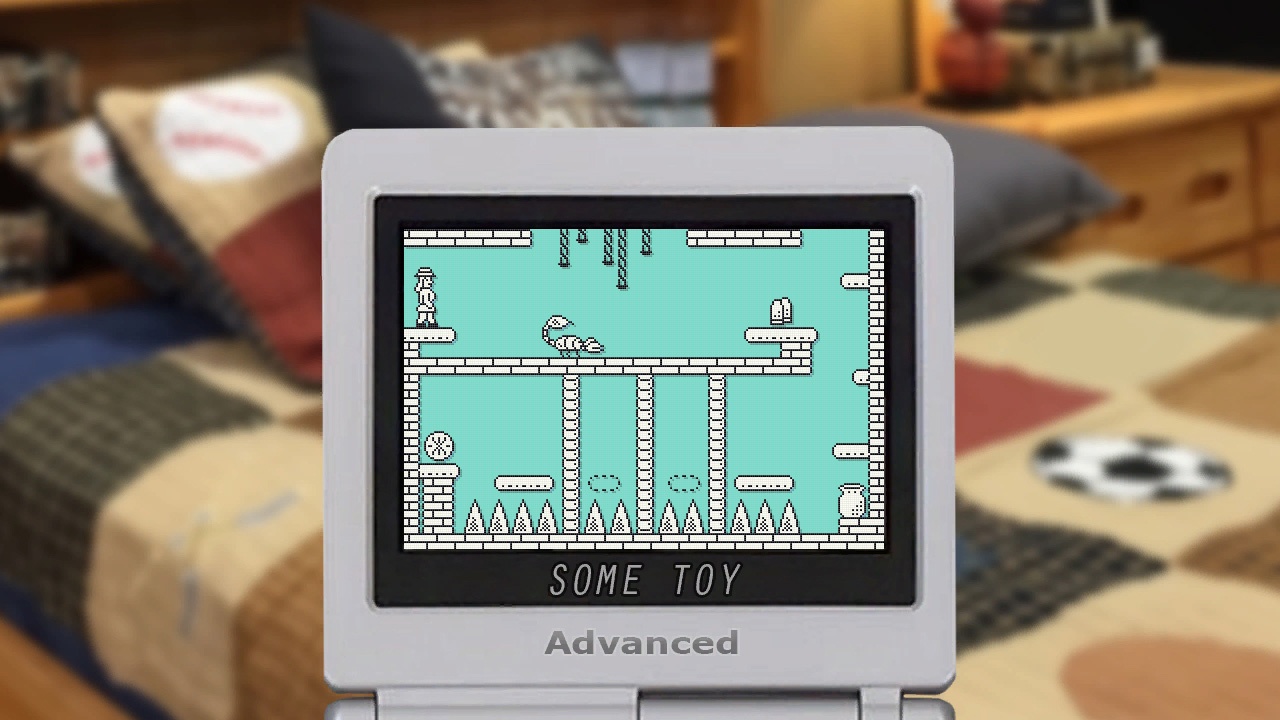 The Adventures of Elena Temple is equal parts homage and satire of the classic puzzle platformers of yesteryear. The game itself stars the titular Elena Temple, who must brave more than fifty rooms of a nefarious and deadly temple to find all eight gems hidden within. In the course of her exploration, she’ll encounter spikes, snakes, bats, arrows and any number of other terrible things that will kill her instantly. Of course, she’ll respawn instantly as well, but that’s not the point. It’s up to the player to use their wits, their reflexes, and Elena’s incredible inefficient pistol to get through this lost shrine and return a much wealthier woman.

After I first loaded up The Adventures of Elena Temple, I had to do some quick research into the solo developer, GrimTalin, to find out what else they had been up to. I was shocked to find out this is the very first game that GrimTalin has created, because, quite honestly, there’s this level to it that I hope I can properly convey in words. The best I can come up with is Déjà vu, if only because it looks and feels like a game I would have played in my younger days. The visuals we can discuss in a moment, but the way the game feels is what really takes me back to the early days of the NES and even before. 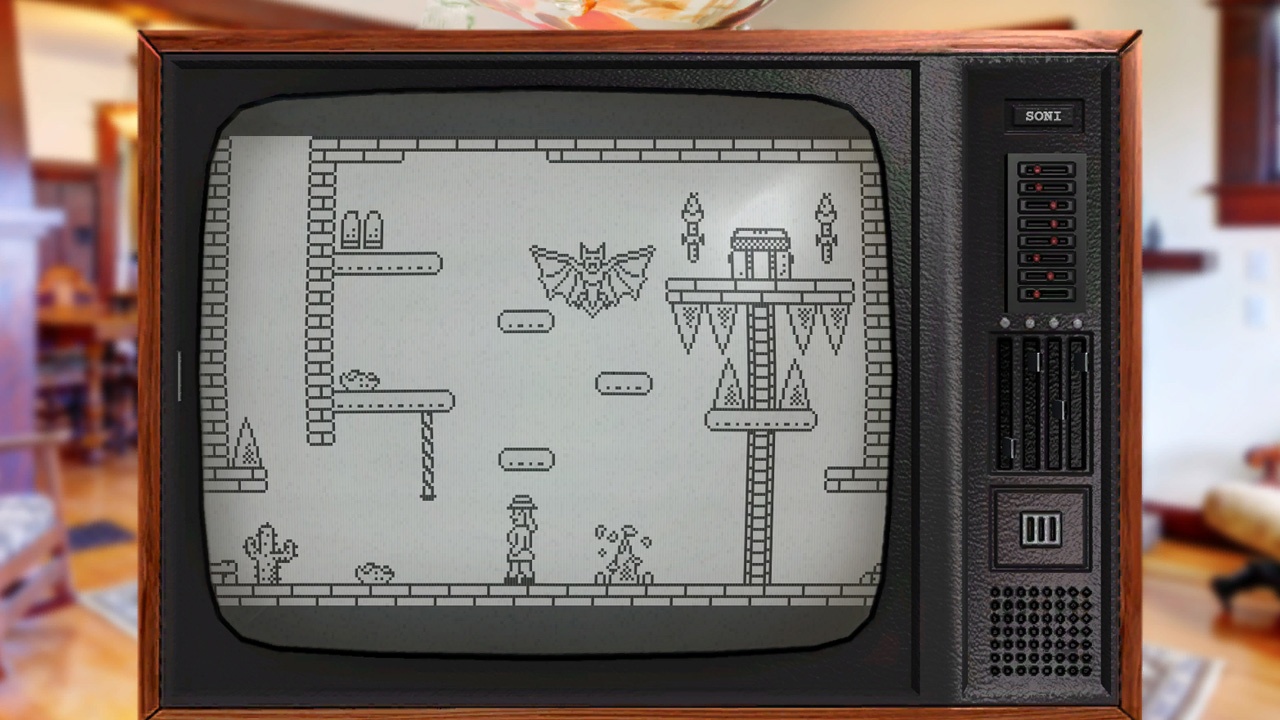 There’s this idea that’s echoed throughout the “retro gaming” world about being able to recapture that kind of mentality and motif, and it’s usually done in a few different ways. Some people lay pixel graphics on top of smooth controls and beautiful sound. Some purposely maim their game so that it glitches and feels wonky, thus truly emulating the frustrations that came with the titles of yore. But Elena Temple does something truly interesting. This feels like a game that was created, with an unbelievable number of resources, during the heydays of the 3rd generation of video games. Sure, this is when you saw things like Mario and the original Sonic start to appear, but Elena moves in a manner that really recalls that situation. The controls aren’t clunky, they’re precise: if you get the jump at the right time, you stick the landing, no questions asked. If the bullet lines up, you’ll hit the target. If you touched the spike, you’re dead. You have no one to blame but yourself.

As you may have guessed, the game is far from easy. Elena has a ton of issues to deal with, not the least of which is her two-bullet gun. There is ammunition all over the map, but you’d be surprised how often one more bullet would make the difference. The rooms can feel a bit blurred together, but that’s what the map exists. There is quite a bit of backtracking: Elena will end up revisiting some rooms countless times on her journey back and forth to where she’s going. Those eight gems seem like an easy thing to obtain, but there’s so much nuance into where you have to be, where you move, when you can jump and when you can’t that death is an unavoidable obstacle. I do wish there had been a death counter somewhere to let people know how much they sucked out in trying to finish the game: much like 1001 Spikes, some bragging rights would be in order if you managed to finish it with ten or fewer deaths. But this is also the kind of game where people are going to keep trying and get it done faster, smoother, less deathly, 100%, etc. Because it’s damn fun.

The 100% might be really difficult, because the secrets abound in this game. Elena Temple gives players little hints and clues that there’s more than meets the eye to the lost pyramid(?) she’s in, but you can’t know for certain unless you go around shooting every damn wall and pillar you encounter. I found a scroll that suddenly marked where all the unfound treasure chests were on my map, and suddenly the game was going faster. If the game doesn’t randomize things (I don’t believe it does), players could conceivably knock out the game in an hour, but I honestly don’t know if that’s true, because I still haven’t found all the scrolls or 120 coins. What’s the minimum needed to beat the game? I’ll have to find out in future plays, of which there will be many. 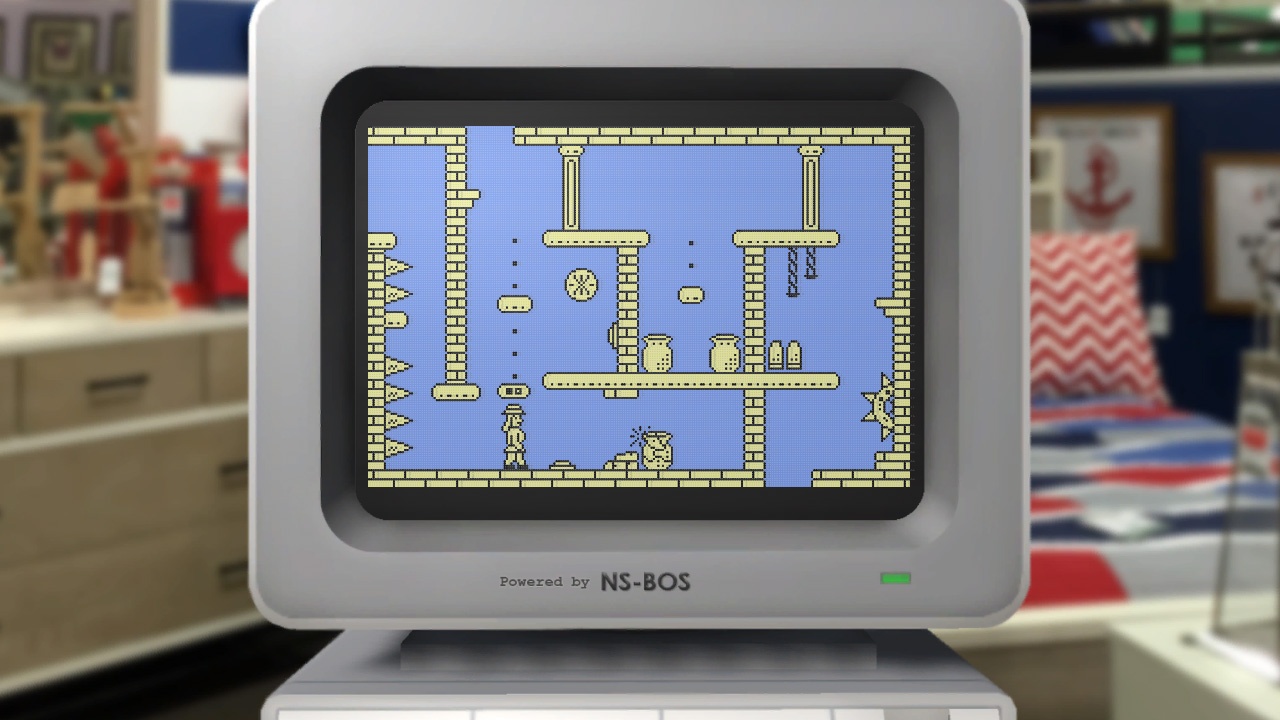 Additionally, I absolutely, positively adore the different skins and shades that come with the game. There is a fake history about the “real” developer of The Adventures of Elena Temple, and how some ill-fated choices made the game get released on six different failed systems, plus one rom hack that the community made after the game collapsed. Each of the skins allows you to see how Elena Temple would have looked on things like the Commodore 64, The Apple II-E and even the Gameboy Advanced (though all are given different names). There’s this bit of back history into how the developer was doing at that stage in his life, and it’s this utterly ridiculous setup that just feels goofy and silly and is pointless but in the nicest way. Plus, there’s this level of disbelief that you can start playing the game on the MS-DOS, green monochrome version, stop, and then just keep playing on the sharp and shapely rom hack version like nothing even happened.

The Adventures of Elena Temple is not a sprawling, multi-world epic or a gorey, realistic shooter. It’s this wonderful little nugget of tribute and nostalgia that rolls like a Katamari through the annals of video game history and picks up everything along the way. It’s simple but tight, repetitive but engaging, and fits neatly into the library of anyone who ever picked up a game controller on a system made prior to 2002. It doesn’t have to just be for the old folks, it can be for the young people who love the way games are and were. Elena Temple stands next to games like La Mulana and Gunmetal Arcadia as shining examples of how to best capture the games of the past in today’s world. Also, huge props to GrimTalin for having the game launch at the same price as Steam, technically cheaper with the launch discount. Switch users shouldn’t always have to pay a console tax.