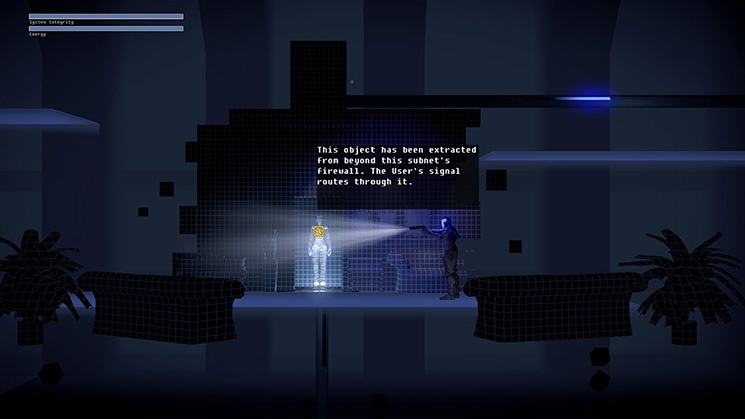 None of us are saints. Not a single living soul has achieved a level of piety and sanctitude that allows us to say, with absolute humility, that we are pure and untarnished. There are sacrifices that must be made, sometimes daily, to provide life, momentum and reward to both ourselves and those around us. Not always is the process clean, and, inevitably, there are lines that are crossed, both minor and major, that make us question our motives and our compass. But, ultimately, we know, deep down, there is something we must all accomplish in order to survive, and that isn’t always the prettiest, cleanest or kindest path. Still, we walk, we forge, we move ahead because that is what we must do: we must survive.

The Fall Part 2: Unbound is the second entry into the saga that Over the Moon started several years ago with The Fall, an interesting and unique exploration/puzzle game. You control A.R.I.D., who eventually calls itself Arid, an AI space suit that’s trying to go rogue in order to save the person inside said suit. However, after working and pushing against the bounds of its own programming, Arid releases there’s no one inside the suit, and it has been breaking protocol and violating orders for the selfish reason of self preservation. It was a strangely dynamic hit, and it causes a breakdown on Arid’s part that left the player confused and upset as the first chapter concluded, with Arid being carted away for recycling. Genuinely, watching something grapple with the fact that it serves no greater purpose than its own existence is something that has a identifying parallel that we all end up encountering at one point or another. It’s called an existential crisis, and it’s genuinely unnerving to watch a computer program go through it.

Unbound brings us back mere moments after Arid has been junked and her AI is set to be re-programmed and corrected for future use. Arid, however, has now released that the unexpected benefit of not being bound by rules of a higher power means it (now she) can decide whatever her future is. And Arid has decided not to die and be erased, here, in the bowels of some unknown space station. Attempting to escape, Arid discovers that her former body is now under the attack of some distant assailant, whom she dubs The User. Arid now must navigate the tunnels and platforms of a pseudo cyber space in order to find out where the attack is coming from, shut it down and grant herself freedom. Of course, it’s never really that simple, not in a game that’s already tested the players limits in terms of empathizing and aligning with a being who has finally understood freedom and survival. No, Arid now is going to test her own moral barometer and find out what is needed, what is trivial, and what is ultimately relevant in terms of who or what will be stepped upon during her climb out of Hell. 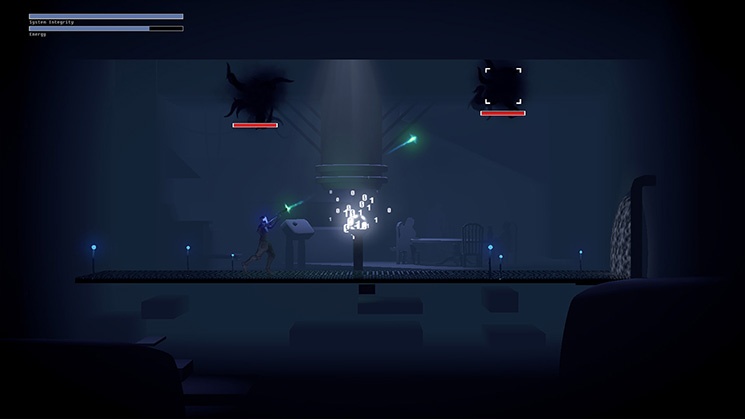 First and foremost, The Fall Part 2: Unbound is monumentally more impressive in terms of game length and decisions than the original. As much as I enjoyed The Fall, it essentially boiled down to one long afternoon of discovery that came to an abrupt (but tantalizing) ending. Since the landscape where we first met ARID was essentially one that was both alien and familiar, there were a lot of shadowy elements that made the game go by quite quickly since they were so easy to gloss over at the time. This is simply not the case for Unbound, which is expansive while still being quite controlled and centered overall. As it’s impossible for Arid to enter her own body, she must reach out to find vulnerable access points that she can interact with (initially) and discover a multifaceted world that seems to cross planets and show us a much bigger idea of what civilization is like, as a whole, in the game’s current climate. You get the impression of how technology is more intricate and also integrated into everyday life, from the presence of a Butler droid to an entire planet of hivemind bots. It actually gives a great leg up for the possibility of an expanded world in the future, wherein Over the Moon might consider creating additional titles that aren’t necessarily starring Arid, but have elements that were established in Unbound.

Diving into the gameplay itself, there are certain facets that carried themselves extraordinarily well. Firstly, the combat, which, except for a few key moments (especially towards the end) seems almost incidental to the story overall. Arid must take action against intrusive software and pushback from her hosts through ranged combat, and this is, arguably, the weakest point of the game. The jumping is rather lackluster and felt sluggish, and the gunplay was almost too perfect: once you lock onto a target, you can hit it from any spot on the screen as long as you have a clear line of sight. But, as I mentioned, it’s all incidental: there’s even a toggle that you can adjust at any time to make combat more or less difficult. There was clearly an understanding by the development team that the combat was important enough to keep in the game, since it added a real layer of storytelling, but not enough that it should serve as an impediment to moving forward in the complex storyline. As a result, you’re left in an odd spot: I didn’t really like the combat, but I also didn’t need the combat, so it’s a push.

Arid continues the spotlight interaction that she used in The Fall, and it works here to find out more and reveal what spots in the room she inhabits can be interacted with. This translates well into the control scheme of the Nintendo Switch, as the Joycon’s natural joystick setup is almost as good as the WiiU (I adore my WiiU and will fight anyone over the subject). When Arid leaves cyberspace and inhabits a host, the spotlight comes with her, so you aren’t left fumbling in the dark when you become a robot pleasure unit or the like. Unfortunately, Arid does leave her jumping in her classic form, so there is some slowdown in general when you need to take a jaunt in a borrowed form. This mostly isn’t a problem, but I often found myself going to hit the jump button and then being surprised that nothing happened. Is that because I’m malfunctioning myself? Hard to say.

Now, onto the really delicious bits. The Fall Part 2: Unbound makes most of its mark through problem solving and puzzle arrangement, which all must be done through manipulation and loophole searching of the hosts’ own rules. Besides the normal issue where we have to find items that work with other items to make stuff happen (you know the one), there’s also the fact that you can’t do certain things because, initially, the robots won’t be programmed to do them. The very first host you encounter is the Butler that I mentioned earlier who literally cannot and will not deviate from his morning breakfast routine, no matter how many times you do it. You need to think fast and change just enough of the world around him to make a deviation possible, and, from there, building upon that to finally get to where you want to be. It’s sometimes very minute and difficult to understand, but the great part is that it’s all dictated as you would expect for robots: logic is the overall powerhouse, and it must be honored. 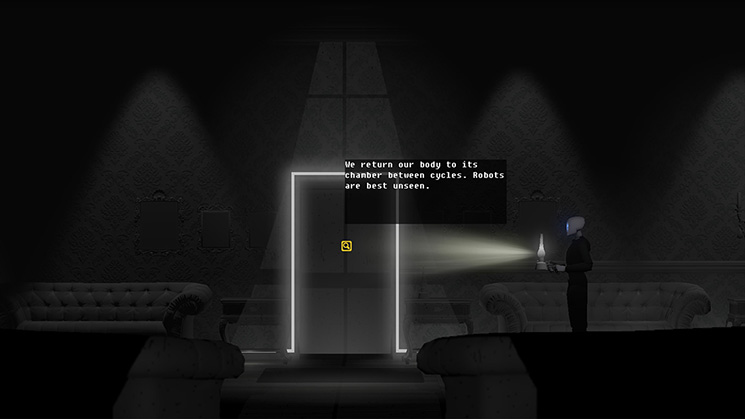 I will say that there were some tough moments due to the visual elements of the game, and I’m not totally sure how to improve upon that other than to have a careful eye. There is a single item that needs to be discovered in the second host’s world that I missed over and over because it was dark and I didn’t think to look down at my feet. Once I happened upon it, things got back up and moved forward at a good pace, but I seriously spent about 30 agonizing minutes riding the elevators up and down, trying to find my error, till I broke down and checked the helpful notes Over the Moon had provided for me. I’m not proud I needed the walkthrough for that moment, but it finally resolved itself and things moved forward. Basically, if you want to make sure you’re not breaking out in a sweat because you’ve boxed yourself in, use proper lighting in your play area and sweep very carefully in some instances.

The biggest and best part of The Fall Part 2: Unbound is the story itself and how it’s told. Arid is not the same AI that we met in the previous game: she’s developed a real sense of self preservation and some rather human fallacies of emotional outburst and borderline sarcasm. Each of the hosts have a different form of interaction, with their own AIs exhibiting personality traits themselves. From head to tail, the whole thing is deliciously voice acted, and it’s a treat to hear Arid interacting with the stuffy and curt Butler, the condescendingly arrogant One and the conflicted but positive Companion. You get a real sense of their worlds and their “lives,” how the change and evolution that Arid is infecting them with is altering their perceptions, and usually not for the better. There’s an underlying theme of “ignorance is bliss,” and the addition of the information and theoretical thinking that Arid brings in being disruptive and hazardous. We even see Arid herself questioning if she’s on the right path, if her choices are really the best for the hosts that she has to manipulate and control. But you see moments of Arid trying to make the “right” choices, doing what seems like the kinder option, only to have things backfire in spectacular fashion. I actually chuckled aloud at a few stonewall exchanges between her and The One, well worth the time to follow all conversational routes.

Between the beautifully designed levels and characters to the superb voice acting and scripted elements, The Fall Part 2: Unbound is a worthy and satisfying follow up to the original indie classic. Fans may be a bit put off by how heavy handed some of the moments of philosophy can come across, but they’re important and give a sense of being to Arid and her crusade, which the player can dictate if it’s more vengeful or redeeming. With some truly jaw-dropping moments of revelation and curiously engaging shows of “humanity,” this is setting up to be one of the great games of 2018, and I’m almost jealous that it’s not a Nintendo Switch exclusive. Still, the most important idea is that everyone can find out Arid’s fate and see what the future holds, so, across all platforms and consoles, I say good luck: the road to freedom begins today.