If I learned anything from my time with Superbeat Xonic, it’s that rhythm games certainly used to be my thing, but they absolutely are not anymore. I can’t keep up with fast paced twitching of fingers and eyes in order to keep the music moving. But I desperately want to! Why can’t someone make a game that relies on music but maybe makes things a trifle easier for me? After all, there doesn’t HAVE to be a AAA setting in which I master every single note, stroke for stroke, while keeping time with a 300BPM Korean pop song I’ve never heard before outside of this arcade. More importantly, won’t someone do me a solid and make another roguelike game, because it’s dreadfully apparent at this stage of my life that I’m an addict and I need these kinds of games in my life? Naturally, someone did, a long time ago, when Brace Yourself made Crypt of the Necrodancer and completely blew me away in terms of ingenuity and execution. Now, three years later, Crypt of the Necrodancer has finally arrived on the Nintendo Switch, and it’s fantastic.

If you don’t know the story of Necrodancer, it plays out a bit like this: our main, main heroine is Cadence, who has a pretty bad start to things when her father goes missing and her heart is stolen by the titular Necrodancer. Determined to get both of them back, Cadence descends into the Crypt to fight the evil, musical wizard and get things back to where they should be, What’s really crazy is that the plot of the game actually spans across three separate characters, who are all unlocked, in turn, by defeating the game one after another. However, that seems to imply there’s only three characters, when this is far from the case: there are fifteen different characters, each with their own quirk, several with their own storylines, and one that is (currently) exclusive to the Nintendo Switch. It’s highly likely that you’ll develop your own personal favorite character to play through the game with, but it’s in the same situation as The Binding of Isaac: you’ll try all of them at least once, and ultimately rest on one for your own enjoyable runs. I do recommend giving them all a try, because there is something satisfying about mastery of complex, difficult characters like Mary or Aria. Although, if I can never play as Aria again, it’ll be too soon. Gameplay wise, this is where Crypt of the Necrodancer shines. The idea is to move through a dungeon to the stairs that descend to the next level, which is only unlocked after defeating a mini boss of sorts that guards the staircase. You move around on a grid-like floor, with some changes in terrain (water, electrified panels, occasionally trap doors) and fight minor enemies to get gold and buy equipment, as well as finding random items in chests that can help you out. It’s all very standard in a dungeon crawling sort of way, but here’s where the rub comes in. As you play, you have a clear visual of the beat thumping along with your heart at the bottom of the screen, and you must, must keep moving, attacking and doing whatever in time with the music. Failing to do so means you lose multipliers, maybe take damage, and, moreover, end up getting murdered by enemies who are keeping perfect time.The result is the need to constantly be thinking on your feet, keeping one eye on your immediate proximity and one eye on the rooms and baddies ahead which, surprise, you can’t always see before you get there. If you were never great at marching band or even banging on a bass drum, this game will destroy you in seconds.

As a roguelike, Crypt of the Necrodancer also has the delightful situation where you never have the same layout of enemies, items or rooms twice. You may be lucky and end up finding a beautiful new broadsword or whip in the first chest you find. Maybe a shrine will appear where you can buy a new spell to turn gigantic, or even a piece of cheese to bring back some lost health. But, more than likely, you’ll find a room full of bats, or trigger a bomb trap, or get attacked by a section of wall that was actually a mimic. The randomization of the game starts out chaotic and only gets worse the further along you get in the game. As you travel downwards, you find diamonds that can be traded in for permanent upgrades and changes to the game. Make new armor spawn, increase your gold multiplier, max out your hearts and it still won’t be enough to deal with the level of insanity you have to eventually overcome when it comes time for a boss battle. Have you ever realized you just fell through a trapdoor and into a giant conga line, and all you have is your starting dagger because RNG has deemed you unworthy of getting a damn whip? That’s the joy and pain of this game. And it’s all happening over a funky beat.

Crypt of the Necrodancer feels like a perfectly natural port onto the Nintendo Switch, and not just because Nintendo locked down the character of Reaper to be used exclusively on their release (and Reaper is pretty dope, I love summoning soul familiars). Moving along with the C buttons is a perfect fit for navigation, and the Joycons tend to be pretty forgiving and amicable in terms of keeping you on track. What’s more, since every Switch has two controllers built in, it’s excessively easy to get a co-op version of the game going wherever you are. As always, I do recommend having a second controller on hand, because a single, sideways Joycon isn’t always the most comfortable experience, but it’s far from impossible. Additionally, I feel like the Switch version loads significantly faster than my iOS version ever did, so I’m grateful for that. 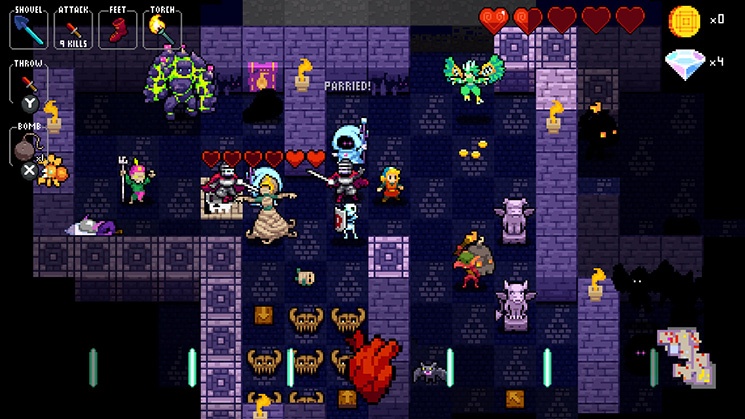 This is the part where I get excited, because it’s where I get to cut down any negativity that people may be floating around regarding this game. You see, inevitably, you’ll find someone, or several someones, complaining about the price and comparing Necrodancer on the Switch to the five dollar or less model you can get on Steam if you wait patiently. And if Brace Yourself had released Crypt of the Necrodancer as a vanilla title, then sure, I’d be right there with you. But it’s not just the extra character that’s here. It’s everything. Every single piece of DLC that’s available on the store, from the Amplified overhaul pack to the Chipzel and A_Rival remixes are baked in, ready for you to use them however you’d like. The Danganropa remix is here, along with the ability to reskin each and every character to look like Monokuma, Shiren the Wanderer and several others.You can assign individual soundtracks to each character, or you can set it to random so that every time is something new and awesome. As far as I can tell, the only thing not here is the “Extra” DLC that has the documentary and some promo images on it. They wanted to make sure that the Nintendo Switch was the optimal, ideal place to play their game, and I’d call this a home run. Sure, you can’t do custom trackwork as of right now, but that’s probably something in Nintendo’s code structure as it is, and maybe that’ll change in the future. Right now, however, this is damn near everything in a single shot, and it’s ready to go from the drop.

It’s hard to imagine a world where someone can find a problem with this release of Crypt of the Necrodancer. It’s packed to the gills with content, it runs like a dream, the gameplay is still top notch and now I’m totally distracted from wanting to play anything else. If you’ve never played before, get this version. If you’ve played before, get this version. If you own the Steam version, every single DLC, have your own custom dance pads and don’t own a Switch, fine, fair enough, have it your way. But this is fantastic, and I’m already saying that 2018 is going to be another gangbuster year for the Switch.