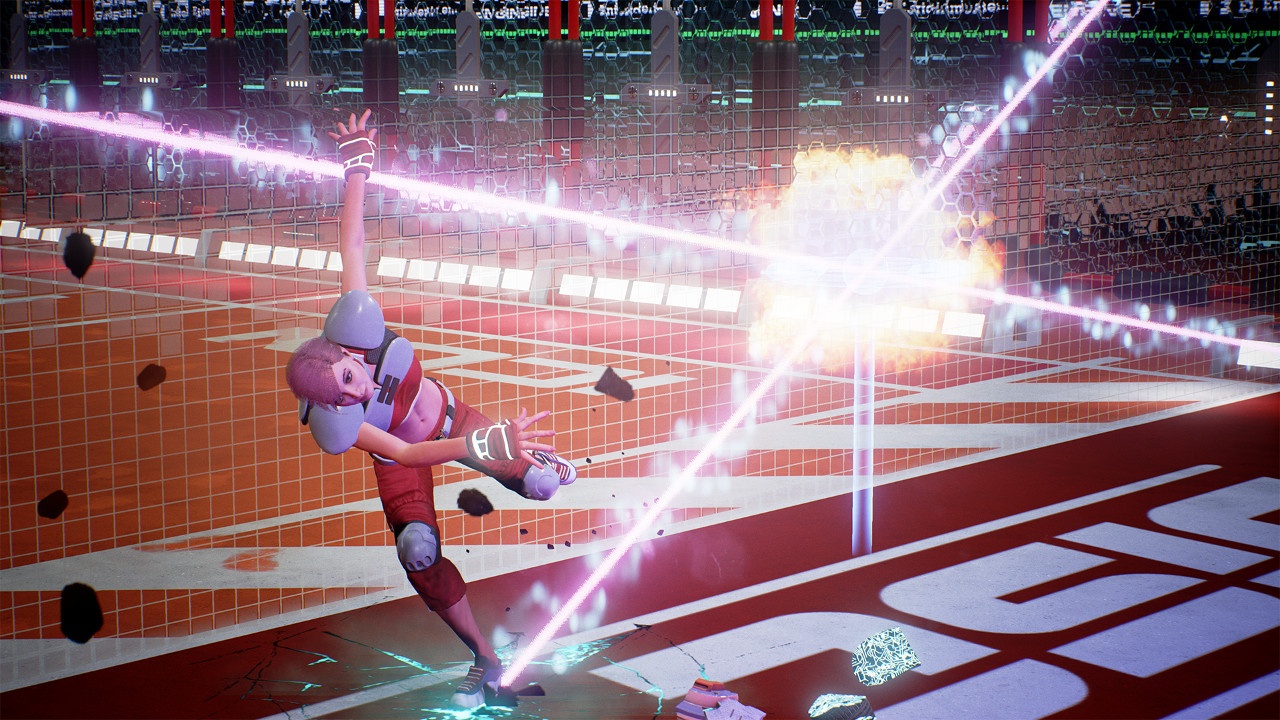 Almost a year after its original release on the Playstation 4 and PC, Disc Jam, developed and published by High Horse Entertainment, is now swerving its way on to the Nintendo Switch.

This fast paced, action-sports game sees you scrambling, sliding, blocking and catching in a mashup that sits somewhere between Disney’s Tron and a good old game of Tennis. The basic premise of the gameplay involves throwing a Frisbee, or disc, across a tennis-style court in order to make it impact on your opponent’s back wall, thus scoring a goal, and stealing the points. Played in either singles or a doubles match, you fling your disc using a variety of moves such as regular shots, swerve shots, lobs to catch out the unaware and super power shots that sees your disc loop around or move irregularly in a blazing trail of glory.

Each successful rally adds a point to the score, conveniently displayed on the net, as they accumulate to give you a total that can be won by successfully hitting your opponent’s goal. However, in order to win these points you also have to stop your opponent from stealing them by making sure that you stop their returns from impacting against your wall. Whoever reaches the total of fifty points or more first, wins the game in a competition that takes place over the best of three. 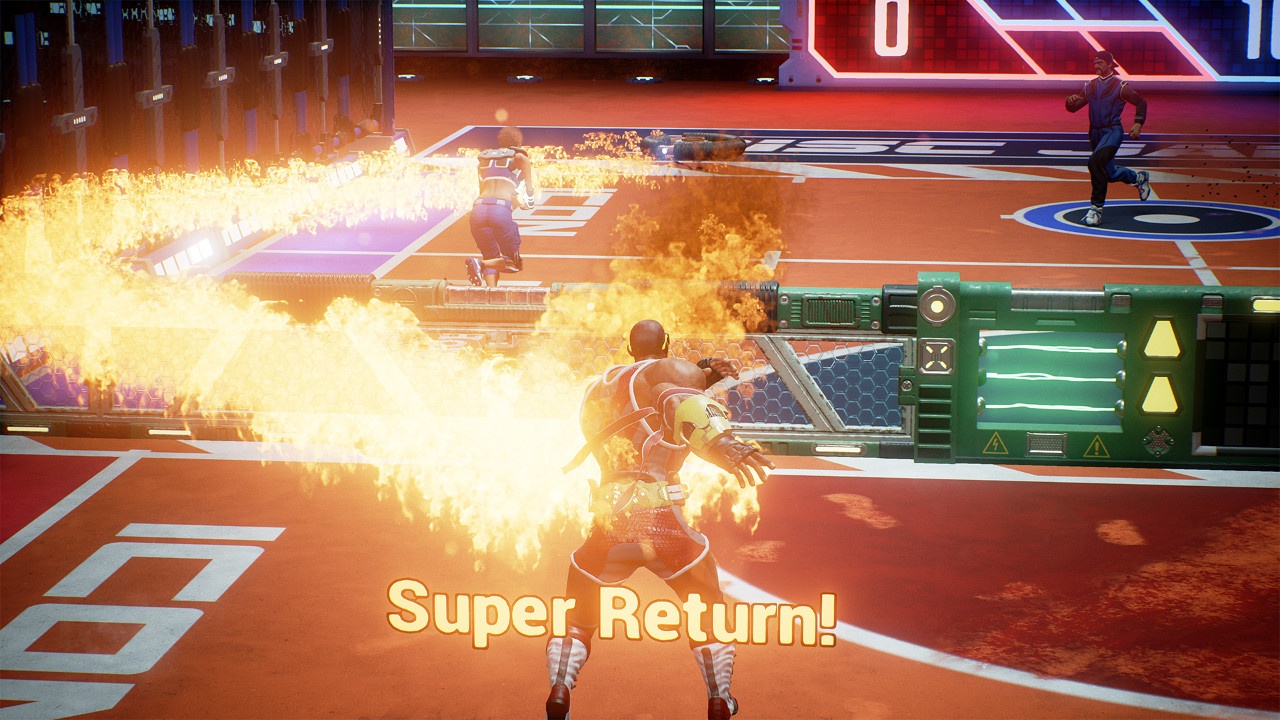 This basic element of gameplay makes for a title that is easily accessible, yet difficult to master. Each game, depending on the skill level of your opponent, produces an air of tension as you work towards protecting your goal and reading the trajectory of the returning disc. The longer you can string together a number of rallies, the more intense the matches become as you battle to catch the disc in a hope of returning it in a manner that fools your opponent. Using an array of moves, you can curl the disc, ricochet it off the side walls and even deflect it with a shield, which can result in a number of outcomes depending on where you are positioned. If you are near the net, this shielding can simply flop the disc over the net if your opponent is situated too near to the back of the court, if you are positioned anywhere else, the shield flips the disc into the air and if successfully caught, can utilise a super move that adds to the pressure of your opponent in trying to stop your return.

Timing becomes an important element here; depending on how quick you can react in throwing from your initial catch, determines the style and force of your shot. By successfully chaining together split second moves, you can easily pull off some fancy throws that will have your opponent dancing all around the court in their efforts to try and combat your style of play. All of this combines to make for a thrilling ten minutes or so that it takes to fully complete each match. However, mainly due to a slightly stop/start nature in its style of play, it can fall just slightly short of the urgency that, probably its closest rival, Rocket League produces.

A roster of six characters also offers a variety to the gameplay, although the differences are quite subtle. Ranging from strength, technique, speed and all-rounders, this choice of playing style adds a degree of playability as you experiment with who best suits your style of play. There is also a high level of customisation with these characters from emblems, tags, skins, taunts, discs and throws. With each victory awarding ‘J’ credits, used to unlock these customisable options through the use of a vending machine, this can also create a sense of urgency with the need to win matches in order to add your own mark of personalisation to your chosen character, as well increase through the rankings. 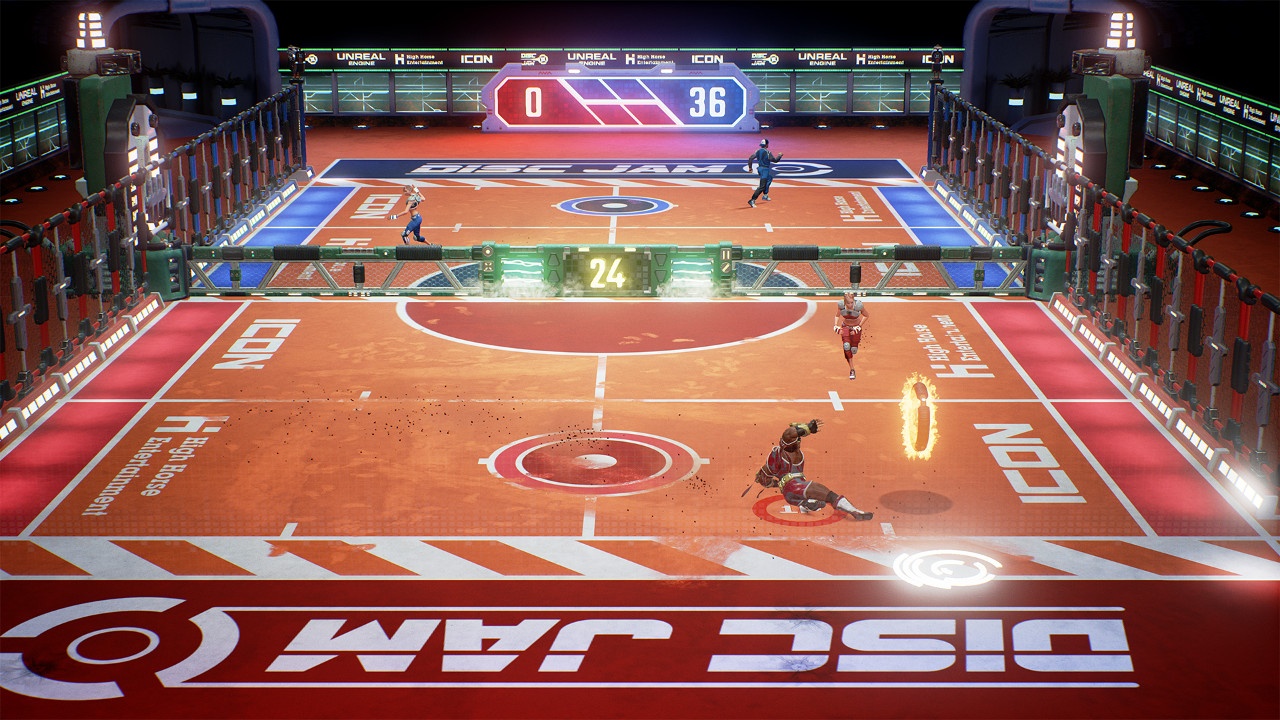 With this Switch version, coming off the back of Disc Jam’s biggest ever update, it now boasts the most definitive version of the game to date. Running at 1080p docked and 720p in handheld with an impressive unreal engine that runs at 60fps, the game looks suitably crisp with nice character models and animations. The arenas in which you play, although quite minimalistic, are adequate and do look the part with the developer’s promising more variety at a future date. As well as its impressive technical specifications, this updated version of the game also includes new characters, stat tracking and more importantly, a ranked league in which you compete for unique in-game prizes.

The single player element now offers another new addition, the ghost arcade. This mode offers you the challenge of competing against the ghosts of real-life players who are currently placed upon the leader boards. With no matchmaking, your opponent offers a variety in their skill level which can make for good practice sessions and also help with keeping your skills up. However, the main staple in Disc Jam’s gameplay is through its online matches. Battling other players, on the switch as well as on PC with cross-play functionality, offers a real challenge with some exciting games, especially with its new inclusion of a ranked league. If online play isn’t really your thing though, then don’t fret, as the game also offers local couch and wireless multiplayer for two to four players in both singles and doubles matches.

If you’ve ever played Disc Jam before and felt that it didn’t have enough to offer, or if it’s a title that’s new to you, then this updated version is definitely worth a look; especially if your fan of sports-style games. With its new additions, there is now enough content and depth to keep you coming back for more, as well as the temptation of competing in a fully-fledged league in order to show off your skilful talents to the world. Suiting both the Switch’s docked and handheld modes and also offering the element of quick-play sessions or a more, longer stretch, Disc Jam makes a very welcome addition to the switch’s library.