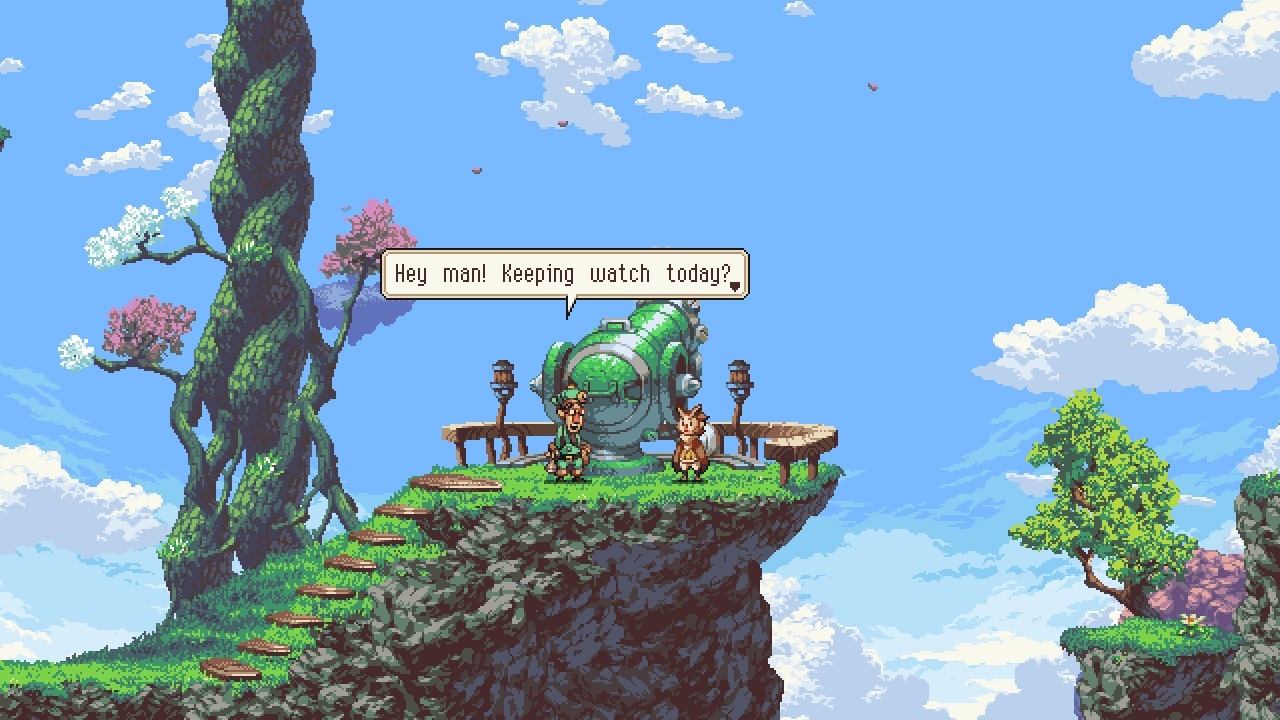 Anyone who’s been in the know about indie games for the past decade or so is a familiar with a little title called Owlboy, which, besides everything positive surrounding it, is borderline infamous for it’s long development window. Far from reaching levels of absurdity such as Duke Nukem Forever, Owlyboy still took an impressively long nine years to finally reach fruition and come out to the masses for consumption. Taking a short moment to search around leads to several reasons for this (expectations, personal issues, etc.) but those often are easily and quickly dismissed by the fans depending on the game itself. After all, a good game is good eventually, but a bad game is bad forever. So there must have been an enormous amount of pressure building on the D-Pad Studio team to finally release something wonderful to justify their time and efforts. In the eyes of a Nintendo Switch player, a console that’s only been around for just shy of a year, that timing seems well invested and has blossomed into a beautiful experience.

Owlboy tells the tale of Otus, an orphaned, well, owl boy, who lives in the scenic and mountainous village of Vellie. Otus is taken care of by Asio, another Owl who seems to openly despise his charge because Otus is a mute that also doesn’t seem totally into being courageous or lives up to Asio’s expectations. When Vellie is attacked by pirates one day and they steal an ancient artifact no one knew slept beneath the village, Otus and his best friend, Geddy, take the task of finding help and trying to figure out what it is the pirates are up to. What happens and unfolds next explores the history and lore of the Ancient Owls, a force at work that’s far greater than simple sky pirates (who do end up pitching in a bit to help themselves), and Otus becoming the hero he always dreamt he could be. In short, it’s a great little story that perfectly encapsulates several tropes you’d expect in a late 80s/early 90s coming-of-age story. However, don’t let the simple setup put you off your guard: there are plenty of twists and some real storytelling that can strike you dumb if you’re not ready, and, if you align with Otus at all, you’re in for an emotional rollercoaster. 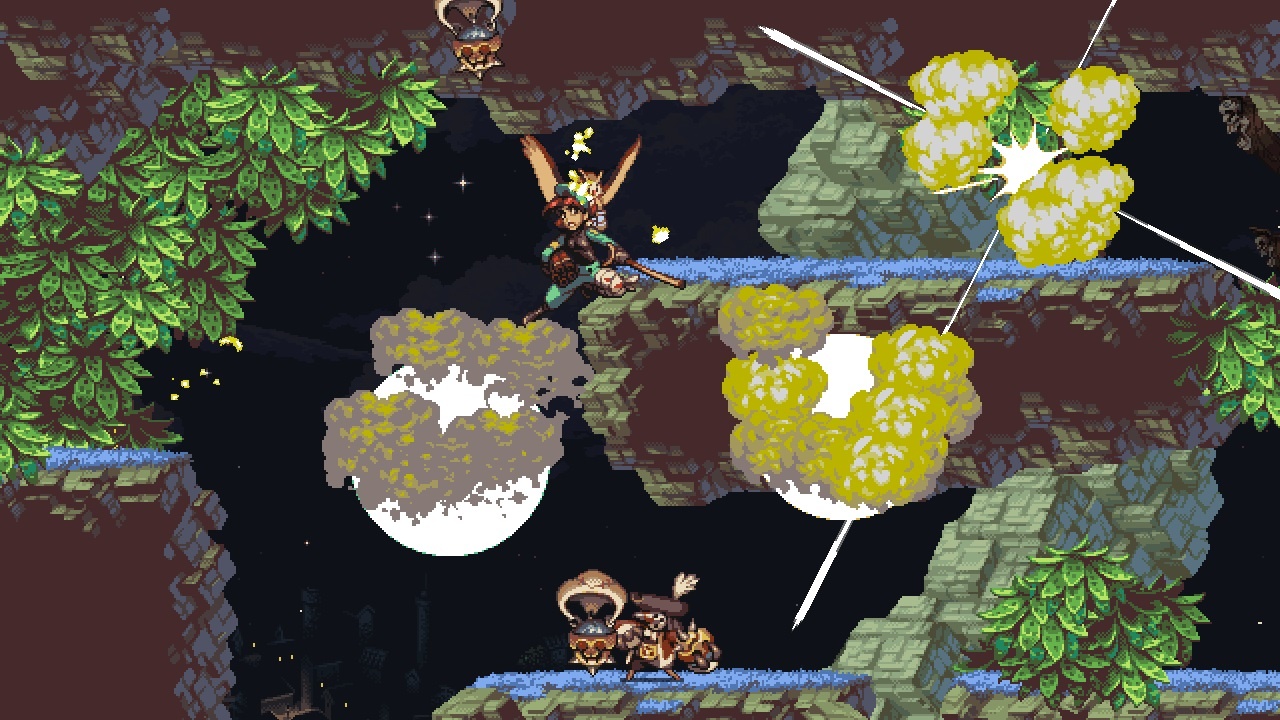 Let’s clear the elephant from the room right out the gate: Owlboy is simply gorgeous, and there’s nothing in the world that can take that away from the game. Done in a style of pixel art that’s borderline sacrilege to the term, Owlboy has a super high-density design that almost seems to play tricks on your eyes. Everything from the slightly blocky clouds to the svelte and sinewy bosses that you encounter leaves you in disbelief that it’s pixel art, but, upon close inspection, you realize this to be true. This is a huge faction as to why the game took so long to create, and why nearly ten years went into a game that can be completed in under ten hours. As much as there’s action and adventure that keeps everything moving along and maintains a compelling atmosphere, it’s really a feast for the eyes and ears equally. The artistic direction that D-Pad Studios took with Owlboy really makes me glad to have all my major senses, because this wouldn’t be half the game it could be had I missed out on the beauty and the fantastic soundtrack by Johnathan Geer. Seriously, if you don’t decide to buy this game, it reaches level of animated cinematic moments where you could really enjoy just watching it. But you should play it.

Gameplay wise, Owlboy uses a very clever combination system that asks Otus to have faith and reliance on his friends and allies that he meets throughout the game. Since Otus is merely an Owl and is most focused on “flying” and “not dying,” he has to decide who he brings along with him in order to do the artillery action. This leads to Otus holding someone in his arms while flying around and the second character shooting and exploding different things. It’s a cool mechanic, and certainly adds more to the story than if Otus had just started picking up weapons and going Rambo on the sky pirates. By relying on other characters to help him and for them to trust him to carry them around the levels, this very core mechanic plays further into the themes and elements of Owlboy at its core. Anyone who sits through the opening will learn Otus feels alone, rejected and worthless most of the time, no thanks to Asio (I seriously couldn’t stand the level of disdain he used towards Otus). This is a feeling that slowly gets worked on throughout the game, and this simple principle – having others trust him and trust them in return – plays into a great build towards redemption and connection. Each character has their own strengths and weaknesses (and some are needed to move the story along), but, for the most part, you can choose who you’d like, and I often chose Geddy, because he was my dude from day one.

Additionally, the ability to lift things is core in certain puzzle solving motifs, and also in Otus keeping himself alive. Since you constantly need to juggle items (friends, rocks, fruit) and also constantly dodge projectiles (bullets, bats, hellfire), Owlboy is a lot more than a pretty face. There’s this sense of urgency that keeps the game moving forward, asking players to constantly be moving, thinking, getting to the next area and backtracking to explore more of what they could have missed. There are times when the game will suddenly slam to a halt, and that’s because there’s something small – a rock to hit a target, a switch that you overlooked – that needs to be ferreted out, and that was a small issue that I had with the game overall. When everything moves and flows so seamlessly, it was jarring to suddenly not be in a forward momentum and need to Sherlock Holmes my way back into the storyline. 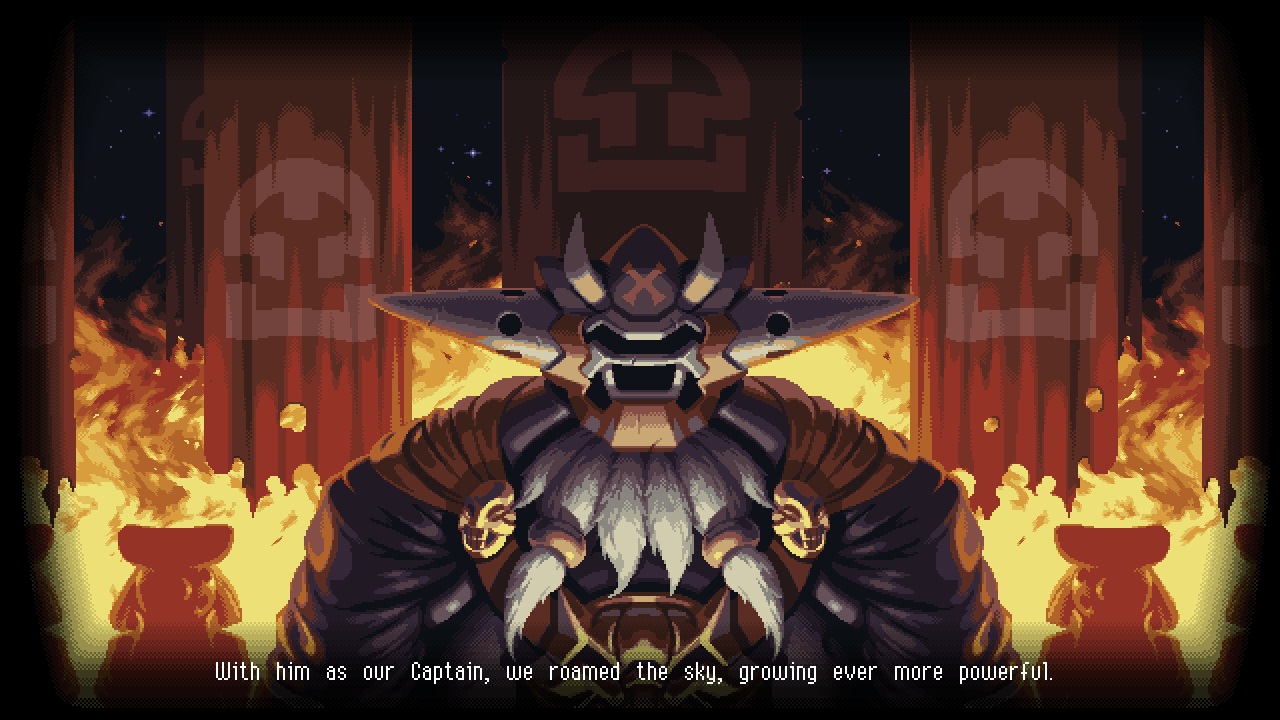 And the game IS hard, please don’t let the pretty pictures fool you. Owlboy knew that it needed to bring its A game in order to justify its position, and it comes across in flying colors. From the very first minor boss to the climactic battles towards the end, you need to become one with the control scheme, and this is where I really want to address the Nintendo Switch’s specific port. You see, I don’t have a great PC rig; it’s primarily for media consumption, but I can play some games on it. Owlboy, shockingly, didn’t run great when I first got it on my computer a year ago, and I gave up in frustration because it was a bit choppy, but I seemed to be one of the few experiencing such shortcomings. Here, on the Nintendo Switch, everything is smooth as butter, loads like a dream and keeps the player active and engaged. As someone who’s gone digital only, I know it can be frustrating to try and keep the memory card clean and also have efficiency. Owlboy sits pretty at under 300 MB, which is a hilarious dream compared to several massive, unoptimized ports that chug along on the Nintendo Dream Machine.

There’s a whimsy and charm but, most importantly, a dream that exists and floats through Owlboy. There are visions and ideas of grandeur that have come all the way, across multiple iterations, to land, lightly and happily, on the crest of the console of the future. When Owlboy began its long journey to life, we were several generations of systems removed, in the days of the Wii and the PS3, when indie titles were relegated to the Steam storefront which wasn’t nearly as impressive as it is now. But we’ve all grown and changed, and come so far in that time, and this game, this opus, has proven that it’s worth the wait. You’ll become enraptured. You’ll have a great time and several frustrating boss battles. You very well may cry at a couple of moments, and that’s all alright. Owlboy is a wonderful title, and I’m so excited for the folk of the Nintendo Switch to take flight with Otus themselves.