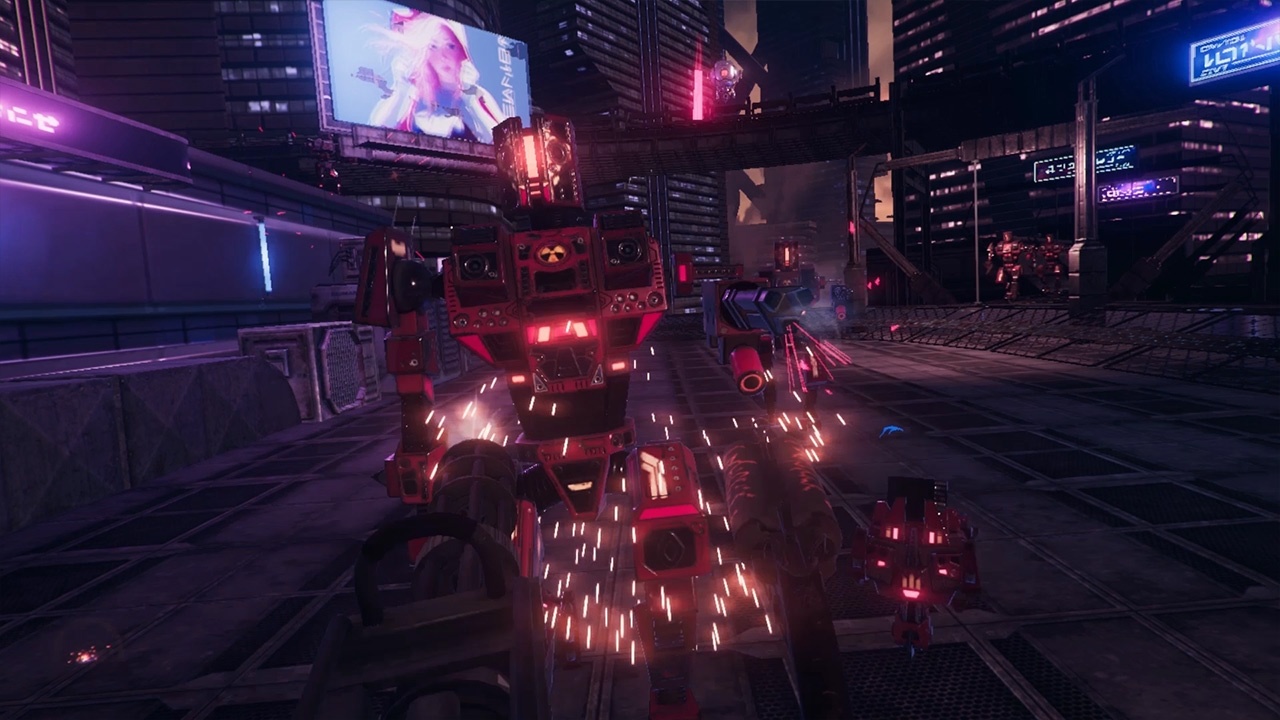 Wouldn’t it be good if we brought a game that didn’t live up to our expectations and we could go back in time to before when we bought it and change our minds? Well, you can, sort of, as long as you have a receipt and the shop allows you to exchange the said game, but then again, this doesn’t involve going back in time. However, with Perp Games and Wales Interactive’s Time Carnage on the Nintendo Switch, you can travel through other dimensions to another period in time; although, you can’t change any games though.

Primarily an arcade-style, wave-based shooter, this game sends you, first person, through four distinct eras in time from the prehistoric jungles of the Dinosaurs to a robotic post-apocalyptic world. Armed with a duality of various weapons, from automatic rifles to snipers and shotguns to grenade launchers, you blast your way through a sixteen-tier campaign or a fully customised experience through the arcade challenge that boasts a collection of buffs to your abilities and a series of game-changing subject specific challenges.

The game’s campaign story loosely follows around an expedition in which you use the concept of time travel to discover a new era for which mankind to flourish. When I say loosely, I mean it in a literal sense, as to be honest with you, the story doesn’t really bear any real significance on why you are doing what you are doing. There’s no cut-scene or narrative to follow as such, just a brief description behind the concept of the game and that’s pretty much it. However, at its heart, this is purely an arcade experience and in that respect, it doesn’t really need a story; after all, this is just about good old-fashioned blasting fun over a series of survival-based levels. 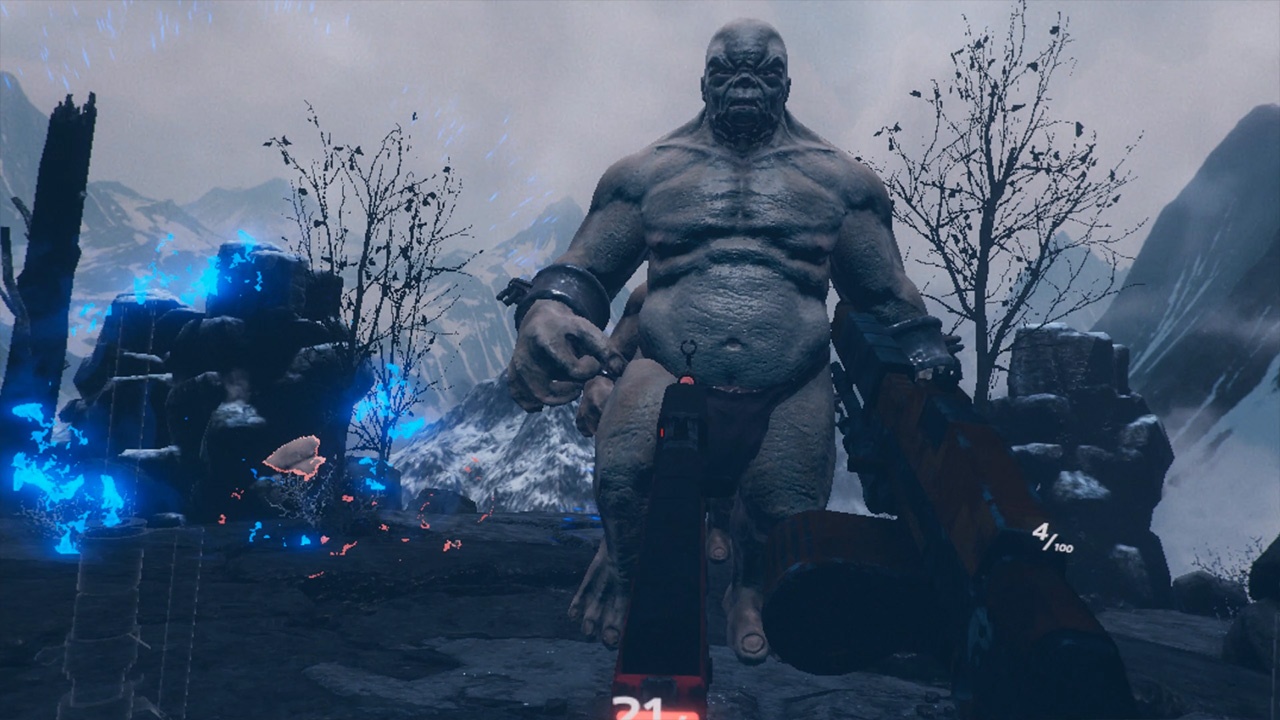 Originally, Time Carnage was released as a virtual reality title, utilizing the capability of a VR headset and motion controls to look around the environment and aim your weapons. Although the Switch can’t run the game in the same way as it was originally intended, unless you strap it to your head, but I wouldn’t wholeheartedly recommend this, a few interesting control and aiming mechanics have made the transition an intriguing one which, for the most part, works quite well. From a selection of three styles, you can choose from a conventional thumb-stick set-up, motion-controlled Joy-Cons or a gyroscopic control scheme. It’s worth experimenting to find a control set-up that works for you, but for me, despite the fun and intrigue with the other offerings, the conventional still remained the most intuitive.

As for the core content of the game itself, you find yourself within a series of different time zones as you observe the environment from the relative safety of a limited force-fielded dome. Set upon four pedestals in front of you, a variety of weapons, which although limited at first soon opens up to you as you advance through the stages, sit ready loaded for you to pick up and pick off the invading armies of the intrigued inhabitants of whatever era you may find yourself in. With a limited bullet capacity, you duel-wield any combination of weaponry and try to protect yourself as a series of enemy types try to break down your force-field; eventually leading them to break you down as well.

As you set about disposing the area of enemies, your magazine quickly empties leaving you vulnerable with no bullets left in your respective guns. There’s no re-load function here as such, instead you need to swap out your current load-out by placing your weapons back on the pedestal and swapping them out for the fresh pair that remain. It produces a sense of urgency, as well as an element of tactical play as you constantly swap out weapons and try to strategize on using the right weapon for the right job. After all, facing off against a triceratops with nothing but a pistol isn’t going to end well. 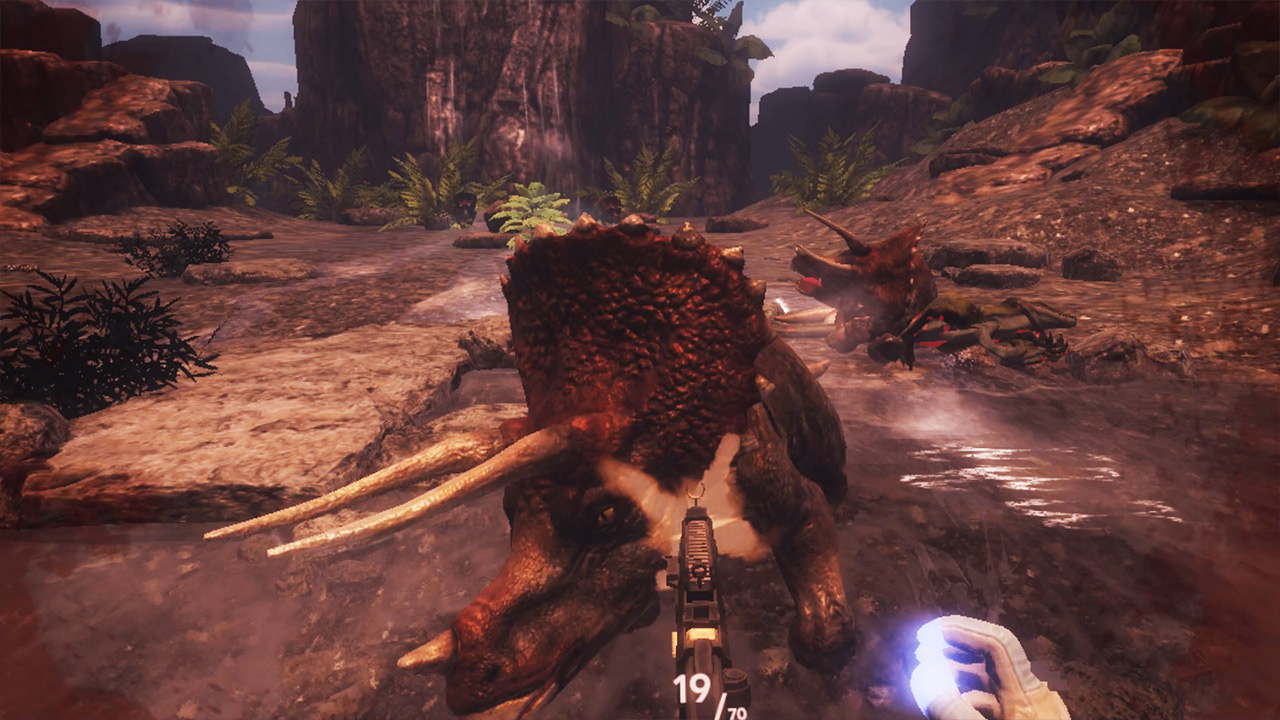 Whatever control scheme you adopt, switching weapons can be utilized with a quick flick of the L and R buttons, whilst each arm and shooting is controlled by pressing ZL and ZR. Rotational movement though, as well as aiming, is dependent on each specific control scheme. There’s no walking mechanic here, you remain purely static, housed within your defensive shielding as you look left and right to keep the marauding enemies at bay. Each of the environments are also littered with interactive items that can create large explosions, or even trigger a slow-mo facility that can help in taking down the more trickier opponents; particularly the flying varieties.

Although the presentation of each of the levels gives an aesthetic that looks and feels true-to-life, the shooting mechanics of the game have been given a more comedic value; something that is very apparent when fighting within the era of dinosaurs, or when faced with a particularly tank-heavy enemy. Position your head shot just right, or fire close range with a shotgun and the great hulking form of a Triceratops, T-Rex or tanked zombie somersaults into the air in a rag-doll mechanic that, although it looks just plain silly, forces some humorous moments; albeit in a limited form while the amusement lasts.

Overall, Time Carnage isn’t a bad little game in the context of being an arcade-shooter. With its ability for solo and couch co-op play, as well as a variety of control schemes and game modes, it does provide a form of fun; although this is strictly limited in terms of depth and longevity. Experimenting with different weapons, buffs, abilities, as well as objective-based challenges is where the heart of this title lies, but in terms of gunplay, particularly the mechanics in which they work, and an overall lack of any particular excitement produces a game that can soon feel tiresome. Weapons feel decidedly weak, missing that certain oomph that feels satisfying which each pull of the trigger and the static positioning of your character feels very flat in terms of actual gameplay. Although it does contain some aspect of replayability, especially in co-op, its overall play time, lasting around three-to five hours depending on how you play, produces a game that feels over before it’s even started; especially when you have experienced everything that the game has to offer. In short, this is a fun game while it lasts, but it won’t be long before you wish you could go back in time and change it for something else.

With its ability for solo and couch co-op play, as well as a variety of control schemes and game modes, it does provide a form of fun; although this is strictly limited in terms of depth and longevity.