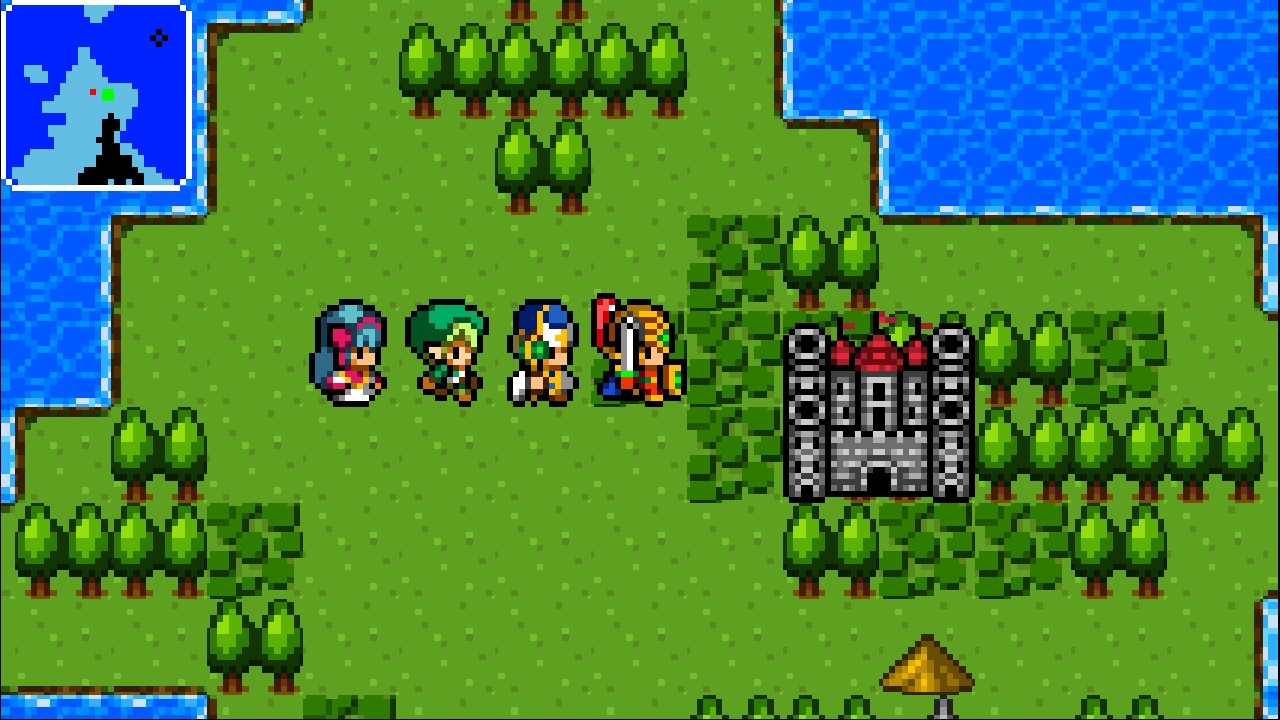 Every once in a while, when we get hungry, we just want something simple and basic to help satisfy our appetite. When you get a steak, you don’t always need to find some classy joint that charges you thirty bucks to sit down. Sometimes you can just go to Outback, get a large sirloin and call it a day, and you can tell your beef connoisseur friends to go die in a ditch. Or when you want a hamburger, there’s nothing wrong with just grabbing something from the Dollar Menu at McDonalds because, hey, it hits the spot and that’s all you need. I feel that way about video games sometimes, too. Not every single title needs to break new ground or experiment with things in bold, reckless fashion. Sometimes it can just be a good experience with well-trodden ideas. That’s, I think, what Dragon Sinker was going for.

The plot of Dragon Sinker is so straightforward you could use it as a length of road on the Autobahn. There’s this massive dragon, Wyrmvarg, who’s a massive dick, and, a thousand years ago, he was sealed away by a human, an elf and a dwarf working together. Not killed at the time, just sealed away, because I guess that’s cheaper or whatever. Anyways, that same dragon broke free of the shackles that bound him and now he’s awake and demanding sacrifices on a regular month. The human prince, Abram (a rather silly name), who is mute except for when you choose one of two things for him to say, leads a doomed crusade against the dragon that results in the death of the best fighter in the kingdom. Now, with the help of his faithful manservant and some cryptic advice from a priest, the prince must set out to find the three legendary weapons that the three heroes once possessed. To no one’s surprise, the prince also runs into an elf and a dwarf along the way, because friendship is magic or something. It’s not a bad plot, and it works well for what we’re all here to enjoy: a retro JRPG grindfest.

Dragon Sinker looks like someone tried to knockoff Dragon Quest back in the 90s and got sued into a hole that they’ve only recently crawled out of, but I strangely don’t mean that in a demeaning way. Balancing classic looks with actual content is difficult to pull off, because you either get “trying to hard” or “pixel art at 60fps is not retro no matter what you say.” Dragon Sinker, by contrast, is actually really spot on in it’s presentation of the classic, NES era RPG, right down to the slightly wonky way your character walks around the map and the fact that a lot of bushes just resemble a bunch of green blocks. My only real gripe with the appearance of the game is that it looks way too zoomed in, which isn’t as noticeable on the TV but is glaringly, almost nauseatingly clear in handheld mode. I could only play it a bit undocked because I was zoomed so far in that I felt like my nose was against the screen. Not really sure the how and why this came to be, but it’s a word of caution for everyone looking to play it. It’s also super confusing because Dragon Sinker is a smartphone first RPG, so you’d think it would look alright playing it on the go. 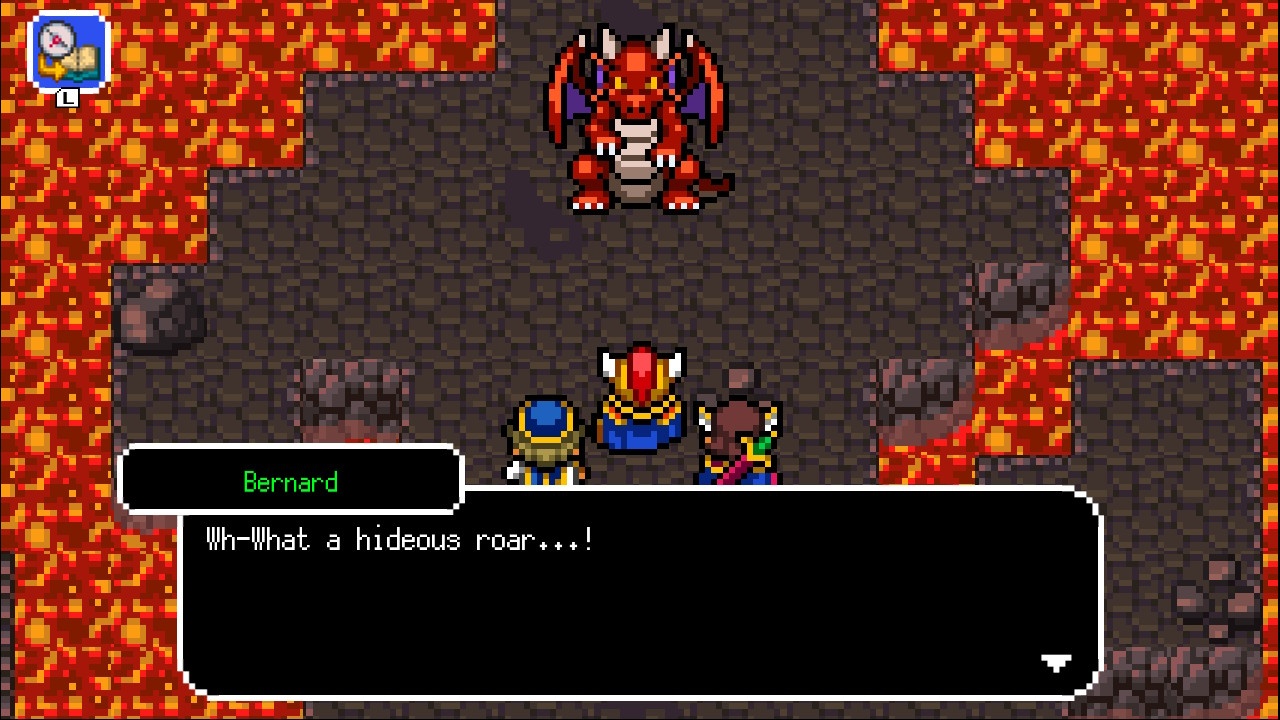 Anyways, as crazy as this sounds, the plot and graphics are not what drive Dragon Sinker (and nor the music, which feels like an imitation stereotype of how 8-bit music should sound). Instead, the core gameplay and mechanics really help make the entire experience worthwhile. First and foremost, the difficulty system, which is something that I admire and enjoy about the new wave of portable JRPGS. Being able to adjust the “difficulty” of battles on the fly makes for a more interesting experience, and also the risk/reward factor of easier auto healing you but giving fewer drops, but hard having more gold and exp (and more damage). Additionally, since it’s a simple turn based system, there isn’t a JRPG player out there who wouldn’t instantly pick up on what you’re supposed to do. Hit the bad guys. Heal the good guys. Use a sword if you have muscles, magic if you’re wearing a robe. There’s plenty of skills and magic to obtain along the way, and there’s a unique job system that actually lends itself a lot of credence for innovation.

You see, usually job systems means putting on a huge variety of hats, leveling up pointless skills, and then finding out which job your characters are best at by the end of the game. Well, Dragon Sinker makes sure it clears some things up immediately, such as not letting the “main” characters have any jobs. They’re royal descendants of heroes, they don’t need to dress up as bards or dancers! Instead, they’re the only ones who get equipment: all the underlings that join your parties throughout the game have to wear the costumes and do the silly cosplay. The jobs have a fair amount of variety to them, especially when you consider that Final Fantasy V was a massive AAA title from the 16 bit generation and Dragon Sinker has more jobs than that. Moreover, successfully maxing out a job on a character gives you a skill scroll that you can use on your main character to permanently learn a new thingy. So, imagine this: with enough grinding, not only are your non-essential characters perfected in their ideal job clothes, but your main heroes have this amazing deck of abilities to use, PLUS they’ve probably maxed out their level. Wyrmvarg has very little chance, especially if you’re a petty jerk like me and switched the difficulty to easy the first time through. 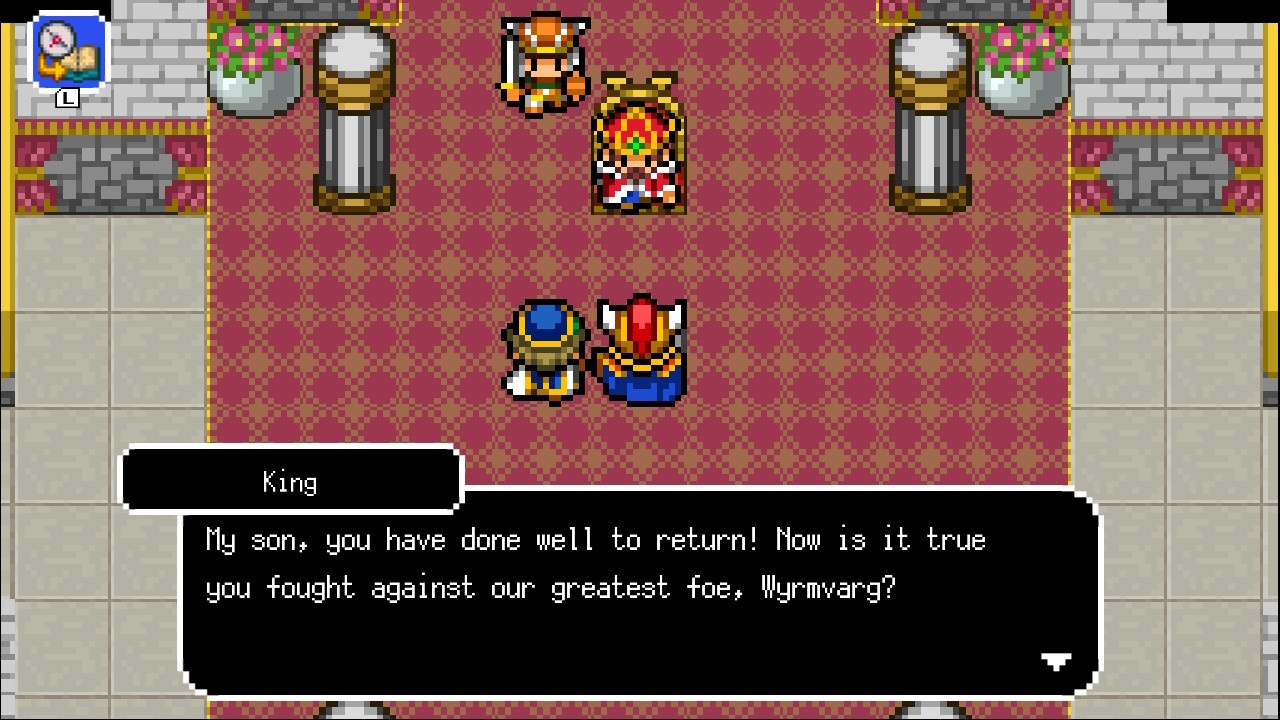 Additionally, since this is a mobile port, there’s a weird little GATCHA system that allows for lotto tickets and imaginary points to buy bonuses. This system is effectively patched up for the Switch to make sure you can’t buy any of these points with real money, eliminating my number one complaint about mobile JRPGS. But KEMCO decided to leave it in, strangely, and make it…useful. Enemy encounters will sometimes drop the points instead of gold or random items. The lotto tickets get autoissued every time you spend 300 gold or more in the stores, and, after the first few levels, this means you get a ton of tickets during most shopping sprees. The icing is that you get 1000 of these points at the start of the game, regardless, and you can instantly use these to make the game even easier should you choose to do so. I picked up a ring that gives me 1EXP for every step I take, and another ring that doubles the EXP I get after each fight. I was level 10 before I even hit the first cave and even my weird healer sidekick was doing 1 hit KOs. You can also pick up skill scrolls, if you’re too lazy/bored to grind jobs, or even pick up unfairly awesome heal potions. This is a big deal, because this GATCHA store is available at any time, anywhere, and you can make sure you don’t die as a result.

Dragon Sinker was able to effectively do something to me that most JRPGS haven’t: capture the joy of grinding. One thing that I loved about Earthbound is, with some small planning, you can become an absolute brute before even leaving Onett and ride the high of overpower well until Threed. Dragon Sinker makes the battles fast, the EXP plentiful and the need for running back to town to heal up void. The story is decent, it just wasn’t as important to me as being a brutal overlord to the slimes, skeletons and kobolds who died in my wake. If you do like the story, good news, there’s actually multiple endings after you beat the game once, and things actually do get pretty compelling once you bring the three primary parties together. This may not fully scratch that Final Fantasy XV itch some of you crave, but it’s a damn sight better than the average mobile port RPG that could end up on the eShop. If you’re a retro vet and you wanna recapture that magic of complete destruction, this is the place to be.