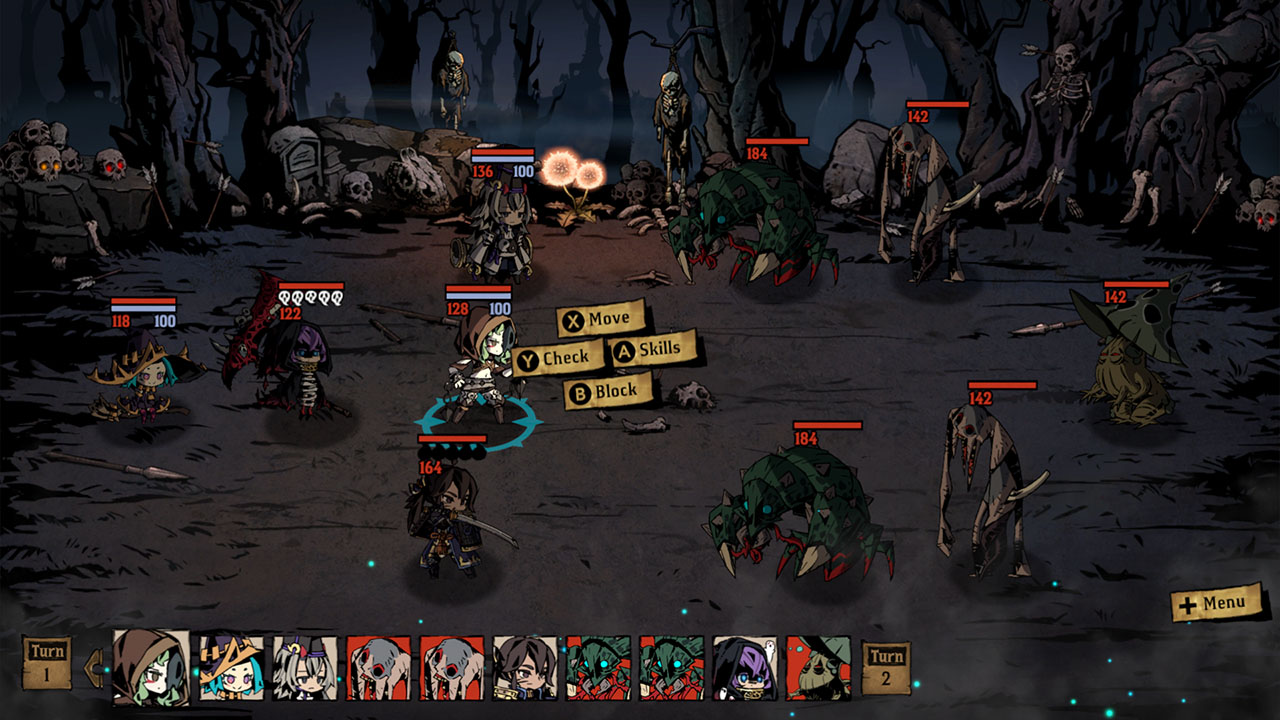 People love punishment in games. It’s the God’s honest truth, and it’s something that still baffles me to this day. We play video games for a variety of reasons – escapism, relaxation, fitness (still going strong with my Ring Fit!), and to experience a sort of meditation, or at least that’s how I explain doing endless puzzle challenge on my iPhone. But to have the game be a sort of catharsis for wrongdoing, like self flagellation or something, seems utterly bizarre. Still, having the difficulty ratcheted up to eleven and then trying to soldier onward does have a perverse excitement to it. Anyone who’s been utterly beaten by Dark Souls, Darkest Dungeons or I Wanna Be the Guy (three very different forms of punishment) will attest to that. Still, it’s important to make sure there’s substance behind the abuse. You don’t just want to be whipped, you must be told why the whipping is happening, or at least have a costume on to pretend that you deserve it. For the folks over at Krafton Inc., the line being ridden between difficult and absurd is a tenuous one, but most players will be able to stay balanced as long as they do their best to be mindful. With a bit of help from Arc System Works, welcome to the gothic darkness that is MISTOVER.

Some years ago, a baleful entity known as the Pillar of Despair appeared quite suddenly, scarring the landscape of the Kingdom of Arta and creating a giant, dark Vortex in the middle of the land. From the Vortex came the Mist, an encroaching cloud that contained the Espers, demented monsters that destroyed and devoured everything theytouched. Suddenly, when all seemed lost and civilization was at the brink, the Mist relented, receding backwards until it was once again within the Vortex. The survivors didn’t wish to wait until the next turn at apocalypse arrived, though. The brave, the greedy and the borderline crazy all banded together to create the Expedition Corps: a brotherhood of would-be heroes and mercenaries with nothing to lose (having already lost some things) and everything to gain. You, the protagonist, awaken one day inside the Mist, with a clean cut case of amnesia and bad guys bearing down on you. Surviving the onslaught, you take up the cause and become a member of the Corps Crew, hoping to find answers, redemption and, possibly, salvation for humanity. 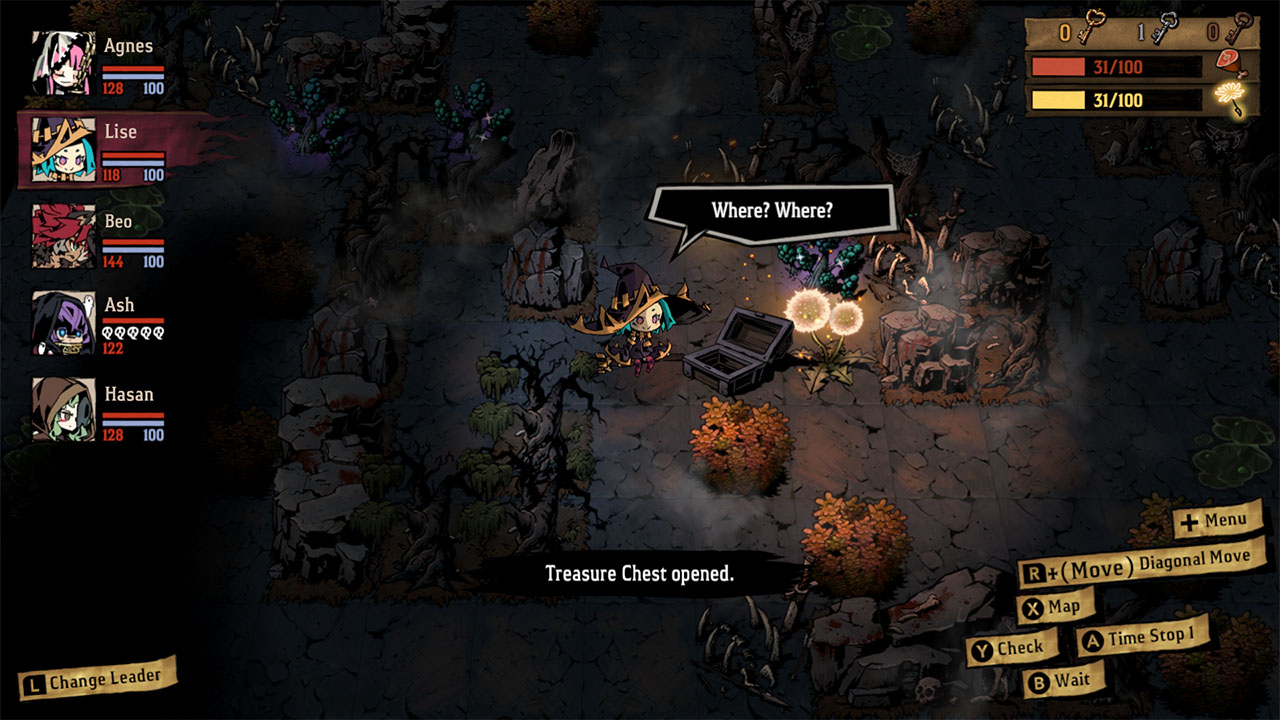 In terms of gameplay, Mistover is simultaneously easy to understand and borderline impossible to figure out entirely. The main gist is that you are in the helm of a 3rd person dungeon crawl in a procedurally generated grid that has a lot of plates that need to be kept spinning. First and foremost, you accept requests from the townsfolk in order to start in on missions, which are needed to progress the game’s storyline and also to elevate the characters you choose for your Crew. Additionally, you then explore the dungeon with several conditions in play to factor your success. You need to find treasure, kill enemies and literally explore every nook and cranny of the floor that you can. Doing so grants you plenty of EXP and loot, but it comes with a cost. As you walk around, you get hungrier and hungrier, so packing food (and being lucky enough to find food) is a given. Full bellies replenish lost HP, empty bellies drain it until your party is dead. Also, there’s a matter of Luminosity, or light. When your light is low, you can’t see as well, you’re more likely to step onto traps, and you’re more likely to break formation during battle. So you gotta keep items on hand to replenish light, but also look for Light Flowers that bloom in dungeons to help you out.

The combat of Mistover is fantastic, taking place on a sideview grid that is turn based and varied in tactics and abilities. The monsters are all tough  (with the bosses being absolutely bestial), delivering a variety of ailments during combat that can be lethal in seconds. You can bleed out, you can be poisoned, you can be knocked back a row and hamper your fighting…it’s intense. On the other hand, it’s also very strategic for the player as you decide the how and why of your format. With a good choice of classes to add to your party (and more that you unlock the further you play), the earlier dungeons let you experiment with Paladins, Sisters (clerics), Shadow Blades (assassins) and more, finding out the right balance of combat, assisting and defensive maneuvers you need. Some attacks need to be performed from a row behind, while others need MP, as well as a couple of character classes that use their own special brand of points (the Ronin has Yo Energy instead of MP). Not only does it take quite a bit to figure out what works best for you, it also has an air of urgency about it: you don’t want to waste time leveling up a character if they aren’t a good fit for you, especially with the Limbo State being an occurrence. The Limbo state is a sort of “near death” that gunks up the combat and leaves you with a crew member that could potentially die, but definitely isn’t helping out unless you have extra crew members at home that can SOS for them.

What makes me a bit crazy about Mistover is the Doomsday Clock, and it’s the same issue I’ve had with other games that involve arbitrary timers (looking at you, Atelier games). The Doomsday Clock is literally ticking down to the end of the world, and the only way to slow it down is to dump every available second you have in the dungeon that you’re exploring. Sure, you can do good things in town like Hire new Crew members, accomplish requests and such, but your dungeon exploring prowess is critically important for your survival. That’s what I mean by “look in every nook and cranny.” 100% mapping a dungeon means the clock moves slower, as well as destroying every obstacle, opening every chest and killing every monster. But, naturally, you gotta worry about health and Luminosity, so you need to pack a ton of food and light items. BUT if you don’t use all those perishables by the end of the dungeon, they get tainted by Mist and end up becoming less effective in the future (or afflicting you with something terrible upon consumption). ALSO you have to contend with the Mist itself, which can, if you walk into the right/wrong areas, change your character. Meaning it can add another ability to them or just, you know, gimp them for the rest of their lives. So on top of having to plan out your character’s levels, still additions, equipment, grid placement and whether or not they’re worth bringing on this particular expedition, there’s also a chance they’ll just die because of a bad dice roll and, guess what, they’re gone forever. 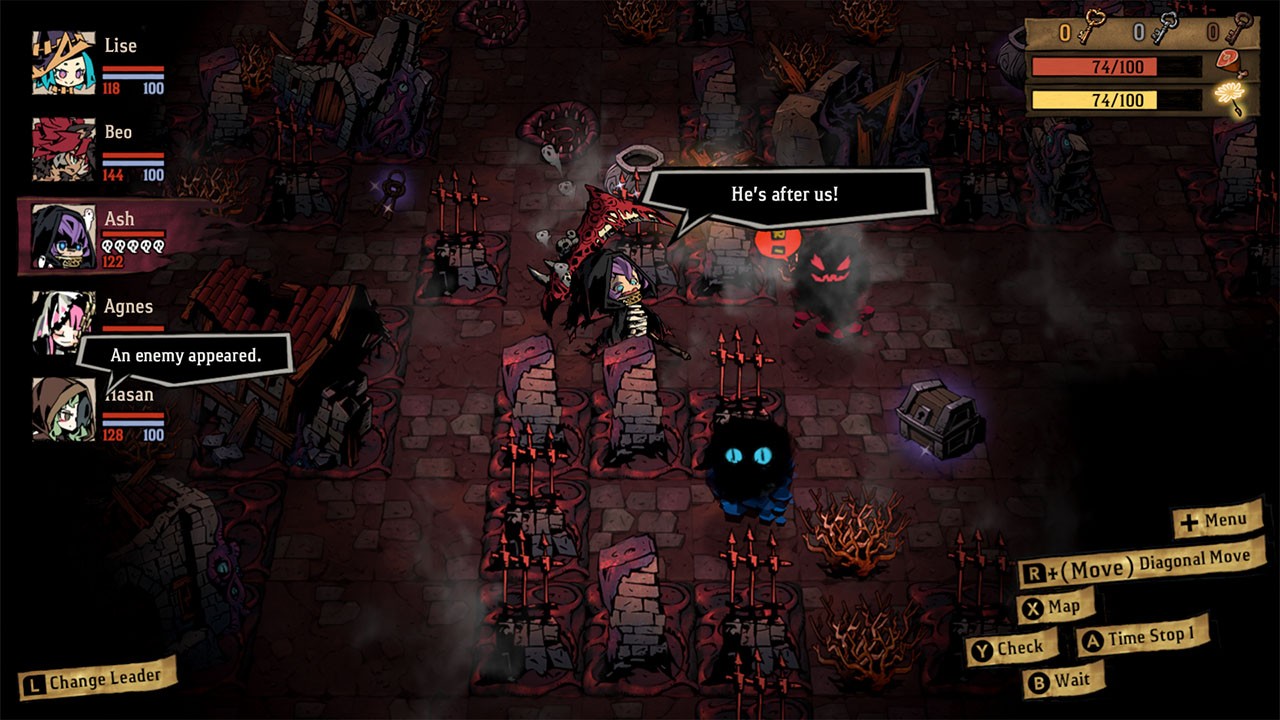 It’s such a shame that the game behaves in such a way, because there’s so much about Mistover that I like. The dungeons are well generated, and the artwork of it all is to die for. The monsters, the characters, even the bushes and rocks have this gorgeous combination of anime and grim, gothic look behind it that the influence from games like Salt and Sanctuary or Darkest Dungeon are apparent, yet it retains an original air about it. The choices of Japanese or English voices are fabulous, and the characters, though a majority of them are only known by their titles, spout out such non sequiturs on the menus and between screens that give them character depth and honest-to-goodness personality that it almost makes up for a lack of individualism. The game is super delightful to listen to and drink in through your eyes, and, when things are goofy (or when you set it to the easy difficulty level), it’s complex and fun to build the world and keep the game moving. Yet that constant, annoying ticking of the Doomsday Clock just takes it right out of “fun” and into “chore.” I might be one of the few that didn’t enjoy Majora’s Mask for this very reason, so it’s of critical importance that you keep that in mind before picking up this game.

That being said, if you’re able to adjust your expectations and manage your stress over the countdown, Mistover is brilliant in design and execution. There’s a lot of customization within the characters of their skill sets, the EQ drops and loot to be found are fun, and the overall world of Arta is a phenomenal one to revisit and kill a lot of time while killing a lot of things within. I won’t spoil the story, but it gets fairly intense fast and keeps you distracted from the grinding-yet-speeding nature of the world. If you enjoyed Darkest Dungeon and don’t mind a deadline, Mistover could be your own next greatest adventure.

If you enjoyed Darkest Dungeon, Mistover could be your own next greatest adventure.