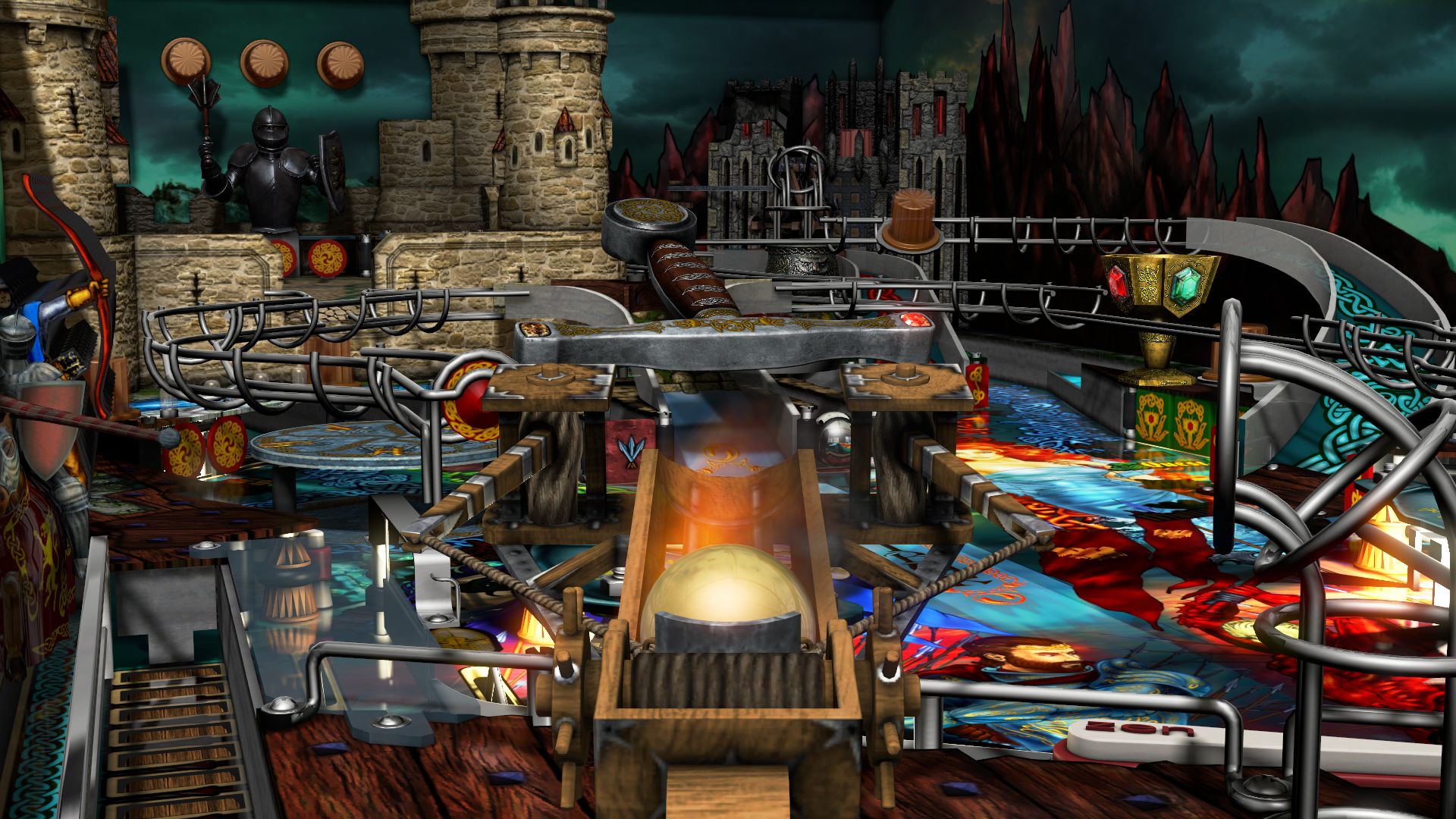 Pinball FX3 had a pretty big start on the Nintendo Switch. Coming out the gate hot, they delivered a bunch of DLC tables right away, included their newest one (the Jurassic World set) and then…just kind of stopped. To their credit, their community managers have been fairly vocal and active, but there just hasn’t been a lot coming down the pipeline since then for their Switch port. Thankfully, there’s been recent announcement that the dedication to the 60FPS handheld patch and the HD dock version, which is nothing short of exciting. So we may be short on ported DLC in the near future, but it’ll be worth it to make sure the core game is at its best. With that in mind, our final DLC pack, The Medieval Pack, is probably the weakest of the bunch, so try to keep a stiff upper lip during the read.

The Medieval Pack is something that feels like it was lumped together by a well meaning teacher who found out two of their students “listen to heavy metal” and decided they would be great friends. But one of them is definitely into hair metal, and the other is more of a symphonic black metal fan, and there’s a small chance there’s overlap but really not much. Still, they’re in the same ballpark, so that must make them like minded, right? That’s how you end up with a five dollar DLC pack that contains Epic Quest and Excalibur on the same ticket, and you scratch your head, saying “well, they both have…swords.”

Epic Quest is a decidedly goofy and offbeat kind of table, dedicated to exploring what you can do with digital entries versus physical entries. The idea is an almost Don Quixote setup, in which a knight of the scrawny variety sets off to do a bunch of quests, like fight wolves and…evil trees. With two and a half flippers (more on that in a second), this table has two distinctive ramps, a couple of tunnels, and the most aggressive ball return that I’ve ever seen. For whatever reason, when you shoot into the back bumper pack, your ball will, eventually, get locked, and then ROCKETED towards the flippers, easily resulting in a ball loss if you’re not ready for it. Your first play of Epic Quest will result in two quick lost balls, so don’t be discouraged if you can help it. 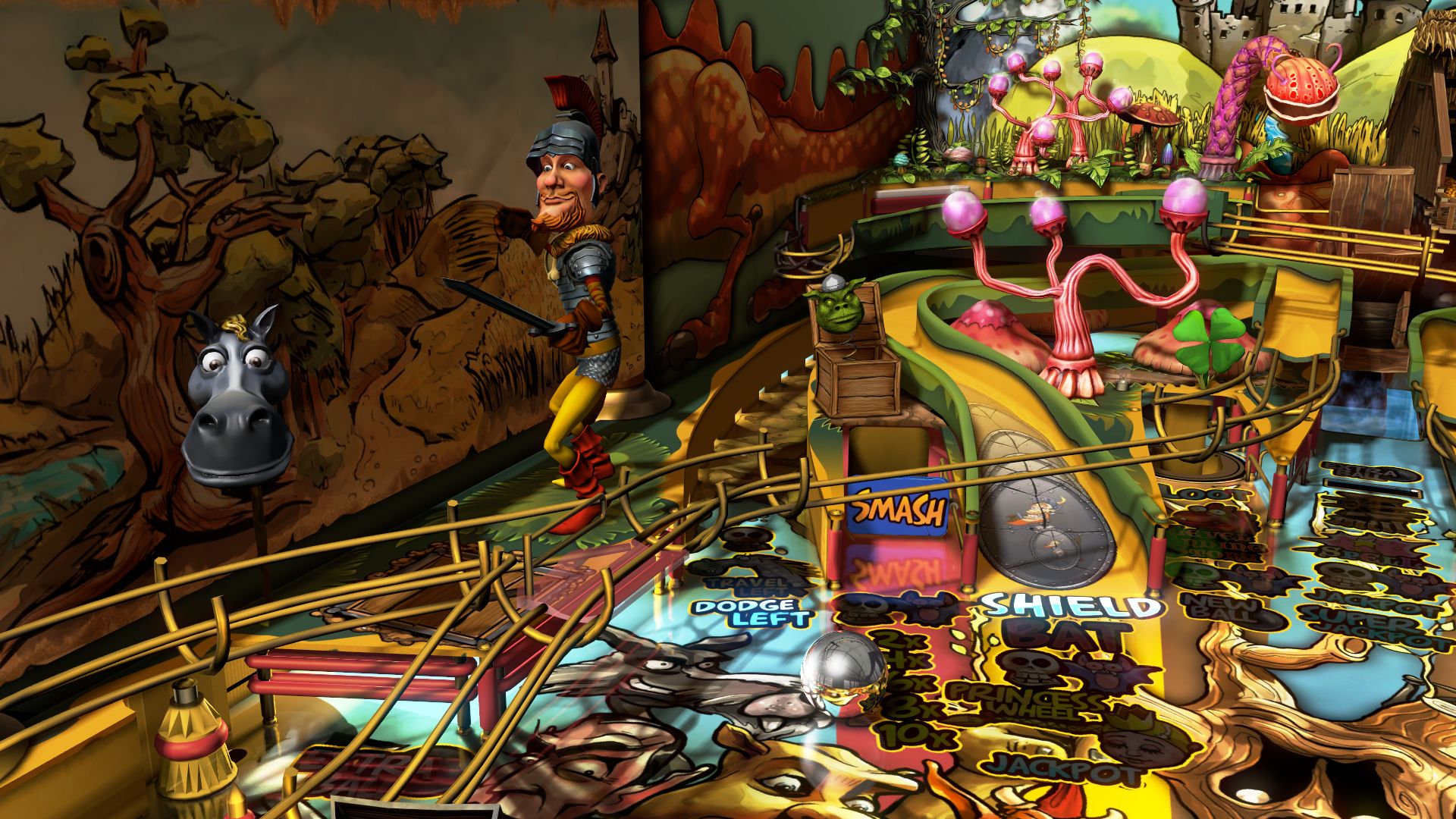 Once you get into the swing of things, there’s a lot of fun stuff happening. The half flipper is a reverse gravity mini table that you launch into at the start of each game and can easily re-access through ramps, and it will result in quite a few bonuses if you can hit the mini ramp right. The missions all rely on fighting things, complete with life meters on either side that showcase how you and your foe are fairing. And the roulette table where you’ll get your ball locked constantly results in a bunch of pretty high paying bonuses and jackpots fast. In short, this is a fun and furious table, and incredibly lighthearted.

My only real complaint from Epic Quest comes from the audio and the constant, blithering narration from our Knight named Max. We get it: he’s kind of a simpleton who’s mostly being a knight in order to get loot. But he just spouts so many expected, trite sayings over and over that you can’t help but mute the audio. It reminds me of when Jay Sherman’s cardboard cutout kept proclaiming “Buy My Book!” It’s no wonder someone shot it, and so I needed to turn off the speakers before I found my gun.

Excalibur is on the other end of the spectrum in a very, very real way. Excalibur is entrenched in Arthurian influence, from the design of Camelot in the backdrop to the way Merlin is portrayed, which feels more genuine than certain muscle bound and swave versions I’ve seen in made for TV movies. The purpose of Excalibur is to gradually unlock quests and events related to the Knights of the Round Table, extracting the legendary sword itself and defeating Morgan Le Fay when she rears her ugly head. It’s all presented in a beautiful table that’s quite dark but not poorly lit. Compared to something like Castlestorm (from the Iron and Steel package), this one is incredibly elegant in how it opens and reveals a lot of the sections, which is interesting because it does get damn hard to see your ball. 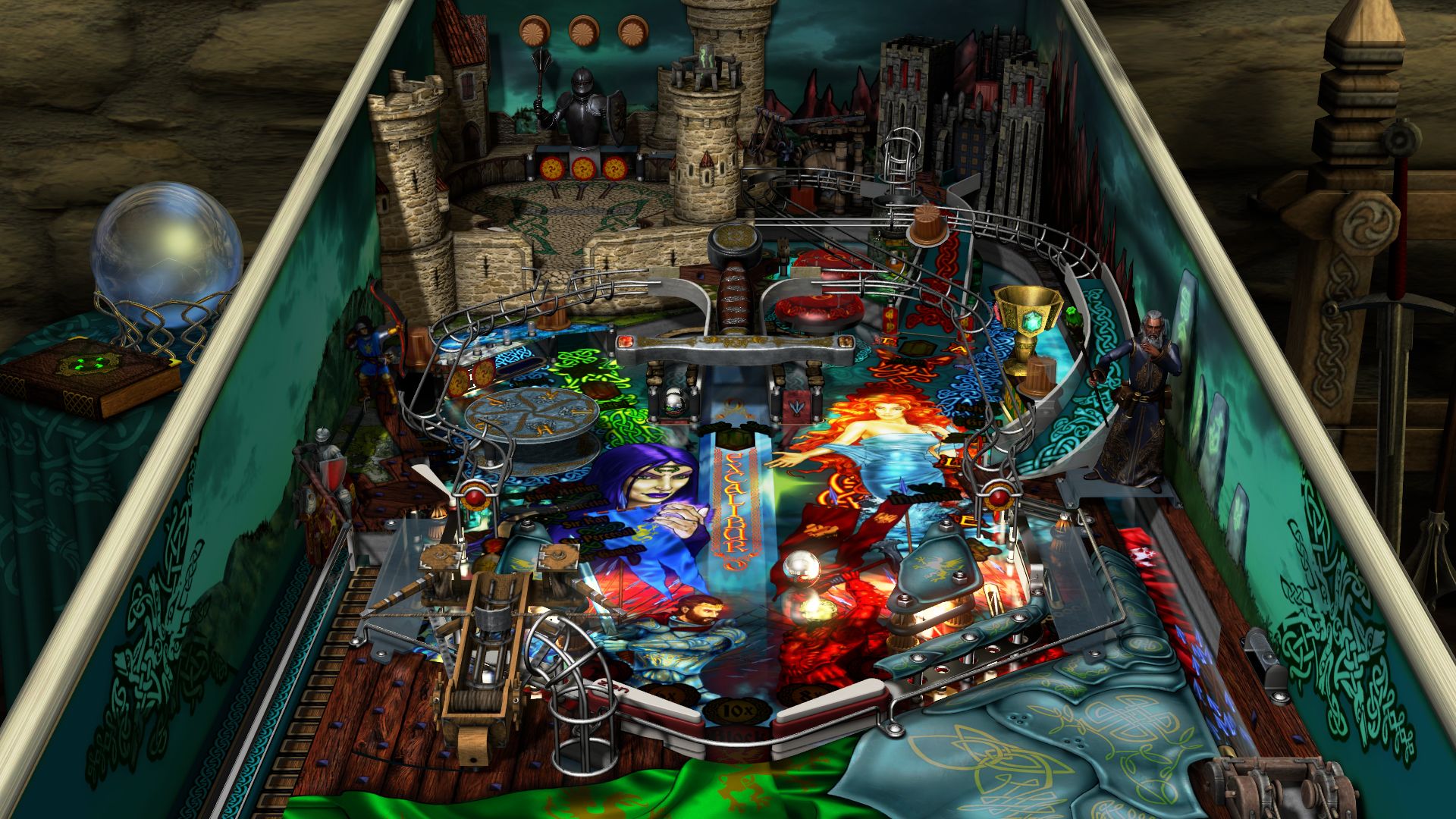 The table is peppered with items, like the aforementioned Camelot and a massive Excalibur “straight ramp” that sits smack center. The result, unfortunately, is that your viewing window for where the shots line up is pretty small and focused. You’ll spend a lot of time with the ball out of sight, and you need to trust that you remember the exit points in order to line up the return shot best. Most of the time, left looping hits won’t go near the third flipper, but there’s a one in five chance that it’ll be in alignment to nail the flipper and get the multiplier on the far right. Getting it straight up Excalibur is a feat, especially with buffers on either side of the ramp that allows zero room for error. And all of this is still in preparation for the quests that really take a lot of hits to set up and then even accomplish for, compared to Epic Quest, incredibly low points payoff.

But I loved the atmosphere of Excalibur. That’s the magic of Zen: making something that’s incredibly modern feel like a classic table by carefully replicating the things you liked (good light placement, fair bumper and ramp separation) and removing the things you hated (stuck balls, wasted quarters). This is a table that I like to return to simply to kill time. It’s got that right vibe to it that you’re sitting in the pizza parlor after a good lunch and just enjoying the table magic. That’s what makes Excalibur great.

Overall, the tables themselves aren’t bad, not by a longshot: Epic Quest is fun and frantic, Excalibur is more relaxing and, at times, lethargic. But it’s like getting the “Swordplay Video Pack” and ending up with three episodes of Galahad and the series finale of Legend of the Seeker. It’s tangentially connected, I guess, but they don’t fit well together at all. I think they should have been separated, baked into another set and then they’d have a happier homelife. Instead, set together, you should really consider what kind of player you are before dropping into this peculiar duo.