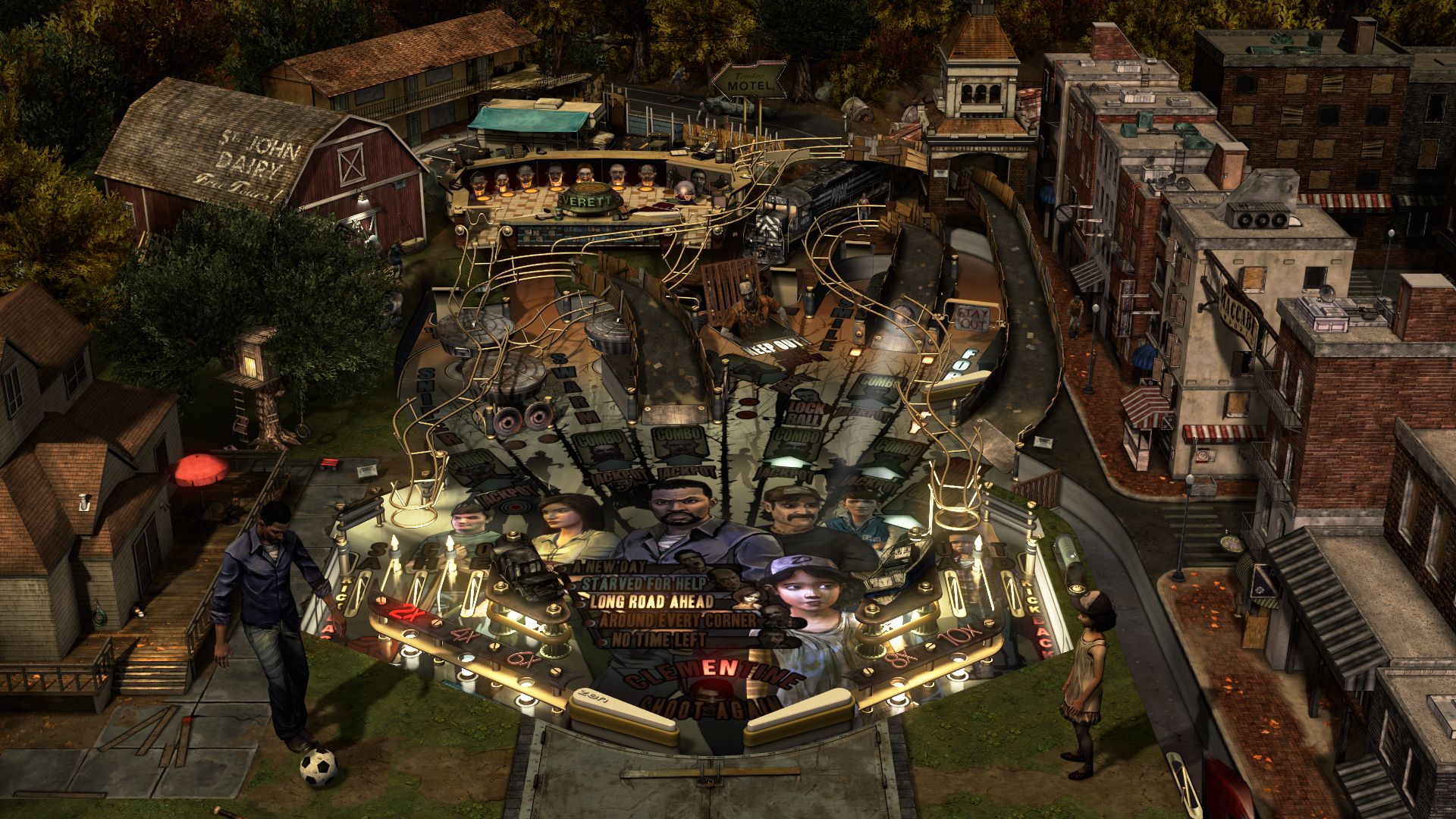 Zombies, man. For some people, the entire zombie phenomenon has completely played itself out, and not without good reason. What started as a resurgence in the classic John Romero style has now gone completely over the top, and zombie culture is up to its brains in literature, fashion, music, food and games. Unfortunately, the television show that became the definitive centerpiece, The Walking Dead, has, ironically, continued to shamble on, in spite of many people saying it’s been dead for seasons. The games, on the other hand, evolve and change in many ways: some are obvious cash grabs from AMC that shoehorn characters into pay-to-win trash, but some have been downright amazing. Anyone will tell you Telltale did a fantastic job with bringing some endearing and memorable moments into The Walking Dead through their episodic storytelling, and, now, you can experience the first season in a bold new way: pinball.

Zen’s Pinball FX3: The Walking Dead is a standalone, singular table, but don’t let the lack of variety put you off of this DLC immediately. First and foremost, this is based around the superior game series, so former fans of the show need not get on their high horses and run away just yet. Secondly, much like some of the other movie and game based tables, Zen has made sure to incorporate elements of all five chapters from season one into this particular setup. If that doesn’t sound intriguing, did I mention this is zombie pinball, made by Zen, with a massive amount of replay? C’mon, you know you’re curious. 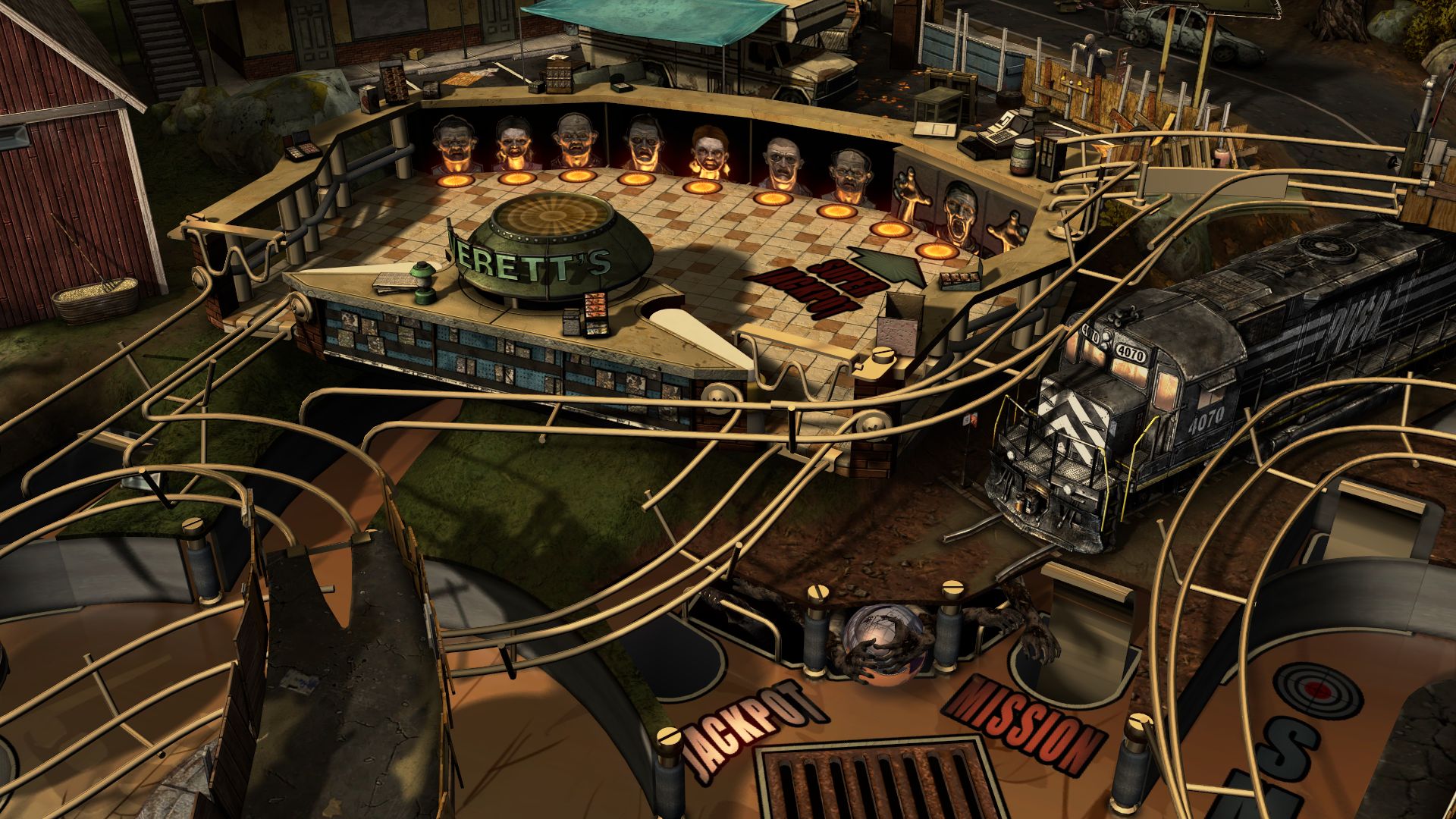 Set up as a mid to large stage table, most of The Walking Dead focuses around one particular element: a single zombie that’s stuck in the center right of the stage. This zombie, believe it or not, will be your be-all-end-all in terms of moving the game forward to anything more than a simple bumper and ramp romp. The zombie acts as a guard to activating each of the missions, and he needs to be struck three times before he gets out of the way and you can take a fourth shot to start up the mission. Zen has actually made it so the 3rd flipper (affixed to the right) is incredibly convenient in hooking in deadshots to the aforementioned zombie. It’s such a level of awareness and support that I almost couldn’t believe it at first. Rather than having the third flipper just be ornamental and occasionally scoring some good target bonuses, the flipper actually makes the game work! How wild is that?

Each of the missions is timed and based on one of the chapters from season one of Telltale’s The Walking Dead. Whether you start from A New Day or jump directly to No Time Left, you’ll find that these missions take on very interesting tones as Zen has made a serious point to consider the way the original games themselves play. Upon selecting a mission, you’re presented with an either/or situation that’s based on actual choices from the games. Deciding one or the other then tells you what your mission is supposed to be; trust Lee or don’t, help Clementine or let her go off on her own. Each of these decisions focuses your mission onto a different area, and each is a surprisingly good match to the target objectives. But the missions also spring up if you cannot strike down the zombie, but they become a bit more fundamental (kill walkers, find food, etc.). All in all, it’s actually a pretty genius setup in terms of missions.

Design wise, The Walking Dead has some pretty simplified ramps and saves, though I will admit that the far right ramp that leads into a mini-table is something to behold and a great target to aim for. Due to the weight of the ball and velocity, you may find that a late fire combined with a careful nudge is the best way to get into this upper area that a.) is needed for some missions and b.) has fantastic multipliers. As always, exercise caution when getting into nudge territory, because Zen is most unforgiving to tilters. 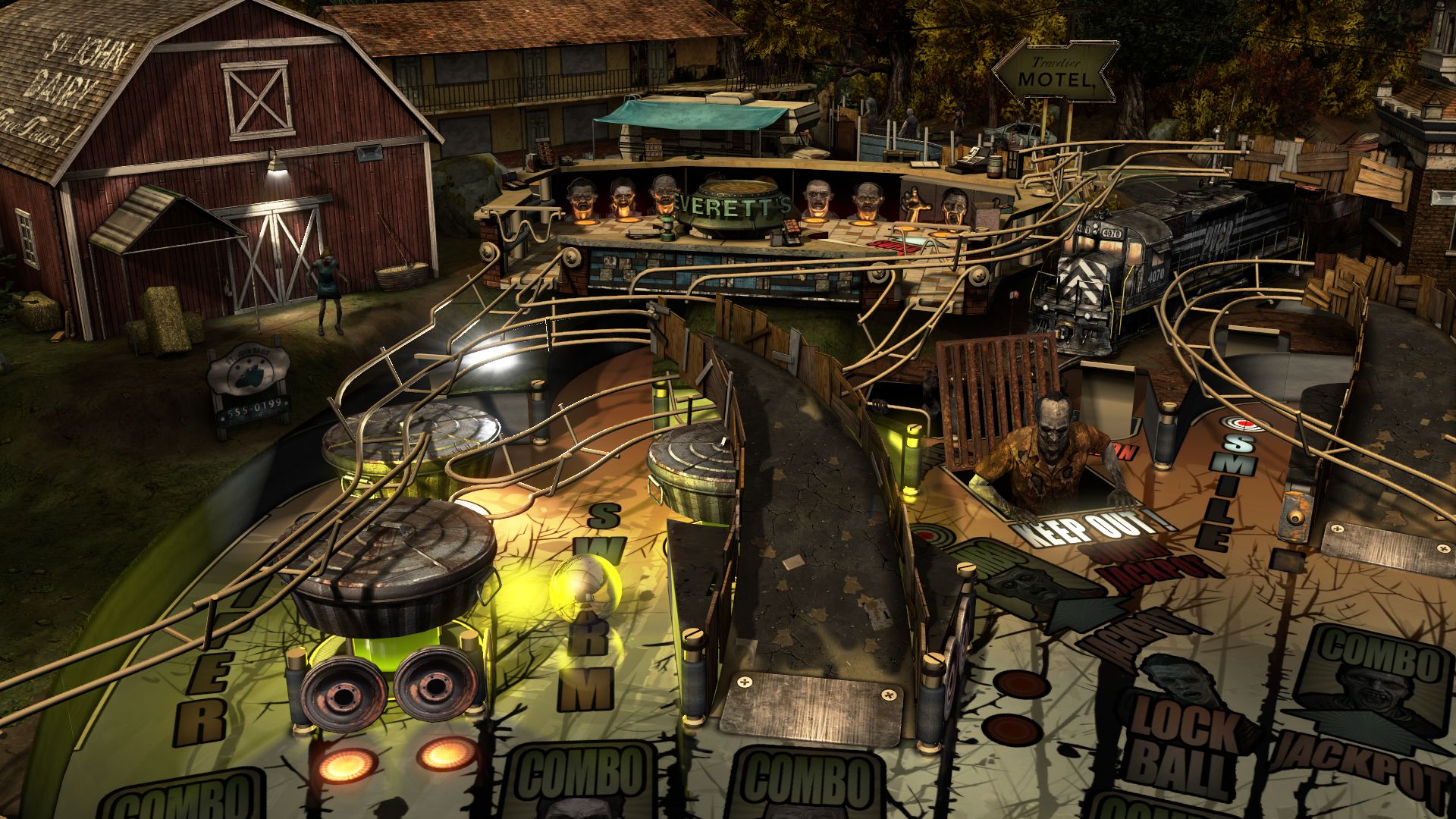 Lastly, make sure that, should you embark on this table, you either have already played through Season One of Telltale’s The Walking Dead entirely OR have no desire whatsoever to play the game. This is because the missions and the table itself is rife with spoilers, as it assumes that you’re here because you were a fan of the game. Nothing is so glaring and shocking that it would upset a player, but, if you’re currently going through the missions, you may realize that you’ve stumbled upon a revelation that might be better enjoyed when you’re not trying to lock down a multi ball. Then again, that is a hallmark of a pretty damn good table: it’s got enough from the real source material to make it a spoiler for newcoming fans.

The Walking Dead may be old news in terms of graphic novels, television shows and the current, apparently less-than-great episodic game, but I’ve never played the pinball table before, and it’s damn good. I do hope that Zen considers porting future tables for other episodic adventures, because I can easily see this working for either season two or, better yet, another Telltale saga. Sam and Max pinball, anyone?