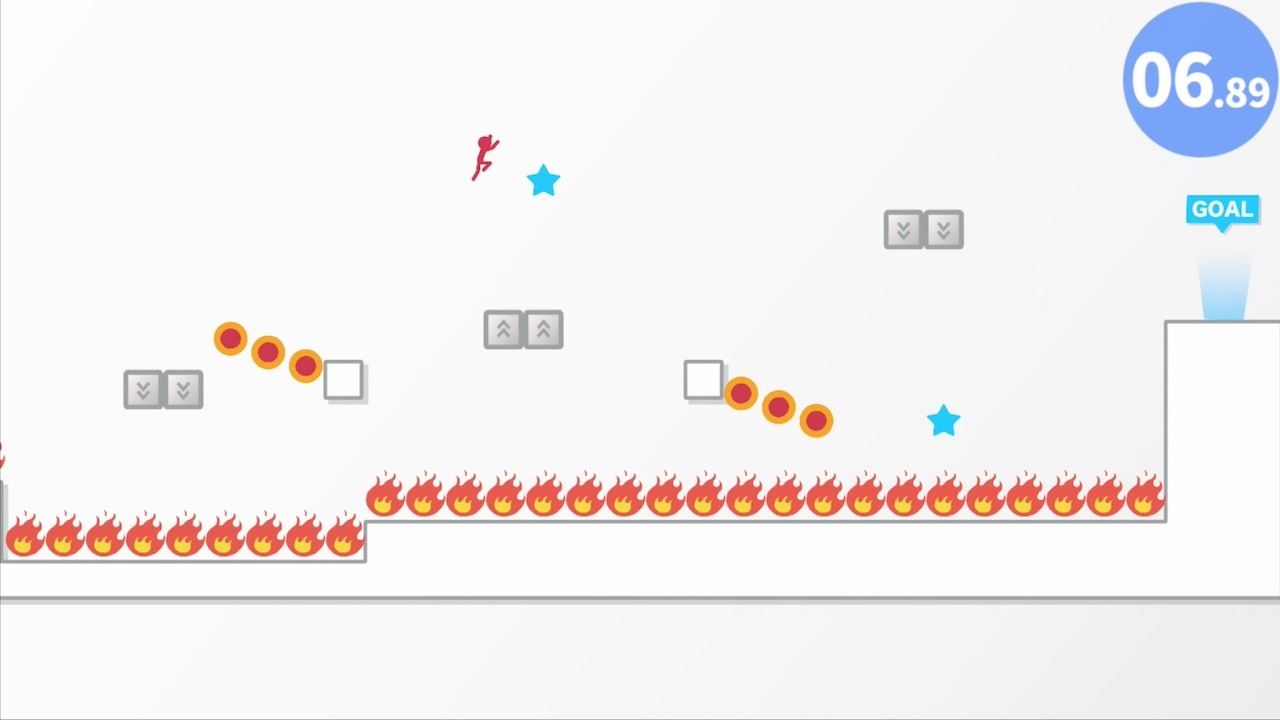 10 Second Run Returns is, apparently, the sequel to the modestly popular DS game, 10 Seconds Run, which several of you will have no idea about because it was a DSiWare game before the 3DS eShop was even a thing. The objective is in the title: you have ten seconds to guide your stickman hero across a small map of pitfalls, obstacles and general baddies in order to reach your goal. Along the way, you have the option of picking up blue stars, three per level, and you need these stars. You NEED them. Because that’s how you unlock more levels and get even further. Also how you can unlock a bunch of fun, different characters that don’t do anything differently, they just look awesome.

First and foremost, I hope you didn’t come here looking for expansive narrative and an amazing storyline, because why the hell would you. The object, idea and quest for the entire game is right in the damn title. You have ten seconds. Get to the goal. Not everything has to be about becoming an apprentice witch, scouring the wasteland for food or finding your long lost family. Get to the goal, it’s really that simple. Oh, and pick up some stars along the way, because why the hell not.

Since there isn’t much to look at in terms of plot, let’s look at what 10 Seconds Run Returns does best, which is gameplay. This is a perfect example of a simple idea that’s been hammered, tempered and really made into the best shape possible. The first few levels are easy: so easy that you might be lured into a real false sense of security. Just get to the goal, it’s not a difficult concept to grasp. Along the way, grab those blue stars. Cocky players will even be able to grab the stars at a run, not slowing down for much. This is important in two different ways. One, it teaches the player that they will want to have the “dash” button pressed down almost the whole time in order to maximize their speed. Two, it teaches the player a valuable lesson in humility once the first set of levels “unlock” and the game really gets going. 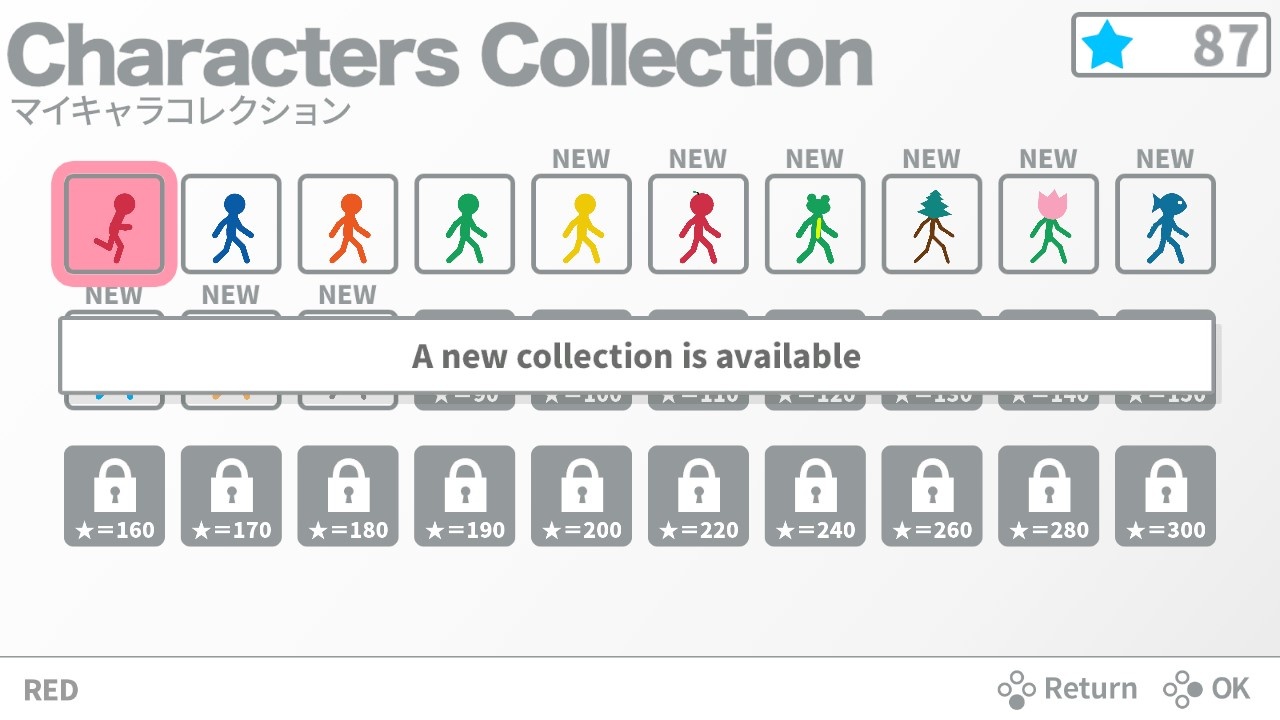 10 Seconds Run Returns allows the player to reward themselves by unlocking new levels through star collection, which now builds a drive and dependency on getting those stars: wouldn’t want to run out of game to play because I was lazy or a bad player, now would I? However, the game slowly starts turning up the heat, both metaphorically and literally. Fires start, which need to be jumped over or otherwise avoided, and you think “alright, makes sense.” Spiky opponents appear, shambling in one direction, and you need to jump them like the Spiny turtles Lakitu threw once upon a time. Then both appear in the same level at the same time. Platforms start disintegrating the second you touch them. Moving platforms. Spikes. Massive spiky dudes. The game keeps turning up the heat until you suddenly realize you need to navigate a path literally made of fire while trying to avoid a flying spike from going up your ass. And it hits you: this game is hard as nuts.

What really makes it pop, though, is the fact that 10 Seconds Run Returns doesn’t hamper you too much, but it does take you down a peg from where you started. There’ll be several stages that, through trial and error, you have to beat by dying at least once to figure out where are the safest places to run, land and jump. So it’s certainly not a game that tricks you and punishes you, but it is one that keeps your ego in check. Once you die a couple of times, you understand that the game isn’t random or chaos, but has a clear path that you can follow to victory and still get all those stars. Sometimes you need to abandon one and come back later: this sucks, but what can you do? You gotta keep moving forward. Perhaps your an instant completionist and can’t bear the thought of going to the next stage with anything less than a gold medal. Fair enough, but you’re going to drive yourself crazy in the process. Move forward, have a couple more levels under your belt, then come back and see how easy the old worlds feel, it’s much more successful in that fashion. 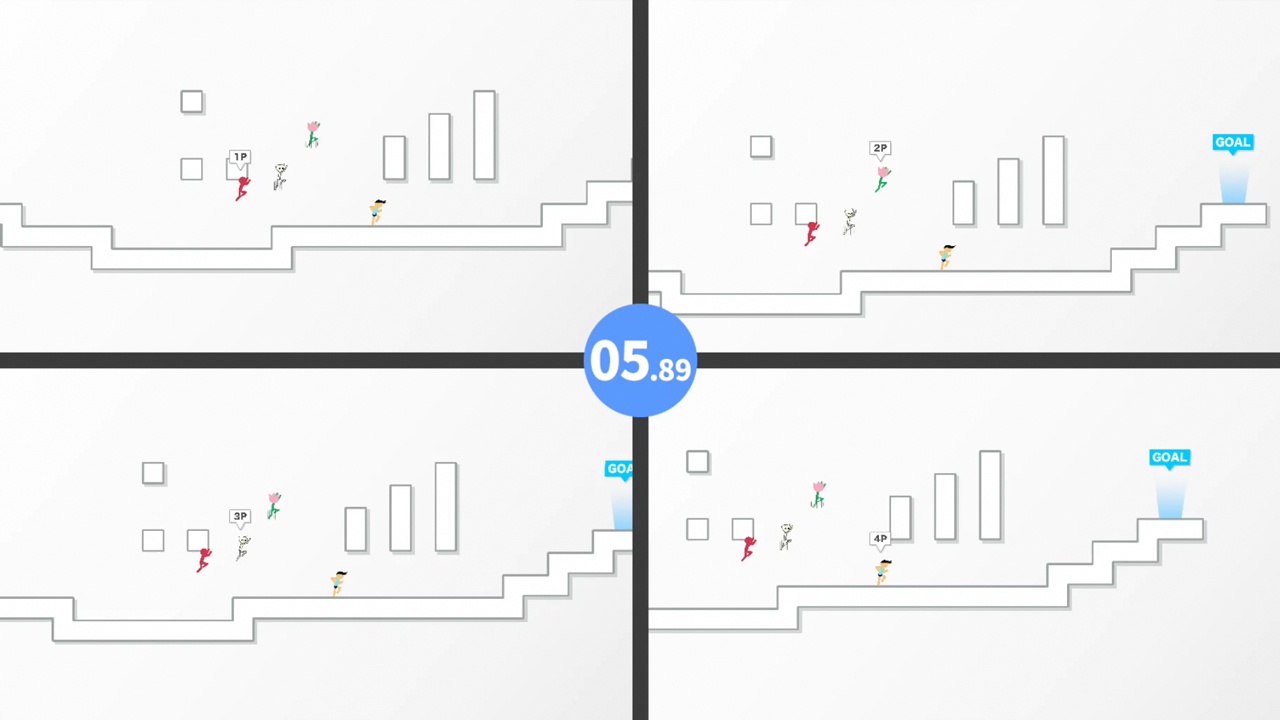 Once you get some plays down, it’s time to bust out the multiplayer mode, which both works and sort of doesn’t. You see, the great part about 10 Seconds Run Returns is that the levels have two clear pathways: the easy way and the complete way. If you’re interested in getting all the stars (because of course you are, you’re an addict now), you gotta make sure you take the hard way to collect all the shiny things and make your life complete. However, if you just wanna get to the goal, then there’s usually a clean path that you can find. In the Versus and Battle Royale mode, you just gotta get to the goal first. So, if you’ve played a level before in any capacity, you know what to do, and you’re gonna win. There’s no shoving or banana peels or whatever, just whoever gets there first, and it’s possible to have two players cross the finish line at the exact same time. You’ll find a lot of those difficult, maddening levels are much easier without needing to grab stars and just be faster than your friend. But it is fun, and the Battle Royale is actually hilariously hectic up on the big screen (and damn impossible on the small screen, which the devs strongly recommend against).

Combine these simple but tight ideas with a full soundtrack that sounds like world is crashing down around you, and you get a game that’s incredibly well oiled, shockingly simple but utterly fascinating. 10 Seconds Run Returns took an already good idea on the DS and pumped it full of steroids to bring it to the Switch in some serious fullscreen glory. It may not even come close to competing for game of the year, but I can admire and appreciate the work and effort that went into making this the best damn game possible for this concept. If you’re at all intrigued by simplicity that’s hardened into diamonds, then you owe it to yourself to try 10 Seconds Run Returns.