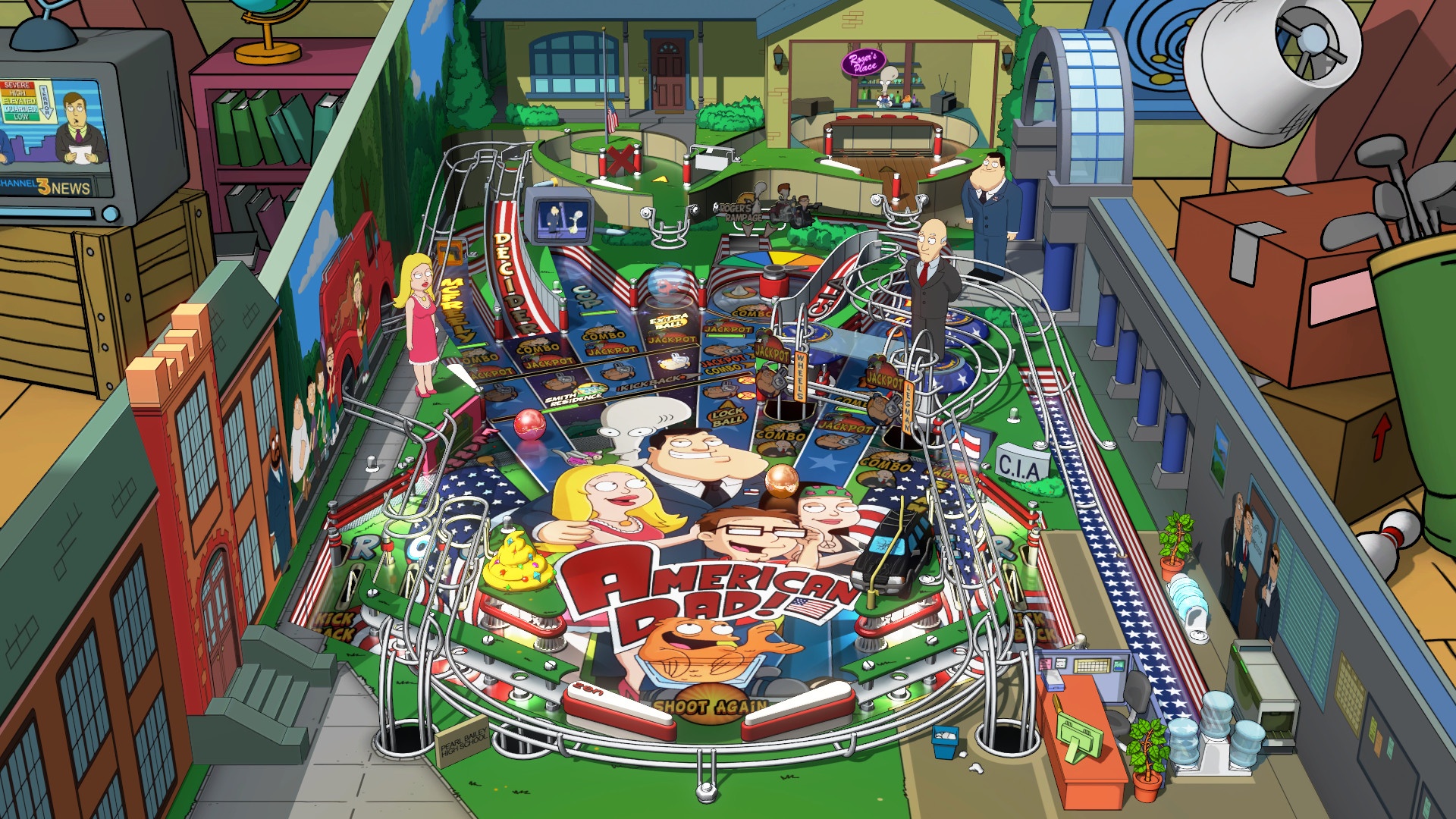 Ah, Balls of Glory. This DLC expansion for Zen Pinball FX3, which is done with a pretty heavy hand (and blessing) from the folks at Fox is the pinnacle of what has finally happened in terms of promotion for your product. For those who don’t know, Balls of Glory is a take on FOX’s own line of fairly interesting and wildly successful “adult” animations, which should be crystal clear to anyone who’s watched public television since 2002. There was a time when cartoons were first for kids, then for adults, then only for kids again,and now we’re back to having separated cartoons for everyone. I certainly don’t mind: I wouldn’t want my kids watching Golden Boy with me, because it’s absolutely, 100% not for anyone under 18. But adult kids like video games too, so FOX decided the four best titles to work with would be Family Guy, American Dad, Bob’s Burgers and Archer. Of course, at the time of this writing, American Dad has left FOX and been sold to TBS, but let’s not split hairs: let’s just agree FOX sold the best cartoon it had in its stable and be done with it.

Right up front, this DLC set is 100% for the fans and fans of this particular kind of animation only. The tables themselves, as we’ll soon see, are of varying quality and design, but one constant throughout is the presence of the characters and their catchphrases. Everything that you hear, from the eight voices Seth McFarlane does to the two or three of H. John Benjamin, is pre-recorded and extracted, sometimes apropos, from existing episodes. This is a quote game, and you’ll hear famous and recognizable lines either a bit or way, way too much, depending on your success and which table you play. If you hate hearing Stewie making saucy commentary or if Mallory’s screaming gets to you too easily, skip this package entirely. Otherwise, let’s head on in to the FOX situation. 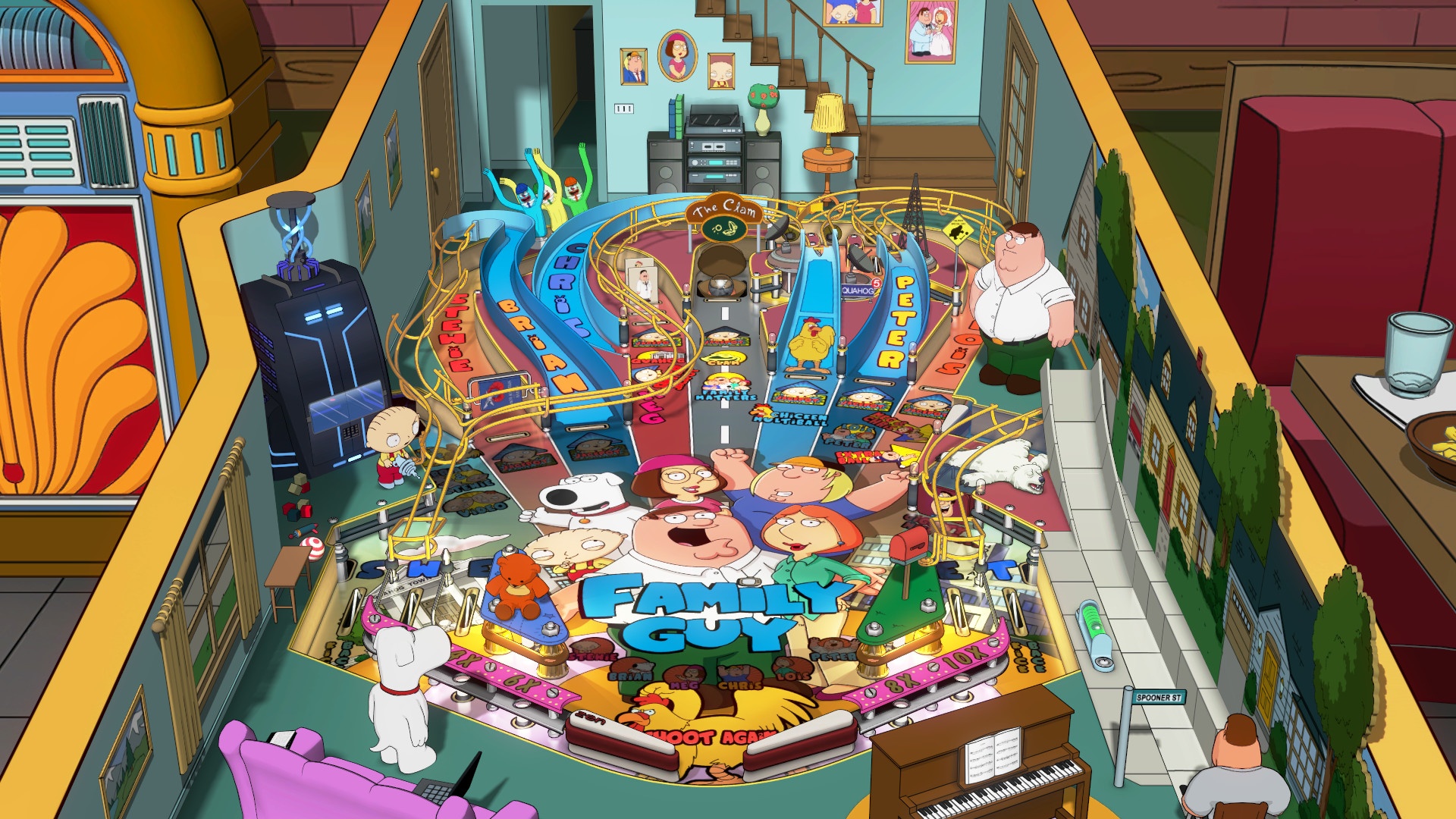 The lowest table on the totem pole is Family Guy. Now, Family Guy is easily FOX’s most successful animation after the Simpsons, and I’m sure the asking price to license that yellow juggernaut was way beyond what anyone could afford. The Family Guy table strikes players in two distinct ways. First and foremost, this is such an underhand toss of a table that it’s ridiculous. Every single ramp is ultra accessible, and you’ll be nailing shots, targets and bumpers with absolute ease even if you’ve never played a single game of pinball before. The ball save timer runs for quite a while, and all the quests that you unlock revolve around something fairly simple and easy. This isn’t a bad thing: sometimes having a more relaxing table is good, helps break up the madness that came after all the stress from the Aliens movies. But the second swing is that this is the most talkative table, and that’s where it loses me. For most of the other tables, you get sound effects and speech clips only when you activate, succeed or fail at the missions. Sometimes when you lose or save a ball. But it felt like Family Guy was talking. Nonstop. For everything. I heard the whole cast spout the same lines over and over to the point where I wasn’t sure if maybe my ball was stuck and I had activated multi ball without realizing it. There’s some pretty fun animations from the characters on the side (Stewie has his old-form, trademark ray gun) and the inclusion of so many lines from Dr. Heartman actually made me pretty happy. Still, it can get annoying fast, so make sure you haven’t watched the show recently before playing.

Second on the list is Bob’s Burgers, which pains me just a little, because it’s dynamically different from the Family Guy table. Bright and colorful, Bob’s Burgers is a powershot table, requiring a lot of good angles and perfect strikes to make it up the far left ramps and more than a few precision shots for the right. This table does speak a whole lot less, and the animations (Bob’s kitchen on fire, Gene doing a little dance) happen more frequently. The inclusion of a lot of the quests being based around the idea of the show and not necessarily plot points was nice: a frequent mission was getting rats out of the kitchen, which never happens in the show itself but is heavily implied in the opening. Definitely something for the fans, but the design is also one that’s going to call to pinball enthusiasts specifically because of the very tricky setup regarding some of the bumper placement. This table could easily be imagined in real life, and having solid creation that leads to believable physical placement is pretty key. I would love if Zen would contact Stern and see if something could be done, I’d drive all the way to Michigan to play it.

Number three was a hard call, but I have to ultimately give it to American Dad. American Dad’s table is set up in an easier fashion, but also has quite a few bizarre choices, such as a drop down chute that loops from the right to the left flipper along the bottom of the table. This can easily and often lead to confusion about where the ball is about to appear in handheld mode, so make sure you run this table docked only (or at least with fresh contacts in). The targeting for activating different missions is a lot simpler than the previous two tables, with Klaus’ fishbowl being front and center and missions starting after three quick whacks, which can be lined up and achieved without much thought. On the fan base side, I would say American Dad does the most amount of “true fan” pandering than any of the tables. While the other three are mostly generic in their mission setups, almost every American Dad mission applies to specific plot points from the show, such as the Tearjerker parodies, or the street racing episodes. Roger, when he pops up as a target, uses different costumes, like Ricky Spanish or Hailie. And, as a result, the sound bites tend to apply more to the missions and, as such, feel more natural and actually suited to the game as opposed to “these clips were grabbed off of YouTube most.” As a big American Dad fan myself, this was easily my favorite, but I recognized the inherent flaws of repetition that made me dislike the Family Guy table, so fair is fair. 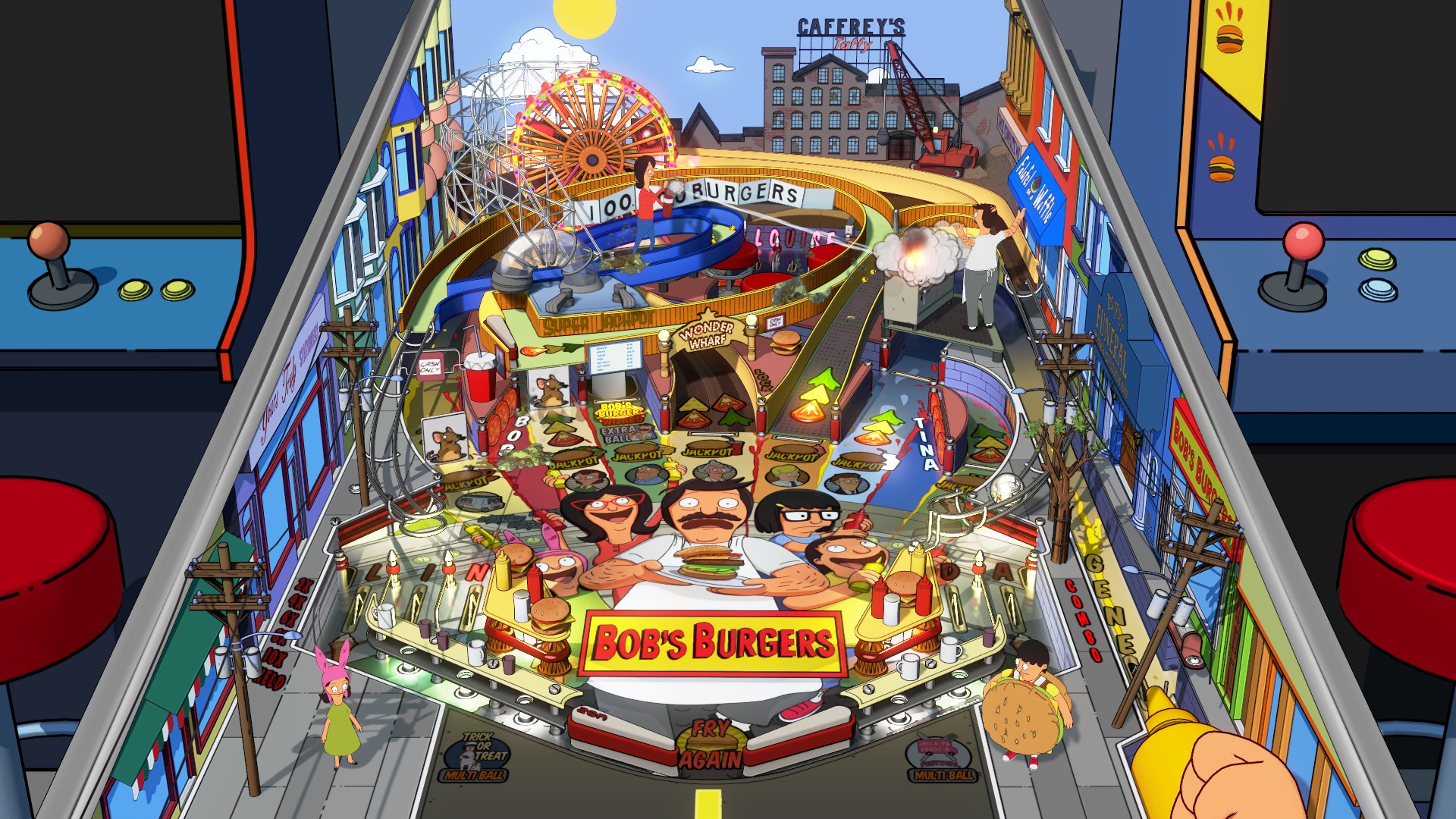 The best table is easily the Archer setup, which feels like it could have been in a pack all by itself. Archer has a massive story frame that’s now gone for eight seasons and can be tracked from start to finish in different homages and plot lines. The table here is a speed table, very small and crunched, but meant to unlock and set things up as quickly as possible. The characters of Lana and Archer are easily visible, and the launcher is the gator from several bayou themed episodes. When you get moving, the ball doesn’t want to slow down, and there’s a third flipper that helps keep the ball in the upper register for higher bumper tallies. When missions are activated, they’re significantly more dramatic and dynamic than the other tables. In one, Archer suddenly drove his car across the table before the top board flipped down to reveal a sequence of him in a fist fight on top of the train. I had to knock the targets and keep the combos up in order to win, otherwise, I got sucker punched and lost the bonus. It’s got this fast pace to it that really sells the entire environment, and the sound bytes are actually some of the less popular ones, with “Danger Zone” only coming up after some really great mission completion. The biggest letdown, I’d say, is that this could easily have been the first table in a specific Archer trilogy, with the others focusing on Archer Vice and the Noir episodes. Still, as a standalone, it’s really damn good.

As I said up top, this is for fans of the FOX animations and those alone: pinball fans could find just as much quality with fewer quips in order DLC. However, if you’re really into the shows and want to keep it going with a game that isn’t mobile trash, then grab these Balls of Glory and get ready to shoot wildly around.