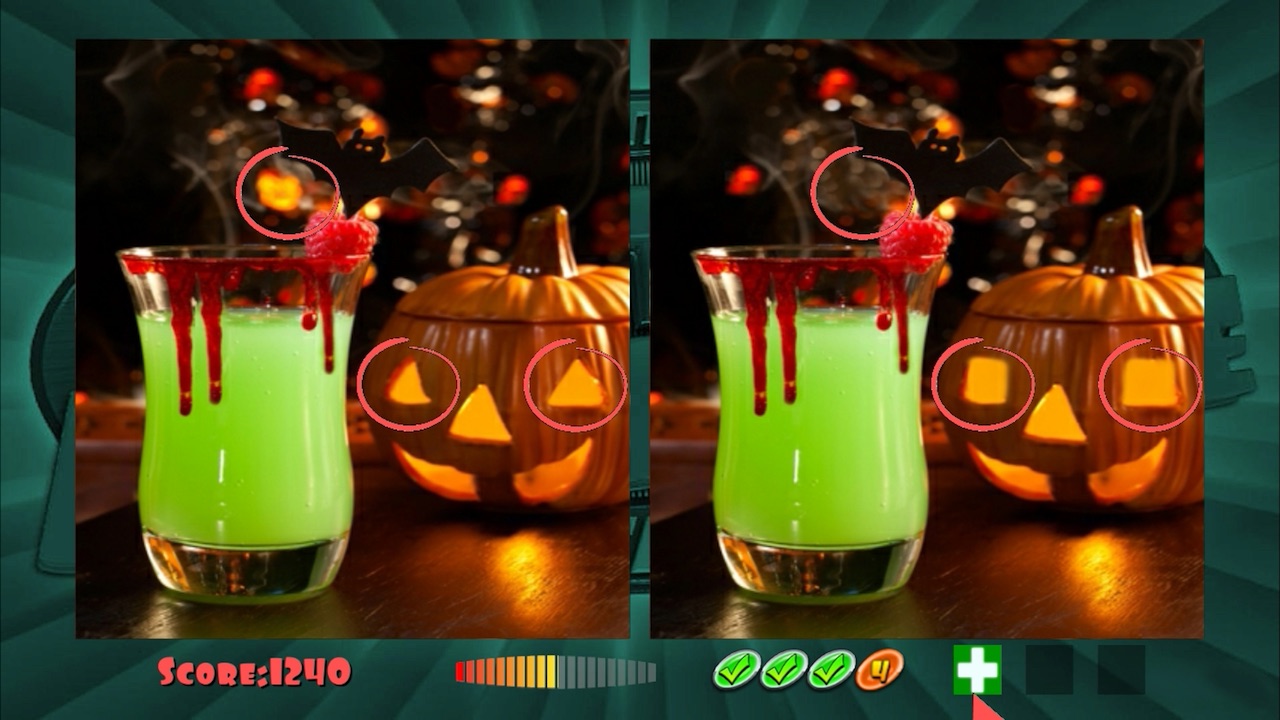 Spot the Difference seems like what happens when you have a pretty standard idea and no creative juice to come up with an original title or even great execution on the core concept. Many of us grew up with either Highlights magazine or at least an elementary school worksheet where you had two almost identical pictures with a small number of variants between them. Your objective is to find the ways that the two photos differ (like the man’s hat color, or the number of corn dogs the boy is holding). In any case, it’s a classically enjoyable activity, and I guess Sabec thought it would work on the Switch. Which, I mean…it works. Kind of.

The way that Spot the Difference works for the Switch is either in a docked mode with Joycon controls or touchscreen madness, which, theoretically, is the better choice. You’ll be shown two pictures at the same time. You need to find all four differences. Four. Once you find them, you move onto the next picture. If you guess wrong, it depletes the timer faster. If you fail to find all four, that’s the end of the game, enter your high score and call it a day. If you really want to, you can do a two player competition to see who can spot the most differences, and you can only do this with two controllers paired. If the system doesn’t detect at least two controllers, then the option isn’t available, which I admit is a nice bit of engineering.

Four may seem a bit low, and to be honest, it is. There won’t be many instances where the differences are so fine and small that you’ll be hunting too long, so doing four seems, well, ridiculously short. I was trying to figure out why this was, and then I started up a second game and got the same photos but with different differences. Aha, replay value! There was careful consideration that people put in to maximize the ability to keep this game going. By having the differences all pulled from a pool, chosen at random and then thrown in, you can keep em coming back for more. 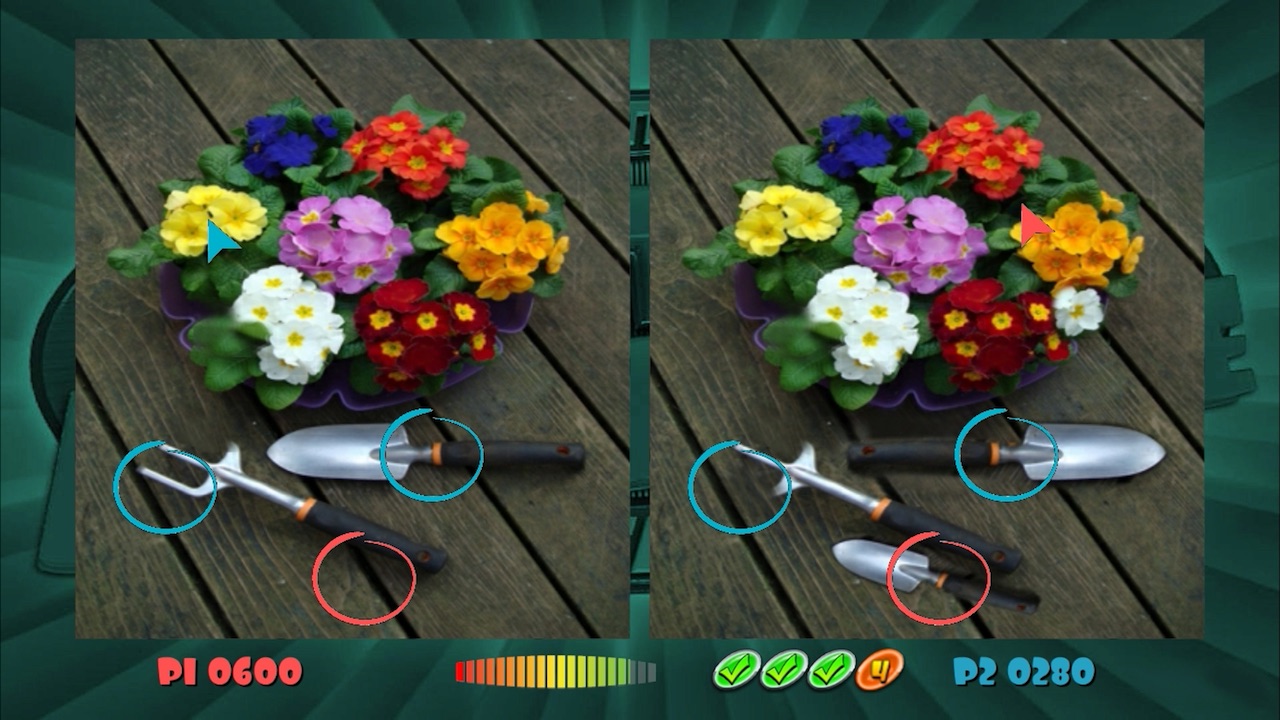 The two player mode is kind of fun, because the cursors aren’t that fast and you end up racing your friend/loved one to circle the one owl that doesn’t have eyes. The problem is the control setup. In two player mode, you move about with the joystick, click with your respective A button (or right control button). Fair enough, whatever. If you start playing solo in handheld mode and remove the Joycons, you navigate with the left joystick and confirm with the A button. Awesome. But if you start a game in docked mode, you move with the left joystick and then confirm with the control button. What? It’s incredibly bizarre that, if I wanted to use the standard, sensible button configuration, I’d have to start undocked and then dock myself. I don’t entirely get it, maybe it’s a bug? There are zero settings to alter or change, so it’s not like it’s something I can do myself.

Additionally, I didn’t care for the music and sound effects at all. While you play Spot the Difference, you have to deal with a very repetitive and simple dance loop, which isn’t really the music I envision while trying to concentrate and spot the differences. If you get it right, there’s a little positive chime, and making a mistake gives you this dated, 90’s “splat” sound that just dregs up memories of cheap sound effects from simple Flash games. Finish the puzzle to get a harp strum and then move on. Honestly, it’s so cheesy and repetitive in terms of music that it’s better to simply mute the volume and just keep an eye on the time. 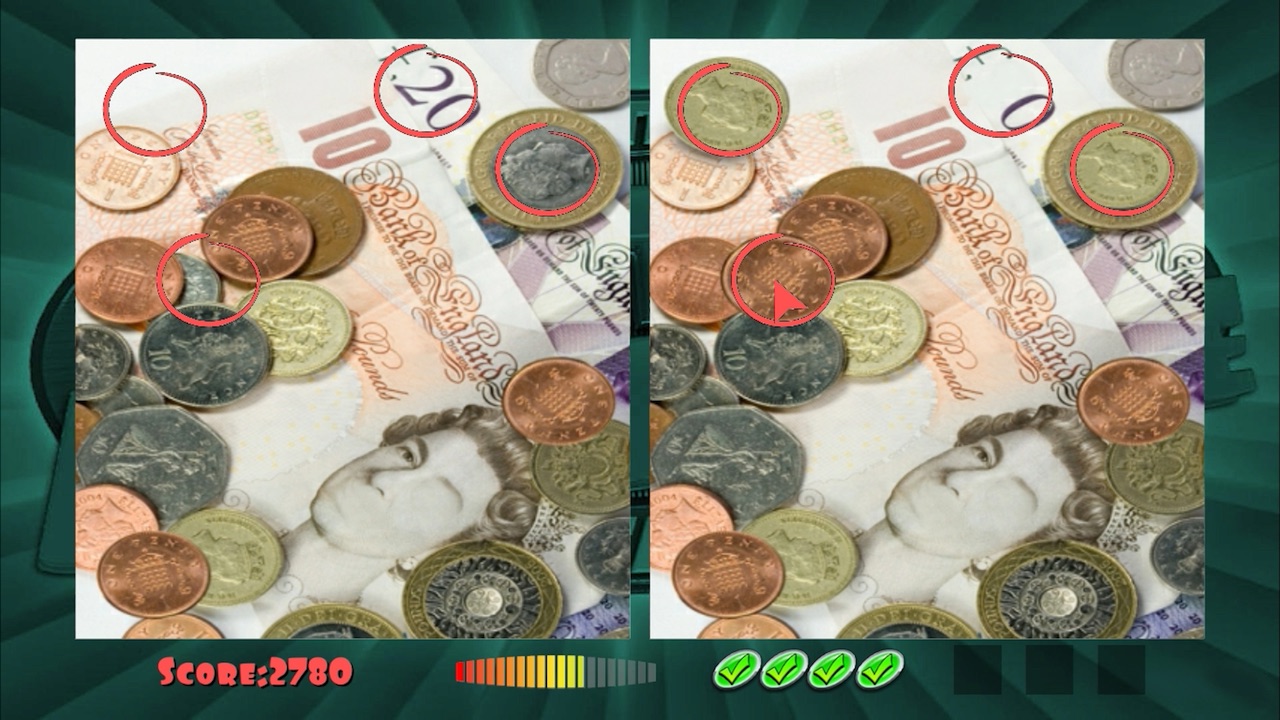 But my biggest buggery for Spot the Difference is that the game itself is wrong on occasion. I had an eye chart that had letters that were in the wrong directions, one on top of another. Click one, boom, difference found. Click the other and I got the horrific splat to tell me I’d missed. What the hell do you mean? It’s a completely different letter that was just in too close of circle proximity to the other difference. No matter what I did, it wouldn’t accept this was a difference, and so I just had to let the clock run down. As a game reviewer who just keeps moving forward, this affects me very little, but I’m trying to imagine the frustration of who this game is for. Someone who got a silly little title for their kids that wasn’t violent or scary, or an adult who just likes something simple to unwind with. But now I’ve got a moment where the game is a goddamn liar and I can’t move on and my high score streak is broken because of inaccurate detection. I’m going to be pissed, and rightfully so. You shouldn’t expect this to happen in any game, much less one on the heralded Switch.

Spot the Difference has all the hallmarks of a cheap, rushed game that was pushed out once people heard how well Switch software was selling and how happy indie devs were. This isn’t utter trash, but it is disappointing that the developers have had a year to create something and this is a game that’s now been released one year after the Switch’s launch. It would be worth a couple of bucks on a rainy afternoon, but not if it’s gonna be petulant and tell you you’re wrong. I hope the developers are reading this and others report the bugs too, because no one deserves a broken game, least of all when you’re trying to relax.