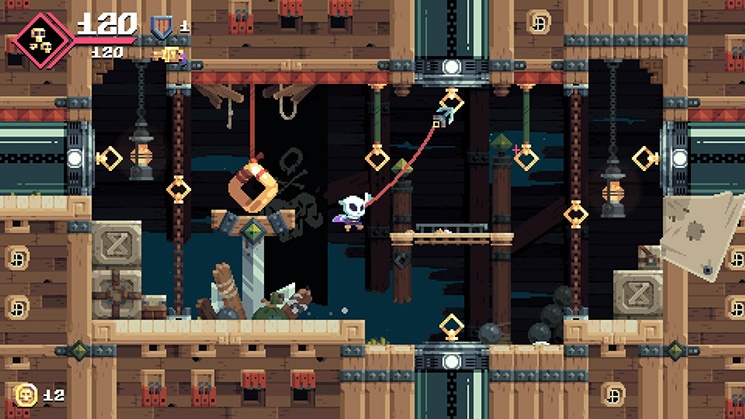 I instantly like roguelikes that allow for some sort of permanent progression–there are no ifs, ands, or buts about it. Flinthook is one such game and though it will beat you down every time you make the mistake of thinking you’re getting somewhere, you’ll keep at it because progression is a constant part of your failures. As a jaunty liberator of valuables, you have a level that you gain experience towards every raid. This means that even if you can’t manage to clear more than a few rooms each run, you’re able to net experience towards unlocking Perks for Flintlock that will make things easier. Easier being a relative measurement as this game is extremely challenging.

Before you challenge a bounty, you can equip Perks that do helpful things like increase your earned experience, shield Flinthook from damage, increase your over-all health, and multiply your score. Each Perk requires a number of Perk Points available on your Perk Meter to be able to be equipped and you can buy additional Perk Points in the Black Market shop with special currency earned by successfully completing raids–so long as you’re not currently engaged in a bounty.

Raids are quick, taking no more than a few minutes. They’re easy to pick up, play a few sessions, and put down–making it a good fit for the Switch’s handheld setup. There are a few different types of raids, which are indicated by a variety of “variant symbols.” Some will have more enemies or be riddled with traps, some will have more chances to shop, some will have more treasure, and some will just be huge labyrinths. There are a total of five bounties to attempt, each more harrowing than the last, and a series of raids must be completed in a gauntlet to unlock the boss fight for that bounty. For example: the very first bounty requires you to collect three Ghost Gems in order to face the little green runt pictured. Ghost Gems are collected from the final chest in the ship you’ve boarded, meaning that you’ll need to clear three ships before even seeing the boss for that bounty. 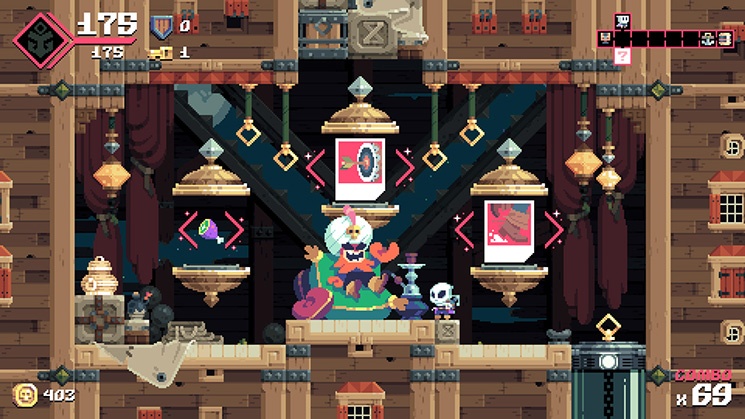 Luck plays a factor here because the RNG could assign you a slew of difficult ships that leave you half dead (or just dead) before you even reach the boss. Conversely, your run could be too easy, leaving you at a distinct disadvantage because you didn’t have the coin to buy the Perks you needed to succeed. Risk versus reward dictates that you find a balance between challenging yourself and knowing when to take the easy way out. Losing the boss fight means starting the gauntlet over, which can be incredibly frustrating–particularly if it’s a case of a great run gone wrong.
Raids are divided into rooms, each containing enemies and/or traps, or shops of some kind. Enemy rooms will lock and you must defeat every enemy within in order to unlock the exit, after which a chest will spawn which will reward you with doubloons and some health.
As far as gameplay is concerned, there’s a bit of a learning curve here as Flinthook’s movement revolves around usage of a hook, which can latch onto rings and send your character soaring across the screen. It can also be used to activate levers and pop barrier bubbles around enemies. All aiming is done via the left stick, which moves a little red reticle around the screen, and then you can shoot your gun using Y or the Quickhook using ZR in whatever direction you point the left stick. This takes some getting used to, particularly when you need to maneuver by hook and shoot at the same time, but the ability to shoot in every direction is well worth the effort. Flinthook can also jump with B and wall jump by pressing B and tilting the right stick towards the wall in question.  In addition to your pistol, you also have access to a single subweapon–the type of which will vary based on the perk you equip. Finally, you can also slow down time for a short period using Chronobelt, which is hotkeyed to ZL. Mostly, this will be used to pass through lasers that would be otherwise too molecularly dense to pass through, but in a pinch you can use it to slow enemy fire and make dodging easier.
Once you’ve gotten into the swing of things (no pun intended), Flinthook’s fluid control scheme feels fantastic. Using all of the above in tandem while trying to avoid traps and enemy fire can be overwhelming, however, and that’s one of my few complaints about the game. I often found that I took more damage as a result of how traps, which moved on a timer, were placed in proximity of one another than I did in actual combat. I also had difficulty figuring out the trajectory of the Quickhook shot, which resulted in taking damage from traps and enemies alike. This was a personal problem, of course, but it’s something to think about. 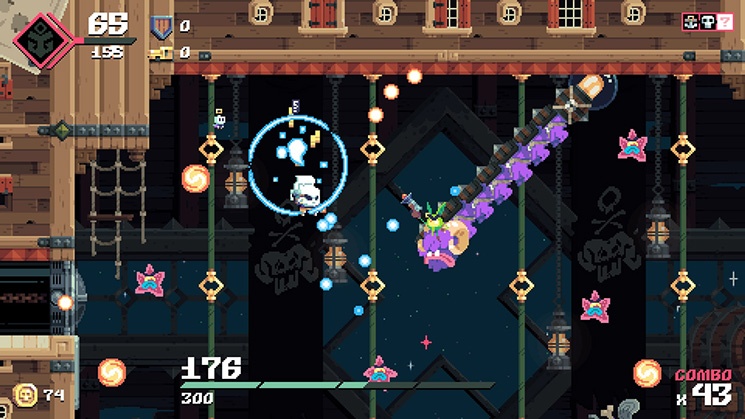 Flinthook has a limited amount of health and coming into contact with traps–spikes, lasers, saw blades, and the like–enemy fire, or the enemies themselves will decrease them. Once your HP reaches zero, it’s game over. You can find healing items in the chests awarded after completing an enemy room and buy them from vendors found throughout the ships. Perks bought with doubloons during the raid will only last the length of the raid and the doubloons you earn won’t carry over, so spend and experiment to your heart’s content. You’ll learn early on which Perks suit your play style and that’s definitely one of the game’s strengths.
If you defeat subsequent enemies while avoiding damage, you can build up a combo which will multiply the score you’re given at the end of a raid. This score affects the amount of experience you’re awarded with after you’ve completed a raid–whether successful or otherwise.
Presentation-wise, Flinthook’s bright pixel art style is cute and stylish. The animations are smooth and the little details and flourishes are simply a joy to see in motion. Assuming you have the time to appreciate them while you’re frantically shooting your pistol. The music is up tempo and adventurous, and it does well to make you feel like the fearless and untouchable pirate… even when you’re getting chewed up and spit out.

Flinthook is a great roguelike to add to an already flourishing collection of roguelikes on the Switch system. It’s not without its frustrations, but the very real sense of progression will keep you going even as you consider chucking your Joy-Con.