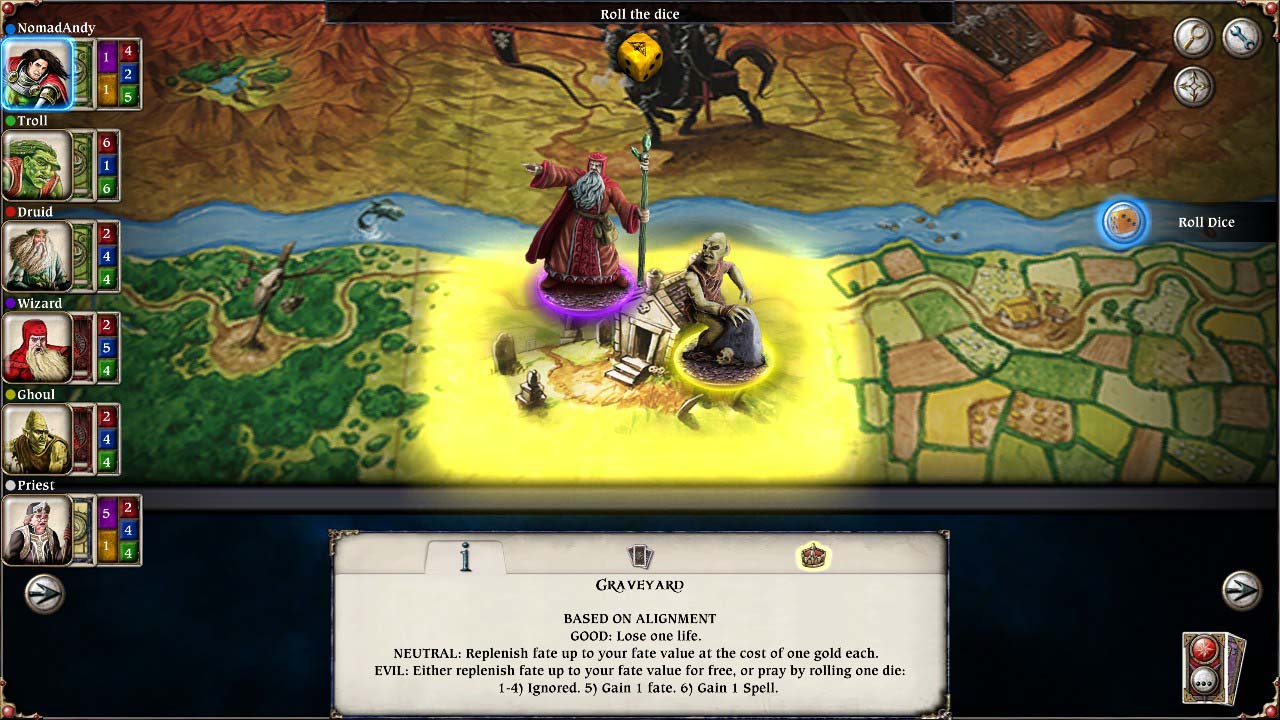 When you really think about it, the basic blueprint of a video game, especially those that revolve around role-playing, runs along the same premise as a good old-fashioned board game. After all, they all have characters, a quest of sorts, levelling systems and an end-goal. However, what about a board game that actually depicts the adventure of an heroic quest? It’s actually something that’s been around for many years now, especially within the dungeons & dragons world of Games Workshop. One such game can be traced back over thirty years, in fact all the way back to 1983, and yet, despite its age, is being re-imagined in a digital format to bring its adventuring style to returning warriors and heroes of new, as Talisman: Digital Edition ventures forth to release upon the Nintendo Switch.

Developed and published by Nomad Games, this officially licensed replication of Games Workshop’s iconic board game is brought to life with a faithful reproduction of the original base game, but also brings with it a wealth of expansions, cross-play multiplayer and local hot-seat fun for up to six players. The general premise of the game follows the same template as a role-playing adventure, in that you select a hero, traverse the land of Talisman, embark of quests, fight monsters or other players, overcome encounters and reach the ultimate goal of obtaining the Crown of Command; thus granting you full rule over the kingdom and the power to destroy all of your rivals.

Although primarily a board game, it’s also a style of gaming that plays in a very different way to the classic board games that you may, normally be accustomed too. As with any role-player, especially those of the table-top variety, there’s a huge element of luck that relies on the roll of the dice and the pick of a card amongst a huge variety of decks and expansions. There’s no set direction to your path, instead each roll of the dice presents you with choices, whether to fight or explore a new path, gamble with the cards that could bring fortune or bad luck and level up your character to face off against the challenges that await you on your quest. 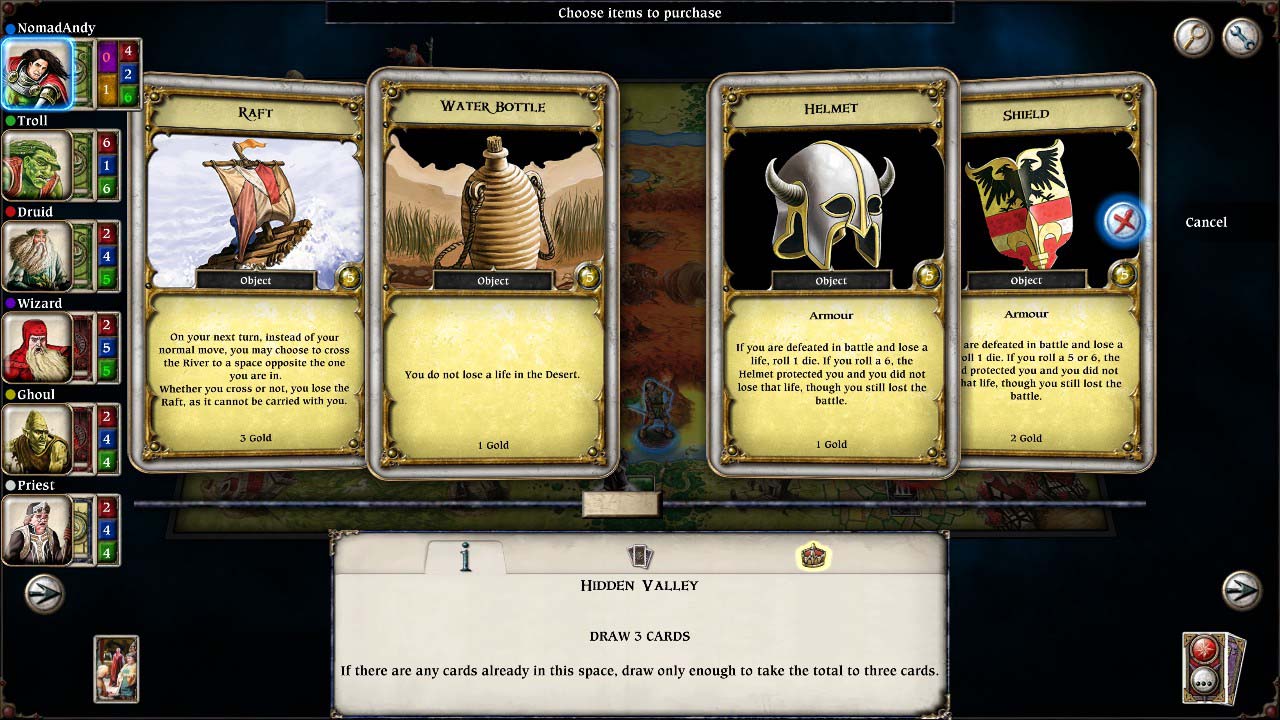 This digital edition of the game comes with the complete base game, as well as three expansions: The City, The Sacred Pool and The Frostmarch. These bring with them a whole selection of cards to add to your decks, new regions to expand the board and some new characters to play with. In fact, the wealth of content and options available to you within this game is simply staggering; even within its base component. However, the game also releases with extra DLC packs that can be purchased from the eShop; bringing the total number of characters available to a selection of near sixty varieties and adds literally hundreds of cards to you deck; if you want the full experience, just be prepared to pay handsomely for the reward. On its own though, this base pack holds more than enough to keep you entertained over the long-term.

In terms of gameplay, you can choose to play the standard game, or include any number of expansions to build upon its world. The overall objective is to reach the Crown of Command, an artefact that lies within the centre of the board. As your hero, you must venture around the edge of the board, levelling up your character and acquiring items until you can work your way inwards and eventually to the centre. However, it’s a hazardous journey with many encounters and events that can change the path of your journey. Each of the heroes you can select, a total of sixteen within this base pack, each contain their own specific stats and abilities; ensuring that each playthrough is never the same journey.

With each roll of the dice, you can select which playing square to land on. Whatever your choice, determines the events that unfold. Whether it be a battle, encounter or event, the outcome is decided with the roll of a die, or dice if your character allows the roll of two dice instead of one. Each card, character or monster contains a base value and the value of your dice is added to it. In battles, should your total be the highest then you win the bout. With events though, different die values can have differing effects. This creates a large element of luck, but also promotes a good sense of ‘anything can happen at any time’; making this a game of chance and fortune. 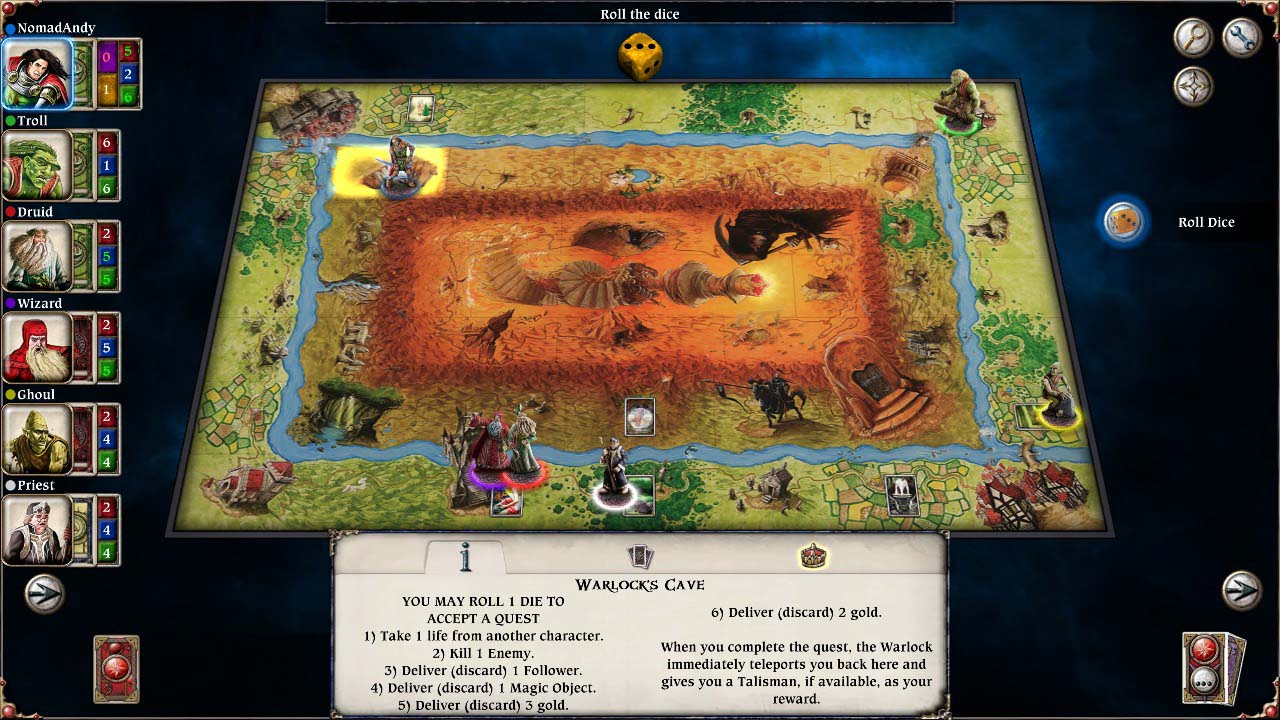 The overall presentation of the field of view, the board itself and the cards in play, present some nice artworks; something that can be admired in more detail with the ability to zoom into the board itself. In fact, the game hosts a wide variety of options that can help speed the game up and change the overall aesthetics, such as large fonts; something that is a god-send if playing on the Switch’s screen in handheld. You’ll find many of these options helpful, particularly in short-cuts within the way the game plays, as each game can last anywhere from an hour to three or four. With this in mind, this is a very slow paced game that needs time invested into it; not just in play-time, but also in learning all of its intricacies and styles of play. However, once you learn how it plays, it offers a very rewarding experience.

The AI opponents offer a good match up when playing solo and every game always presents a chance of winning or losing in a fair way. The game also caters for online multiplayer and local hot-seat play where you can pass the Switch around or simply play couch with a controller or joy-con each. With cross-play also included, finding games is never impossible, although it can take time to find a vacant room. The length of the game is also dramatically increased within multiplayer; making it important that you have the time to invest. On more than a couple of occasions, other players dropped out as the game went on. As far as its technicalities go though, every game I played ran smoothly and no bugs, hiccups or any form of lag was ever experienced.

Overall, Talisman: Digital Edition is a very accurate and faithful recreation of the classic board game. It could even be said that it is maybe too faithful, as its pacing can be decidedly slow in places. Despite this, the game presents an interesting journey that mimics the style of a role-player to good effect, although the emphasis of luck within the cards and dice can be frustrating at times and may be enough to put some players off. If you enjoy a good old board game, then this digital recreation is easily one of the best of its kind and offers something very different from your mainstream style of board-gaming. With a host of content and options, as well as paid and bundled DLC, there’s plenty here to keep you invested over the long-term and for that alone, makes this a journey that’s well worth undertaking.

Embark on a Role-Playing journey of old-school board gaming with the modernity of video-gaming within Talisman: Digital Edition.